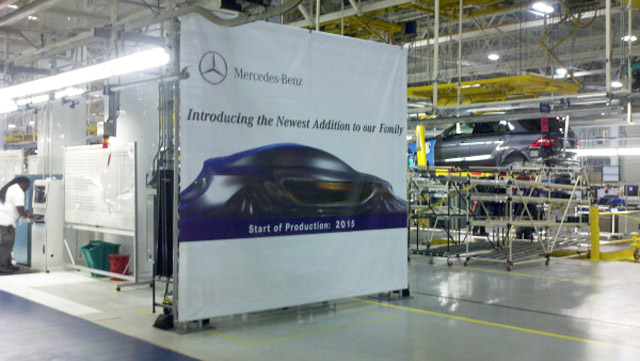 Late last week Mercedes-Benz announced that it would start building a new model at its U.S. plant in Tuscaloosa, Alabama, by 2015 though failed to mention exactly what it would be.

Now a leaked image allegedly taken during the announcement at the plant has surfaced online, indicating that the new model is likely to be a BMW X6 rivaling coupe-like crossover.

Such a vehicle from Mercedes-Benz has been rumored to be in the works for some time now, as is a version from Audi.

This image, uploaded to Twitter by @Dawn_Kent and first picked up by Jalponik, shows the silhouette of a tall-riding vehicle with a coupe like profile that’s very similar to the design of the BMW X6 and to a lesser extent the Acura ZDX.

According to previous reports, the new vehicle from Mercedes-Benz is to ride on the same platform as the latest 2012 Mercedes-Benz M-Class SUV and will likely be called a ‘MLC’ or possibly even ‘GLS’.

The new model will be targeted primarily at customers in China and the U.S. and feature the same engine lineup as the M-Class. An AMG version complete with a twin-turbocharged 5.5-liter V-8 is almost certain, as is a diesel-electric hybrid version.

For more details check out our previous report by clicking here.