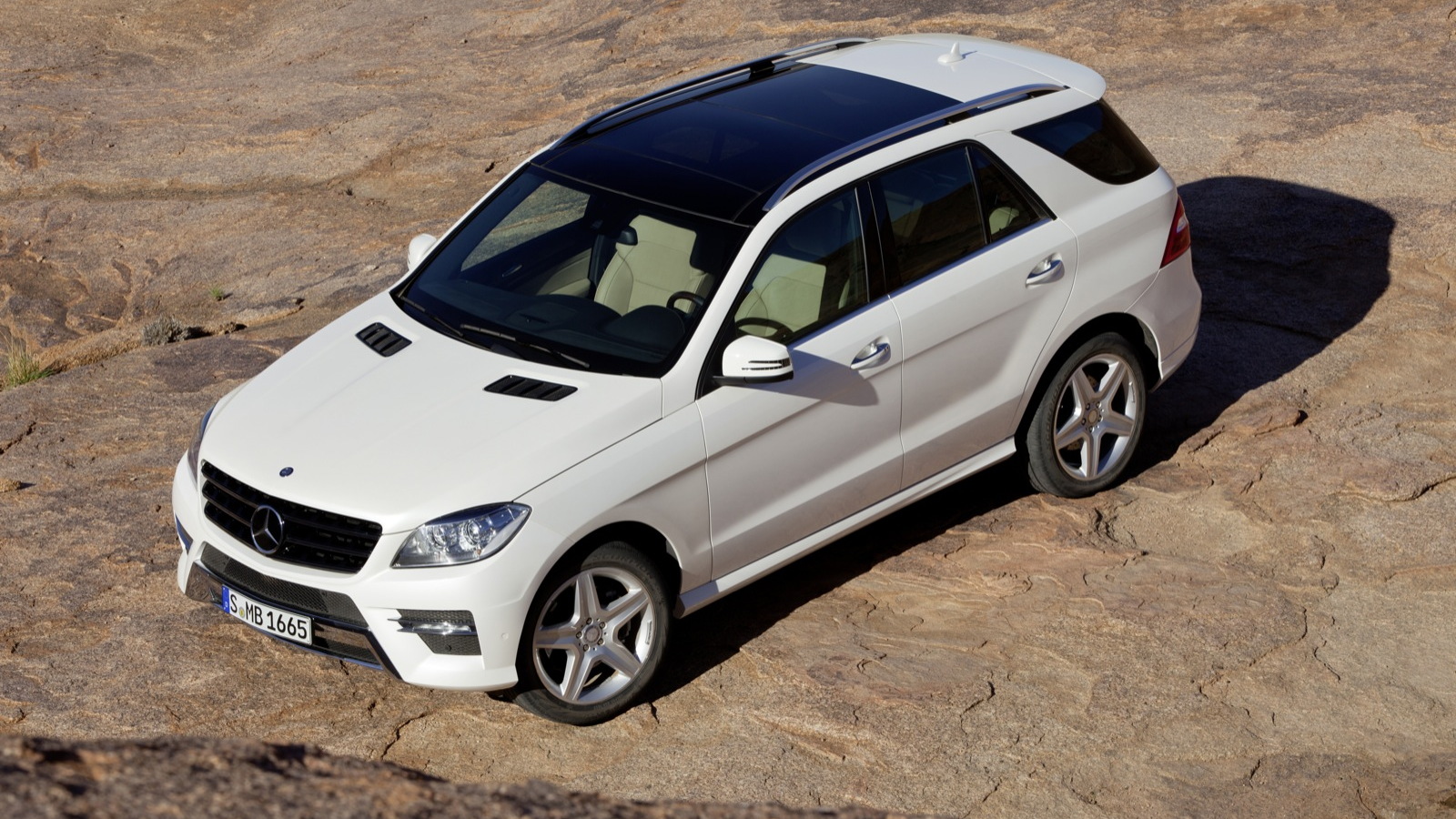 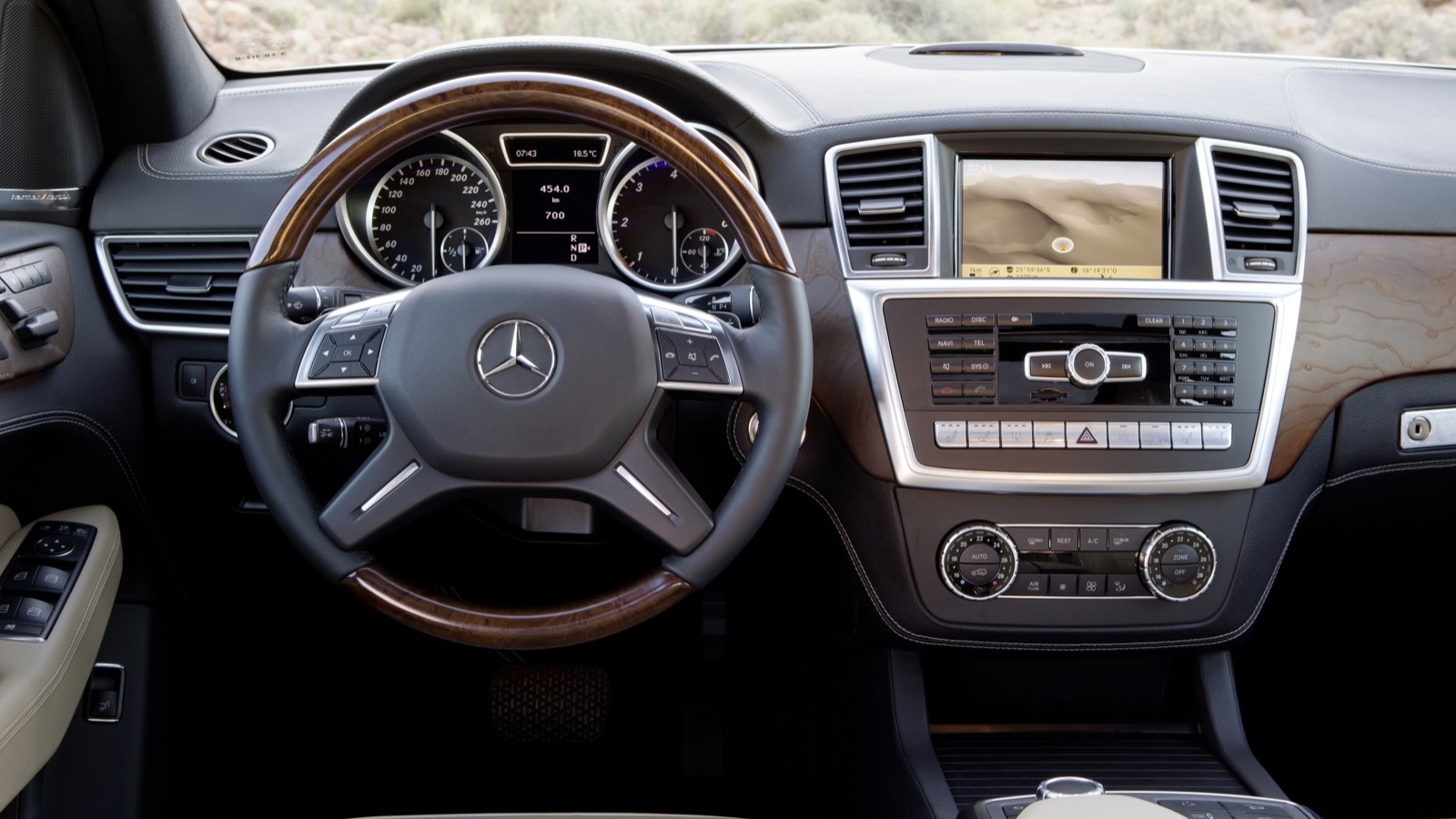 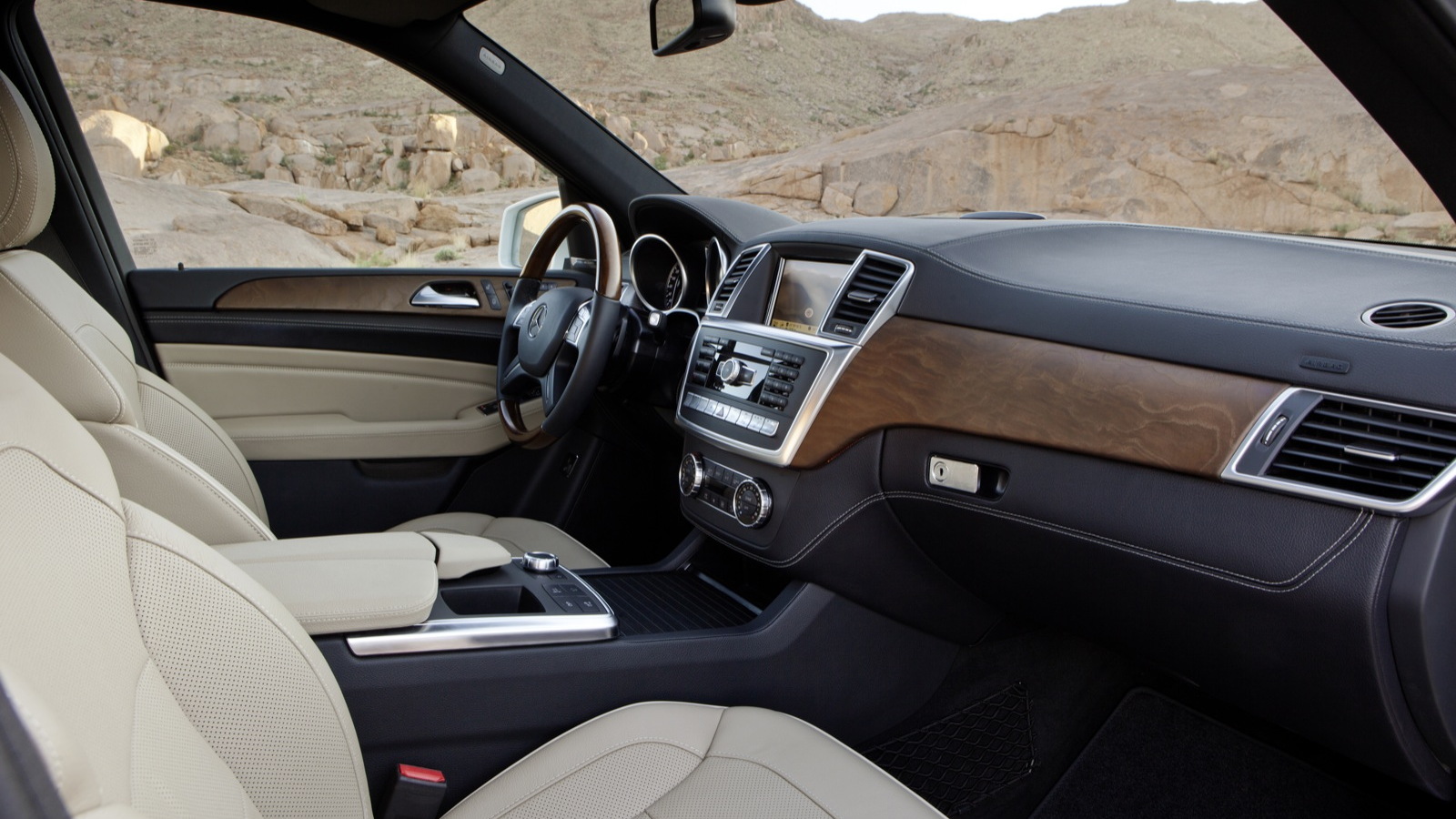 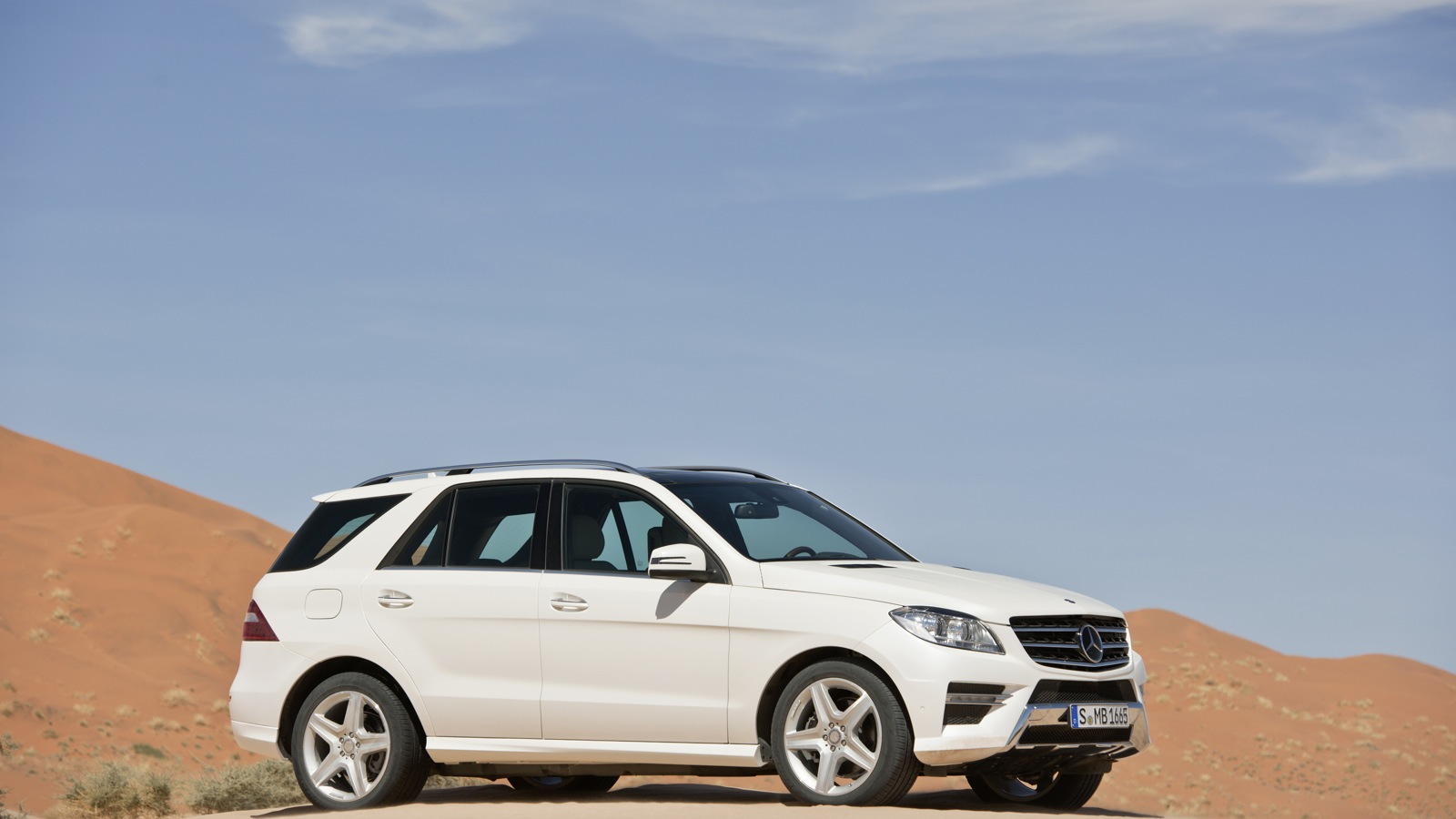 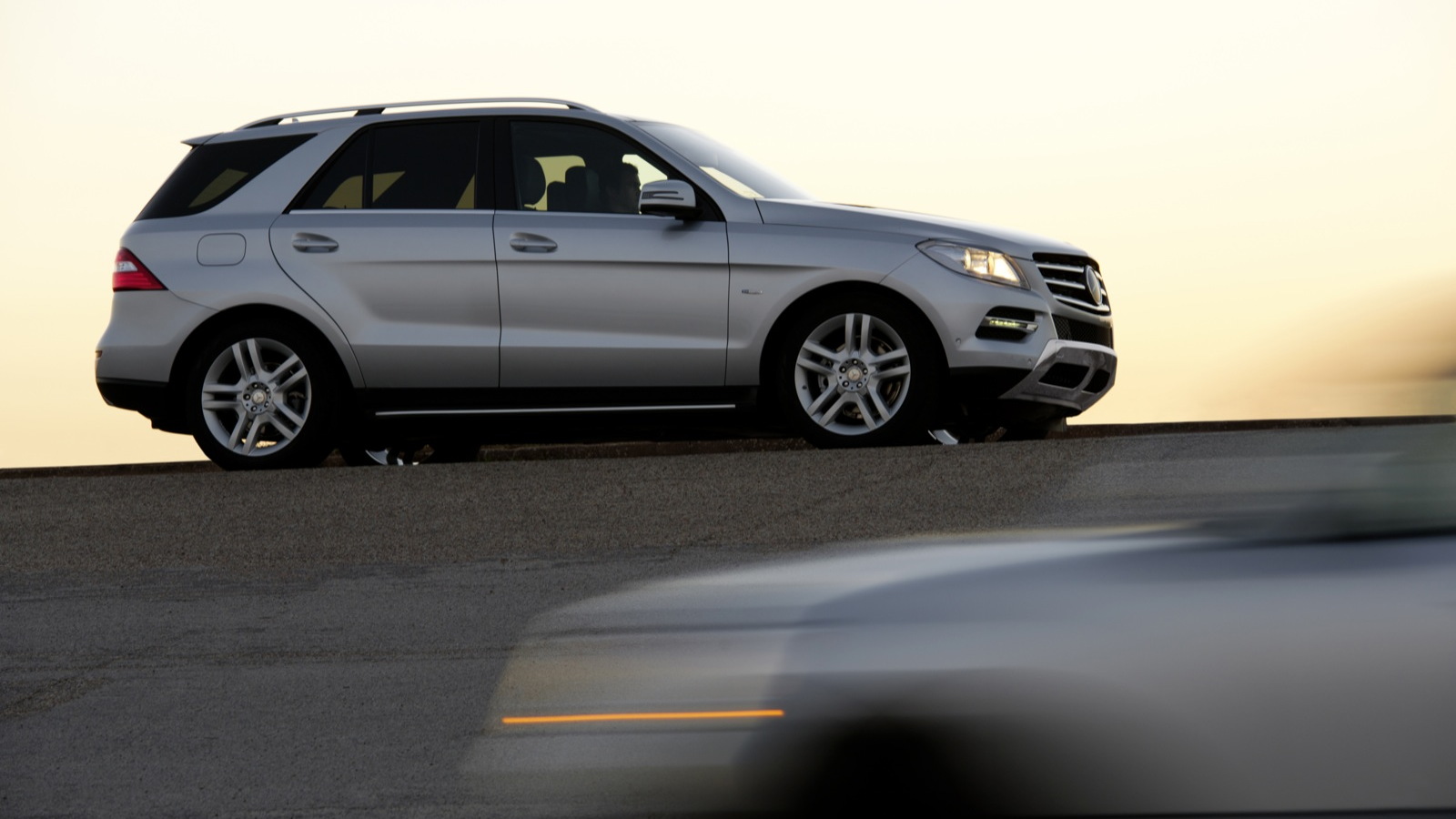 As we reported earlier in a first look at all-new photos, the all-new 2012 Mercedes-Benz M-Class looks poised to get a somewhat glossier, more finished appearance inside and out, along with better on-road performance. While we haven't yet driven the new M-CLass, we've now seen it in person and note that while the new ML is hardly revolutionary, it's a strong evolution, and much more handsome than the existing version—especially inside.

The proportions of the new 2012 Mercedes-Benz M-Class will be familiar and recognizable to those who've owned or shopped the model before. The wide, angled C-pillar is still there, as it's been since the model's original introduction for 1997, but there's a lot more grace and attention to detail, especially in the nicely detailed front end, where LED daytime running lamps and a chiseled, tightly shaped front airdam sets a more aggressive look. Alongside, the sheetmetal is at a glance both more aggressive yet still very graceful, with carved-out character lines and a shoulder line that continues all the way back to the flanks ending in the most traditional aspect of the design, the tail.

Inside, the instrument panel goes upscale, combining the horizontal orientation seen in recent Mercedes-Benz sedans with a so-called 'power dome' in the middle—punctuated by a gentle framework of three gently sculpted, swooping lines that all made cohesive with gently sculpted, swooping lines. Interior materials are substantially upgraded, the automaker says, with items like ventilated leather seats with diagonal stitching, and LED-based light is piped into the beltline of the instrument panel.

The actual interior layout and seating of the M-Class is much like that of the outgoing version, though backseat space has been significantly improved; the seatbacks there can now be adjusted for rake, and a new configuration combines a center armrest with the ski pass-through. One other important difference that drivers will note almost right away is that Mercedes-Benz has finally given in to longtime complaints and relocated the turn signal up to the 10-o'clock position, with the cruise-control stalk below it. There's also been an effort to better label switchgear.

In the U.S., the all-new M-Class will be powered by either a 302-horsepower, 3.5-liter gasoline V-6 (ML350), or a reworked 3.0-liter turbo-diesel V-6, making 240 horsepower and 455 pound-feet (ML350 Bluetec). Both engines will get a seven-speed automatic transmission, while the M-Class gets a host of fuel-saving measures like smart oil and water pumps and A/C compressor. However, a few of the most mileage-improving measures—engine start/stop, a stratified combustion system for the V-6, and an especially fuel-efficient new four-cylinder ML250 diesel—will remain exclusive to non-U.S. markets.

Sophisticated off-road system in the wings

4Matic all-wheel drive will, at least initially, be included in all U.S. models. And to get the most out of the system (and this ute's still very hardy construction), a new On & Offroad Package applies six different modes (Automatic, Offroad 1, Offroad 2, Winter, Sport, and Trailer) to the Airmatic air suspension system as well as the powertrain to suit specific terrain or needs. The package will boost ground clearance to 11.2 inches and fording depth to 23.6 inches, adding a two-stage transfer case, skid plates, and other trail extras. Mercedes at least additionally won't offer this package in the U.S. though—perhaps leaving room for it in the larger ML-based GL-Class.

The M-Class looks like it will offer some significant improvements on the road—both dynamically and in terms of noise, vibration, and harshness. With a new Dynamic Handling Package, active roll stabilization combined with the air suspension will improve the roll angle especially at higher speeds, giving it better agility on curvy roads. Diesels get a new aluminum transmission crossmember that helps quell vibrations, while all models get a magnesium alloy cockpit crossmember, acoustic windshield, and a more rigid front-end structure, plus improved insulation and sealing.

Nine standard airbags round out the safety package, including a kneebag for the driver and sidebags for the rear row. And the breakthrough Attention Assist and Pre Safe systems are now standard, with lane-keep and blind-spot assist features, Distronic cruise control, and a night-vision system all available.

Despite more safety equipment and better NVH, the M-Class is expected to hold the line on weight. That comes mainly thanks to the greater use of lightweight magnesium in structural members plus aluminum-alloy hood and fenders.

Final information about U.S. specification is yet to come, but the M-Class comes with a seven-inch screen and the COMAND interface front and center; the ML also steps up to the latest infotainment and navigation from the brand, including HD Radio, album cover art, Sirius traffic and weather, 3D city models, and area avoidance. Prices are expected to be about on par with the outgoing model.

Stay tuned for full driving impressions—as well as our take on how the new version stacks up against rivals like the BMW X5 and Audi Q7—as we hope to get behind the wheel of the all-new 2012 M-Class this summer.