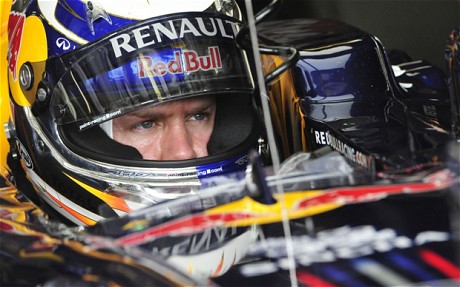 Vettel has a lead over his rivals that stands at 112 points, and with only 150 points remaining up for grabs in 2011, the Championship is looking very likely to be decided by the end of tomorrow.

In extreme heat and humidity at the Marina Bay Street Circuit today, Vettel managed to set the pace during most of the qualifying session.

And he will be flanked tomorrow by his Red Bull Racing team-mate Mark Webber, who is sure to keep third and fourth place qualifiers McLaren duo Jenson Button and Lewis Hamilton at bay.

Rounding out the top five is Ferrari driver Fernando Alonso.

Going into tomorrow's race, Sebastian Vettel maintains his clear lead in the 2011 Formula 1 Drivers’ Championship with 284 points, followed by Fernando Alonso in second spot with 172 points, and Jenson Button in third spot with 167 points.

Look out for our 2011 Formula 1 Singapore Grand Prix weather forecast early tomorrow, and stay tuned for our full race recap on Monday.