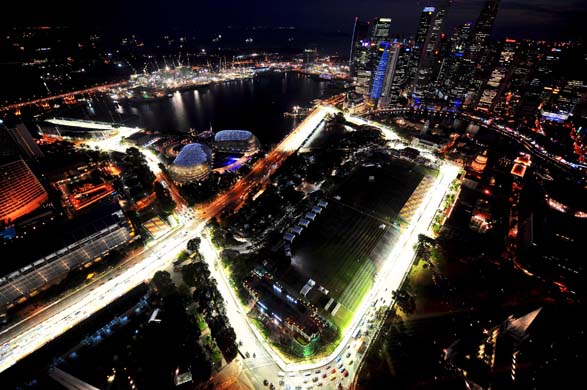 The 2011 Formula 1 Championship may all be over at the conclusion of the Singapore Grand Prix on Sunday.

Red Bull Racing star Sebastian Vettel has a lead over his rivals that stands at 112 points, and with only 150 points remaining up for grabs in 2011, the Championship is looking very likely to be decided in just a few days’ time.

However, there are many other reasons to be excited about the upcoming race.

Being F1’s only night race, the Singapore Grand Prix has a completely different ambiance to the day time races.

Visibility is only made possible by the 1,500 halogen lamps that line one side of the circuit, providing the drivers with a light reading of 3,000 lux. Some even wear tinted visors to reduce the glare.

The track is unusually wide for a street circuit, resulting in a couple of genuine overtaking places.

It’s also worth noting that this is the longest grand prix of the year; the 61 lap race comes in close to the two-hour time limit, which, when combined with the heat and humidity of the region, makes this one of the most grueling races of the year.

Going into qualifying tomorrow and Sunday's race, Sebastian Vettel maintains his clear lead in the 2011 Formula 1 Drivers’ Championship with 284 points, followed by Ferrari’s Fernando Alonso in second spot with 172 points, and McLaren’s Jenson Button in third spot with 167 points.

Stay tuned for our qualifying report tomorrow and weather forecast on Sunday, followed by a full race recap on Monday.