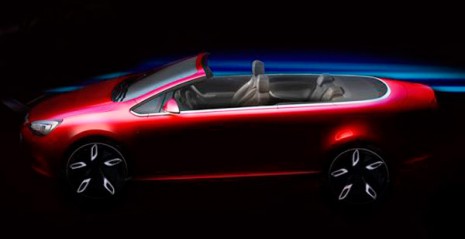 We’ve been reporting about a convertible version of the latest-generation Opel Astra sold in Europe since 2009 but news concerning the car never really heated up until last month when reports emerged suggesting that the car, along with the recently revealed Opel Astra GTC sports hatch, could be sold in the U.S. wearing a Buick badge.

Today we have an official teaser image of the new Opel Astra Cabrio, which is scheduled to go on sale in Europe in about 18 months.

The car is expected to feature unique styling as well as a conventional soft-top roof in lieu of the previous model’s folding hard-top. This latest teaser also confirms that a four-seat layout is planned.

Power will come from the same range of four-cylinder gasoline and diesel engines offered in the standard Astra, and sadly, a high-performance OPC model is unlikely to be produced. This means that the most powerful model is likely to feature a 180 horsepower turbocharged 1.6-liter engine.

The Astra Cabrio should however adopt the sophisticated front suspension from the 325 horsepower Insignia OPC, featuring Opel’s HiPerStrut (High Performance Strut), as well as a Watt’s link rear axle, just like its Astra GTC sibling.

The HiPerStrut uses the existing attachment points from the standard Astra, but has a reduced kingpin inclination and a shorter spindle length. This reduces levels of torque-steer in the front-wheel drive hatch, but also improves grip, steering precision and feedback. You might recall that a similar setup is destined for the Buick Regal GS.