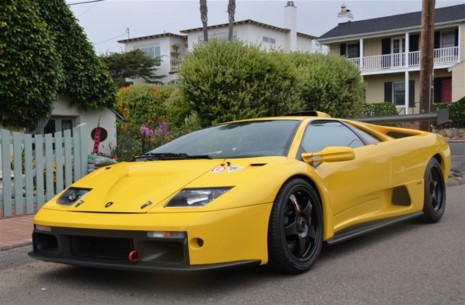 Lamborghini ownership is already an exclusive club; but a Diablo GT-R is an even rarer find. Rarer still is one that has never been raced.

The GT-R is a track-ready version of the Europe-only Diablo GT. Thirty of these cars were built in 1999 and 2000, with only two or three having never seen track action.

Making about 600 horsepower, the GT-R has a full roll cage and fire suppression system, pneumatic jacks, and a free-flowing exhaust. The transmission is a five-speed manual.

Symbolic Motors, the dealer selling the car, says there are fewer than 800 kilometers (780 miles, to be precise) on the odometer.

That price also speaks to the rarity of the car, and it's likely that the buyer will garage the car instead of driving it.