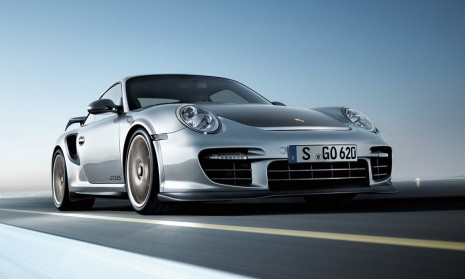 Progress is a funny thing. For example, in the 80s Porsche introduced the 959, a special, limited edition supercar that was the embodiment of everything that Porsche knew how to do. It was blisteringly fast, all-wheel drive, with a water-cooled and turbocharged flat-six that put out 444 horsepower. Journalists at the time drooled and slobbered over it, and understandably so, considering its incredibly high price (for the '80s) of $225,000. Then, about 10 years later, the 996 version of the 911 Turbo beat the pants off the 959, and for considerably less.

It's happening again. The Carrera GT was the penultimate Porsche just six years ago, the fastest and most powerful car the company had made for the street. But it, too has been eclipsed by a far less expensive version of the 911: The 2012 Porsche 911 GT2 RS. With 620 horsepower, it's the most powerful production car the company has ever made. And it outruns the Carrera GT at the Nurburgring.

To say that the $246,000 911 GT2 RS is worth every penny is an understatement. Granted, this isn't the Porsche you'd take to the golf club, but if you prefer driving apexes than driving links, then this is the car you want. It's so exciting in fact that Porsche has released a video of the first 20 owners of the new 911 GT2 RS to take delivery of their cars last month at the El Toro air base in Orange County, California. With plenty of footage of the cars on track, Porsche's manager of high performance cars Andreas Preuninger talks about development of the GT2 RS, and how none other than Walter Röhrl urged Porsche to build the car after driving a developmental prototype. It's a good story and some good footage, and worth 4 minutes of your time.

Oh, and if you're one of the 20 lucky owners in this video, you should know that the rest of us kind of hate you a little bit. But, y'know, in a good way.