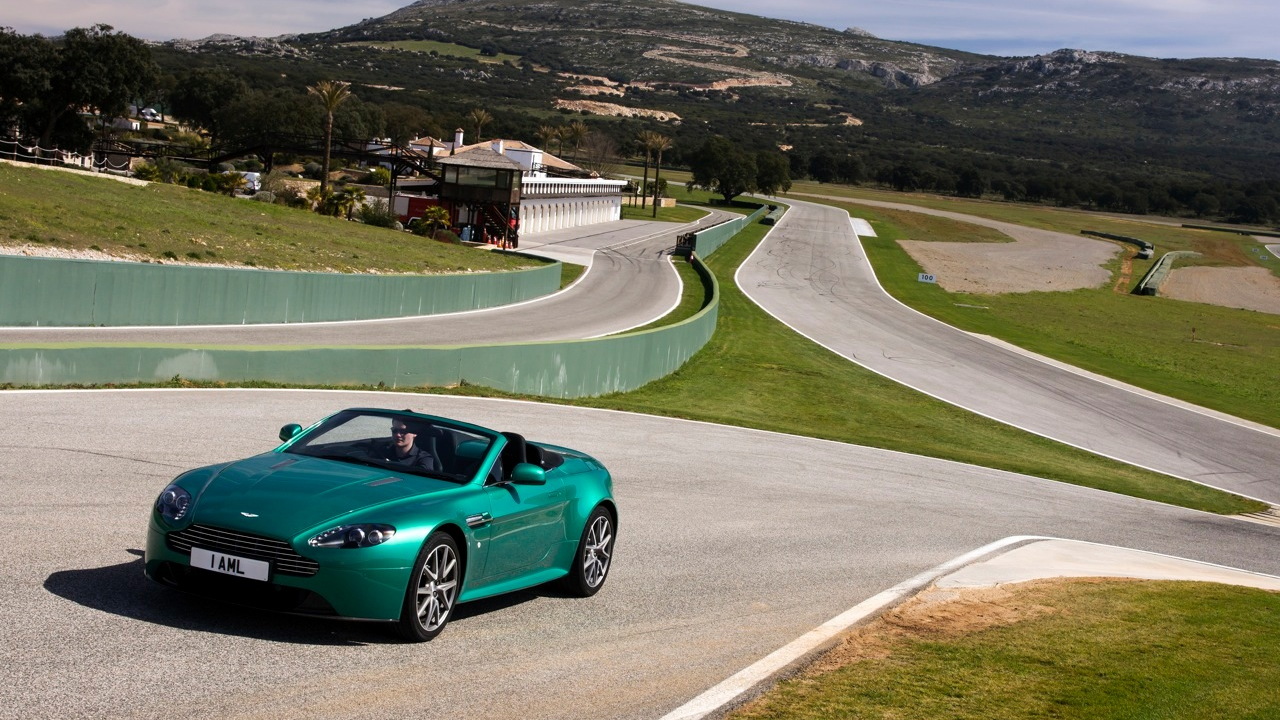 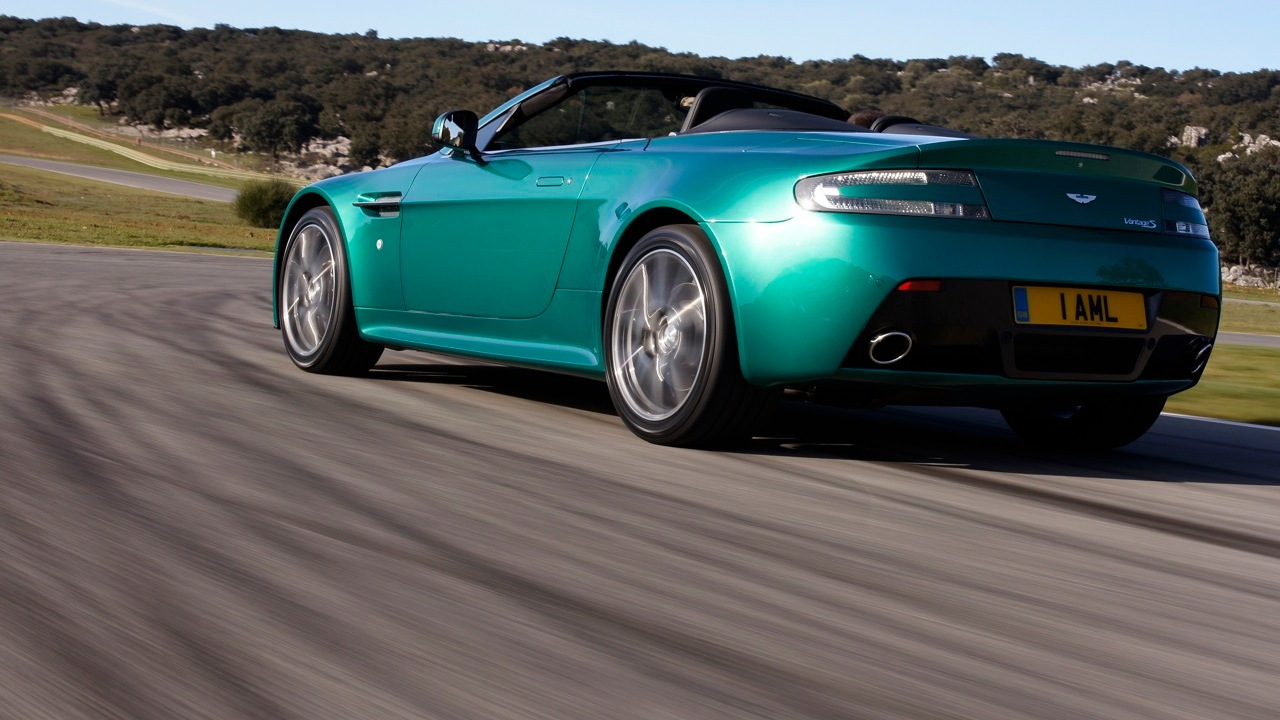 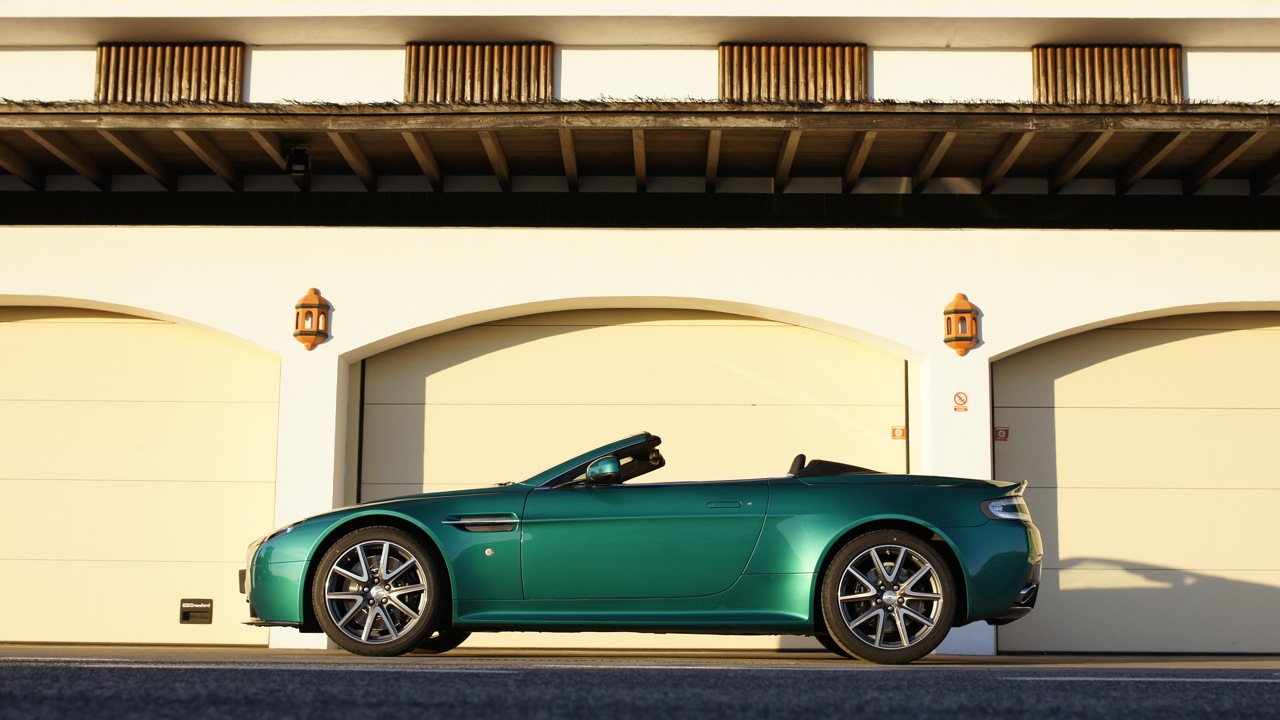 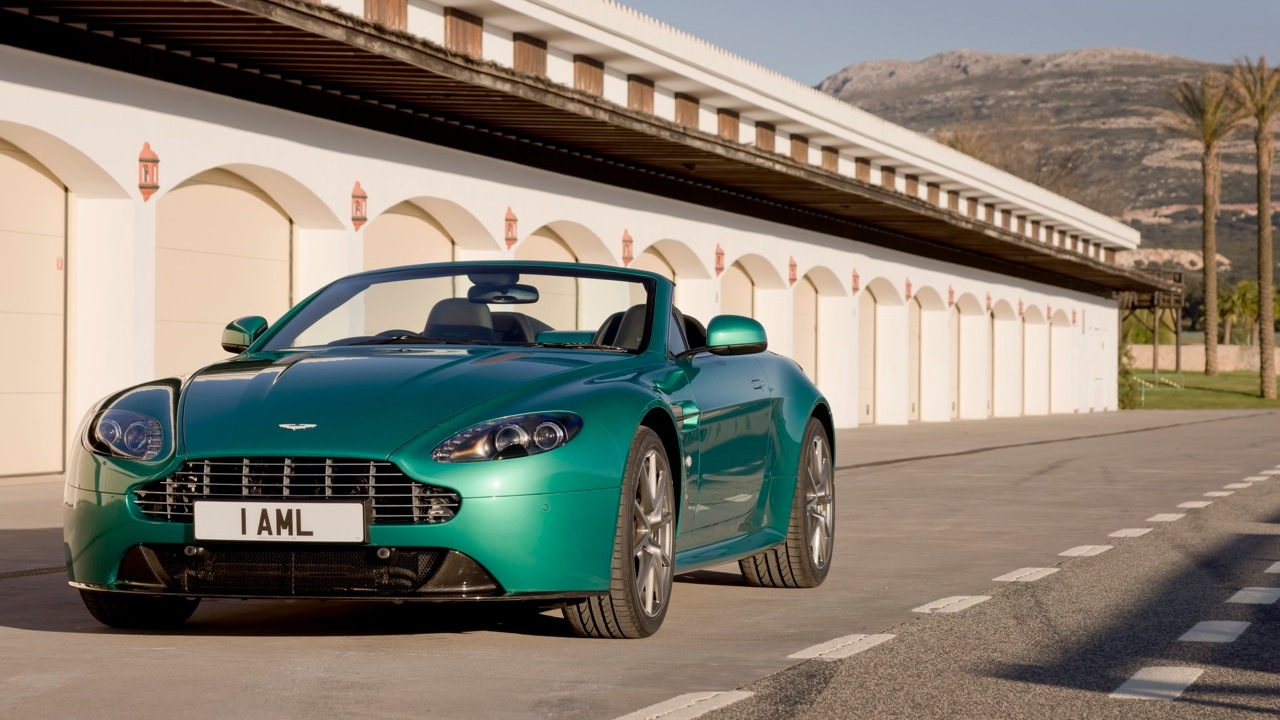 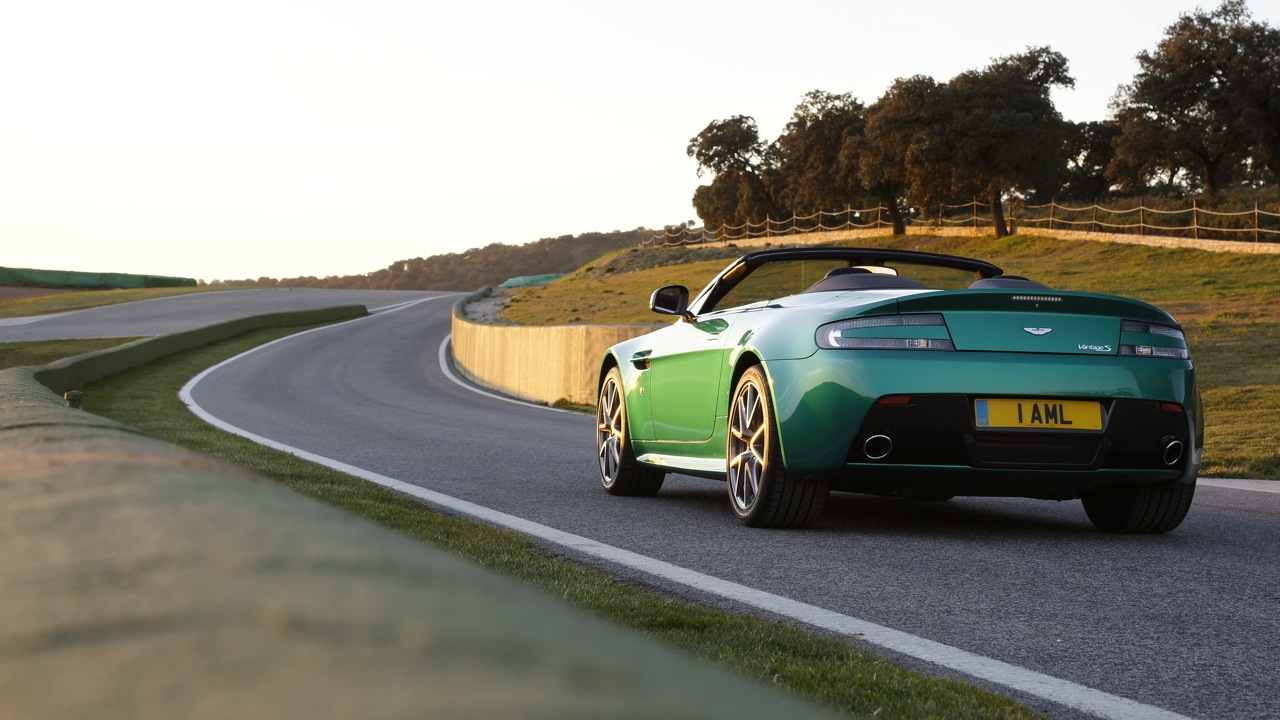 The Geneva Motor Show is over, but the craptastic weather's following the whiny, overly privileged herd of automotive journos stampeding south for assorted first drives. Porsche's Cayman R drive meets up with pouring rain in Mallorca; by the time we're in the Canary Islands for a two-parter with the new Mercedes C-Class and SLK, it's frigid and windy.

The skies are going an even deeper shade of grey as I rebound once more off the Malaga airport, to southern Spain, for a first drive in the Aston Martin Vantage S and one in their all-new offering, the Virage. (More on that on March 21st.)

Then it hails. And then, it snows.

On paper, I clearly shivered more energy away than I could possibly pump through my veins in the form of caffeine, but it didn't matter once we pulled up in a fleet of black minivans to the gate at Ascari, a kind of adult Disneyland for speed addicts of the socially acceptable kind. Aston rolled open the paddock doors, and fired up the Vantage S' impeccably accented exhaust note. And damn if I didn't wake right up, brushing off epic jetlag to pile into a right-hand-drive roadster for my open-track laps.

The proper name is Ascari Race Resort, by the way, but in this tight-knit, well-heeled community it goes by its first name only. Drawing near its 10th anniversary, Ascari's a privateer track with slate-floored showers, a pretty fabulous restaurant, and staggering views of the mountains near Ronda, the town that gave birth to the bullfight. This isn't Nelson Ledges, or worse, if worse exists.

The track's a keen exercise for even the most talented. Ascari's a 3.5-mile-long, greatest-hits compilation of torturous esses, blurred-out straightaways that all but dead-end into 90-degree turns, and downhill grades that flip-flop between camber changes. In the lingo, it's a "technical" track--in the way neuroendocrinology is a technical expertise.

You can look very stupid here, very easily, but the Vantage S does its best to dust off your driving skills and showcase them in a most favorable, LED-intense light. The S slots above the V8 Vantage, what with its subtle tweaks and automated-manual transmission, but below its truly track-ready cousin, the GT4, and the monster V12 Vantage.

It has a name in common, and it also does what just about every other Aston Martin does with effortlessness. It soaks up attention with precise and exquisite details. It colors its grand-touring presentation with vivid, phenomenal roadgoing poise. And to a one, it makes Spain's aging sidewalk quarterbacks yell out: camio de Bond!

It's totally worth rolling top-down, even with blustery wind sawing at your eardrums, to hear those words. Worth sweating out equal amounts of cured ham and rioja, yet a week later. Worth a coach trip on Irish metal to Britain's least-sexy airport, to sleep in your clothes in a freezing room for six hours before you get on another plane bound for the busiest airport in the world.

We've had a great run in nearly every flavor of Aston in the past year and change. MotorAuthority kicked off 2010 with a late-winter run above Malibu in a DBS Convertible, and then descended on Valencia for a drive in the gorgeous Aston Rapide. Over the summer we parlayed an semi-free afternoon into a first drive of the V12 Vantage.

In the Vantage S, you're pulling the Aston ship into something more closely approaching reality-- a reality that includes the likes of the Maserati GranTurismo, Jaguar XKR and some flavors of the Porsche 911. On the outside, maybe the Ferrari California. That's an inside straight of beatific proportions, every car with its own inescapable hook, whether it emanates from under the hood or from a rear quarter. From about $138,000 to $151,000 for coupe and roadster versions, the Vantage S sweetly tunes up the base car to tighter track tolerance, while it's still wholly happy on almost every other surface.

From all visual takes and angles, it's only lightly touched up, not that it needed any more. The Vantage's faultless taste registers in nearly every detail, from the little upkicks at the end of the rear quarter windows to the arrow-pierced fender vents that probably kicked off the now-cliched craze. Okay, so the swap-outs for the S aren't all that subtle: how about carbon-fiber diffusers, 19-inch 10-spoke wheels, and bigger skirts and sills? They're still more sensitively appliqued than the visual 2x4 whacks you'd absorb from any wide-body 911. The embroidered logos on the seats and woven-metal trim inside are downright spare, if you've sniffed the spoiled meat that passes for tuner steak.

The engine only splits with the Vantage party line in small ways. The exhaust system opens up at 4000 rpm to bypass its more constricting low-rpm breathing passages, and the fine tune of Aston's throttle controls in Sport mode has been polished up. The net is 430 horsepower at 7300 rpm, and 361 pound-feet of torque up at 5000 rpm--good for a top speed of 189 mph, Aston claims, and a 0-60 mph time of about 4.5 seconds.

A single-clutch, automated-manual transmission with seven forward speeds brings the car to life when you press the D button on the dash--better yet, the S button--and pull one of the pair of metal paddles behind the steering wheel forward. Aston says the SportShift II is a lighter-impact, less-complex solution than a dual-clutch transmission, but faster than its usual SportShift automatic. Tied in tandem, the rear-driver's throaty V-8 and gearbox are rated at 14/21 mpg, decent for a near-exotic though off the Porsche 911's amazingly green marks by a fair amount.

The updates to the suspension, wheel-and-tire, and braking systems hone the Vantage S's handling into more of a killer weapon. The steering ratio screws down from 17:1 to 15:1. The shocks and springs are tauter, and the Potenza-shod rear wheels have grown to 10 inches wide. Six-piston front brake calipers clamp down on larger discs in front, backed up by four-piston units on the rear wheels. The stability control gets as permissive as you want--and you'll want to choose your yaw rates wisely as you drill deep into Ascari's more Gordian road knots.

You'll lose the empire if you choose the easiest way through those knots, because Ascari forgives bad drivers less than Zeus would. Those were lightning bolts the night before, after all, but the track's dry. A stiff, steady 20-mph wind will do that.

Think it's daunting? Then sidle up to the driver's door, with an XXL helmet almost sitting on your shoulders, and try to fold into an electric-blue Vantage S coupe with hard-formed seats we won't get in the U.S. versions. It's impossible, at least with my inseam. I feel a neck disc flex--oh hai, C3, and maybe C4, too--and decide it's probably better for consciousness if I swing open the roof on the viridian roadster in the next parking spot over. Hey, it's also right-hand drive. Perfect, marvelous. I wanted to get that much closer to the curbs, anyway.

With little prep time, I press the Start button to life--if it were only that easy at 7 a.m., I can't help but think--and swing out of pit lane with my huge, white head bobbling in the jet stream a good three inches above the windshield header. And it's on, oh, it's definitely on. Cone 1 cues up a downhill double-apex that slaps you into shocking reality, as you push deeper into the throttle and let the Vantage flatten out into speed-building neutrality. Curb after curb, cone after cone, Ascari has 26 turns equally split between left and rights, and two of them will remain hypotheses even after the first 20 minutes of lap time have been erased.

While I figure out the easier corners, the Vantage S' backing track begs to be let off its chain. No one does balanced aggression like this: it's a throbby, ripe exhaust note marbled with rich metallic veins, perfect from intake to exhaust. Blipping it against the rev limiter lets it whuffle off its peak shriek for a second or two, but you really want to let it run open through its sweet spot, from about 4000 rpm to 7000 rpm. It just howls, like you want anything under your control to howl with the right touch.

And it's relatively easy to bring to a boil. The gearbox works perfectly in sync with the Vantage's roadgoing personality, which means it's a little less quick to shift than a dedicated dual-clutch transmission. The payoff comes in smoothness. Even when it's in Sport mode, this automated manual never hits the janky rough patches of those old BMW SMG units, and it's probably just a touch more suave in action than the Audi r-tronic and Gallardo semi-manual boxes. It couldn't be much faster, but a dual-clutch could cut shift times considerably--and you need every tenth of a second here, between Ascari's constant curb-to-curb pummeling. Just like you need its limited-slip diff to keep everything in balance when the inside rear wheel hunts deep in a corner under a fully compressed suspension, while the outside rear wheel checks its email and updates its Facebook status.

The Vantage S doesn't want for anything mechanical, especially for tire meat, but it's still more overtly a GT. You can tell how the front end lifts a little at triple-digit speeds, how the slight body roll that keeps it pliant on the street demands a half-moment of patience to take a set on the track before it sounds the all-clear. But the brakes stay alive, lap after lap, up to the challenge that the big, rorty V-8 throws down, corner after corner.

Laps add up slowly at Ascari. They're long loops, at almost 3.4 miles apiece, and cooling the car down gives you plenty of time to smack your forehead at turn 6's obvious orthodoxy--hit the middle before you apex, or you're slow, or you're off-road--or how the esses at 12 and 13 really want second gear. If your head's even further in the clouds, you can marvel at how the Vantage has more different kinds of body pieces than almost any car on the planet (the aluminum frame wears magnesium, composite and steel panels). Or you can tally up how much the bespoke car you're ordering in your dreams will cost, once you've tagged up the sheet with front and rear parking sensors, the fabulous 1000-watt Bang & Olufsen sound system and its rising-mushroom tweeters, and maybe opted out of one of the least user-friendly nav systems you can find.

Or if you're like us, you gently ignore the call to cool down and draw this out as long as you can, as fast as you can, until the pit lane reappears a couple of miles down a very kinky road.

Checkered flag, my ass. You can just hang for a few.