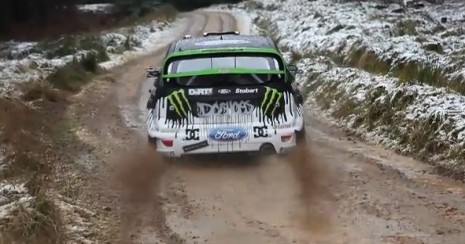 Ken Block launches during practice at the M-Sport proving grounds

Treacherous conditions are the name of the game in the Wales Rally Great Britain, so it's no surprise perhaps that Ken Block managed to roll his race ride while practicing in muddy, snowy conditions at the M-Sport proving grounds for the rally this week. On the other hand, the fact that it's Ken Block makes it unsurprising too.

We're not saying Block isn't a talented driver, but he does have a propensity for stuffing cars into heavily forested areas, getting them upside down, and generally breaking stuff. It's probably due to the same gene that lets him do his Gymkhana thing so well.

Whatever your position on Block, however, you'll enjoy the video below, as it contains all the essential ingredients: speed, danger, and bent metal.