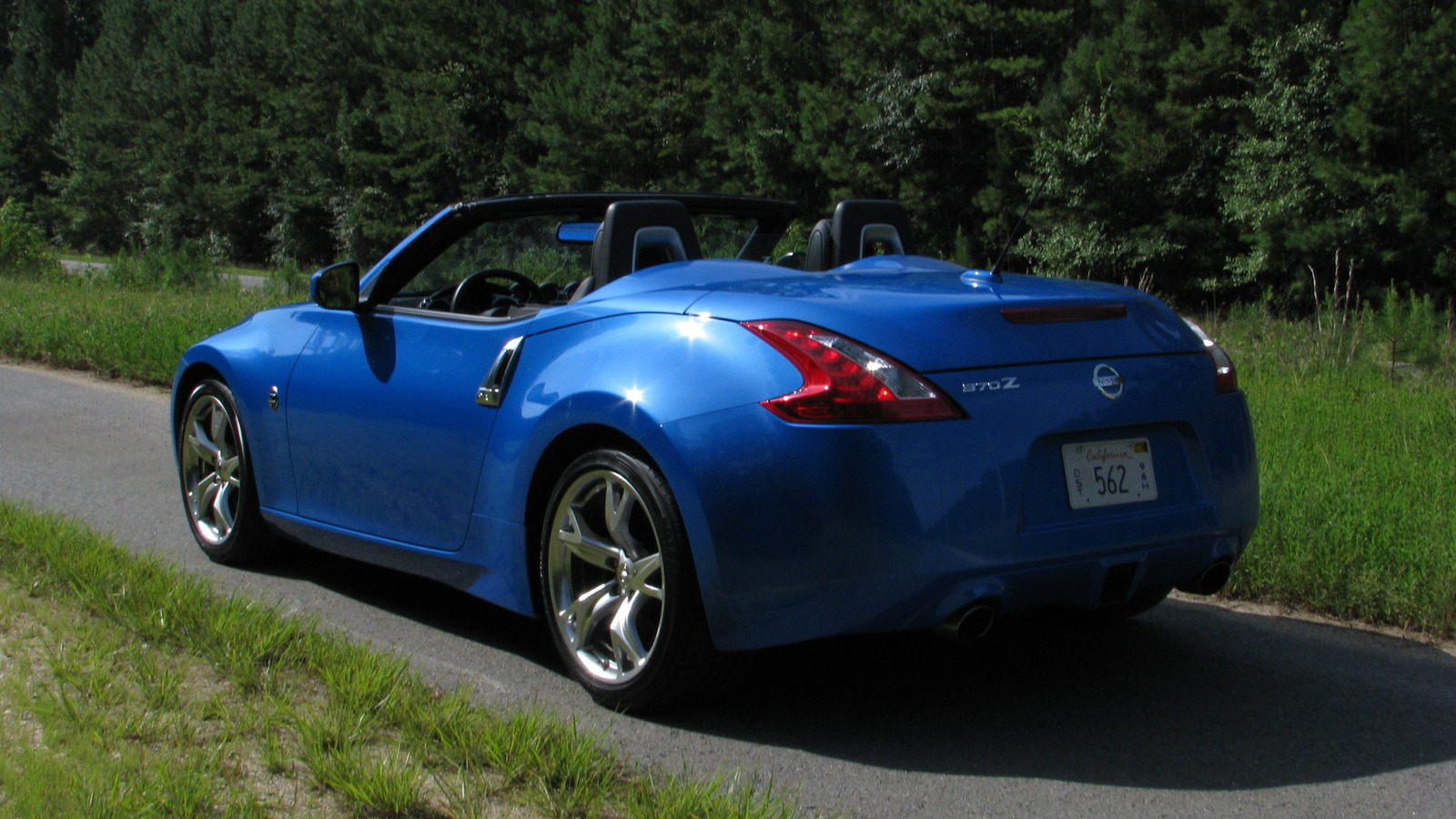 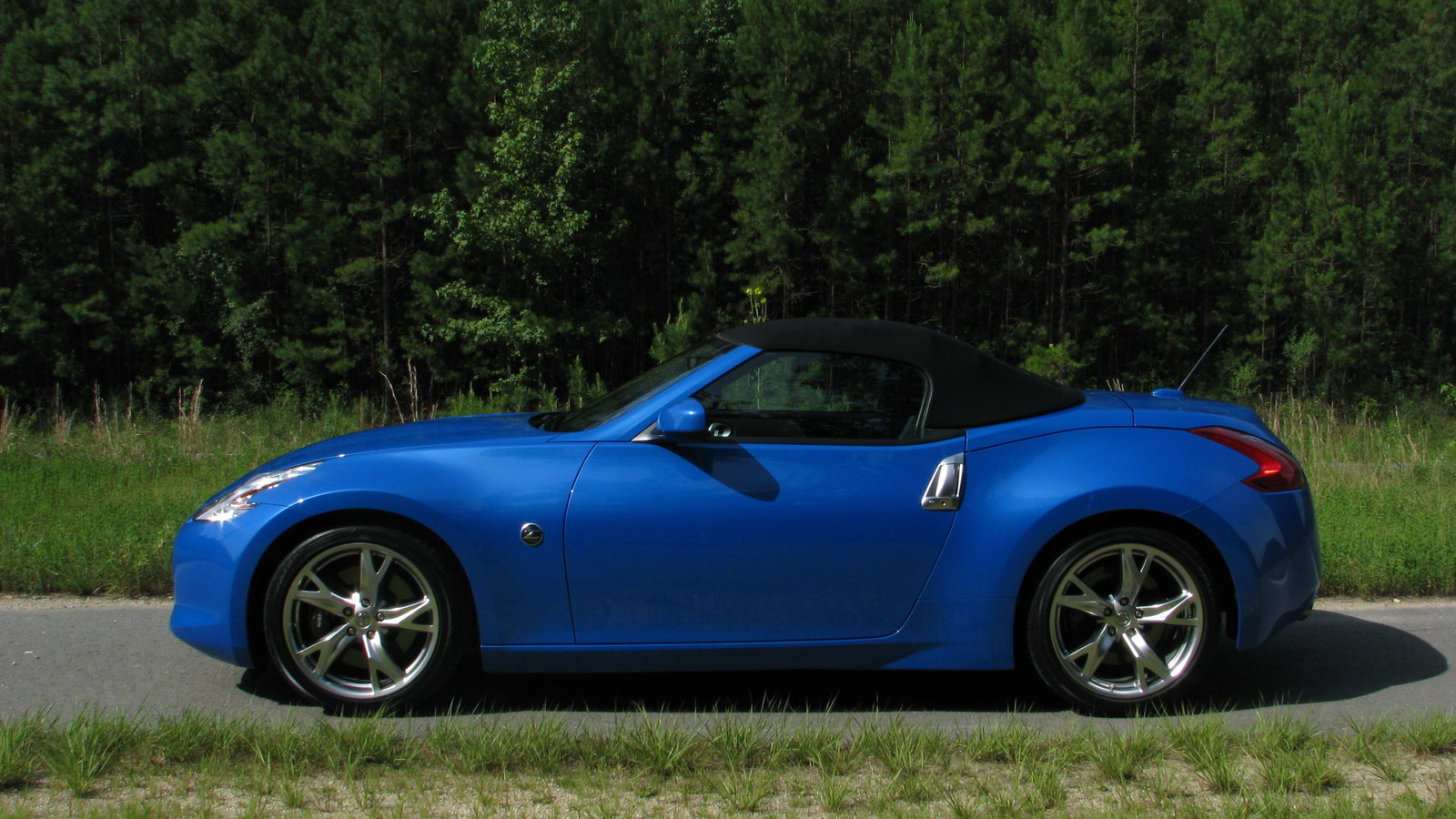 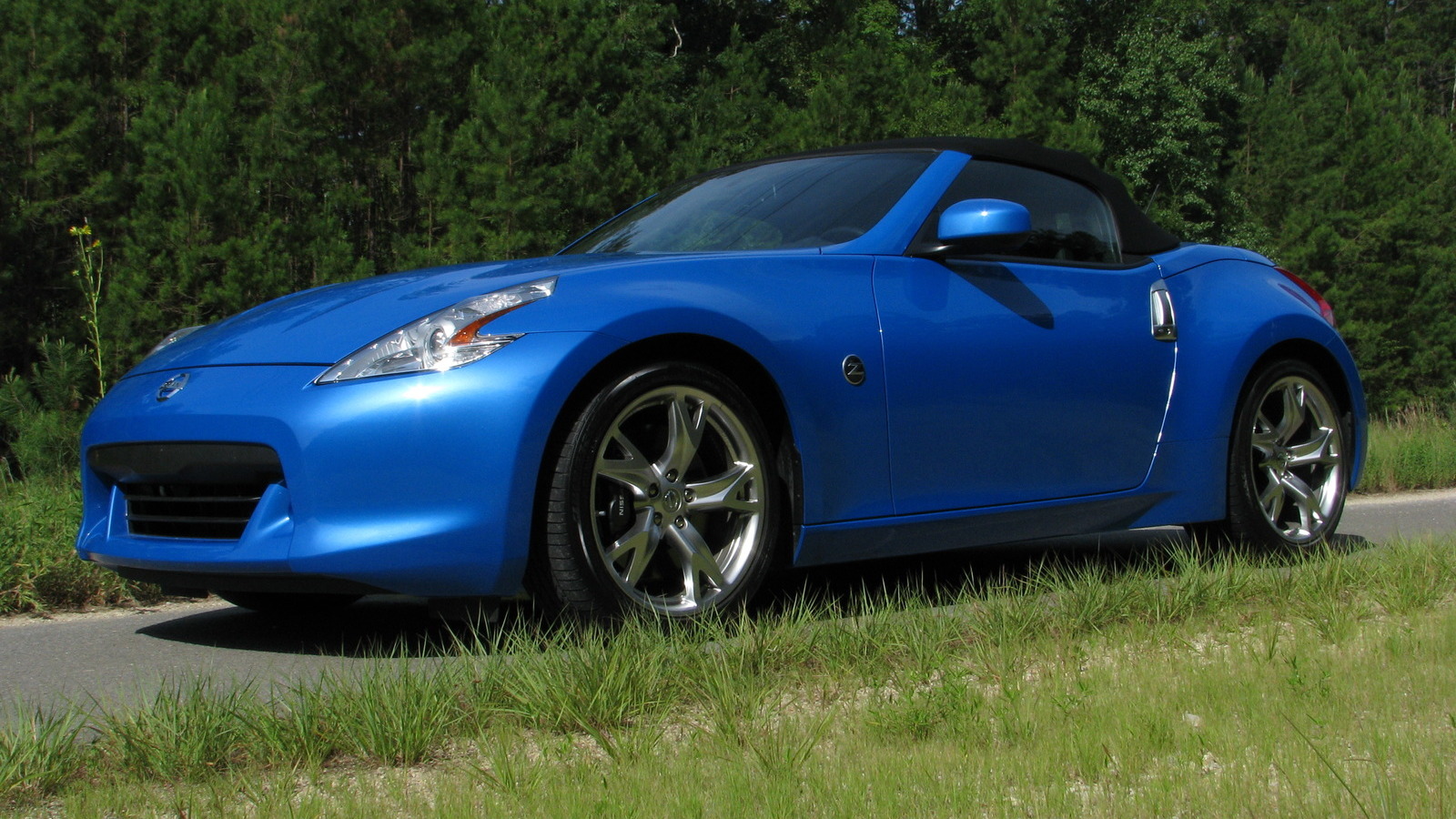 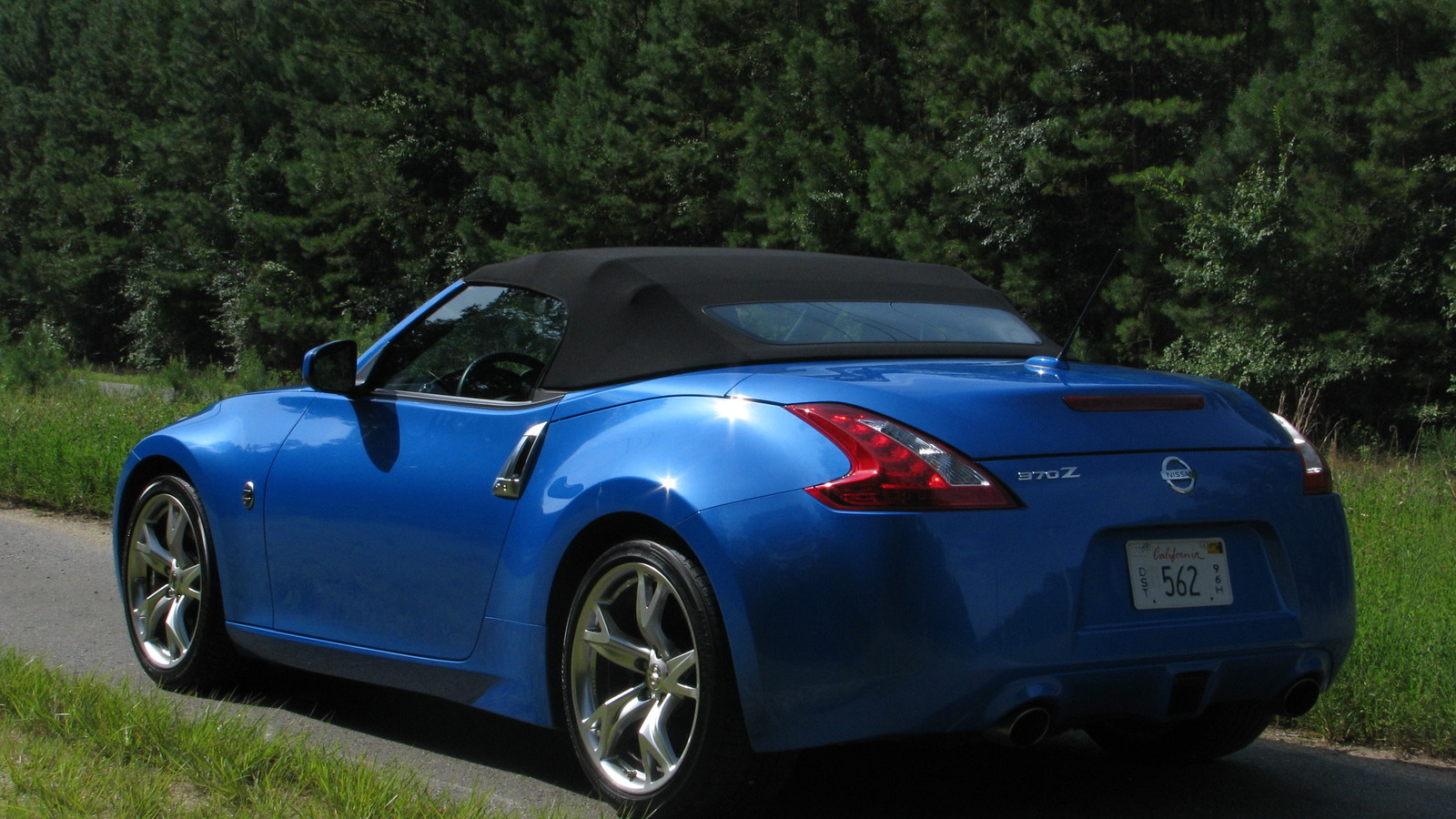 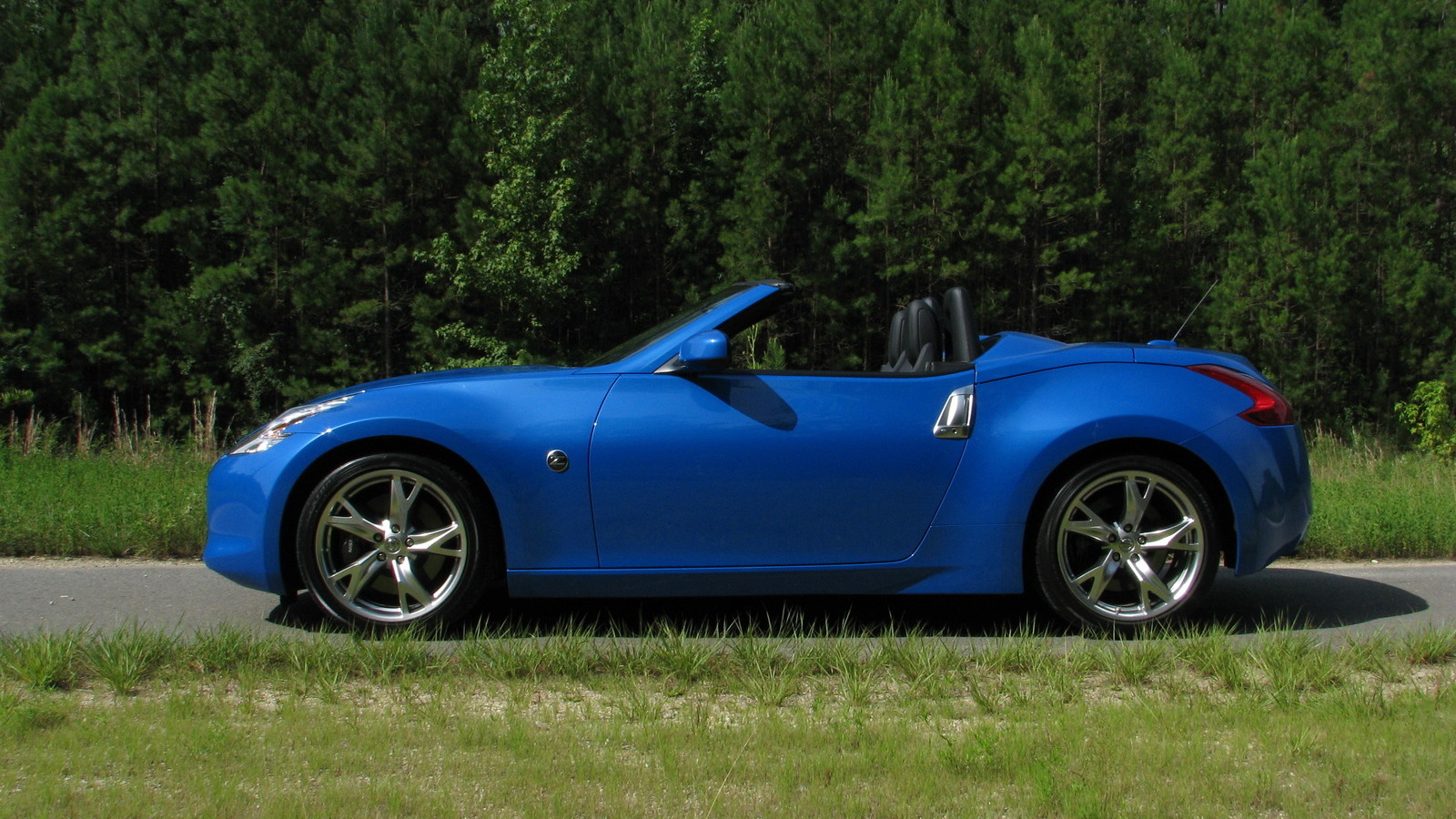 Slide in, drop the top, clutch in and step on the brake, press the start button. The 370Z Roadster's 332-horsepower 3.7-liter V-6 growls to life, and you're ready to attack your favorite stretch of tree-lined two-lane blacktop. It's summer, and this Nissan's ready.

Unlike the 350Z convertible, the 2010 Nissan 370Z Roadster was designed from the outset to be a convertible, and it shows. Top up or down, the proportions and perspectives are much cleaner and more attractive than its predecessor. The top-down look is especially good. Sexy, even.

More Than Just A Pretty Face
But the look isn't the only thing built into this roadster. It's a solid sports car, too. Like its hardtop brethren, the Roadster delivers all the Synchro-Rev downshifting fun and on-demand power you're likely to want within 150 percent of any given speed limit. It'll spin the rear tires at will once you disengage the VDC, it stops like it dropped an anchor, and it'll even turn a corner without complaint.

There are a few Roadster-specific criticisms to performance, of course. Chassis flex for one--there's plenty of it, though it's not as bad as, for instance, the Mustang GT Convertible. Back out of an uneven driveway while looking over your shoulder and you'll see the flex in slow-motion. Toss the Roadster into a long, fast sweeper and you'll feel the suspension settle followed immediately by a second shift, like the car's outside rear wheel is sinking down an inch or so. That's the flex. In the end, it doesn't compromise the car's capability on the street, and you're not going to be turning the Roadster into a dedicated track car anyway, so we'll leave it at that.

Comfortable Cruiser
As a pure street vehicle, the 370Z is brilliant, and the Roadster improves the formula. It's not too loud with the top up, and even with the top down, as long as you keep the side windows rolled up, it's quiet and calm enough in the cockpit to hold a fairly normal conversation up to about 80 mph. But it's the materials and design in the cabin that really make the experience.

If you're at all familiar with the 350Z--I own one--you know that, as good a car as it is, the interior is about one notch above econo-car cheap. It's simple, utilitarian, and functional, to be sure, but the materials don't feel great and the design is uninspired. The 370Z suffers none of this, especially when outfitted with the navigation package and leather interior upgrades. Alcantara door inserts, quality metal accents, durable-feeling plastic buttons, and soft-touch synthetics combine to make a cabin that's almost indistinguishable from an Infiniti's. And that's a very good thing, even taking into account the Z Roadster Touring's $44,420 asking price once you tack on delivery and the Sport Package.

Sure, that puts you on the doorstep of entry-level Corvette Convertible and Porsche Boxster territory, but the Corvette, while it offers a lot more performance, suffers from a second-rate interior in comparison, and the base Boxster, while living up on the luxury end--if a bit noisy--falls short on performance, offering up only 255 horsepower. And both start out at $3,000-4,000 more than the Z.

Simply put, for the price, there's no better sports roadster on the market when you take the whole package into consideration. You can get a better car, but you'll pay more; and you can save money, but you'll give up power and style. It's a great balance.

Some Historical Perspective
Putting the new Z Roadster into perspective, though, we're not entirely sold on the direction its gone. Like the 240Z and 260Z, the 350Z was a simple, and in its early years, relatively light and lithe sports car. The 370Z has moved along the path of the 300ZX, offering even more power and luxury, but numbing the car's feel and handling from sports car territory and putting it closer to grand touring status. Some would argue the 350Z was already more of a GT car, but the 370Z is a long step farther down that path.

By this point you may be wondering what I'm on about. Weight savings was a big marketing point on the 370Z's debut--and compared to the latter years of the 350Z's production run, it is a bit lighter. But compared to the 3,200-pound models in 2003 and 2004, the 370Z is heavier, even against the previous Roadster.

Nissan lists the 2010 Roadster Touring's curb weight at 3,497 pounds with the manual transmission. The 2004 Roadster, by comparison, weighed in at 3,462 pounds in Touring trim. Taken in combination with a one-percent greater forward weight bias (54/46 versus the 2004's 53/47) the whole package is more lumbering, slow to transition, and tends more toward understeer, a trait even the 370Z's upgraded double-wishbone front suspension can't tune out.

Still An Incredible Value
But, as we noted before, the 370Z Roadster is a huge leap forward in daily-driver comforts, overall quality, and Roadster styling, while remaining a solid performer. At this price point, it's impossible to put together the perfect package, but Nissan has come very close. If you can get beyond the badge-dropping value of owning a Boxster or Boxster S, we think you'll find the 2010 Nissan 370Z Roadster, especially one outfitted with the Touring and Sports packages, will find just as welcome a spot in your driveway, and save you a lot of money in the process.