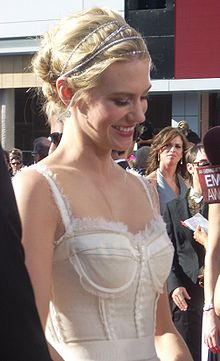 It's a good thing January Jones (allegedly) dodged that (alleged) DUI a couple of weeks ago. Otherwise, she and maybekindasorta current boyfriend Jason Sudeikis would've had to take a cab on their most recent date/non-date to a friend's birthday party. Well, unless Jason has a driver's license. And a car. New Yorkers: you can never be sure.

Anyway, here we see Ms. Jones plucking a birthday present and what looks to be a very small bouvier de flandres out of the backseat of a bright, shiny Land Rover LR2. We suppose this could be the same one in which she (allegedly) rammed three parked cars, but if so, her body shop is a heck of a lot faster than ours. Then again, being on a hit cable series probably affords her some perks, like speedy service and free refills at Cinnabon.

We're guessing this is a new ride, though -- mostly because picking up a new Land Rover in L.A. is about as hard as picking up the morning paper. But we do give Miss Jones props for the color: it's unexpected, it reflects the hot, SoCal sun, and it matches her lovely blue eyes. Best of all, it's recognizable from a distance, meaning that other drivers have plenty of time to get the heck out of the way.