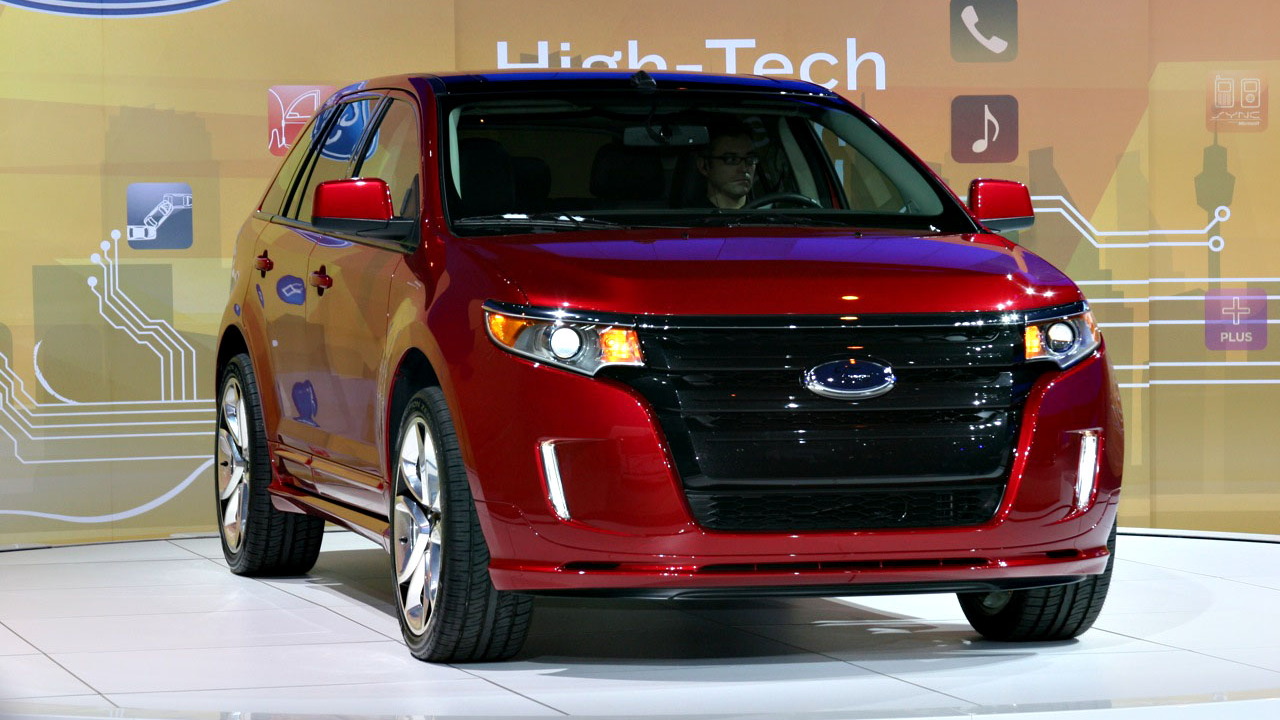 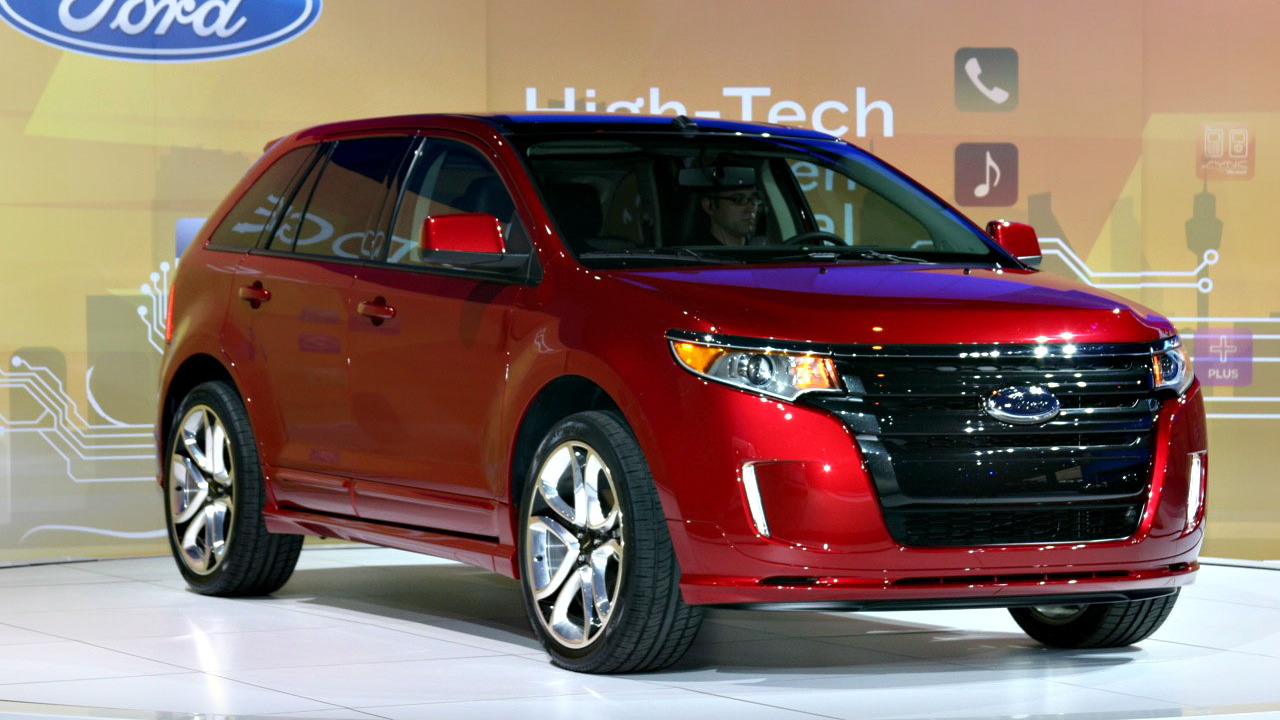 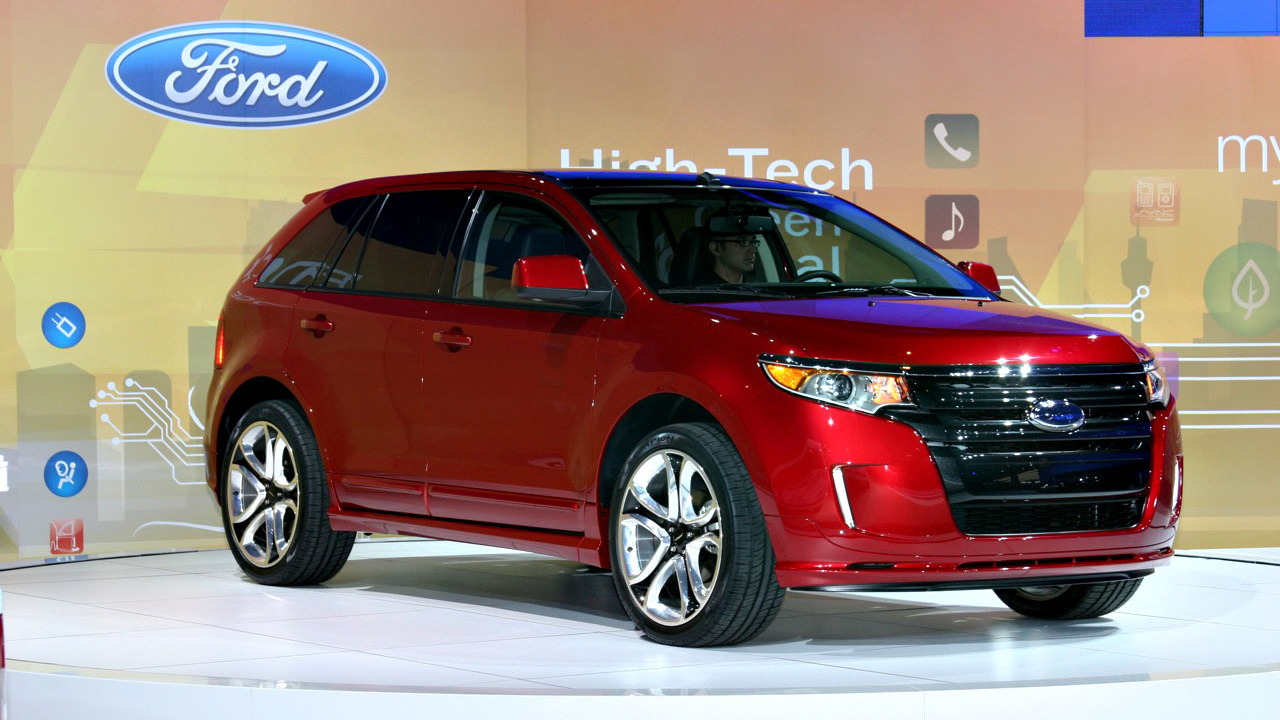 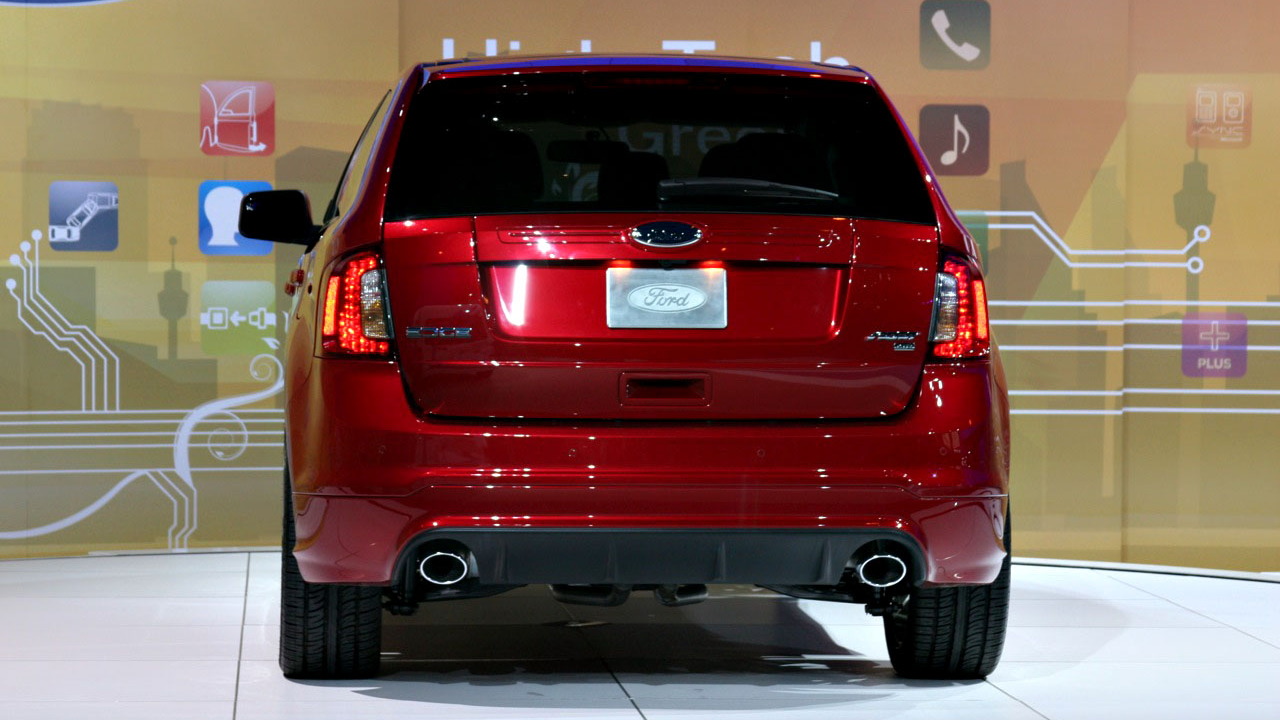 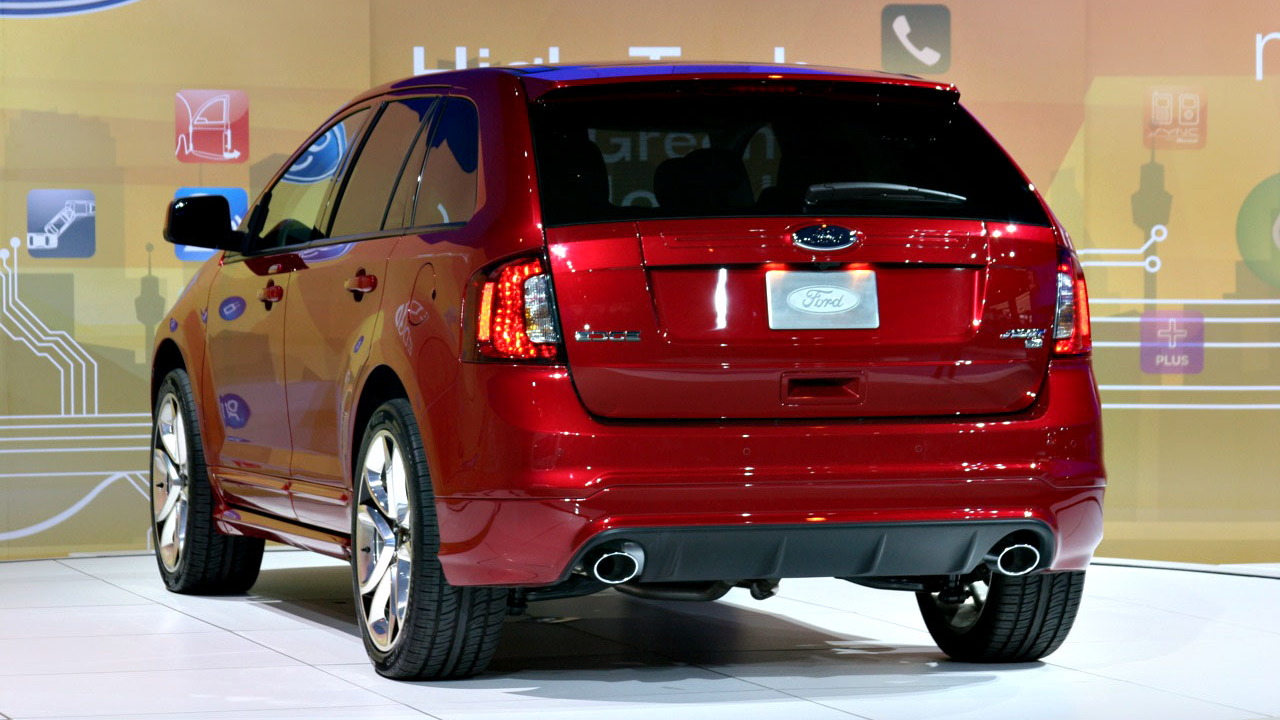 If you want a sporty crossover, your options are currently pretty much limited to Cadillac, Acura, and the Germans. But what if you want some sport without breaking the bank? Ford thinks the new version the Edge Sport may have you covered. For 2011, the newly-revamped Edge gets 305 Mustang-flavored horses in Sport trim, as we reported from the Chicago Auto Show.

The powerplant is the same 3.7-liter V-6 engine rated at 305 horsepower and 280 pound-feet of torque that moves the 2011 Mustang V-6, up from the previous Edge Sport's 265-horsepower mill. Unlike the Mustang, however, the Edge Sport tops out at 25 mpg on the highway rather than 30 mpg. Paired with a paddle-shifting six-speed auto, the Edge Sport promises more go than the average mainstream crossover. We'll have to get behind the wheel to see how well it delivers, but it looks promising.

More show is also on tap to match the go, as "class exclusive" 22-inch wheels are standard on the Edge Sport, giving the sporty crossover a clear visual cue as to its nature as well--a touch also included on previous versions of the Edge Sport. Inside, the show goes multimedia for 2011, with MyFord Touch with SYNC fitted standard, including an 8-inch touch screen with two configurable 4.2-inch screens in the instrument cluster, pushing the vehicle closer to the luxury competition despite its undoubtedly mainstream materials and design.

Notably missing from the equation, however, is a firmed-up suspension or anything directly relating to handling--though we're sure those massive 22s will dampen acceleration and braking compared to more sensibly-sized alloys.

Hit up page two for the full press release, and check out the gallery above--then let us know your take in the comments below.

DEARBORN, Mich., July 14, 2010 – The 2011 Ford Edge Sport is both edgier and sportier than the original version launched in 2009. Customers opting for the popular midsize crossover’s performance version will enjoy a more engaging driving experience, a bolder appearance and industry-first driver connect technology.

“The 2011 Ford Edge Sport is bolder, more powerful and has more customer-focused technology than ever before,” said Elaine Bannon, chief engineer. “Edge customers value style and technology. The 2011 Edge Sport delivers the ultimate in both, now with class-leading performance.”

Bannon has been the chief engineer for Edge, which debuted in December of 2006 as a 2007 model year product, from the start. Edge Sport joined the lineup two years later, and the new version best expresses the vision of combining the signature elements of Edge with even greater engineering know-how.

“With the larger wheels, unique exterior cues and added performance, Edge Sport is the type of vehicle you usually could only find at aftermarket exhibition shows like SEMA. The Sport is certainly a vehicle an aftermarket developer might create starting with a base Edge for the enthusiast/performance customer,” said Bannon.

“The difference for the Edge Sport is that all the performance attributes are precisely engineered and matched by Ford, as are all the exterior and interior design cues and materials, to create the ultimate Edge experience directly from the factory.”

More power and better fuel economy
Class-leading power is delivered by a new 3.7-liter Ti-VCT V6 engine that produces 305 horsepower at 6,500 rpm and 280 lb.-ft. of torque at 4,000 rpm. This improved power – 40 more horsepower over the outgoing Edge Sport – is not at the expense of fuel economy, either. The 2011 Edge Sport fuel economy remains 18 mpg city and 25 mpg highway.

“For 2011, the paddle shift activation for the Edge Sport is ‘live in drive,’ which means the customer doesn’t have to shift to ‘M’ or manual mode,” said Rich Kreder, vehicle engineering manager. “Instead, while in Drive, the driver can pull the ‘+’ paddle on the right side of the steering wheel or ‘-’ paddle on the left side of the steering wheel to go up or down gears. It’s a much more engaging and intuitive experience.”

This execution, available on the 2011 Edge Sport only, allows the driver to shift gears quickly while keeping both hands on the steering wheel. The transmission reverts to automatic mode and upshifts or downshifts as needed when driven at a steady speed.

Class-exclusive 22-inch wheels highlight exterior differentiation
Large wheels have been the signature of Edge Sport since its debut as a 2009 model year product. New for 2011 are class-exclusive 22-inch forged aluminum wheels that are standard. Forged aluminum wheels are often the top choice in the aftermarket because of their premium quality and ability to combine high strength and light weight in one package.

Experienced designers and engineers worked closely with state-of-the-art computer tools to optimize form, fit and function to deliver world-class weight-efficient designs that exceed Ford’s strict requirements – higher than the industry standard – in terms of structural integrity, corrosion performance and other attributes. This ensures the new Ford wheels have higher standards than typically found in the aftermarket.

Complementing the new wheels is a sport-tuned suspension with revised front strut tuning, rear spring rates and rear jounce bumper, which helps stiffen the suspension for a flatter, sportier ride. Key to the suspension tuning is the addition of high-flow shocks. These shocks allow tuning for both handling and ride without compromise to either.

“Drivers will feel a firmer connection to the road when going around a corner and less jarring when hitting a pothole, for example,” said Kreder. “It’s allowed us to make Edge Sport much more comfortable without losing any handling.”

The tires were designed and engineered specifically for Edge Sport and deliver similar grip levels as those found in a Mustang GT tire combined with all-season performance.

Standard on the 2011 Edge Sport, MyFord Touch displays information using two 4.2-inch full-color LCD screens flanking an analog speedometer and an 8-inch touch-screen LCD at the top of the center stack. A five-way switch on each side of the steering wheel controls the information displayed on the corresponding instrument panel screens. The screens can be personalized to display information relevant to each individual driver.

Sony sound system, unique finish panel standard
The MyFord touch with Sony Audio System finish panel is fully integrated. The panel is completely flat (except for the center knob), so the touch cells are executed as circular “landing zones” for the finger.

The touch cells create a miniature, undetectable electric field. A finger breaks the field and causes the cell to go on or off like a traditional switch. This means there is no true button to push – a touch of the finger does the job. Illumination and an audible “beep” confirm activation.

The touch cells can control items such as volume, radio seek, radio station tuning, CD track seek, defrosters and air conditioning. Included in the climate controls is the new MyTemp feature, which allows a customer to program and set the desired interior temperature like a radio preset.

Consistent with other Sony products, the audio portion of the control panel is divided into “Source” and “Sound” sections, allowing customers to select the input (AM/FM radio, HD Radio™ broadcasts, satellite radio, CD, personal devices) and tune the sound with bass, treble, fade and balance inputs on the screen.

The heart of the Sony Audio System is its extraordinary sound quality. Comprised of 12 high-quality speakers and a Class D all-digital amplifier, the Sony system has the ability to pump out 390 watts of continuous power (RMS). Further, Dolby Pro Logic® II technology creates true virtual 5.1 channel surround sound throughout the car for a unique listening experience.

Like the song? You can tag it
Also new on the 2011 Ford Edge Sport is the world’s first use of iTunes® Tagging in an available factory-installed HD Radio receiver. iTunes Tagging provides customers with the ability to “capture” a song they hear on the HD Radio receiver for later purchase from iTunes. With a simple push of a “TAG” button on the MyFord touch-screen display, the song information will be stored in the radio’s memory.

Once a song is tagged and customers dock their iPod to the SYNC system, the tagged song information will transfer to that iPod. Up to 100 tags on SYNC can be stored until the iPod is connected. When the iPod is then synced to iTunes, a playlist of tagged songs will appear. Customers then can preview, and if they desire, purchase and download tagged songs from the iTunes Store.

One significant benefit of HD Radio technology is that the sound quality of the broadcast is dramatically better because of the digital transmission – FM sounds like a CD and AM sounds like today’s FM broadcasts. Unlike analog broadcasts, digital broadcasts aren’t susceptible to interference, fadeout and other issues.

“The goal with the 2011 Edge was to raise the level of all the attributes to world-class status, and with that in mind we needed to improve the Edge Sport that much more,” Bannon said. “With class-leading performance, head-turning styling inside and out and industry-exclusive technologies, we want to provide customers a vehicle that truly delivers the ultimate Edge experience.”