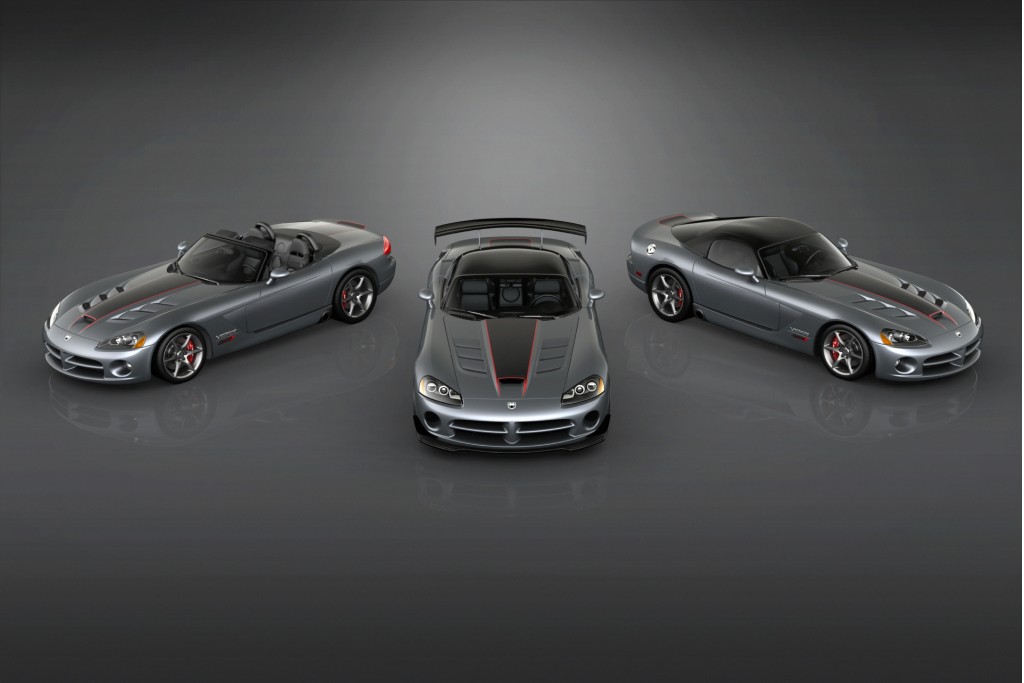 Fiat and Chrysler are well on their way toward a new host of products for the U.S., but one car that won't be making the transition forward is the Dodge Viper. Brilliant at speed and often unbearable around town, the Viper is one of the least compromising, most rewarding and, when abused, most thoroughly frightening cars left on the market. But it's on its way out, and Dodge has unveiled the 2010 Dodge Viper SRT10 Final Edition models to cap the run.

Just 50 of the Final Editions will be built, in a variety of body styles including Coupe and Roadster models with a few ACR variants thrown in for good measure. The mechanical elements of the standard Viper SRT10 or ACR remain in all, but a unique appearance package and numbered serial plates mark the Final Editions out as special.

Exterior modifications include a Graphite Clear Coat paint job, unique side sill badges, and painted black center stripes traced in red. Coupe and ACR models also get a black windshield surround. Six-spoke alloy wheels painted in Anthracite are standard on Coupe and Roadster models, while the ACR gets special five-spoke black Sidewinder wheels. Inside, the black interior gets red accent stitching, red painted gauge cluster surrounds, and bright stainless steel screws in the center stack bezel. The numbered plaque is found near the shifter, just above the floor mats.

The final distribution of the 50 Final Editions will include 20 Coupes, 18 Roadsters and 12 ACR models. Production will start in early summer, but order lists are likely to fill up quickly, so get your hustle on if you want one of the last of these truly ferocious sports cars.