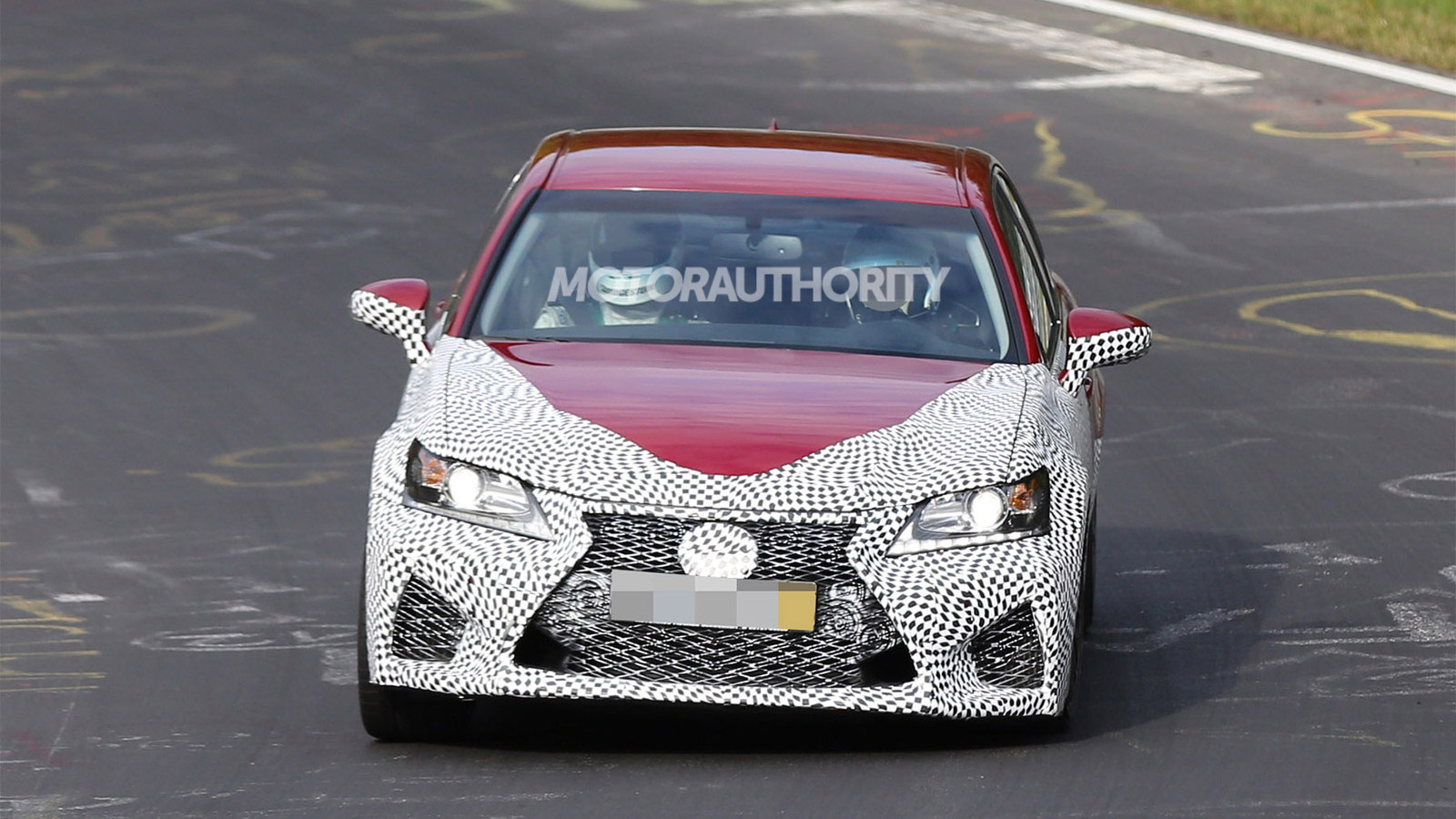 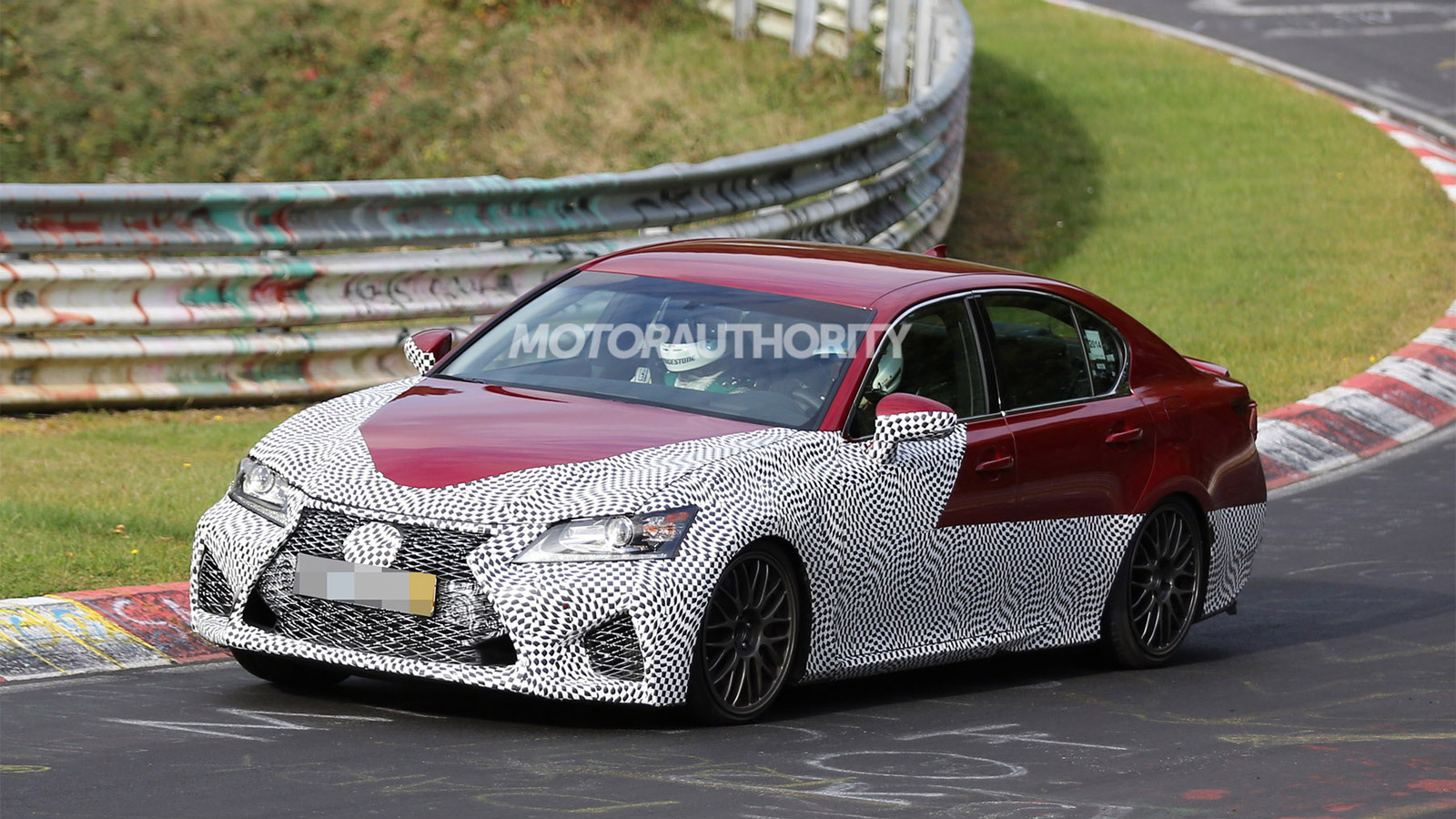 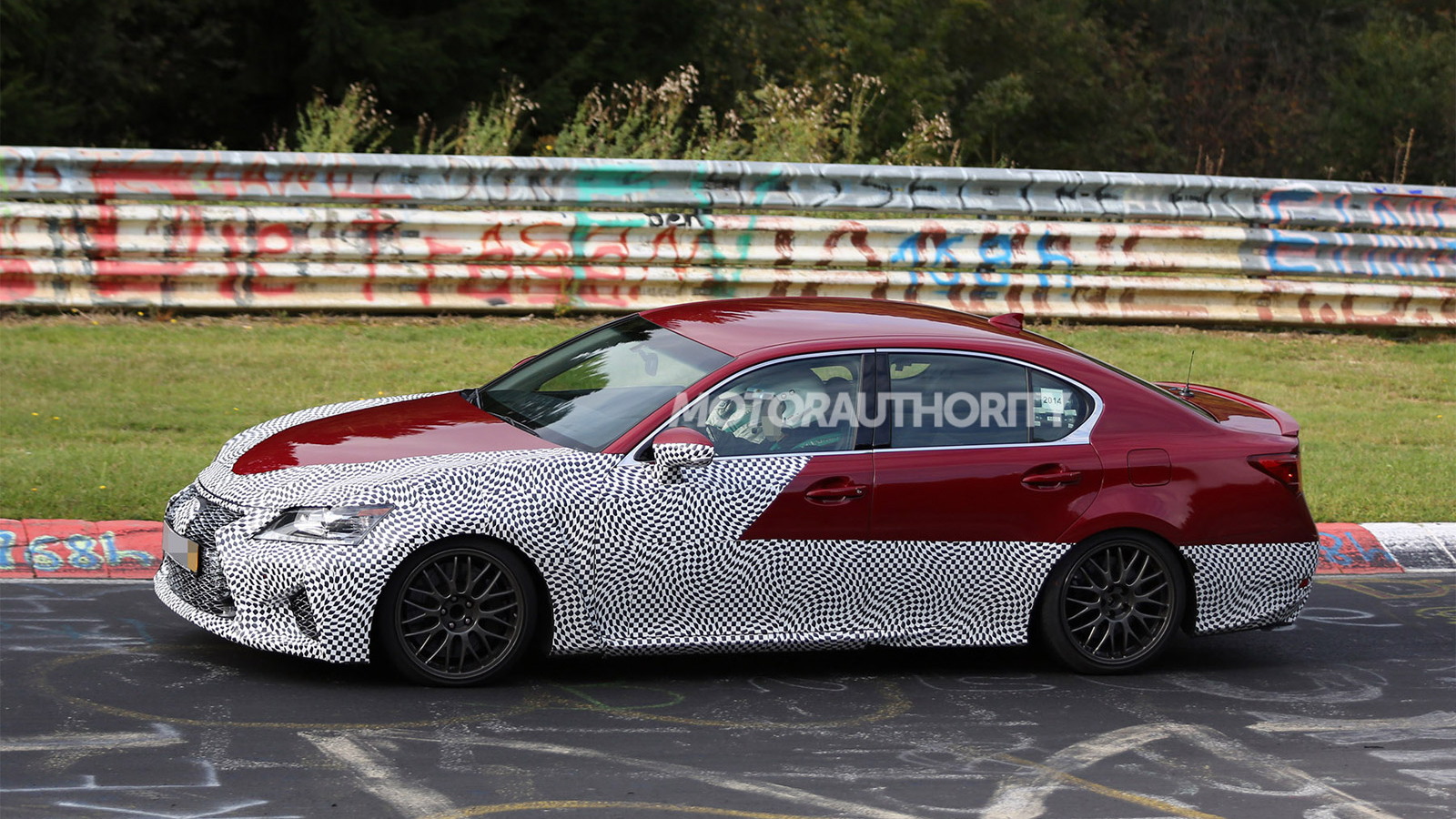 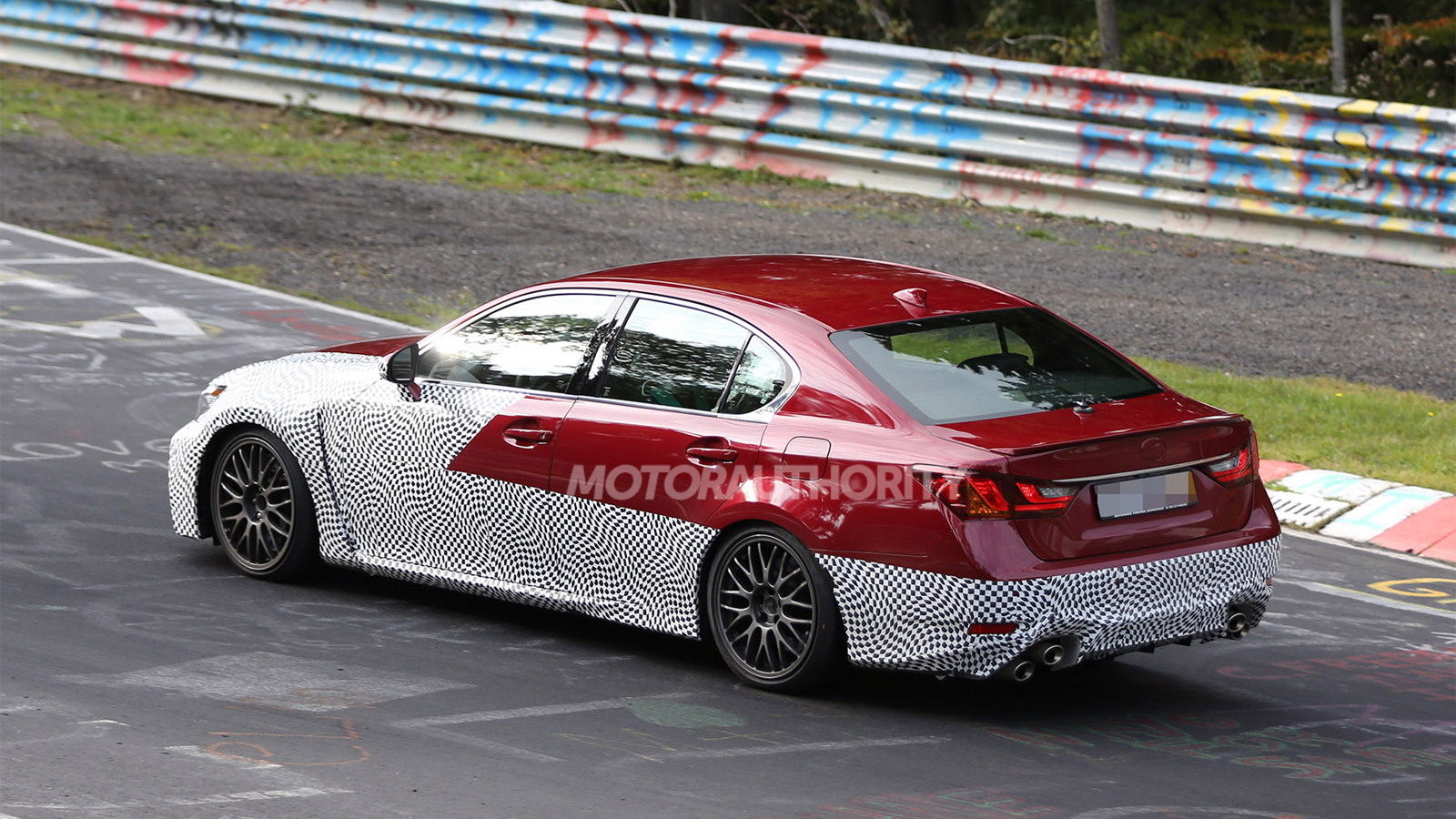 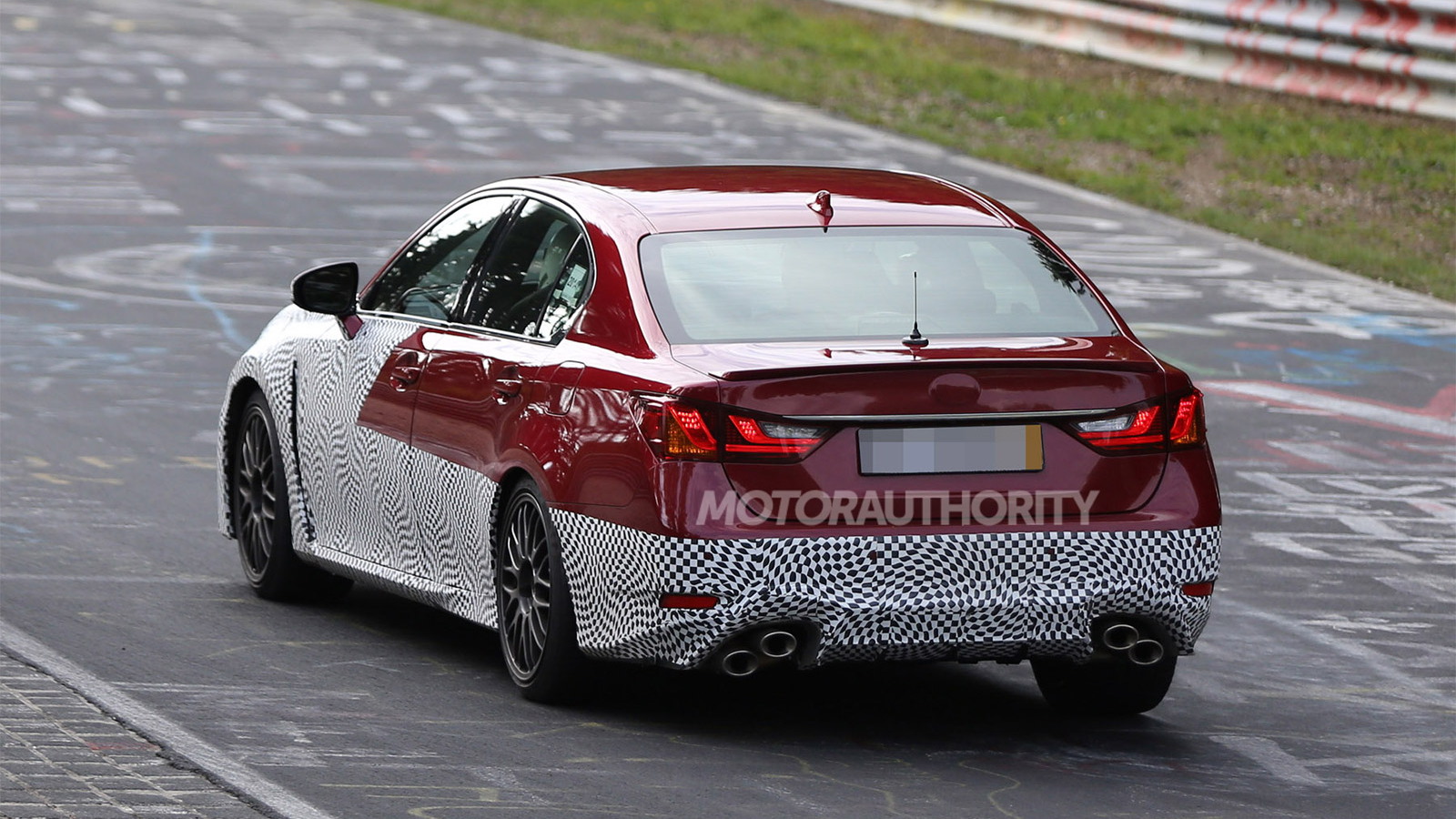 20
photos
The new RC F coupe we recently drove isn’t the only high-performance F model Lexus has in the hopper. Today we have new spy shots of a prototype for the upcoming GS F, which looks to be almost complete and thus could be making its world debut as early as this November’s 2014 Los Angeles Auto Show.

All the tell-tale F signs are there, like the aggressive front bumper with huge air intakes and protruding splitter, front fender vents, chunky side sills, stacked exhaust tips, and integrated rear diffuser. The car also looks to be sitting lower than the regular GS and it wears much bigger wheels and brakes.

Expect the final version to feature some carbon fiber to help shed weight. Lexus has said the LFA’s complex carbon fiber production process would be used for other models, and where better to start than with its F cars. Recall that the RC F has an optional carbon fiber reinforced plastic roof and rear wing.

Power in the new GS F is expected to come from the same 5.0-liter V-8 found in the RC F. In the Lexus coupe the engine’s output registers at 467 horsepower and 389 pound-feet of torque, but we could see more horses dialed up for the bigger and presumably heavier GS F. Our photographer tells us Lexus engineers were benchmarking the car with a BMW M5, which in standard form is rated at 560 hp. Like the BMW the Lexus will feature rear-wheel drive only, and its transmission should be the same paddle-shifted eight-speed auto found in the RC F.

Look out for the GS F to be in showrooms later this year or early next. Pricing should fall around the $70k mark, making the car a slightly cheaper alternative to its intended German rivals. Of course, there’s a new generation of Cadillac's CTS-V just around the corner and it may just set the new benchmark in the segment.