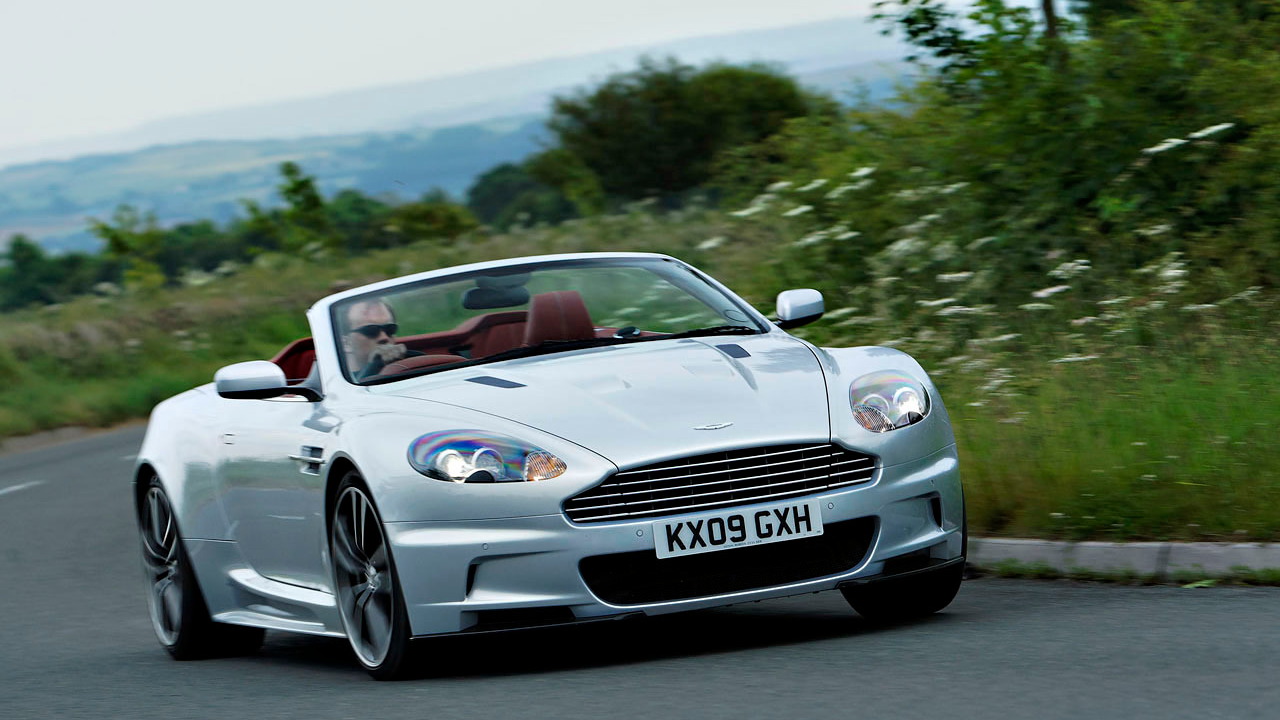 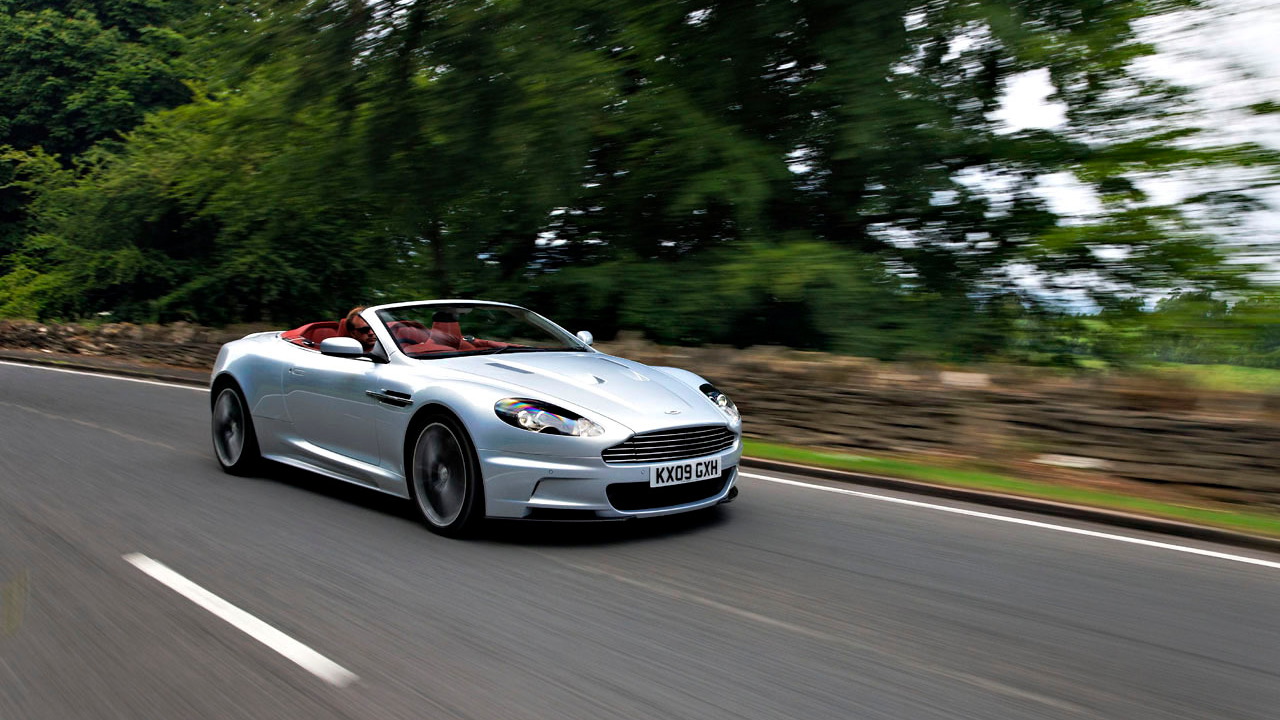 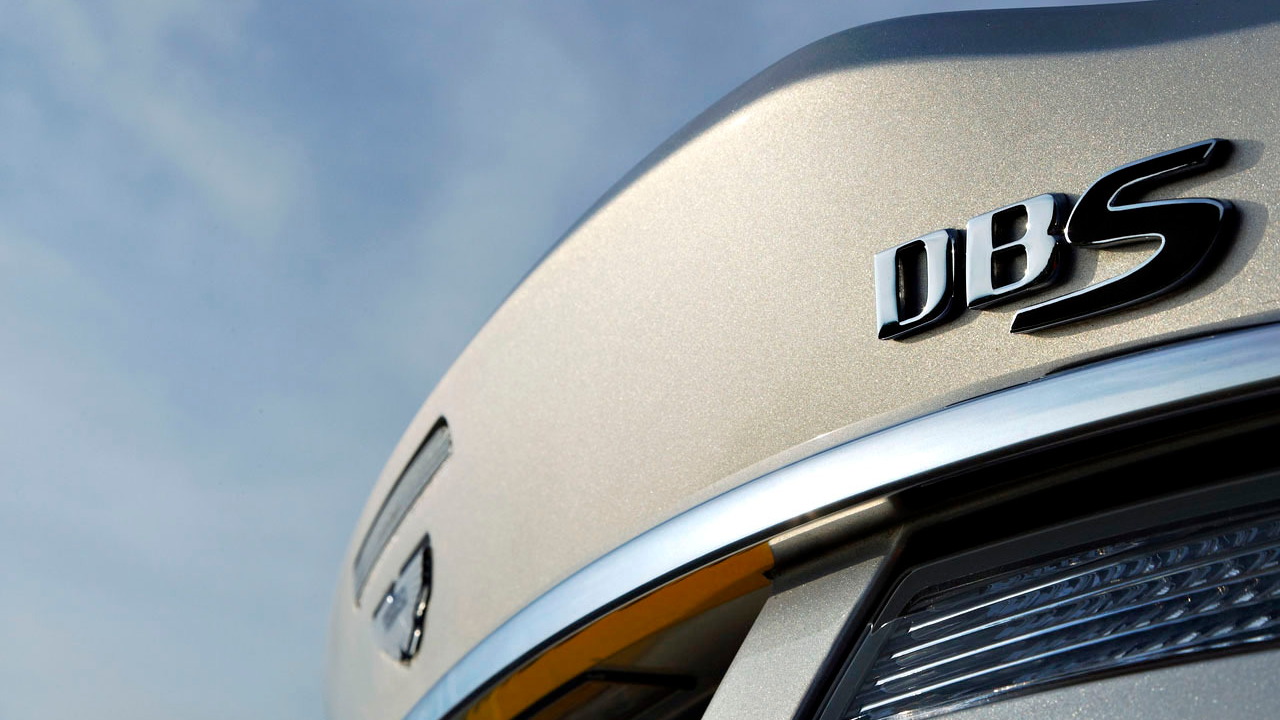 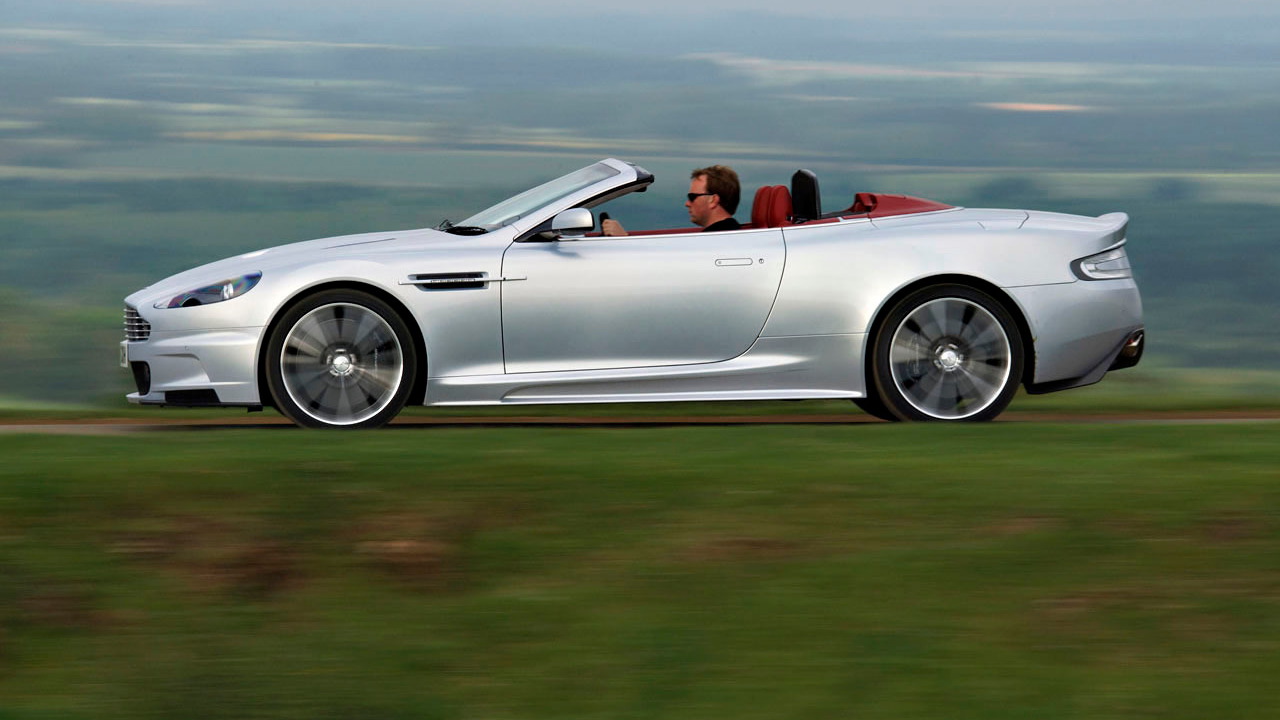 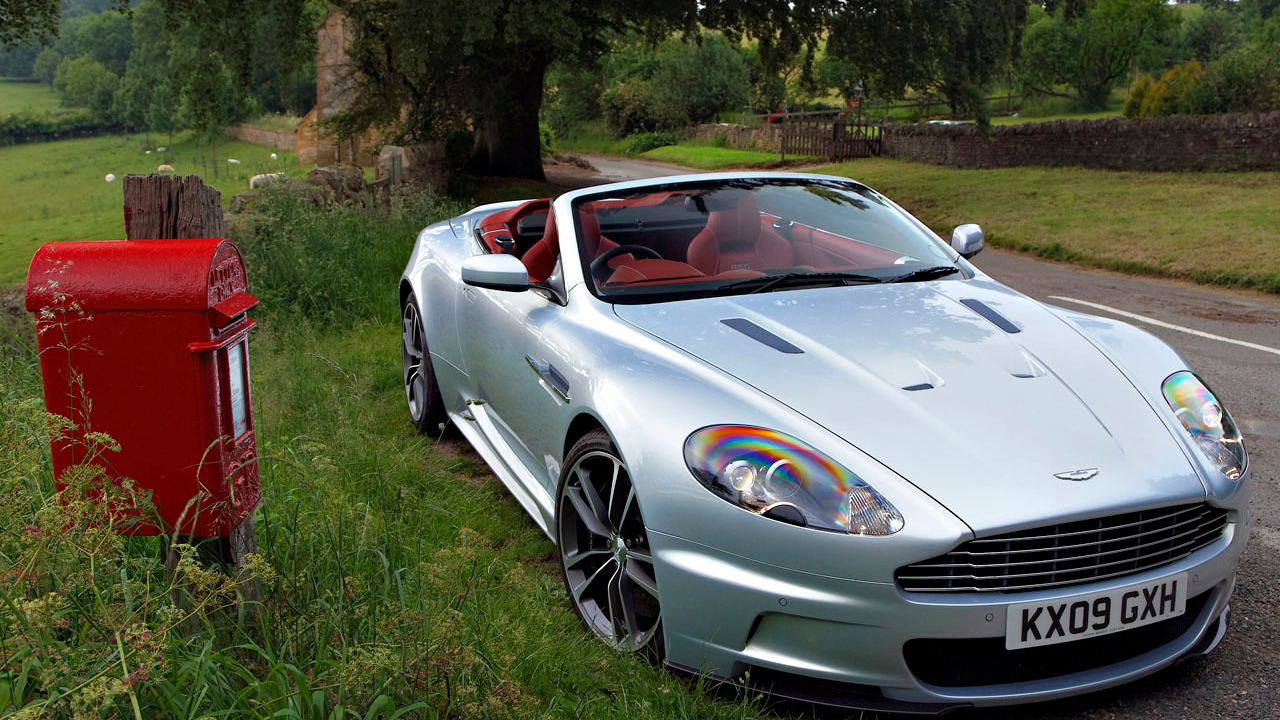 First, you don’t call the Volante a convertible--it’s a Volante, a cloth-top car that’s reasonably quiet when shut, and because it has a soft lid, one with some useful trunk space that an erstwhile hardtop would’ve vaporized. (Also this is a nominal 2+2, and while not even children would find the backseat space viable there’s room enough in this car for overnight luggage which isn’t the case with many a super-sports GT.)

Second, though it’s equipped with a manual-automatic Touchtronic gearbox (an ordinary six-speed manual is also available), unless you’re stuck in traffic it’s far more pleasurably driven as a paddle shift manual than, say, Audi’s S-tronic, as the shifts are actually smoother when manually called for than in automatic mode. This is because they happen more quickly when under the driver’s control and because you’ve shifted, rather than allowed a computer algorithm to decide when to change gears, you can precisely anticipate when that instant will arrive when the tremendous muscle of the car’s 6.0-liter, 510-hp V-12 will pause, the bootheel of g-forces on your chest will lift for half a heartbeat, and then you’re mashed back into the driver’s seat, resuming the boost-phase mode of the DBS’s haul toward a nearly 200-mph top speed.

Third, should you happen to want to drive the DBS like a sane person, that is to say, calmly and coolly and within the constraints of suburban and even rural constabulary mores—you can do so, even as the V-12 under the hood and the metallic paddles that control the gearbox pretty much beg you to quit forcing the DBS to crawl around town on errands and instead mash the gas and let the car realize its full potential.

Fourth, I've driven the V8 Vantage, which is also extraordinary, and also exceptionally fast. But the DBS is yet more car--the growl is laced with a menace, an even stronger purity of purpose. Its potential simply cannot be realized on any highway, state or Federal, in the United States.

Know that the DBS's chassis isn’t far removed from Aston’s Le Mans racing machines; there’s a pressed, extruded and cast aluminum subframe bonded to carbon fiber, aluminum and composite body panels. There’s an actively damped suspension with available Track Mode to further stiffen the “knees” of the DBS so that any corner on any road or freeway offramp is taken pancake flat—massive 20-inch wheels and Pirelli P Zero (245/35 front; 295/30 rear) tires ensure that even the slightest drift is perfectly within child-simple control of the driver.

The DBS’s front/mid mounted engine and transmission only further aid a sense that in any corner at any speed you can dial out understeer precisely and even though I spent a fair amount of time with the DBS hunting down and then ass-hauling through every-reduced-radiused highway cloverleaf in northern New Jersey it was unusual to even hear tire chirp.

True, purely reckless driving attempts can mildly perturb the DBS’s quietude, but only because your 90-mph hooliganism won’t fit on that particularly dinky shard of back-lane pavement.

So $300k cannot suspend the laws of physics and the confines of sane behavior. This should come as no surprise. There’s a further downside, however; cars like this are cop bait. A 911 or Corvette may elicit eyebrow raises from the fuzz, but rolling along in the DBS was like having a giant neon sign on the hood exclaiming, “Arrest-me-I’m-speeding!”

Driving the DBS in the right-hand lane of a four lane state highway at 10 mph over the speed limit, while being PASSED by a Chevy Astro conversion van that was pulling ahead of the Aston at a very fast clip…. I was tagged for speeding. The officer wasn’t happy when I suggested that his radar might’ve actually picked up the wall of metal passing me on my left--he wouldn’t have even been able to see the Aston from his perch on the median until after the Astro had completed its pass, which happened right in front of the officer’s bumper. He suggested I was accusing him of “profiling.” I countered that in fact he had two cars to pull over and he picked what he thought was the “faster” of the two, rather than the one in the left lane, doing the actual passing.

He just smiled. Told me that he loved his job. Then handed over some very expensive paperwork.

The super convertible mates high-end performance with style and comfort

Not that the privilege of driving the DBS isn’t worth the price of admission. Should you have $286,500 for a car you no doubt are already aware that paying a $250 toll now and again to pad town coffers is simply an additional maintenance expense. And of course if you are in that elite realm of buyers even a $500 fine is pocket lint.

So drive your DBS at night, on poorly lit streets, preferably, and thrill to everything this automobile offers--which is a hell of a lot. The DBS is a screaming riot of fun. It can make so many other cars, even extraordinarily great ones that are good values such as that aforementioned 911, seem about as compelling as Honda Accords.

Just starting the V-12 and hearing its exotic symphony would make any buyer happy. Even with the engine off there are joys here, among which include the softly rose-lit gauges, the 10-way adjustable sport seats that aren’t sports car punishing despite the aspirations of the vehicle, and the artistry of the heavy metal ashtray lid and its fogged glass chamber that belong to the Mad Men fetishist era of smoking.

I also cannot imagine ever tiring of the motion of the door handles, which lay flush against the car. Push in at the front of the handle and its tail swings outward for you to grab--design and function elegantly wed as one. However, the fact that the DBS doesn’t come with a system that senses the presence of a key in your pocket and auto-unlocks the doors (available these days on cars down to $40,000) is a head scratcher.

One exquisite joy afforded the DBS buyer that I’ve honestly never experienced in another car is the astounding aural wonder that is the Bang & Olufsen BeoSound DBS sound system. Honestly, it made my eyes well in rapture. The downside of which is that MP3 tracks not downloaded at their highest quality mode will sound flawed. A friend who mixes records for a living sat in the car and we swapped CDs for MP3s and he then pointed out how he’d recommend any Aston owner either toss his iPod in the trash and revert back to CDs, or only load music directly from CDs to a portable audio device.

Then we just sat there. Not talking. For another ten minutes. And listened.