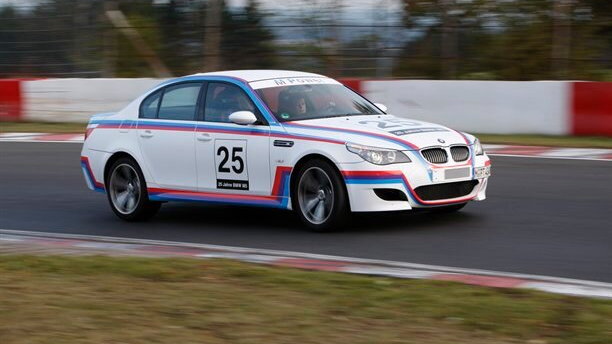 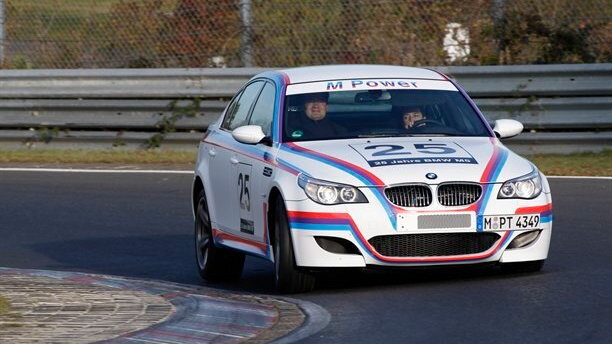 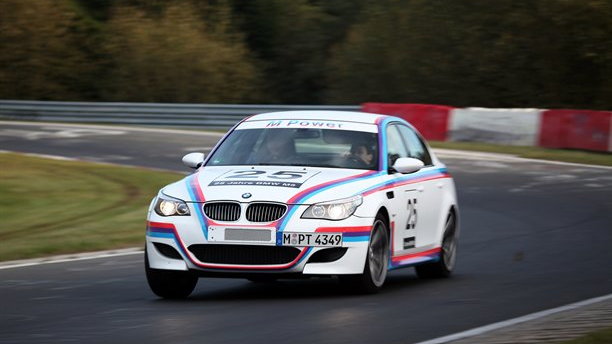 It's hard to believe the BMW M5 has been around for a full quarter of a century now, but since the E28's inaugural production run in 1985, the M5 has been barreling down backroads and impressing people the world over. Today BMW has released a new, lightweight version of the E60 M5, a sort of CSL, which took to the track in Germany in celebration of the 25-year benchmark.

The car gets a modified version of the M5's 507 horsepower V-10 engine, brought up to 5.5-liters in the CSL application thanks to a longer stroke that ostensibly enables the car to churn out even more torque. If accurate, that would make the 5.5-liter V-10 the largest ever in an M Division car.

The power output of the enlarged powerplant sits at 580 horsepower and about 400 pound-feet, indicating the engine is still a peaky, high-revving beast. The standard 5.0-liter version screams to an 8,400 rpm redline, though peak power comes on at 7,750 rpm.

But bigger engines and more power aren't really what a CSL version of an M car is all about. So BMW engineers have shaved about 110 pounds from the big Bimmer's weight, bringing it down to a still-hefty 3,916 pounds. That's a few hundred pounds lighter than the comparable Cadillac CTS-V, however.

To get rid of the weight, some of the creature comforts had to go: carbon fiber-backed front seats and no rear seat at all. Suspension damping is also firmer but due to its variable nature, still also likely comfortable on the road.

Between the lightening and extra power, the prototype M5 CSL is expected to nip under the 4.0-second 0-60 mph mark and generally provide a more responsive, edgier feel than the standard car.

But before you get your checkbook out, we're sad to say that this special-edition M5 will never see production. It's just a one-off anniversary special that will always remind us of what could have been.

For more BMW M5 info and to see what actually is being cooked up for the car's next generation--including potentially dropping the V-10 in favor of a turbo V-8--read up on our spy shot coverage.