Mazda’s Nagare concept is just the latest in a string of recent concept cars from the Japanese brand, which includes its Sassou from Frankfurt in 2005, the Senku at Tokyo also in 2005 and the Kabura in Detroit this year. Their latest effort is the first of a new series of design concepts that Mazda will showcase at several major auto shows this year.

Developed by Mazda’s US based design team, the Nagare, which means “flow” in Japanese, suggests where Mazda design will go in 2020. According to a Mazda spokesman, “the company doesn’t produce concept cars to spin its wheels, and while some are more forward-looking than others, we simply do not create pure flights of fantasy. We develop these ideas to demonstrate what we really intend to build and sell.”

Its creators describe the Nagare as “a concept of a concept.” It showcases both proportions and surface language that will evolve in subsequent designs planned for presentation at future auto shows. Mazda’s next concept, which is planned for Detroit, will be much more practical and could be produced in the next decade, while another concept planned for Geneva is something the carmakers expects to implement in the very near future.

Click here for more images and the full press release. 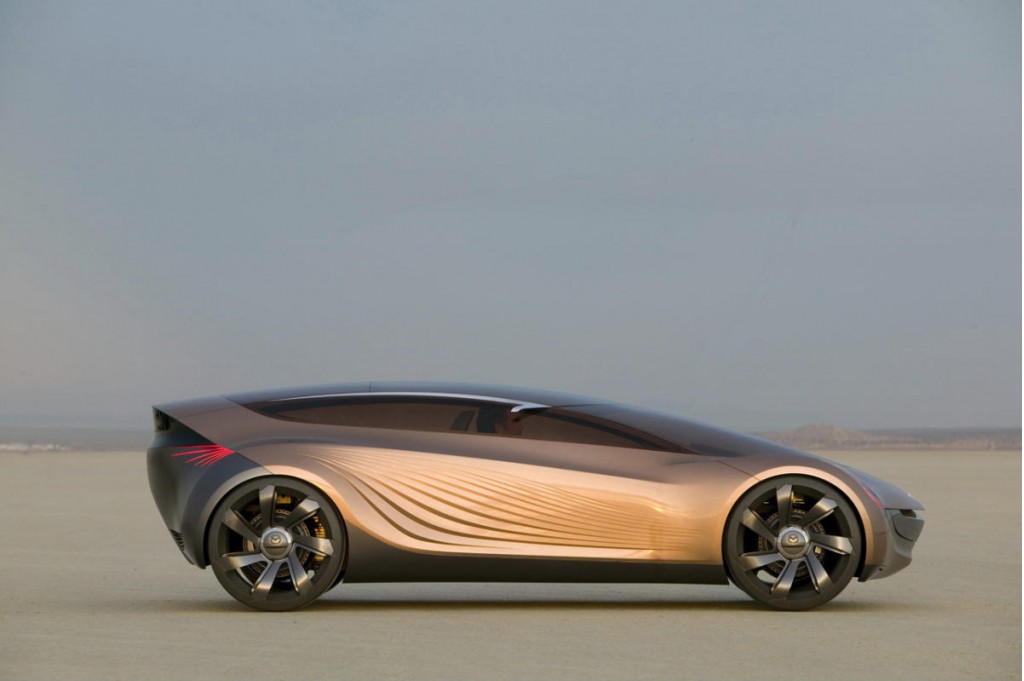 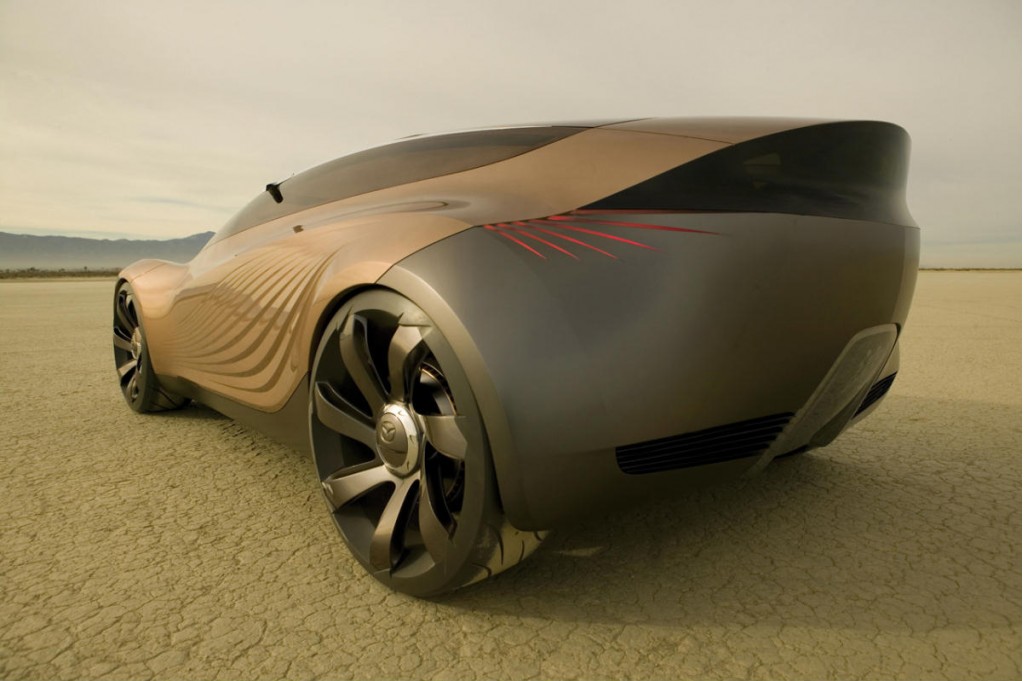 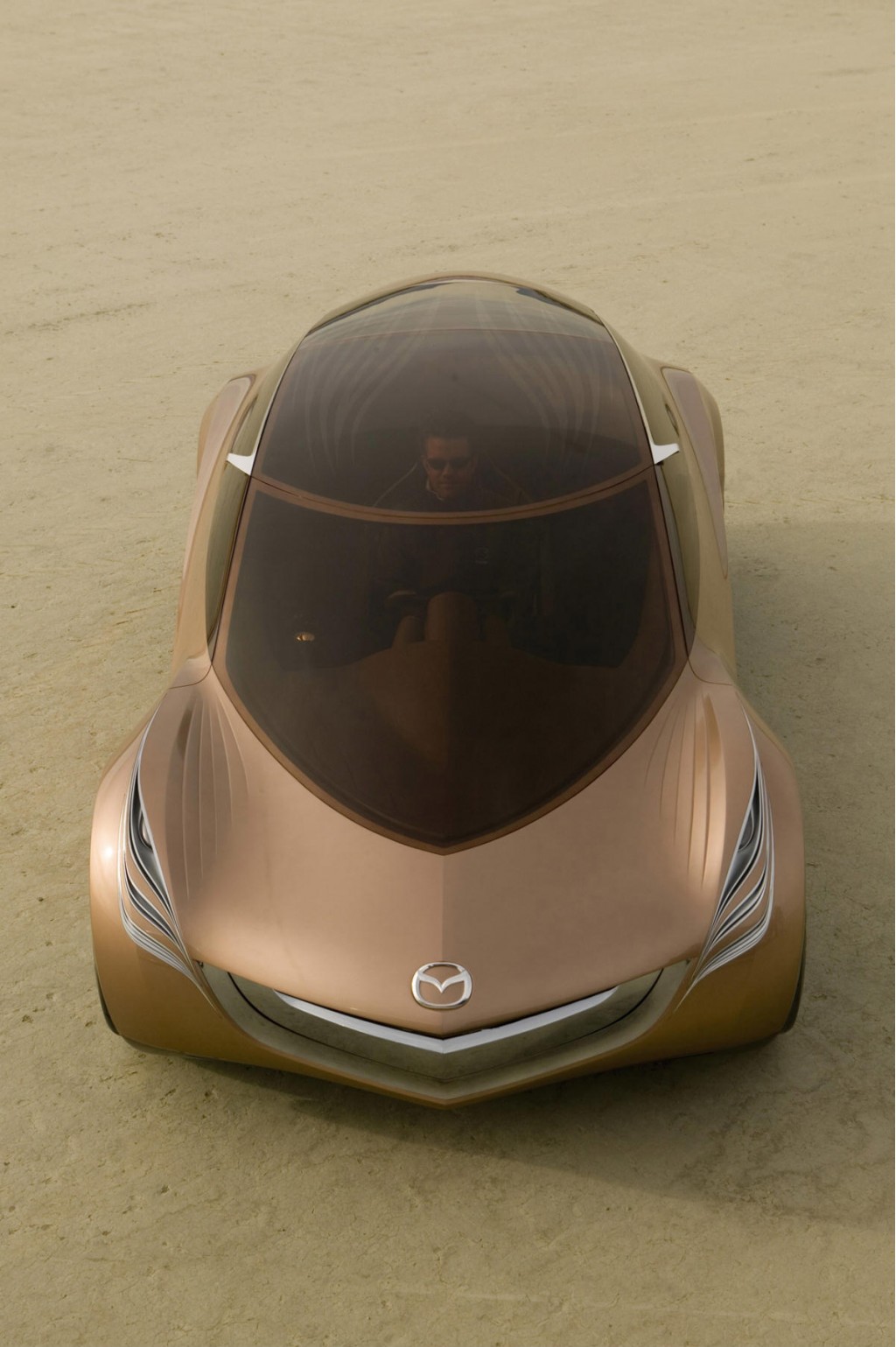 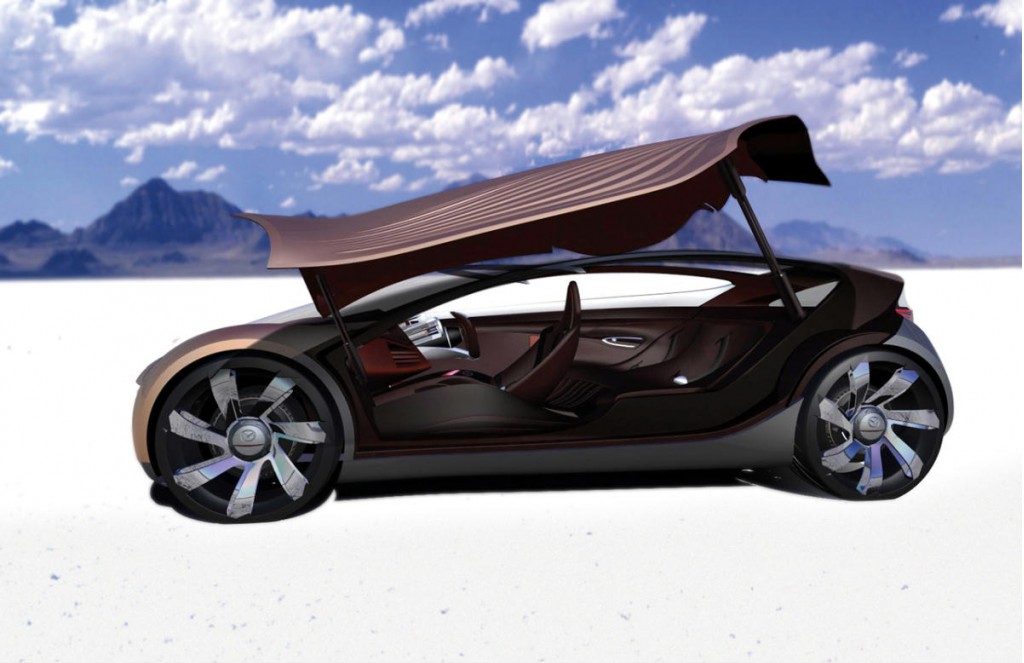 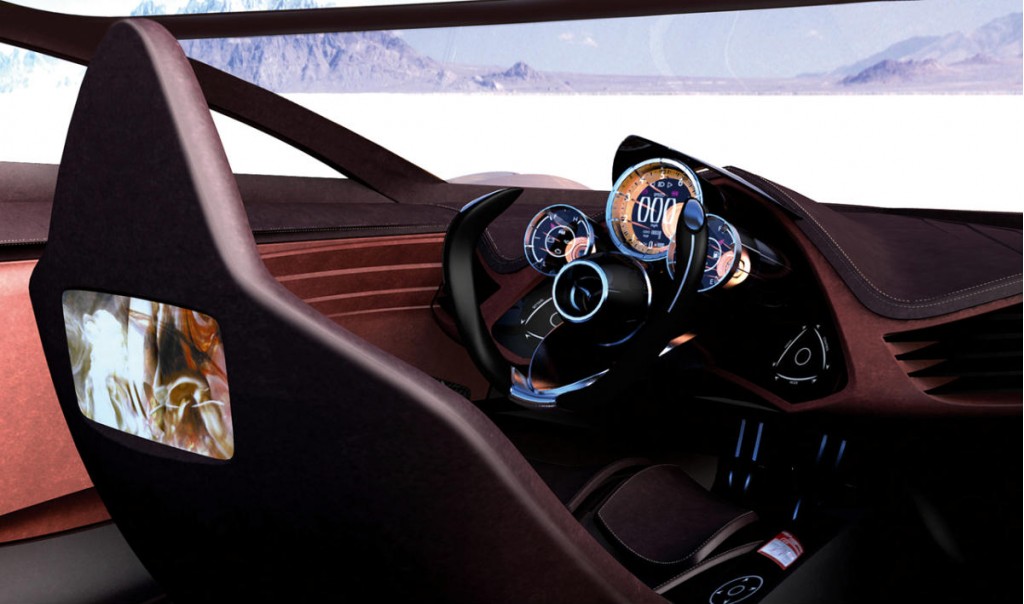 After presenting three ground-breaking concept vehicles during the 2005-2006 global auto show season – Sassou at the 2005 Frankfurt Motor Show, Senku at the 2005 Tokyo Motor Show and Kabura at the 2006 Detroit Auto Show – Mazda’s global design team wasn’t about to rest on its laurels. To keep energy levels brimming, and to begin the process of evolving Mazda’s design and surface language for future Zoom-Zoom vehicles, Mazda’s design division has invented a new surface language called Nagare for introduction at this year’s Greater Los Angeles International Auto Show.

NAGARE: (pronounced “na-ga-reh”) Japanese for ‘flow’ and the embodiment of motion.

Under the direction of Mazda’s new global design director, Laurens van den Acker, the challenge given to the team was to invent a novel means of registering motion in vehicles whether they’re moving or still. Nagare achieves that goal while also signaling a fresh design direction for future Mazda vehicles.

Nagare is the first of a series of design concepts – some closer to actual production vehicles than others – that Mazda will showcase this global autoshow season, including Los Angeles, Detroit, Geneva and Tokyo.

Franz von Holzhausen, Mazda North American Operations’ (MNAO) Director of Design, and the man responsible for leading the US-based design team which developed this vehicle, explains, “We’re looking well down the road with Nagare. We want to suggest where Mazda design will be in 2020. To do that, we redefined basic proportions and the idea of driving without losing the emotional involvement. Mazda’s driving spirit will be enhanced and intensified by Nagare.

“Mazda doesn’t produce concept cars to spin its wheels, and while some are more forward-looking than others, we simply do not create pure flights of fantasy. We develop these ideas to demonstrate what we really intend to build and sell. It took soul-searching along with basic research to invent the new surface language we’re calling Nagare. The dynamic qualities of Mazda products already do an excellent job of capturing the spirit of motion so our goal was to move our design language a major step beyond what we’ve already demonstrated with Sassou, Senku, and Kabura.

von Holzhausen continues, “We began by studying motion and the effect it has on natural surroundings: how wind shapes sand in the desert, how water moves across the ocean floor, and the look of lava flowing down a mountainside. Natural motion registers an impression in your brain and that’s what we hoped to capture with the new Nagare surface language.

“Once we started sketching our ideas, we weren’t surprised to find similar quests underway in other product design disciplines. We found examples of motion influencing the shape and surface of furniture, architecture, apparel, and artwork. Nagare undoubtedly proves our confidence in identifying a new and exciting visual language for Mazda as we lead the way in defining the interaction of motion and flow in automobile surfacing. “We began by developing a surface or textural language that describes flow. The motion of the vehicle is defined by, and evident in, the texture of its interior and exterior surfaces. There is no right or wrong way to capture the impression of motion, so each of the concepts we present throughout this global show season will embody a different interpretation of our new surface language.”

CONCEPT OF A CONCEPT

von Holzhausen describes Nagare as “a concept of a concept.” It’s intentionally a celebration of proportions and surface language that will evolve in subsequent designs planned for presentation at future autoshows this season. In other words, design first, engineering later at this point in the process, in contrast to the classic ‘form-follows-function’ approach.

Adds van den Acker, “It’s important to start with the vision first: Nagare is sculpture on wheels, our vision of what Mazda automobiles could look like in 2020. The concept we’ll present in Detroit is practical enough to produce in the next decade, while the model under development for Geneva will embody design ideas we expect to implement in the very near future.”

Like all Mazda products, Nagare has the soul of a sports car. Its shape is sleek and aerodynamically efficient, as you’d expect of an urban cruiser for the future. Wheels are positioned at the far corners of the envelope for quick steering response and agile maneuverability. There isn’t an ounce of overhang wasted.

Access to the four-place interior is provided by two double-length doors that hinge forward and up like the wings of a butterfly. The driver is centrally located, like a single-seat sports racer, for optimum control and visibility. Since the driver is positioned under the highest portion of the roof, there’s ample headroom with a comfortably reclined backrest. Innovative seating arrangements are a Mazda specialty, as witnessed by the successful RX-8 four-passenger sports car and the clever packaging in the upcoming CX-9 three-row, seven-passenger crossover sport-utility vehicle.

Recognizing that an advanced design concept needs an advanced powertrain, Nagare could conceivably be powered by a hydrogen-fueled rotary engine. Mazda’s work on this advanced driveline technology is among the most advanced in the world, with hydrogen/gasoline-fueled rotaries powering RX-8s currently in service in Japan.

Nagare’s side surfaces provide a means of visualizing the air flowing along and over the car as it speeds through the atmosphere. Light and shadow combine to convey this feeling of motion even when the car is still. Similar hints of fluid flow are evident in the hood, wheel arches, LED head- and tail-lamp treatments. The same surface language plays throughout Nagare’s interior; the instrument panel, center console, and door panels all appear to be influenced by flow.

Notes von Holzhausen of the vehicle, “Beauty is not a clean sheet of paper. Nagare’s motion-influenced surface texture compliments its dynamic attributes. Because of Mazda’s sporty essence, we never wrap our customers in boxes.

“Our new surface language is car-centric. After studying the architectural approach, which tends to be strictly rigid, and the organic approach, which is highly fluid, we created Nagare to straddle those two disciplines. It is fluid, graceful, and dynamic. But the message it registers on the beholder is flow-motion.”