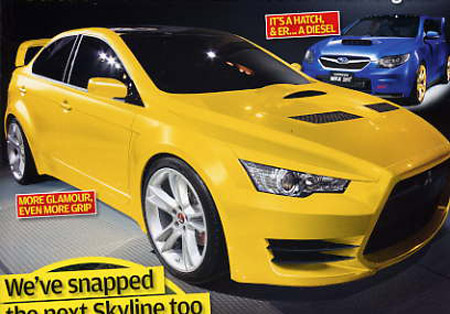 It looks like Mitsubishi is going to be milking all the (justifiable) interest in the new Lancer Evolution for all its worth. It’s just released sketch images of what the actual Evo X will look like. The previous concept that’s been shown was just a taste of some of the styling cues, but the one that will be shown at Detroit, along with the new Lancer, will be very very close to the original. We've already reported that UK magazine Autocar scooped the production lancer on its cover, which you can see by clicking the image to the right.

The final production car won’t go on sale until the second half of next year and will be based on the GS platform shared by the Doge Caliber. The next generation Evo is likely to feature a twin-clutch DSG style transmission and an all new AWD system as well as Super All Wheel control (S-AWC). This latter feature uses torque vectoring, which can direct different levels of torque to individual wheels. The upgraded system manages braking, throttle, and suspension adjustment all in real-time.