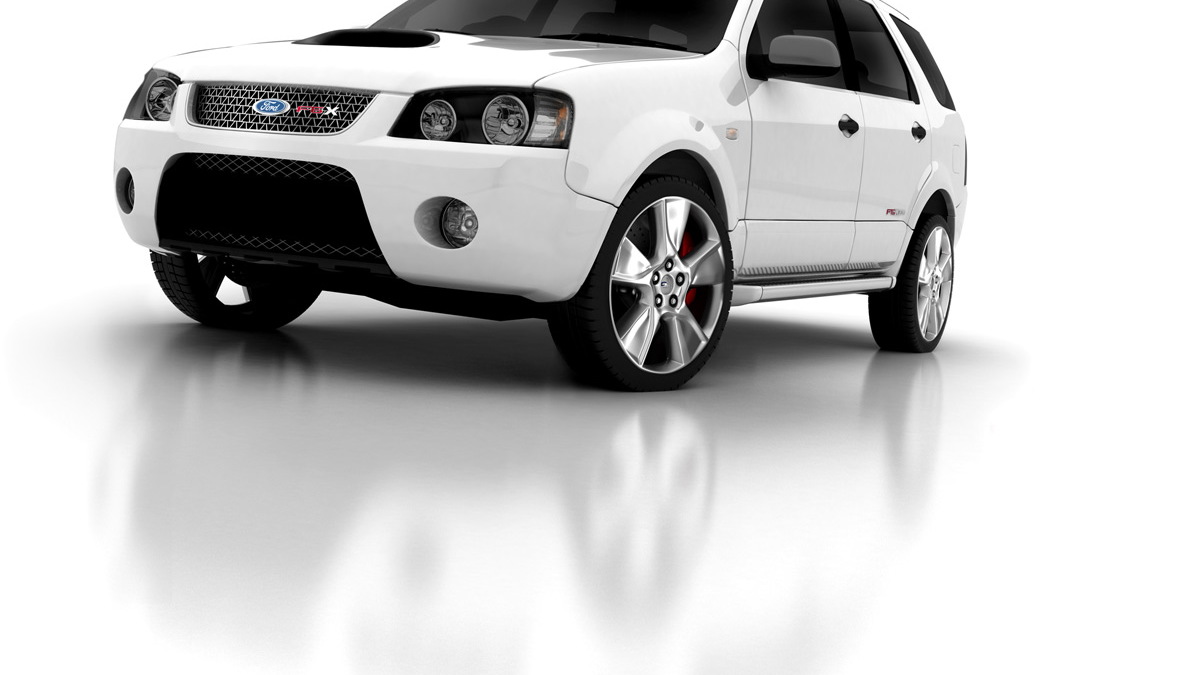 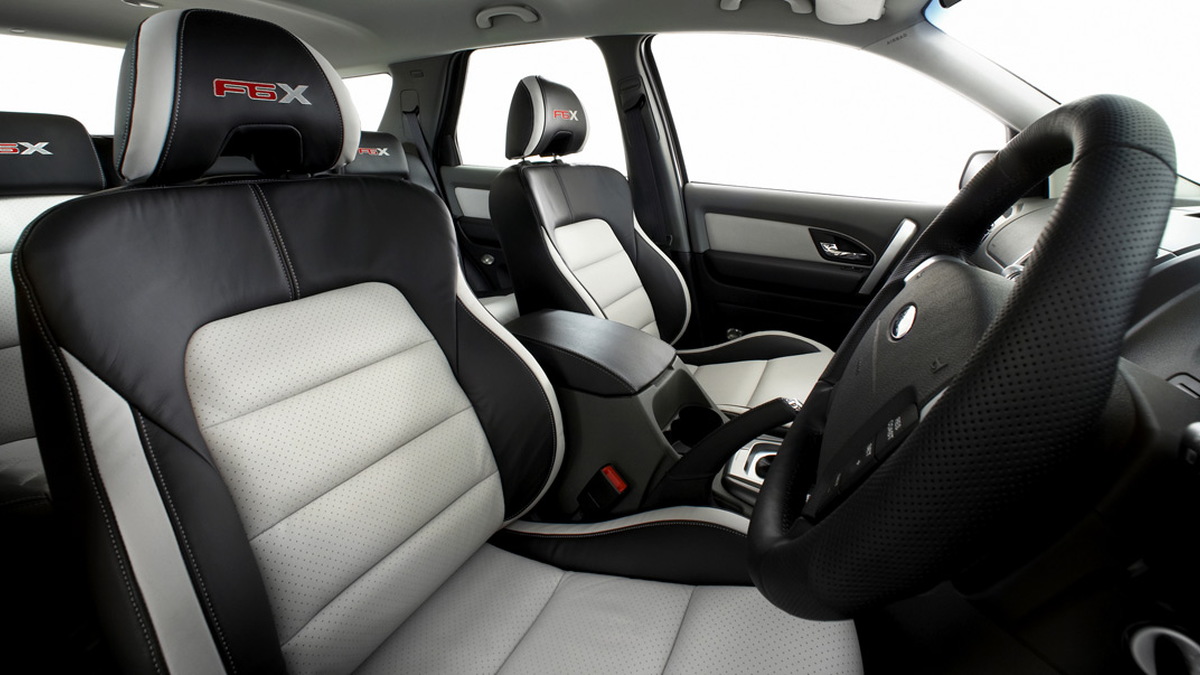 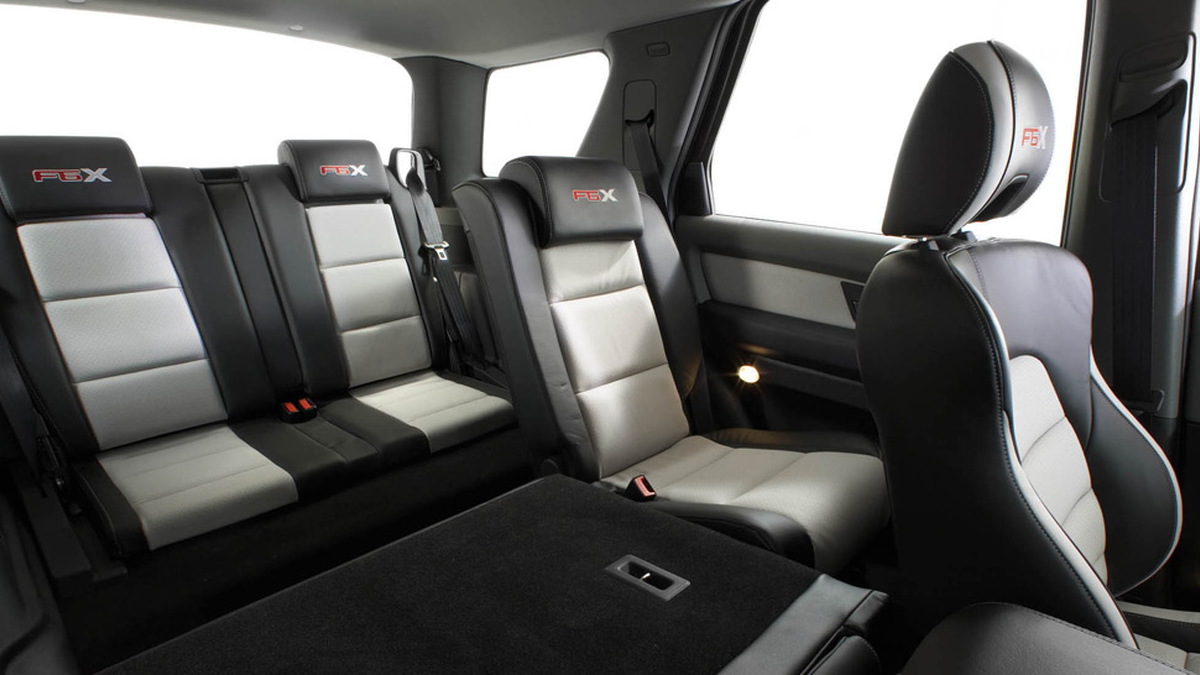 4
photos
Just days ago, Ford Performance Vehicles revealed the Falcon-based Cobra sedan and ute. Today, at the 2007 Australian International Motor Show in Sydney, FPV unveiled its first-ever vehicle not based on a Falcon, the F6 X. The new SUV is based on Ford's Territory family of vehicles. Images and details leaked last Friday have proved accurate, though incomplete.

The driving experience is sure to please the power-hungry, with a 270kW (362hp) turbocharged inline six-cylinder DOHC 4.0L engine. Torque is abundant, with 550Nm (405lb-ft) on tap, routed to the ground through a ZF six-speed automatic and full-time All-Wheel-Drive system. Inside, two-toned leather adds luxury to match the performance under the hood. The uniquely styled seats are especially eye-catching, and are carried throughout the vehicle, even to the third row on the seven-seat variant. The instrument cluster sports the FPV-logo, a redline indicator, and special "FPV blue" illumination. Additional custom touches include alloy pedals and a unique build plate mounted on the gear selector surround. Dual climate control and color-screen Interior Command Centre (ICC) finished in a metallic accent color complete the package.

Performance and luxury are not the sole considerations of the F6 X design, however. Safety also plays a major role. With Dynamic Stability Control (DSC), traction control, four-channel ABS, and Electronic Brakeforce Distribution (EBD) standard, keeping the F6 X rubber-side down and between the lines is a much surer proposition, even in emergency situations. Side-curtain airbags, and dual-stage driver and front passenger airbags are also standard equipment. Six-pot Brembo calipers all around receive a special FPV ABS and DSC calibration to match the re-tuned suspension, which not only provides a sportier feel, but safer and more predictable control of the vehicle.

As if FPV's first non-Falcon-based design weren't unique enough, some additional styling cues have been added to the exterior, ostensibly to help distinguish the ultra-SUV from the plain-jane Territory. The high-tech mesh grille, rear spoiler, and alloy running board are the primary differences. Upon closer inspection, the F6 X-exclusive hood air scoop, front and rear skid plates, door mirror scalps, and 18-inch five-spoke alloy rims will stand out. Available colors include Winter White, Platinum Haze, and the enigmatic Seduce, Dash, Nitro, Sensation, Ego, and Silhouette.

Expect to see the FPV brute in Australian showrooms in early 2008. Pricing is not yet released. Look forward to more details in the coming weeks as the launch draws nearer.