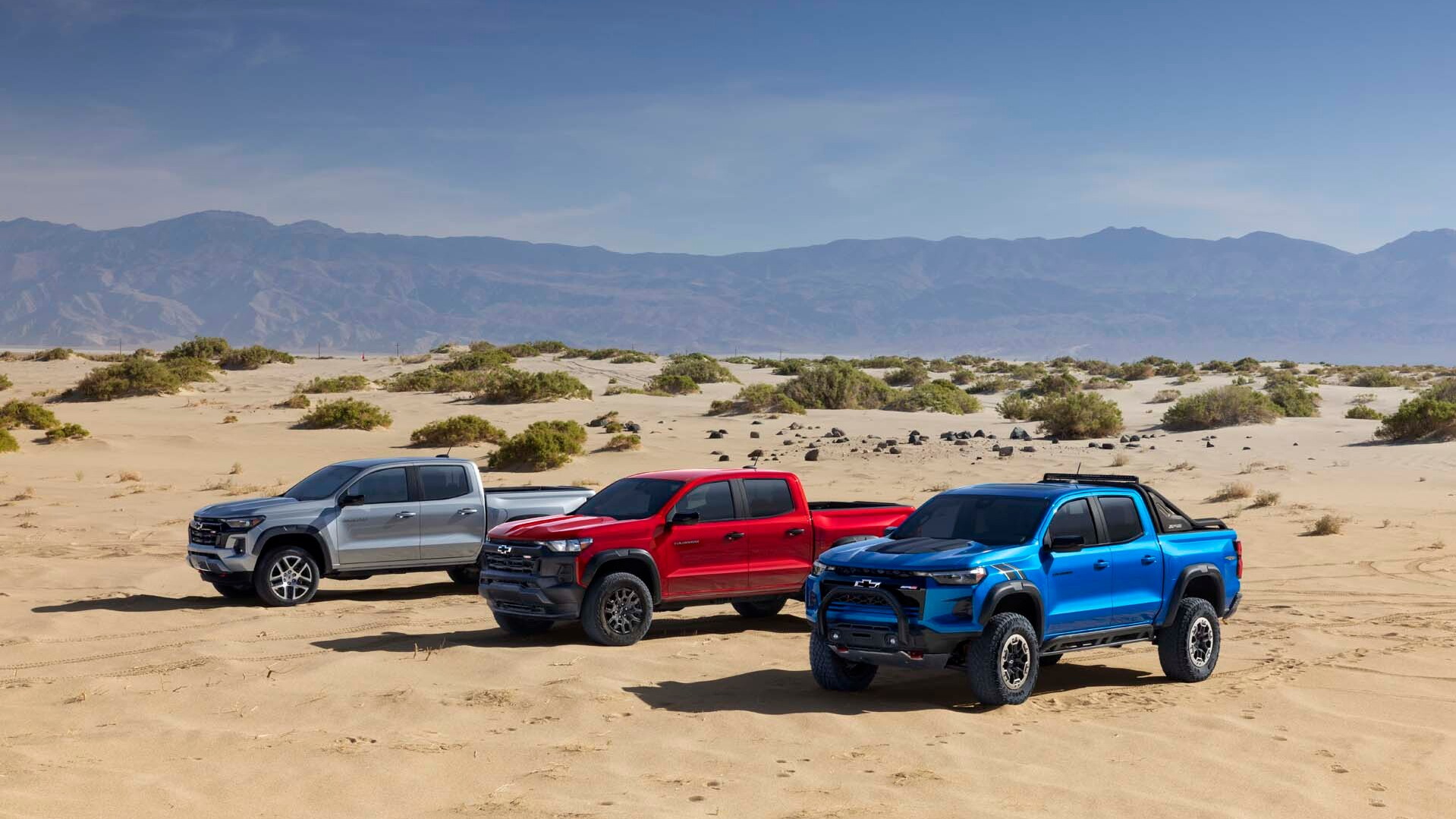 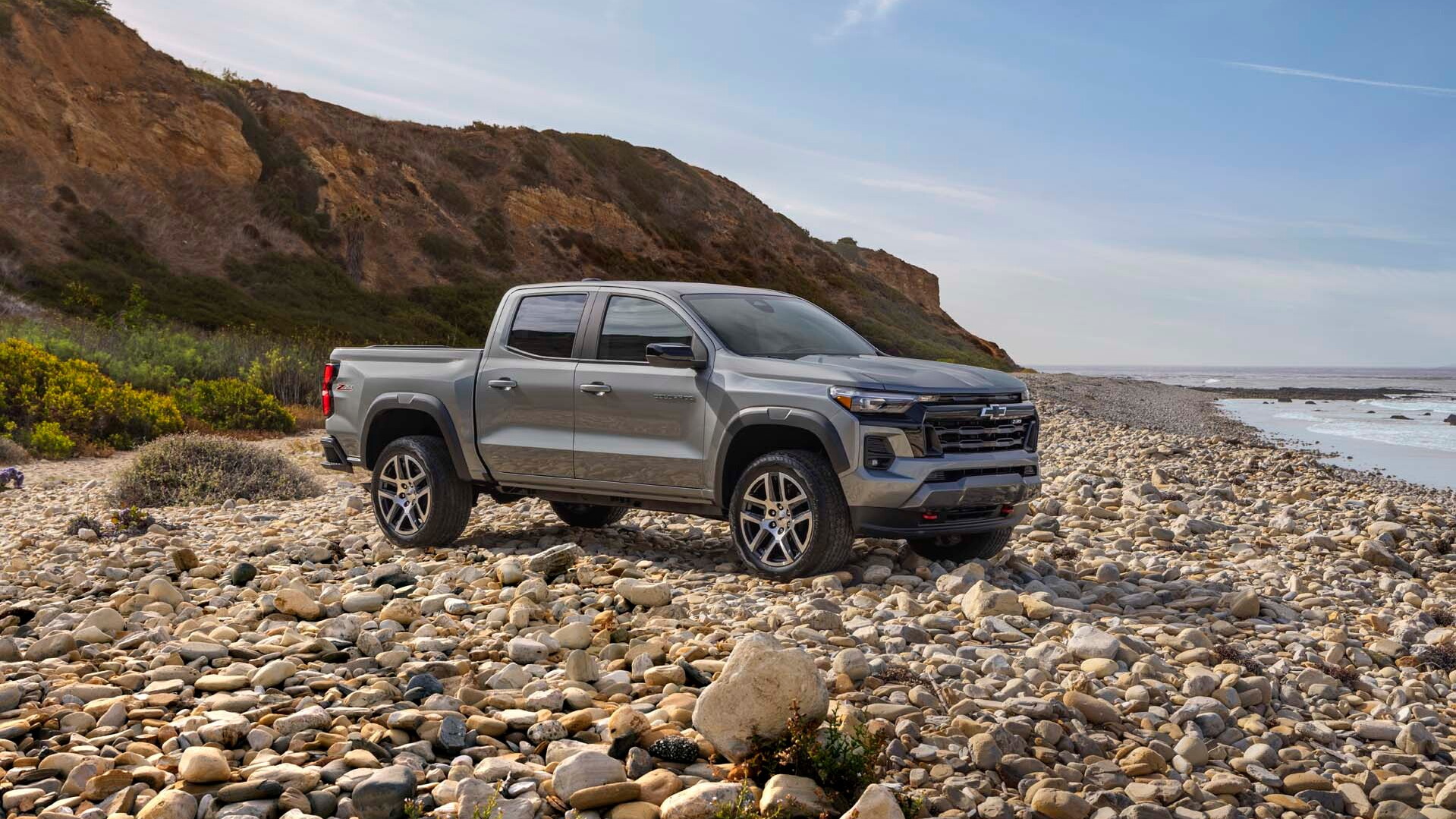 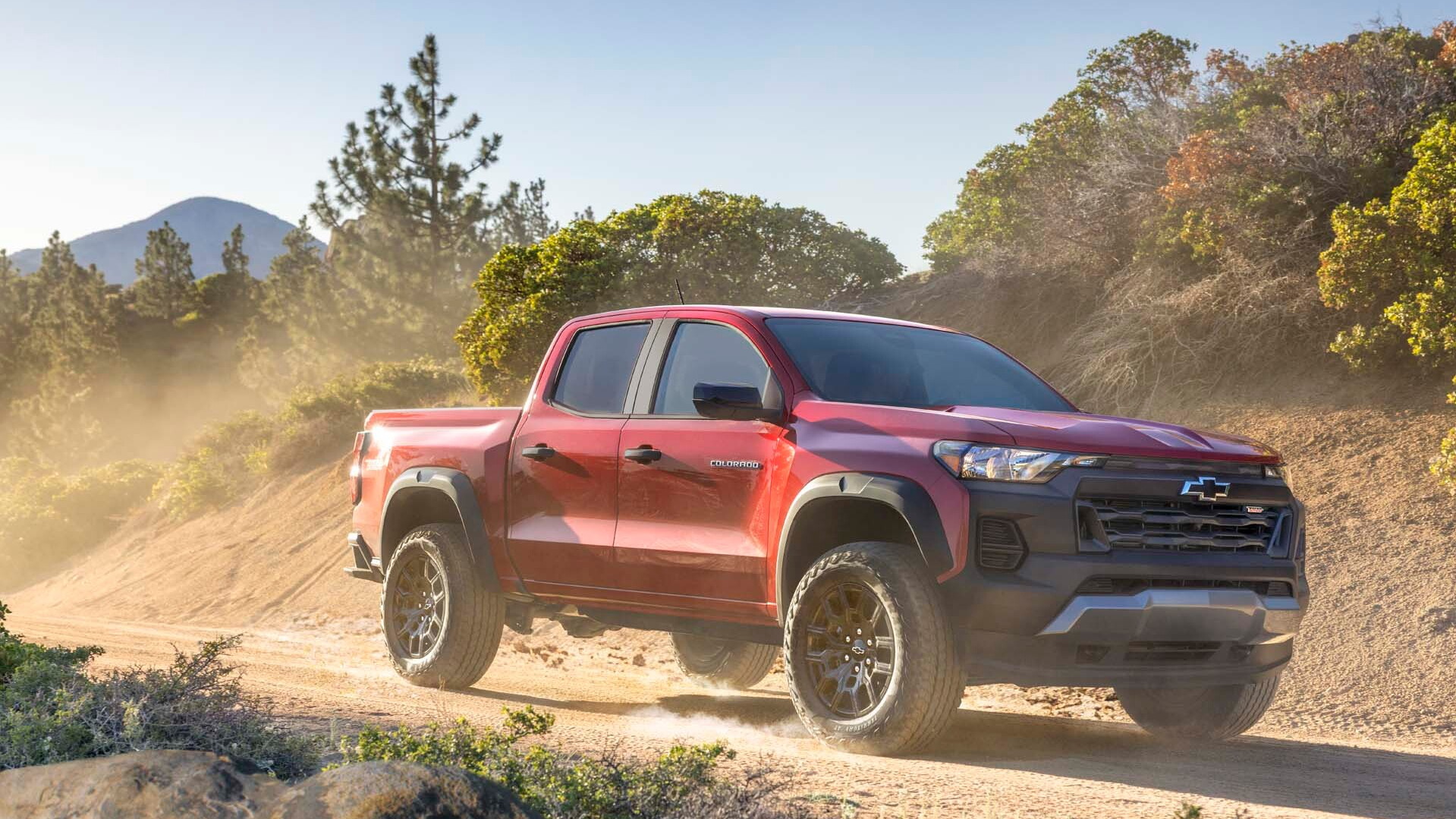 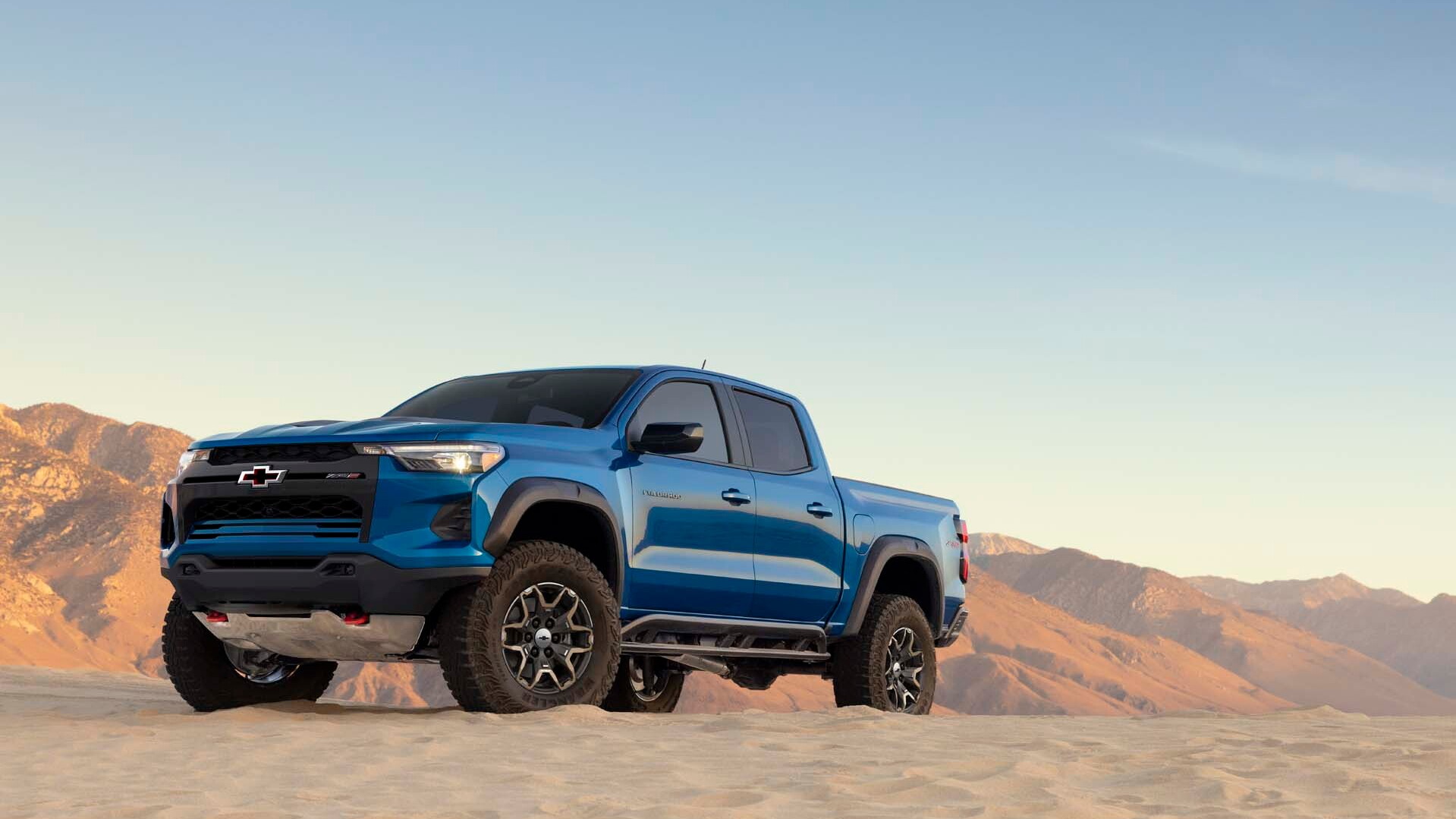 The redesigned 2023 Chevrolet Colorado was revealed on Thursday with a new powertrain, platform, design, and technology. The simplified lineup consisting of five trim levels will only come in a crew-cab, short-bed configuration when it enters production in the first half of 2023 in Wentzville, Missouri.

All turbo-4 all the time

The current Colorado's inline-4, V-6 and turbodiesel are all history. Every 2023 Colorado will be powered by a 2.7-liter turbo-4, but output varies based on the trim. Chevrolet wouldn't comment on whether the turbodiesel engine option will return for the next-gen Colorado.

Base WT (Work Trucks) and LT models will have 237 hp and 259 lb-ft of torque. A Plus version of this same engine with 310 hp and 390 lb-ft of torque will be standard in Z71 and Trail Boss models while available in the WT and LT trims. The enthusiast-oriented off-road ZR2 model returns and has 310 hp and 430 lb-ft of torque from a high-output version of the turbo-4, which will be available as an option on all trims with a confusing caveat: WT and LT buyers will have to option up to the Turbo Plus and then from there the High-Output engine when ordering their trucks.

Every Colorado will have a new 8-speed automatic transmission. Kevin Luchansky, assistant chief engineer for the 2.7-liter turbo-4, told Motor Authority that development of the new 8-speed transmission focused on the engine's torque band. A 10-speed wasn't used or needed as it would have more ratios than necessary, Luchansky explained.

Chevy's given the Colorado up to five drive modes including Normal, Tow/Haul, Off-Road, Terrain, and Baja depending on the trim. Terrain mode enables one-pedal driving, or crawling, just like the larger Silverado 1500 ZR2, while Baja mode was developed for high-speed desert running. ZR2 models continue to feature front and rear mechanical lockers.

WT and LT trucks with the base turbo-4 will be rated to tow up to 3,500 lb and have a 1,684-lb payload rating. Every Colorado with the two more powerful variants of the turbo-4 will be rated to tow up to 7,700 lb except the ZR2, which is rated to tug 6,000 lb. Payload ratings range from 1,587 lb in the Trail Boss and Z71 to 1,151 lb on the ZR2, which means payload is up except on ZR2 (which is down 99 to 39 lb depending on the current truck's configuration). That tow rating matches the current Colorado, but only when equipped with the turbodiesel; most Colorados were only rated to tow 7,000 lb when equipped with the V-6.

The 2023 Colorado utilizes a new frame. The front axle has been moved forward 2.9 inches versus the current truck, and the wheel base is 3.1 inches longer translating to a larger engine compartment. The bolt pattern for the wheels now matches that of the current Silverado 1500.

Trail Boss models feature a factory 2.0-inch lift while ZR2 models feature a 3.0-inch factory lift. Off-road Trail Boss and ZR2 models have over a 3-inch wider track up front than WT, LT, and Z71 models thanks to different control arms (cast iron on the ZR2) and knuckles. New for the 2023 model are rear outboard shock mounts for the ZR2 models. While ZR2 models continue to feature Multimatic DSSV shocks, they've been redesigned using the upgraded shocks from the Silverado ZR2 as the starting point, but with different sizing and tuning for the smaller Colorado. Every ZR2 will feature aluminum skid plates to protect the vulnerable bits such as the radiator, engine oil pan, and transfer case, but continues to lack a fuel tank skid plate. The Chevrolet team noted the current truck lacks a skid plate for the fuel tank and has encountered zero issues during testing.

The redesigned bed features eight standard tie-downs and up to nine optional accessory tie downs in addition to four stake pockets, six 2x6-inch bed pockets, and four 2x8-inch bed pockets for various hauling needs. An available tailgate storage cubby can be optioned on all trims and is standard on ZR2 models. Chevrolet's creatively enabled the tailgate to be positioned halfway up to help carry certain longer loads of up to 500 lb.

Keeping it in the family

The exterior of the 2023 Colorado has more in common with the 2024 Silverado EV electric pickup than it does the refreshed 2022 Silverado 1500. The lighting elements, which are LED on Z71 and ZR2 models, are mounted up high in the front. The hood profile appears to be higher than the current truck with more sculpting. Chevy said the new hood profile enables better forward visibility, though we'll have to see for ourselves once we get behind the wheel. Lower trim WT and LT models ride on 17-inch wheels while Z71 and Trail Boss models roll on 18-inch wheels with the latter featuring 32-inch all-terrain tires. Customers will be able to mount a variety of wheels thanks to Chevy's use of the Silverado 1500's bolt pattern.

Inside every 2023 Colorado features an 8.0-inch digital gauge cluster and 11.3-inch touchscreen infotainment system with wireless Apple CarPlay and Android Auto capability. The Colorado's dashboard features a similar design as the refreshed 2022 Silverado 1500 with a horizontal theme and hard buttons and knobs for climate and audio controls.

Every 2023 Colorado will come standard with automatic emergency braking with pedestrian detection and active lane control. Blind-spot monitors, rear cross-traffic braking, adaptive cruise control, and a surround-view camera system will be available. Chevy will offer up to 10 camera views including a new underbody camera on Z71 and ZR2 models. Notably, GM's Level 2 hands-free driver assist system called Super Cruise will not be available on the 2023 Colorado.

Chevrolet said pricing and fuel economy information will be released closer to launch in 2023.