Located in Detroit, Michigan, is an old rusted 1953 Chrysler New Yorker cab that’s still in service – yet only for scheduled tours to explore the motor city.

Devin Sykes, the owner of the classic Chrysler and Vintage Taxi Tours, has always had a passion for Detroit history as a car-enthusiast who has owned 20 pre-1980 classics from ‘20’s sedans to ‘60’s Chrysler muscle cars.

His interest in cars came from his grandfather, Sykes told us in an interview, who would buy him little toy cars. While in high school, Sykes worked as a general mechanic, and in a custom hot-rod shop before finishing college.

After graduating with a degree in physics engineering, a degree that Sykes chose because his school didn’t offer an automotive program, he packed his bags and moved to Detroit in hopes of landing a job with one of the major automotive companies. 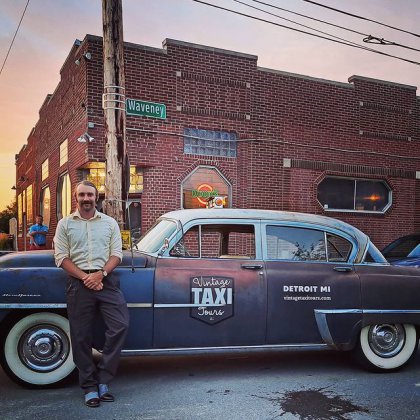 Skyes with his ’43 New Yorker

Sykes started working behind the counter at an Advanced Auto Parts, where he met engineers and employees working at Chrysler and GM who’d come into the shop. This ‘in’ landed him a job as a mechanical engineer at one of the Big 3 automotive manufacturers.

After some time in Detroit, Sykes’ idea to start Vintage Taxi Tours started to come to fruition:

“I just thought it was kind of strange that you can go to New York and take a pizza tour in an old taxicab, but in Detroit you can’t explore the city in an antique automobile? So it kind of just seemed obvious.”

Luckily, Sykes had the perfect classic car to run the show – a 1953 Chrysler New Yorker. 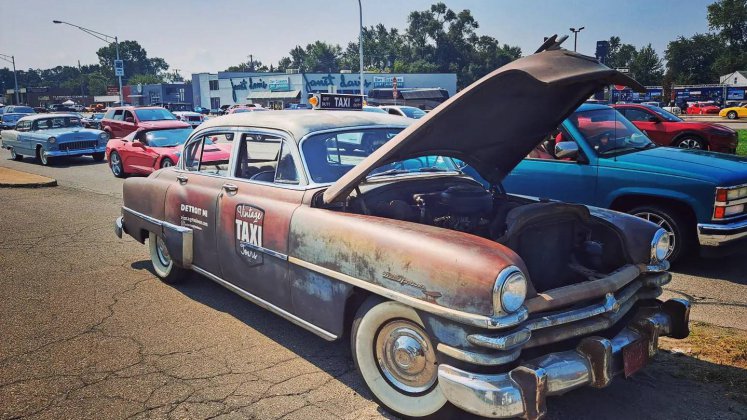 “It was missing the fuel pump, all the tires were flat, but he had a title for it and everything and I was just like, yeah this cool,” Sykes told us. “So, I had a flatbed drag it home and I spent a year working on it.”

The cab is powered by its original 331cid V8 “Fire Power” Hemi engine linked to its “Fluid-Drive” M6 4-speed transmission that still uses a clutch but can shift between two gears automatically.

Between the rust, the car wears the original Submarine Gray paint, a classic on and off-duty taxi light on the hood and Vintage Taxi Tours signage on the body.

While looking at the photos, you might be surprised to learn that this taxicab made a quick cameo in Steven Soderbergh’s period film "No Sudden Move" with actor Don Cheadle riding inside. 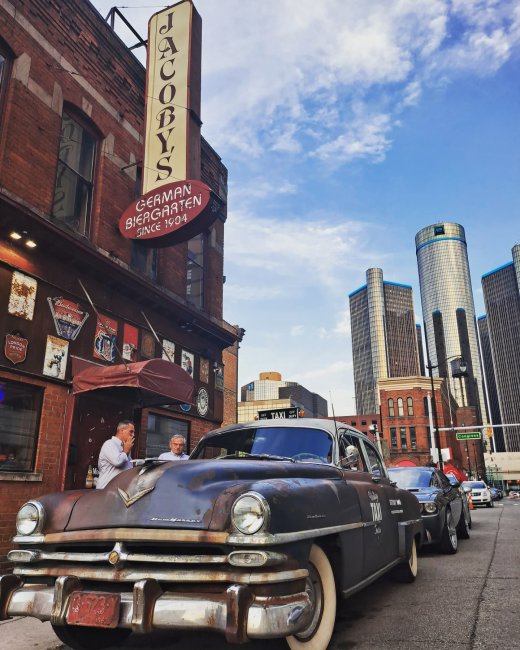 “Last summer, we were driving around, and I had the signage and stuff on the car and some guy pulled up next to us and was like, ‘Hey, we want to use this car in a movie,’” Sykes shares the story.

“I just assumed it was like some guy making an Instagram music video or something but he said, ‘No seriously, it’s a Hollywood production. It’s a real movie.’”

Sykes gave the guy his number, thinking he’d never hear from him again, but low and behold, the studio called and set up a time to get his car prepped for filming. The studio put wax over his decals and more traditional taxicab signs on top so Sykes could easily remove it after filming. 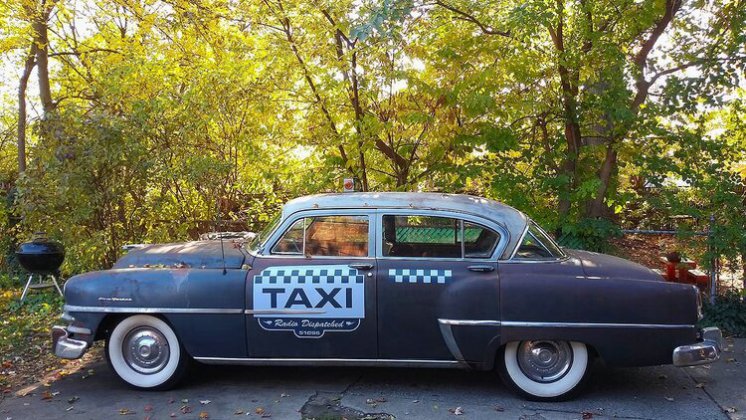 Skyes’s taxicab as it appears in the movie

“I was confused. I was like, why do you guys want to use this rusty Chrysler in your period movie? But the scene is nighttime and it’s raining so you can only tell that it’s a little beat up.”

Sykes uses his movie-star Chrysler New Yorker to take tourists, or even locals who want to learn more about their city, on tours. His offers a handful of different tour options, including an Automotive Empire tour, Detroit Essentials tour, and even a Bootlegger tour.