Rivian's first product, the 2022 R1T full-size pickup, is in production and initial impressions, including from us, are positive.

This seems to have bode well for the company's efforts to raise additional funds, as the recent initial public offering shows.

Rivian set the price of a share in its IPO at $78, which was higher than what many expected. Nevertheless, the IPO was oversubscribed and when shares started trading on Wednesday on the Nasdaq Global Select Market index, under the ticker symbol RIVN, the price exploded to the upside.

Rivian's share price ended the day at $100.73, a rise of 29%. Based on the number of shares outstanding, Rivian's market value is now $85.9 billion, which roughly matches General Motors at $86 billion and overshadows Ford at $77.4 billion. Tesla, of course, is much bigger, with its valuation at more than $1 trillion.

We'll remind you that Rivian delivered just 156 examples of the R1T as of the end of October and plans to get that figure up to 1,000 units by the end of 2021.

Rivian managed to raise $11.9 billion by going public, which makes Rivian's IPO the seventh biggest on record. The figure is likely to go higher as underwriters have an option to purchase up to 22.95 million additional shares at the $78 opening price. 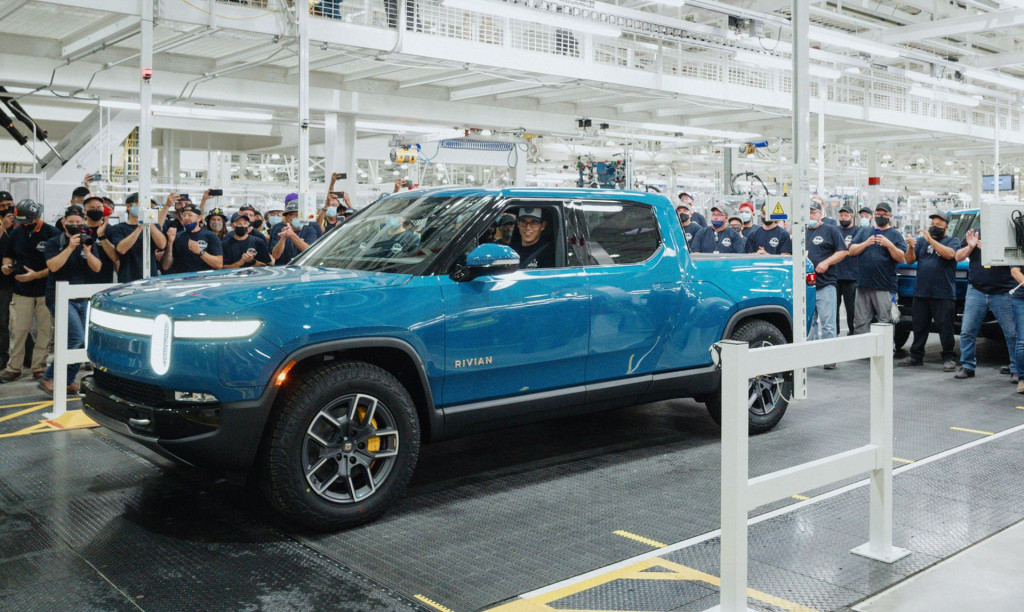 Demand for Rivian shares was always going to be strong given the current frenzy around listings of EV startups. However, unlike many of its rivals, Rivian is already building a credible product, and the company has indicated that key investor Amazon, which had a 20% stake in Rivian prior to the listing, along with other equity investments, plans to buy more shares. Ford is also a key investor in Rivian.

Both companies also have deals with Rivian for vehicle-development programs. Amazon has commissioned Rivian to build 100,000 electric delivery vans. A handful of vans were delivered earlier this year, and Amazon hopes to have the full fleet operational by 2030.

Ford has said it will use Rivian's skateboard platform for an unspecified future EV. Rivian was also set to build a Lincoln EV at its Illinois factory, but that project was canceled in April 2020 as the coronavirus pandemic took hold.

In earlier filings, Rivian revealed that it had been burning through serious cash as it ramped up for September's start of production of the R1T, with losses for the first half of 2021 coming in at $994 million, which was almost the total amount the company lost in 2020 and about double what it lost in 2019.

Most of the costs were associated with R&D spending, and this churn is set to continue through the end of 2023. The company expects its losses to total about $8 billion by that date, as it looks to expand its production capacity, including battery production, and add new models. Rivian has said that after the U.S., it will focus on expanding to Western Europe before expanding to Asia.

A conventional IPO is unusual for an EV startup, as most have opted for the quicker route of going public through so-called "reverse mergers" with special purpose acquisition company (SPAC) shell corporations.