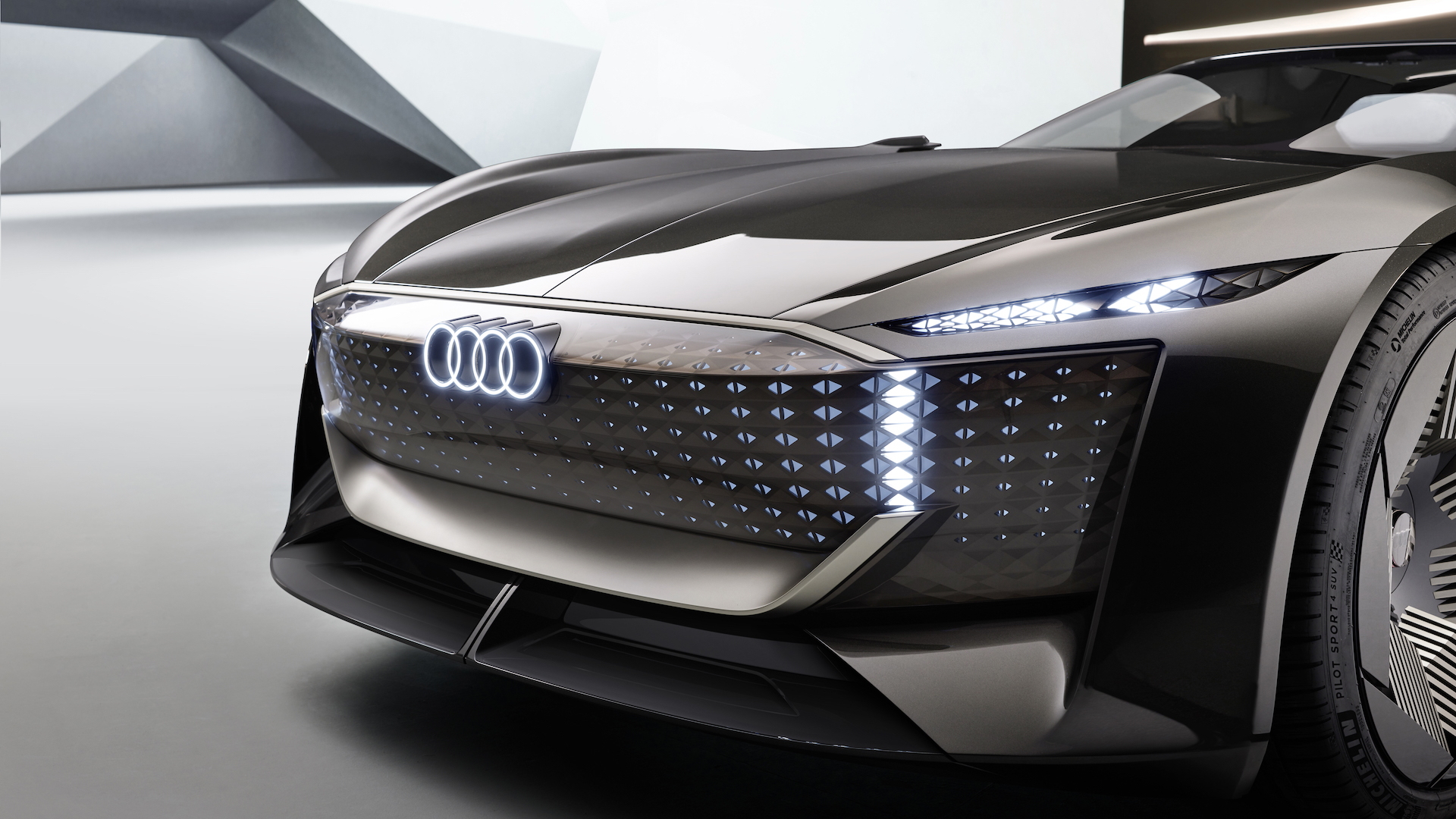 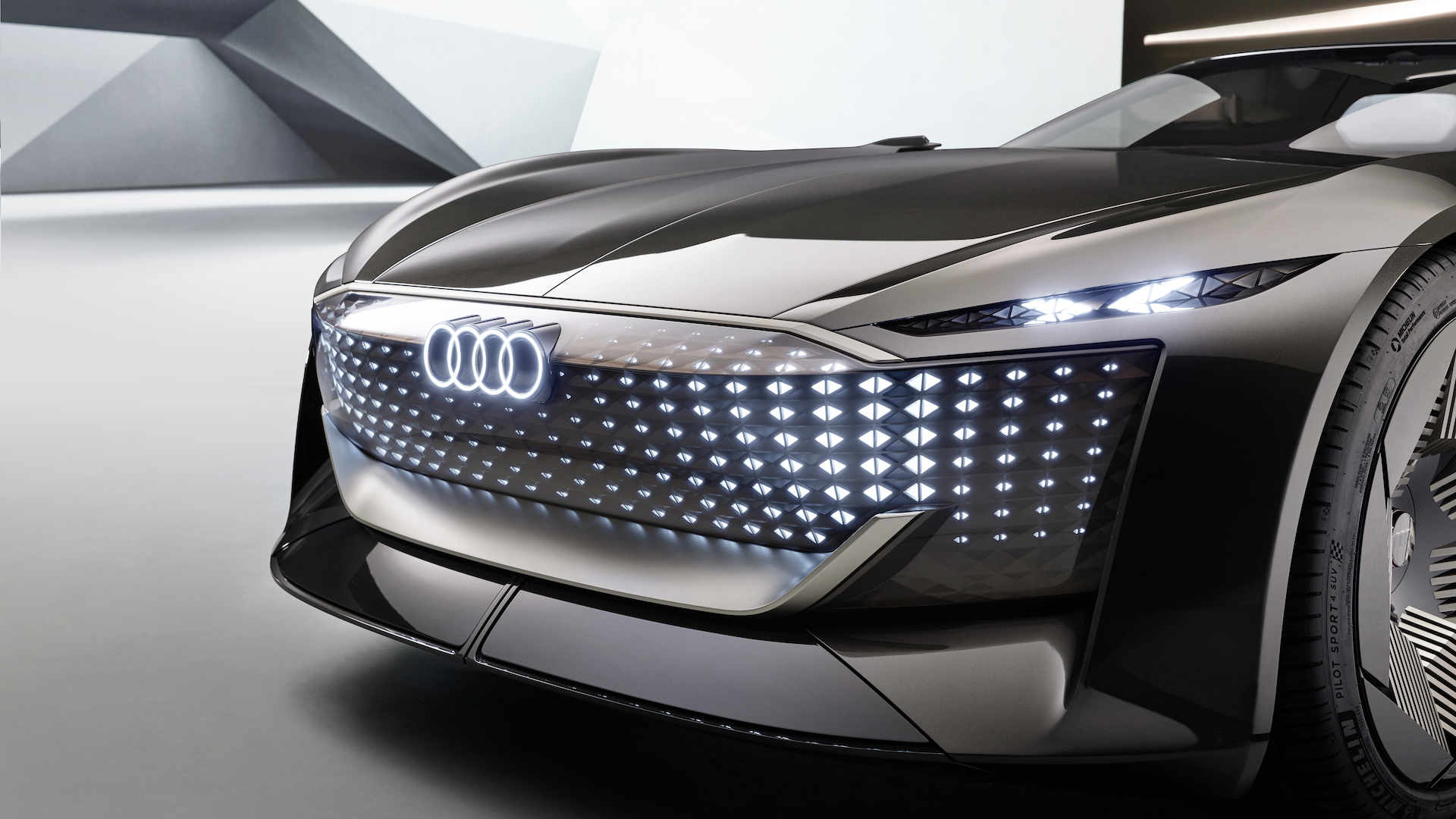 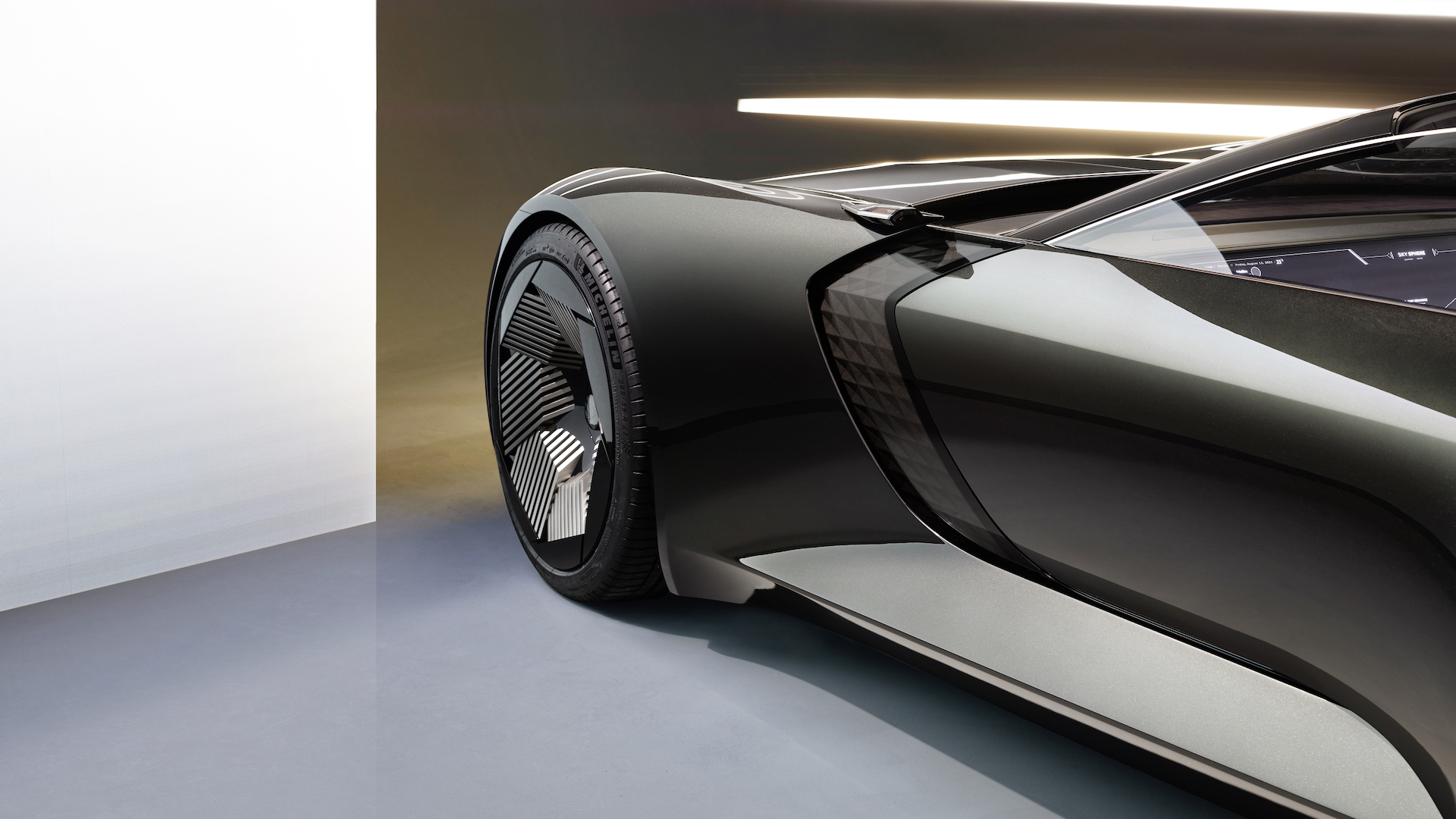 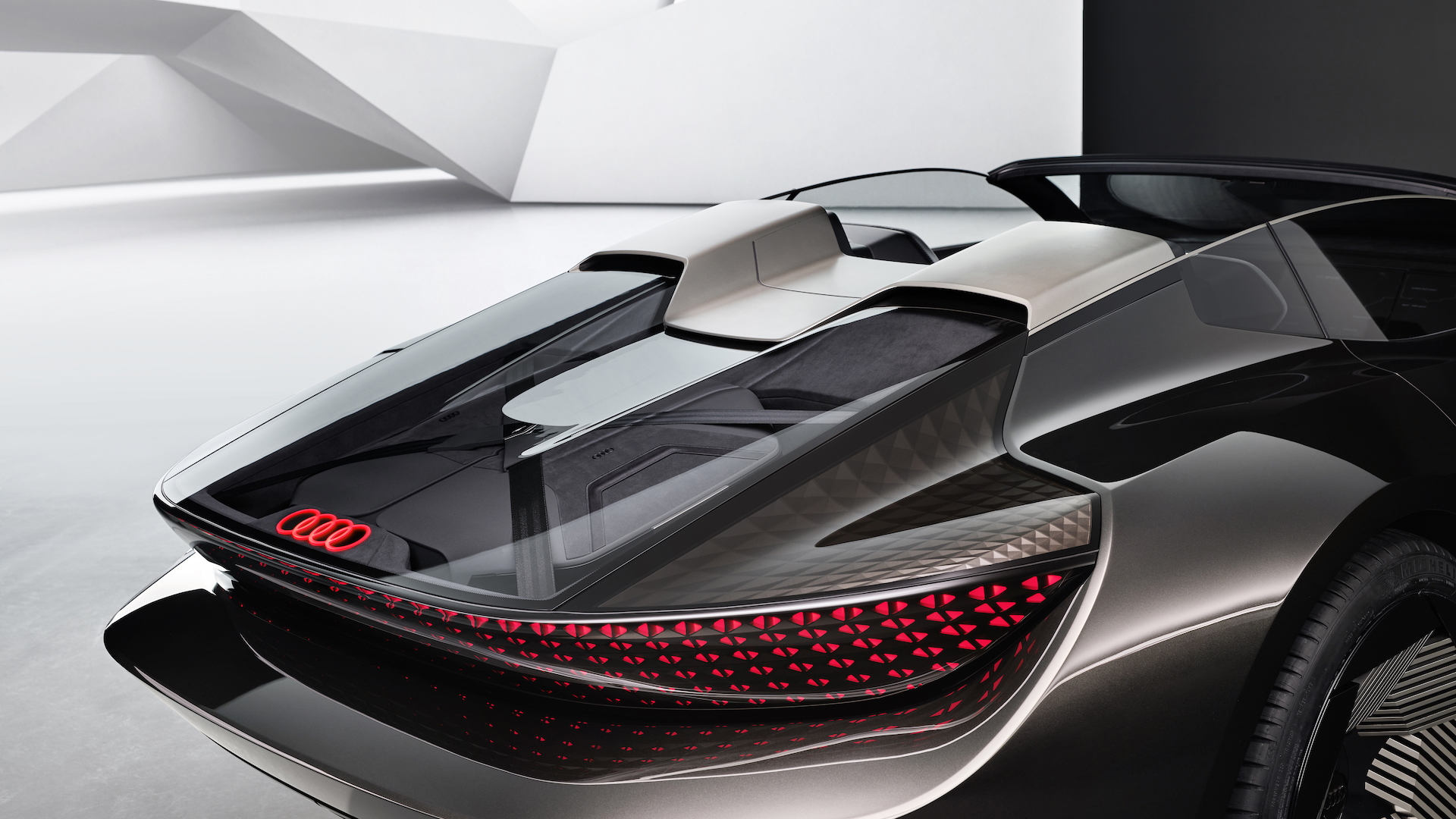 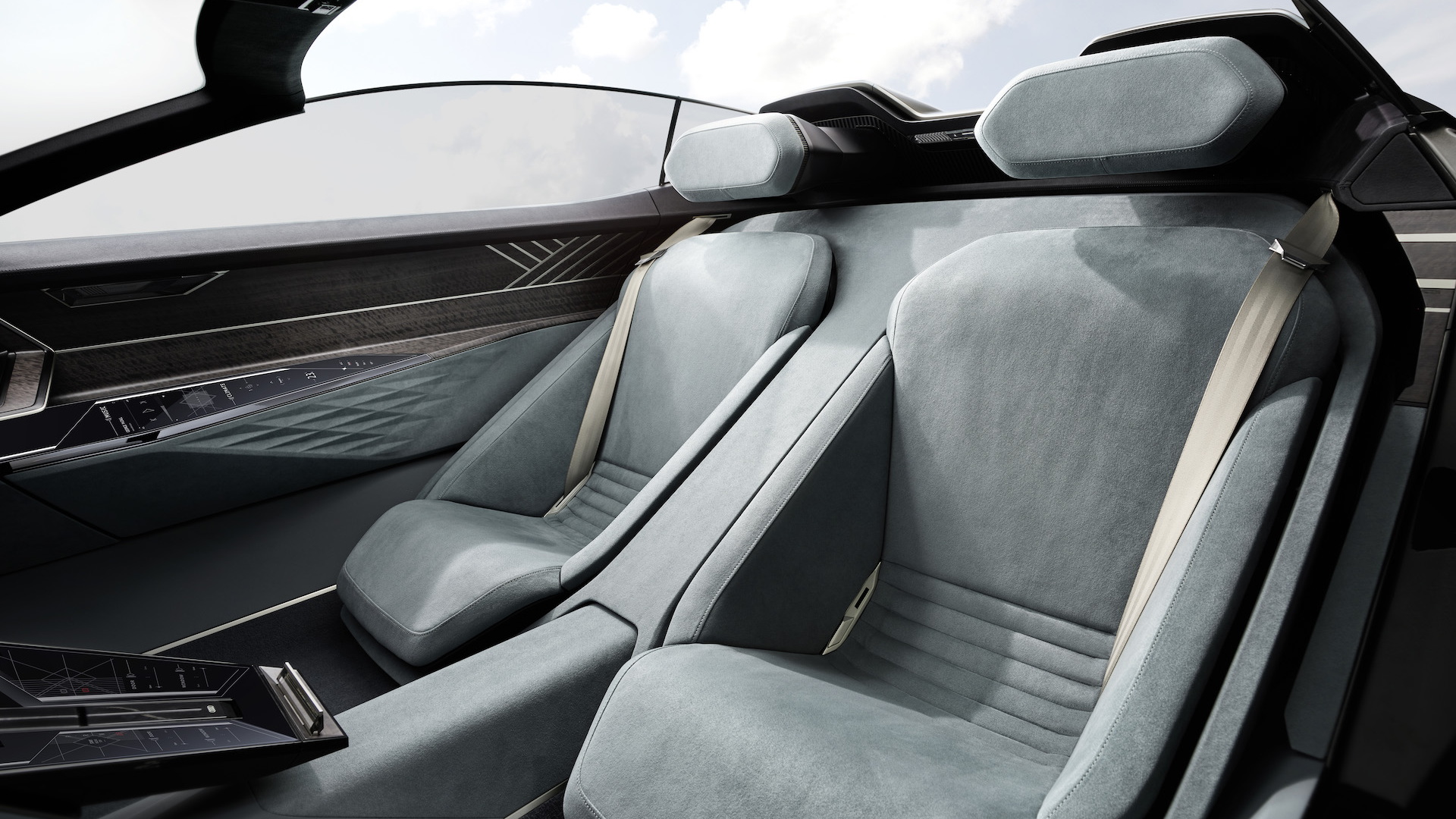 "The future starts with imagination," Henrik Wenders, Head of the Audi Brand, said about the Audi Skysphere concept introduced on Tuesday during Monterey Car Week.

A flight of fancy that previews the future of Audi design language, the Skysphere is an automotive Transformer with a variable wheelbase. In GT mode, it's a long-wheelbase two-seat roadster that drives autonomously. In Sports mode, it's a short wheelbase electric sports car. Electric motors slide the body and frame components into one another to change the wheelbase, varying it between the size of an Audi A8 L and an A5.

In GT mode, the two passengers sit behind a dash outfitted with touchscreens 55.7 inches wide; there is no steering wheel or pedals. In this mode, the car can connect to the internet and run video conferences or stream movies. The car doesn't actually have Level 4 autonomous driving capability, but an Audi representative said the brand expects it in the second half of this decade.

In Sports mode, the steering wheel rises from under the dash, the screen on the driver's side slides to the right, and pedals emerge. Sports mode also shortens the wheelbase by 9.8 inches, with the space coming out of an area in front of the A-pillars, and drops the ride height by 0.4 inch.

Propulsion is provided by a single rear-axle-mounted electric motor that makes 623 hp and 553 lb-ft of torque. It's fed by an 80-kwh battery that Audi says would provide about 311 miles of range according to the European WLTP cycle. The battery is actually made up of two modules, the larger one below the floor ahead of the rear axle and the smaller one in the central tunnel. Audi quotes a 0-62 mph time around four seconds for the 3,968-lb car and says the power would be easy to harness because 60% of the weight is on the rear. Audi has 270-kw charging for its E-Tron GT, but it didn't quote charging times for the Skysphere concept.

The Skysphere's suspension features double wishbones front and rear, as well as three-chamber air springs and adaptive dampers at all four corners. Rear-axle steering shortens the turning radius, and a steer-by-wire system allows for variable weights and ratios. The car also has an active suspension that can raise or lower the tires to compensate for the road surface.

Audi has no plans to build the Skysphere—just like it never built 2018's PB18 E-Tron concept—so the most important aspect of the car is its styling. Designed in Audi's studio in Malibu, Calif., the Skysphere features a different take on the brand's singleframe grille up front. Here, however, it's not a grille. Instead, it's a sensor array and LEDs that tell onlookers if the car is in GT or Sports mode based on the color of the lighting. The rear has a similar lighting scheme to show the mode.

The Skysphere's body draws in along the sides and has wide front and rear fenders to create a classic Coke bottle shape. The doors open suicide-style. Audi designer Gael Buzyn said the car was inspired by the Horch 853 of the 1930s, as were the 23-inch wheels, which represent a modern take on wire spokes. The overall proportions include a long hood and short, high deck that Audi says combines elements of a speedster and a shooting brake. It has a soft top and sits 48.4 inches high. Look for Audi to use some of the body surfacing and front end design in future vehicles.

Technology and sustainability characterize the interior. The seats are upholstered in a microfiber fabric, and other materials include eucalyptus wood trim and synthetic leather surfaces.

The Audi Skysphere will be revealed to the public in Pebble Beach, Calif., during Monterey Car Week. It's the first of three Audi concept cars, with the Grandsphere arriving later this year and the Urbansphere coming in 2022. Both will further explore the possibilities of autonomous driving.

For more from Monterey Car Week, check out our dedicated hub.