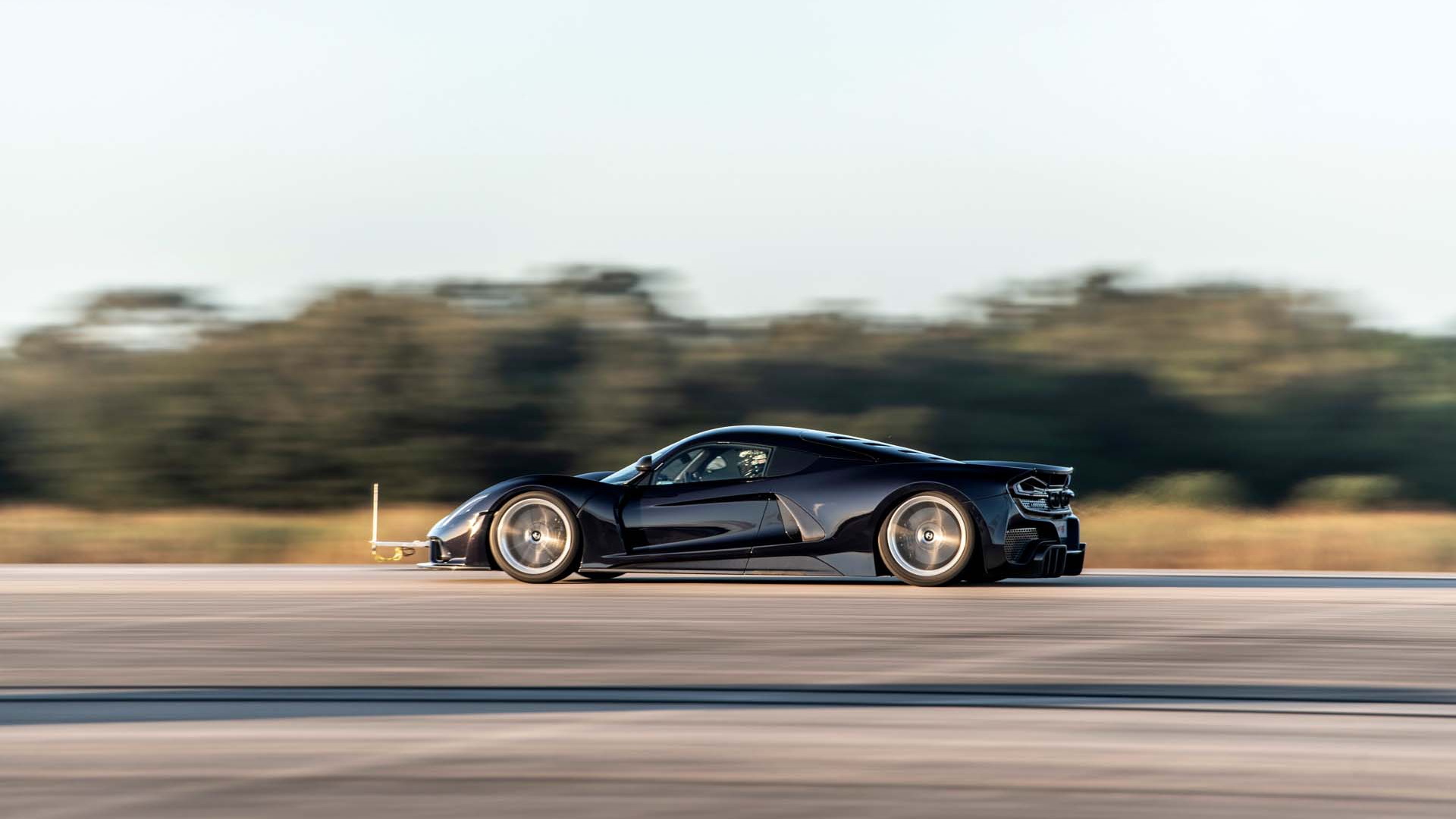 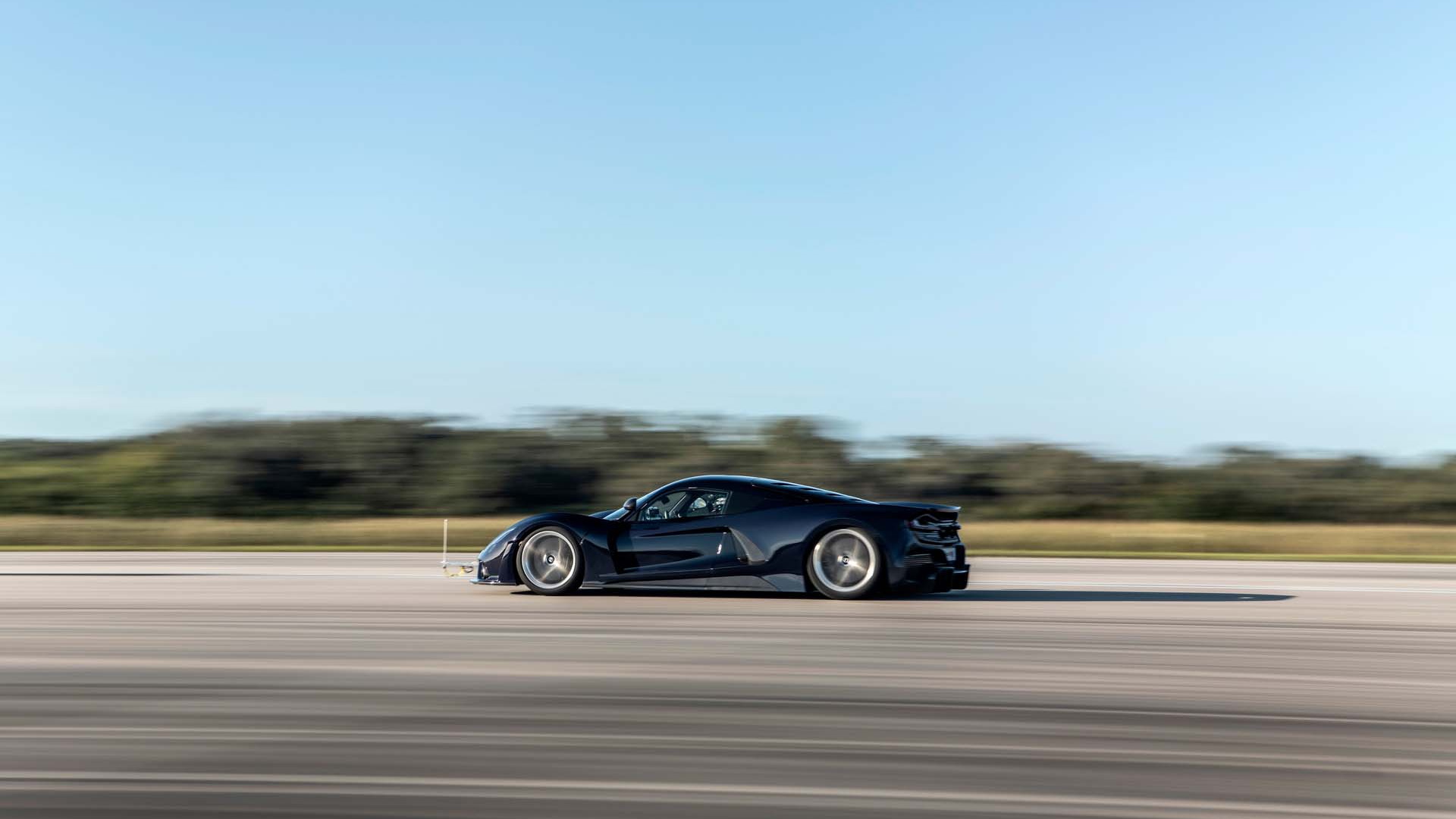 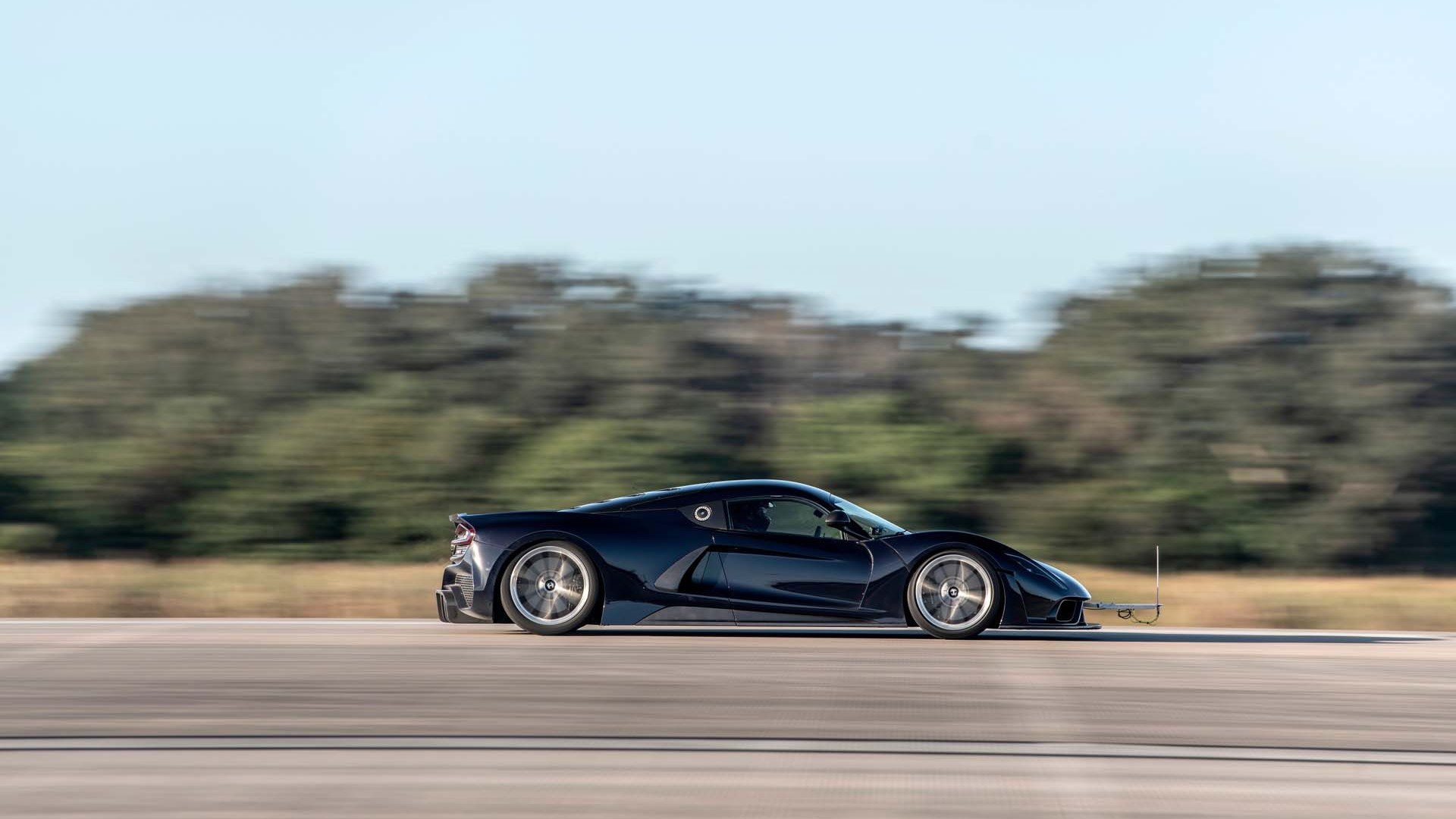 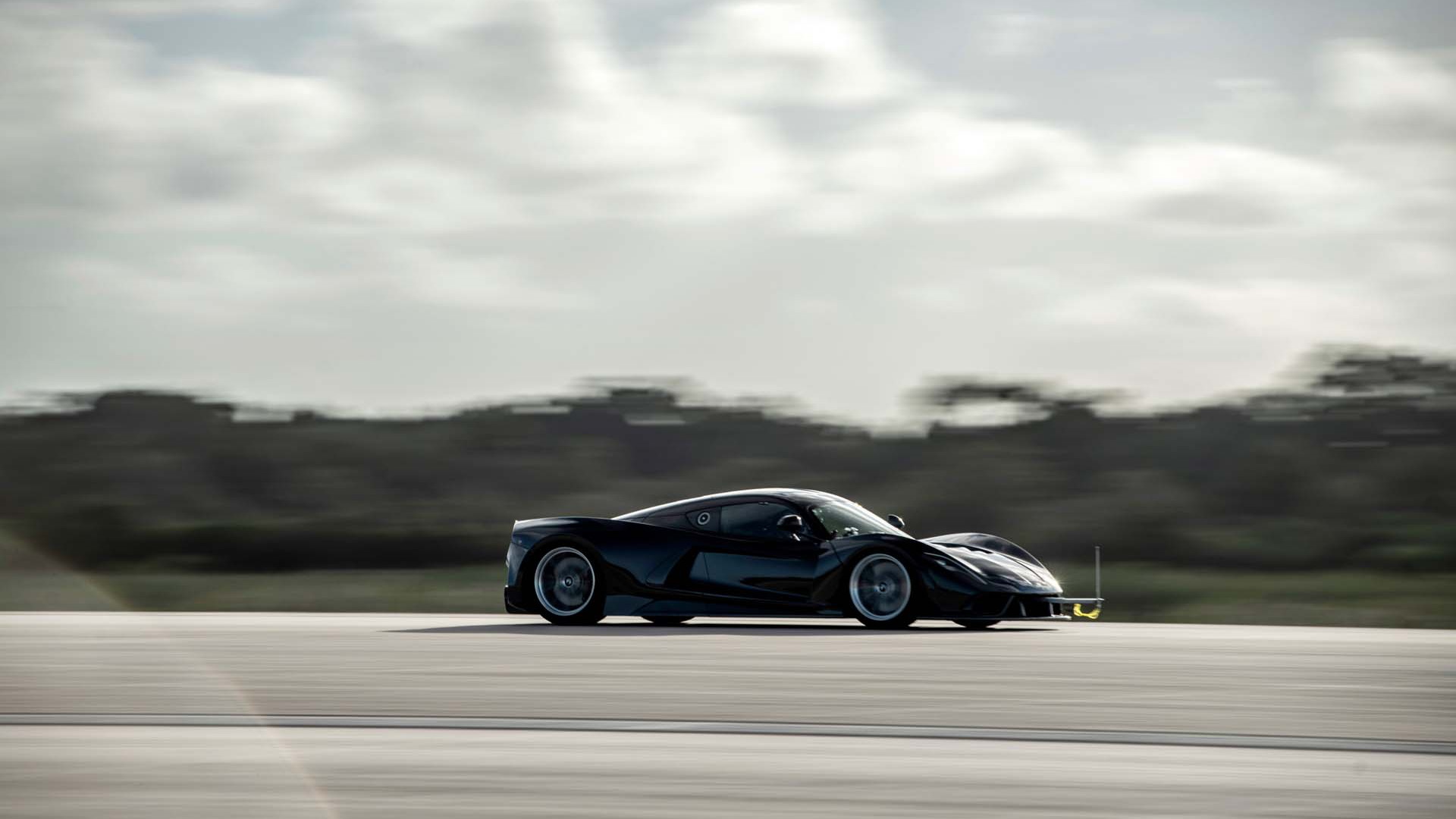 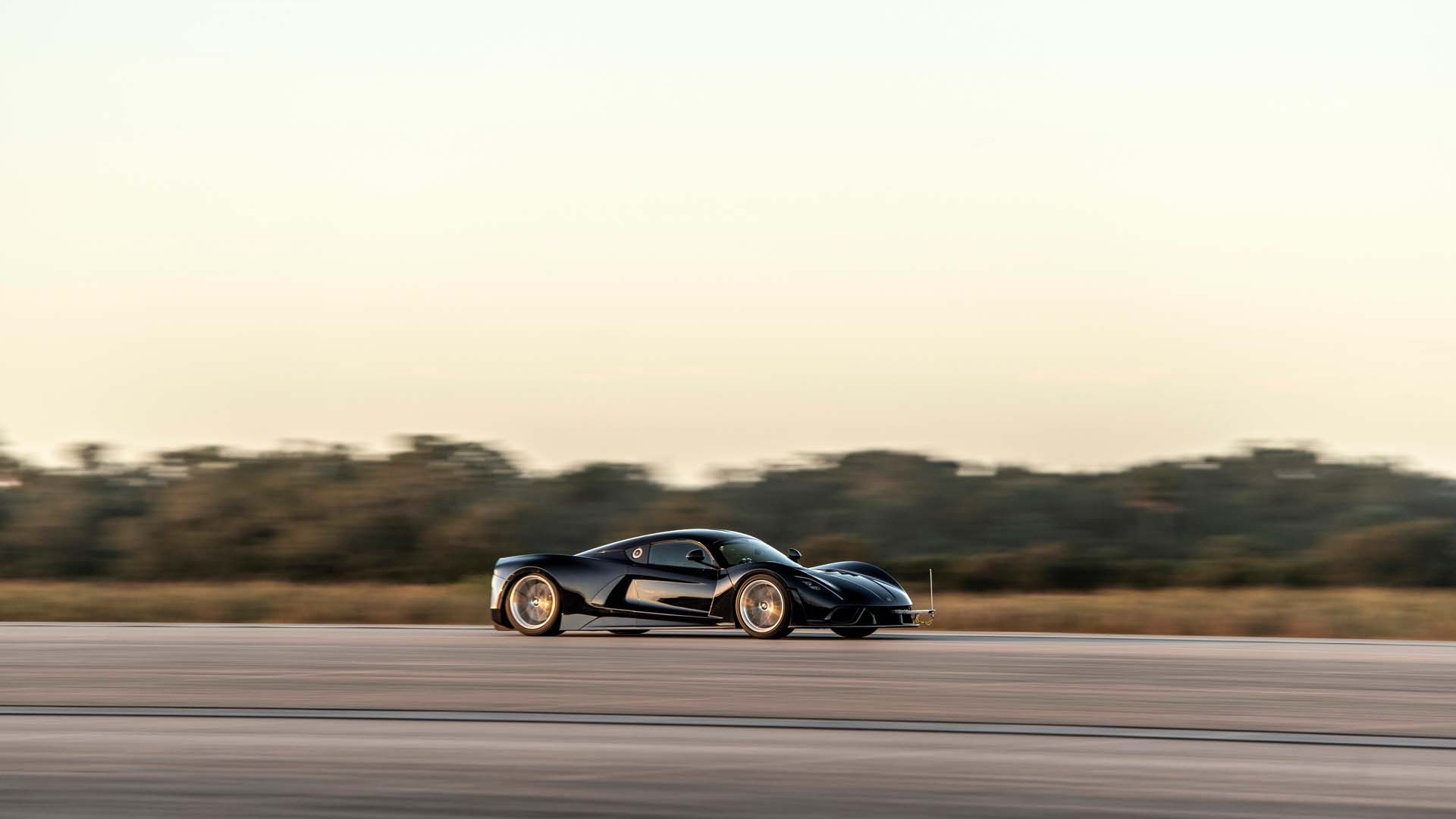 Development of the Venom F5 hypercar continues as Hennessey's team marches toward its goal of hitting a 311-mph top speed.

On Monday, Hennessey released a video that shows the team performing high-speed stability testing at a claimed speed of over 250 mph, with veteran GM engineer John Heinricy behind the wheel. The hypercar was in F5 Mode, which uncorks the engine's full 1,817 hp on E85. A Hennessey spokesperson told Motor Authority that the run was about testing at full power and that no official timing was carried out as this wasn't a test of the vehicle's outright speed.

Hennessey plans to see how fast the Venom F5 will go in 3.2 miles at NASA's runway in Florida in the coming months.

The first of three phases of high-speed testing for the Hennessey Venom F5 was completed ahead of the hypercar's public debut at the Amelia Island Concours d'Elegance last May. During that time, Hennessey announced the Venom F5 hit 200 mph during aerodynamics testing.

That speed—achieved on a 2.2-mile runway at a former United States Air Force base in Arkansas—is about two thirds of the Venom's claimed 311 mph top speed, but that test also wasn't about breaking records. The team were focusing on mid-speed refinement and coast-down behavior, Hennessey said at the time.

The Venom F5's 6.6-liter twin-turbo V-8 was also restricted to 900 hp, only about half its target output of 1,817 hp. With the taps fully opened, Hennessey claims the V-8 will also produce 1,193 lb-ft of torque, and rev to 8,500 rpm (although it's restricted to 8,200 rpm outside the special F5 mode) while running E85. Power is handled by a CIMA 7-speed single-clutch automated manual transmission.

In addition to the unused Air Force base, the testing program has included stops at Hennessey's own Sealy, Texas, site and the U.K.'s Silverstone Circuit, where the first of 24 Venom F5 hypercars was built. Additional testing sessions will take place at Laguna Seca and Circuit of the Americas (COTA), according to Hennessey. There is no word yet on the focus of the third phase of testing.

As with the Venom GT, Hennessey is looking to break the production car land speed record, this time by blowing past 300 mph. The company previously said it was considering a top-speed run on a closed section of Texas highway, using a customer car. An alternative could be during the planned test on NASA's runway. Stay tuned.