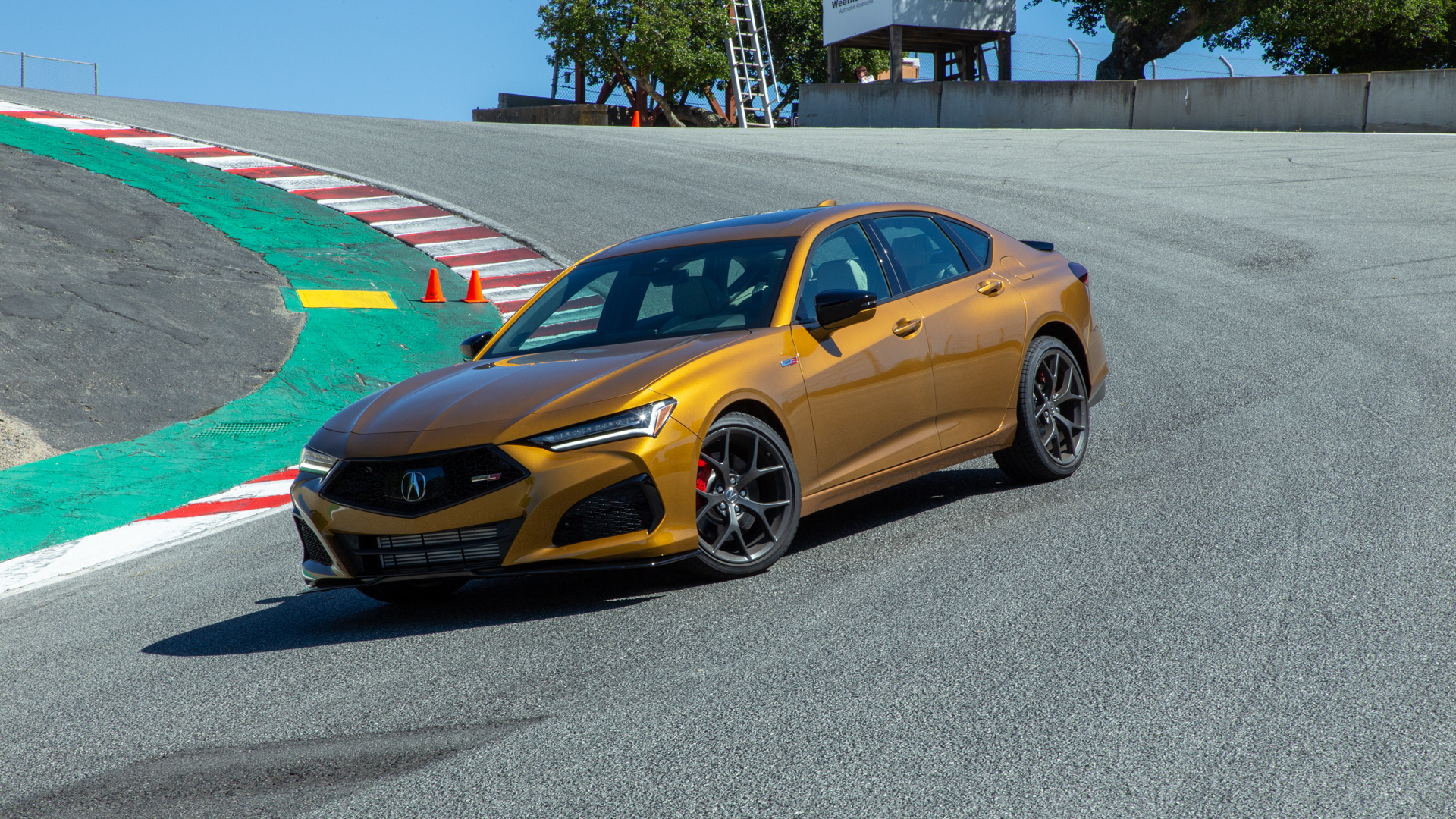 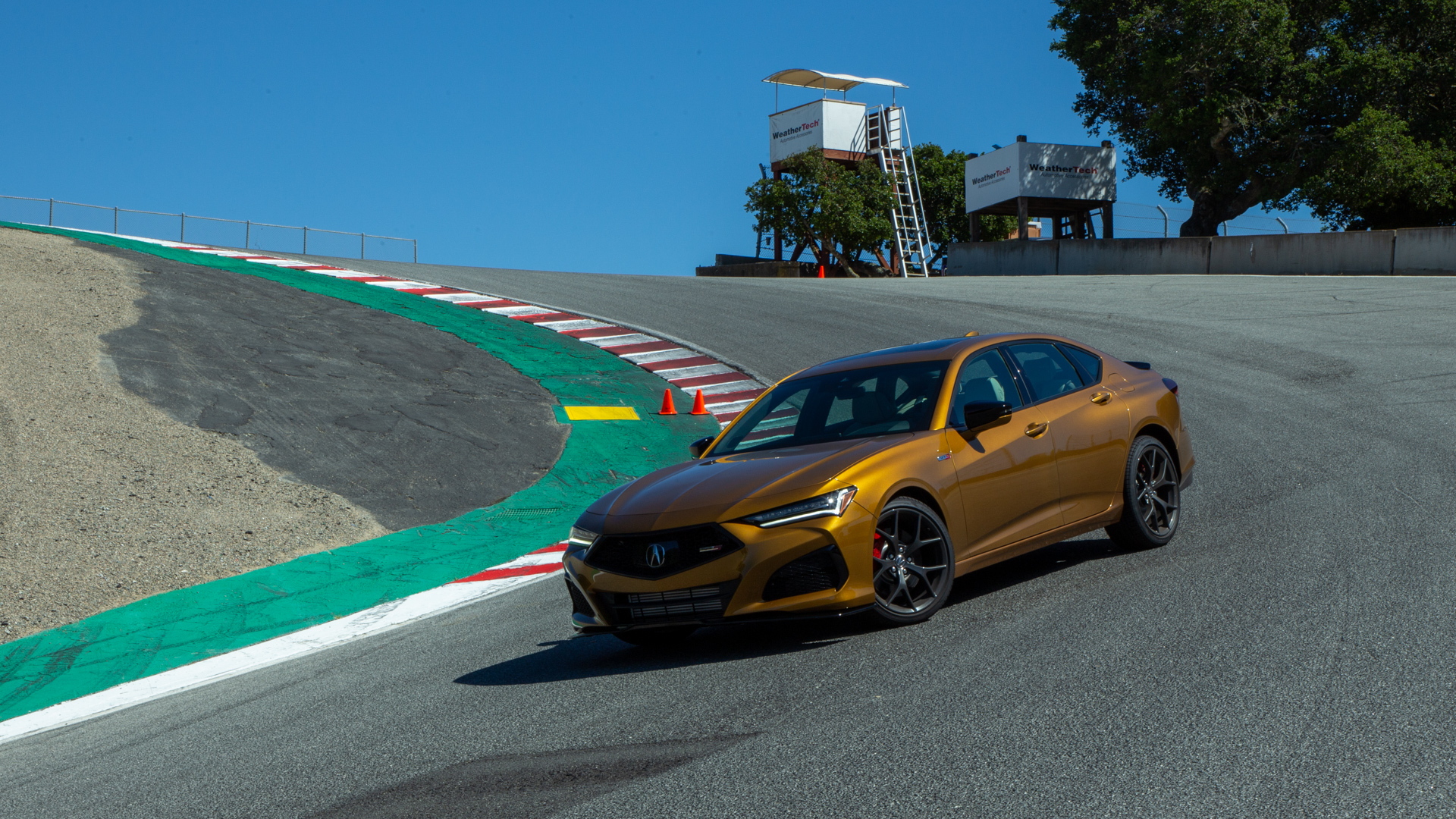 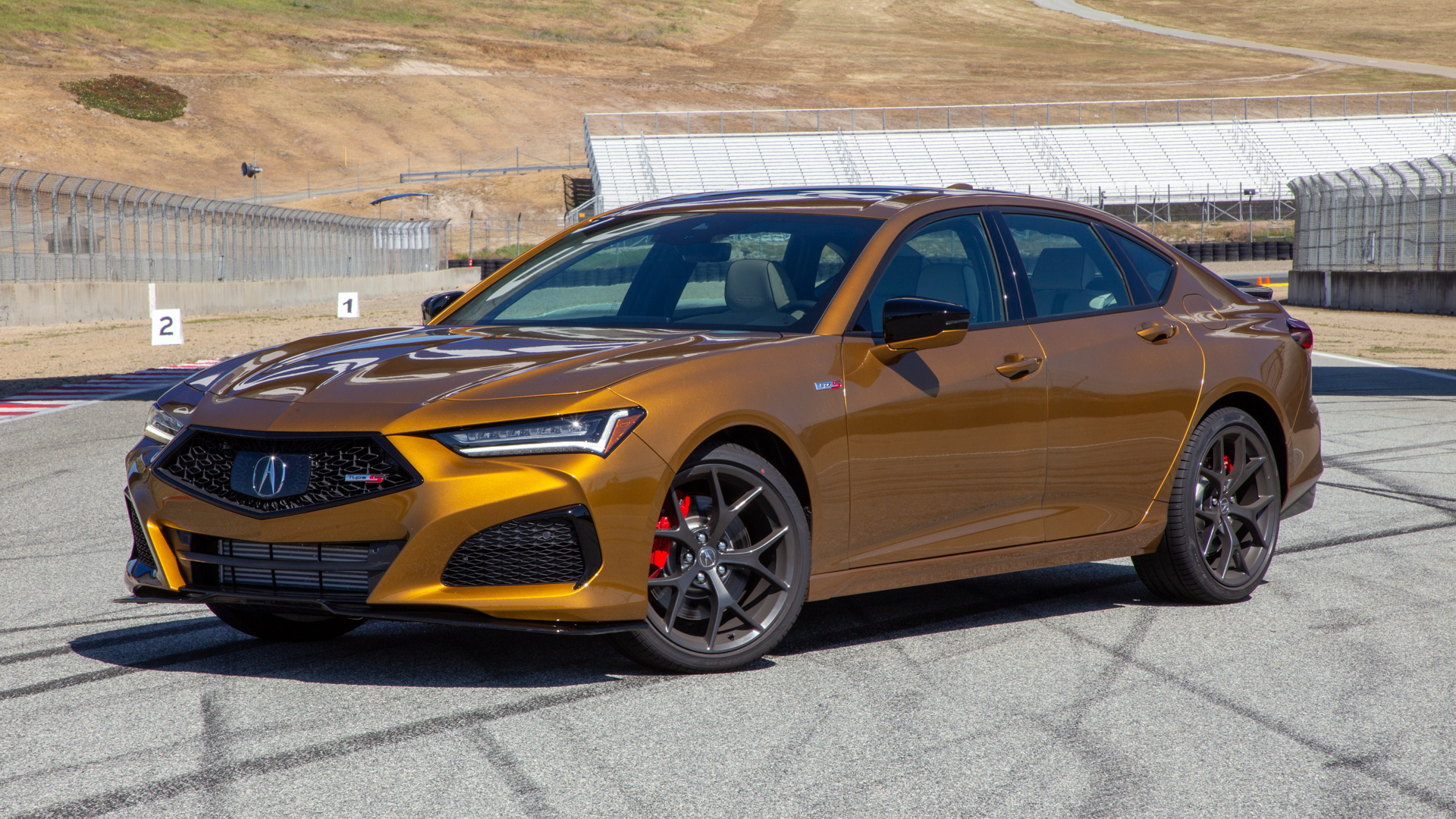 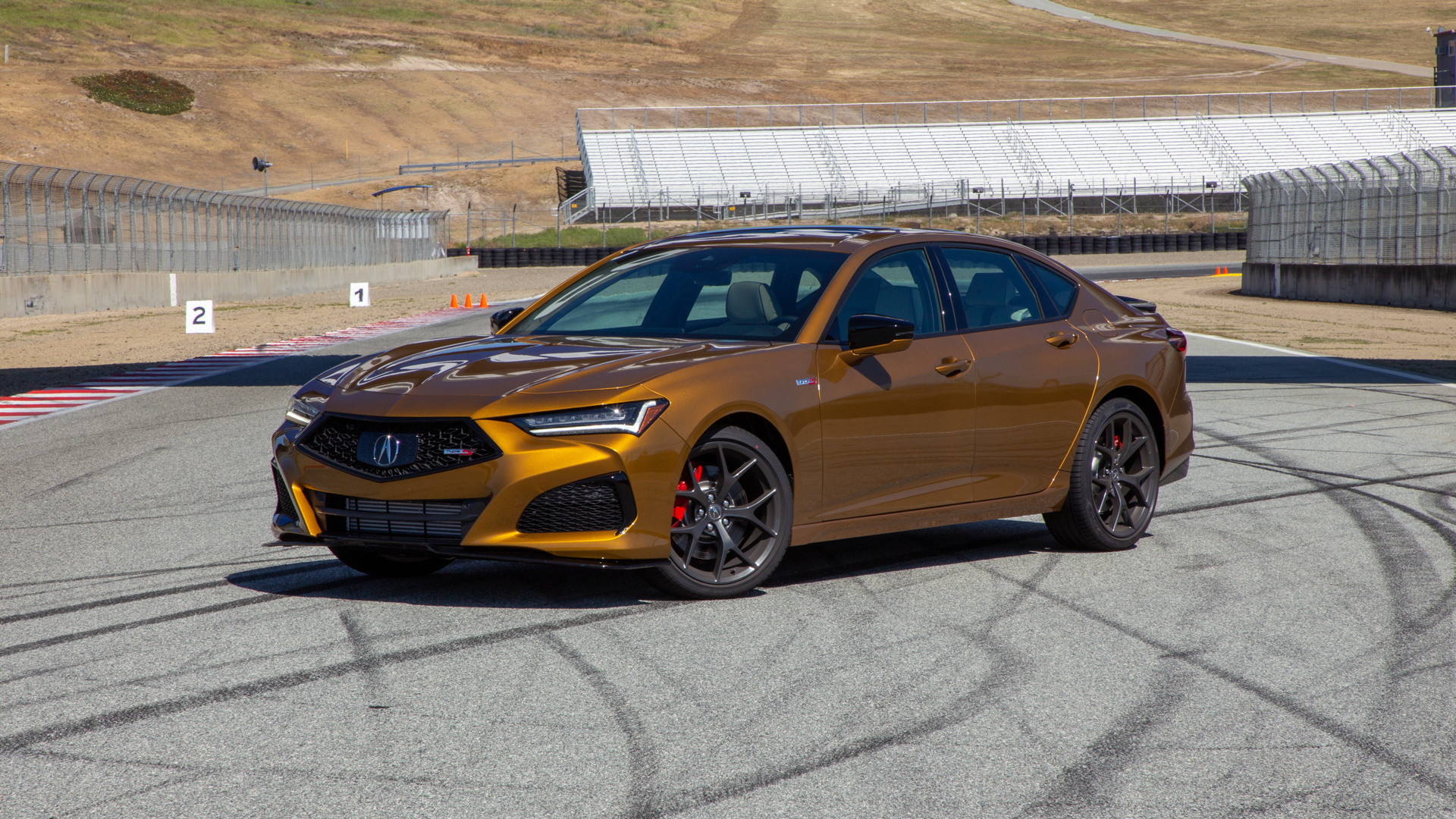 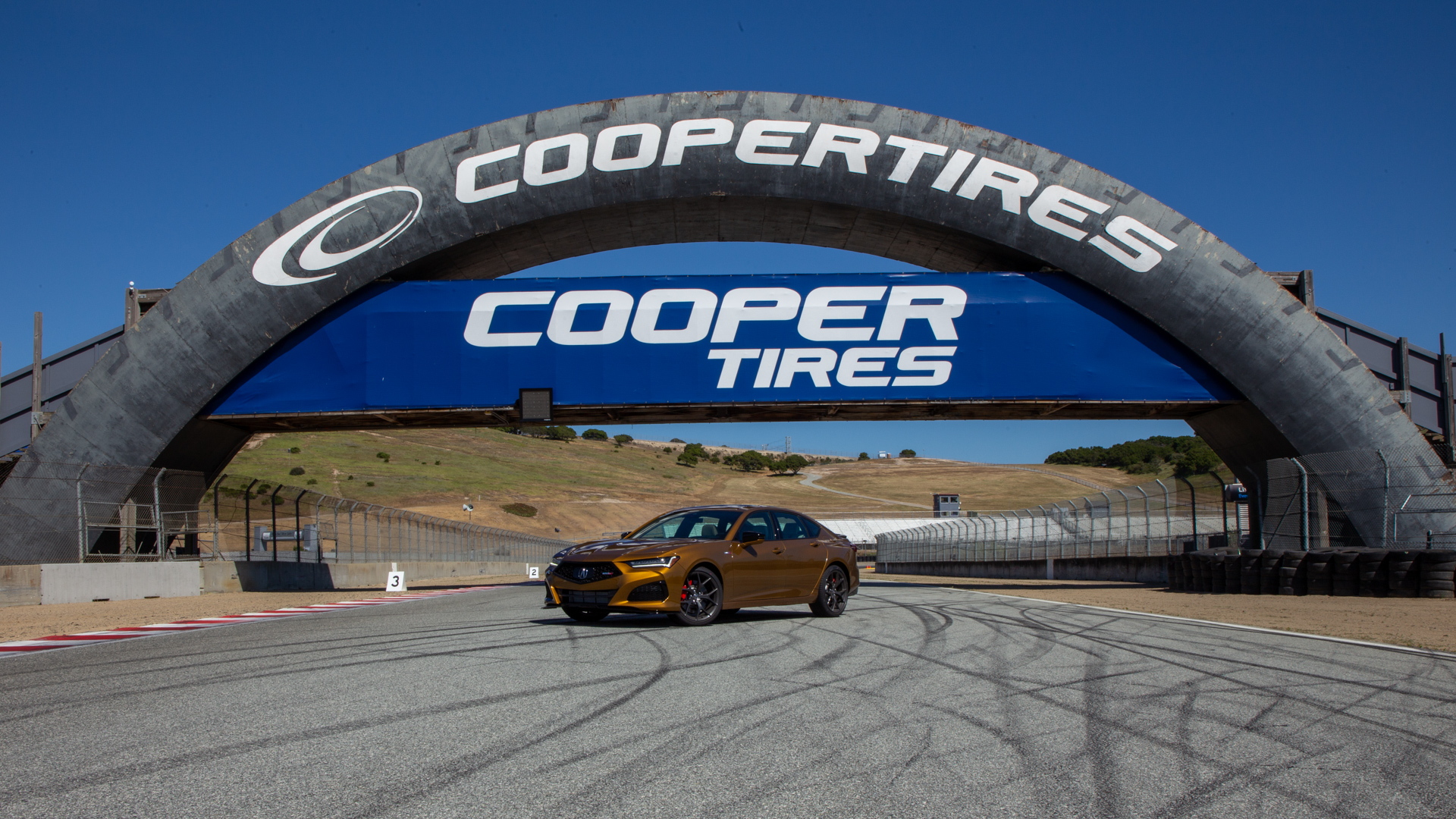 The 2021 Acura TLX has inspired mixed reactions from our staff so far. It earned a Motor Authority Best Car to Buy nomination on the strength of its chassis improvements, styling, and strong turbo-4. On the other hand, it prompted another editor to call it a “missed chance for greatness” thanks to a complicated multimedia system and a lack of balance.

We all agree on one thing though: the Type S is the TLX that we’ve really been waiting to drive. It certainly looks the part of a luxury sport sedan, with that fetching profile augmented by Type S-specific quad exhaust outlets, a front splitter and rear diffuser, a new diamond pentagon grille with more outlets for additional cooling, and blacked out headlights. It turns up the aggression on the TLX’s styling in a tasteful way, building on what was a good looking sedan to make it a great looking one. It also gets exclusive paint and interior colors, Tiger Eye Pearl and Orchid, that feature light gray fabric and black suede inserts on the seats.

I traveled to the West Coast Mecca of auto racing, Laguna Seca, to spend a day driving around the picturesque streets of Carmel-by-the-Sea and traversing the raceway’s famous hills before the TLX Type S hits the market in late May. The Type S proved to be very proficient in one of those environments, but out of place in the other.

The 3.0-liter turbocharged V-6 produces 355 hp and 354 lb-ft of torque, gains of 83 hp and 74 lb-ft, respectively, over the turbo-4 models. That power is routed through a 10-speed automatic transmission that gets mechanical upgrades and revised tuning to a standard all-wheel-drive system, a first for a Type S from Acura. The transmission upgrades are noticeable, especially in the new Sport+ drive mode. Downshifts happen 40% faster than in other TLX models while using the paddle shifters and upshifts in Sport+ are 30% faster thanks to a brief fuel cut during gear changes.

Like the Advance model, the Type S gets adaptive dampers, but the system feels completely different thanks to revised tuning and 40% stiffer front springs. Comfort mode in the Type S feels like Normal in the Advance, Normal feels like Sport, and the Sport suspension setting dials up the stiffness even more. It’s a change that I felt the Advance needed as that car feels too soft. The front and rear stabilizer bars are thicker as well, and extra reinforcements to the chassis and body structure increase torsional rigidity by 13%. Whereas the A-Spec was nothing more than a glorified appearance package for the most part, the Type S is much more transformational.

On the street, these changes universally improve the car’s drivability. The added power makes the whole car feel more lively and the throatier (though perhaps not louder) exhaust note from the V-6 and active exhaust system is a welcome addition. With the smaller engine, it feels like you have to really coax power out of the engine at times and be bang on with manual gear shifts to get the car to push hard out of corners. This powertrain is more responsive at both low and mid rpm, and more adept at finding the right gear more quickly, and that simplifies the process. If you still choose to use the paddles, the quicker downshifts provide an added connection to the Type S.

The Sport setting for the suspension is too stiff for day-to-day use, but an excellent option on curvy roads. A customizable drive setting that lets you turn the powertrain dial up and keep the suspension in a more comfortable setting enables access to the sweet spot. In both Comfort and Normal, the suspension is pliable enough for the Type S to cruise highways in tranquility.

An available $800 wheel and tire upgrade improves the Type S’ canyon carving abilities. The standard setup is a 20-inch alloy wheel with an all-season tire (bleh), but the lightweight 20-inch alloy wheels wrapped in Pirelli P Zero summer tires offer more grip and save 21.3 pounds of unsprung weight. It’s the Type S’ only real option and a box I’d be sure to check; the all-season tires on other TLX models seemed to hold the car back from reaching its handling potential. The added grip from those tires lets the chassis and steering really shine.

The TLX Type S really shined on public roads as an overqualified daily driver that’s fun to pilot when the road turns to spaghetti. My question then was, how would it do on a track?

Laguna Seca is one of my favorite tracks, but it’s also a sadistic stretch of pavement. Nearly all of the elements that can make a track difficult conspire here: big elevation changes, several blind crests, high-speed off-camber turns, tight braking zones after long straights, and of course, the Corkscrew. It’s great fun, but also a place designed to make even the best cars (and drivers) feel uncomfortable. And it exposed the Type S in a few ways.

The Type S was most comfortable in the lower speed, tighter corners where the AWD system could shine. It sends up to 70% of power to the rear wheels and all of that can be shifted to the outside rear wheel. In Sport+, that side-to-side bias is increased and keeps the nose from pushing. It feels like the car is going to understeer, but a splash of corrective throttle gets things sorted out. The transmission also does an excellent job of holding the correct gear in these instances, though I would like Acura to tell me what gear I’m in all the time while in either Sport mode. That number only shows up when you start to use the paddles.

In high speed sweeping corners, the Type S feels much less settled. Laguna Seca has a pair of these corners, where you’re meant to hit the apex at speed and on throttle, letting the car’s grip carry you to the edge of the track to hold the speed approaching a large hill. Even with the added stiffness to the chassis and suspension, the car felt a touch off-balance in those moments where you really want to feel it tuck in and hunker down. I never felt like I could trust it and it cost me precious momentum at the same spot on the track each lap.

It felt like the Type S was a bit of a pretender on a true racetrack. The double-wishbone front suspension and well-tuned steering held up nicely, but the rest of the car fell a little flat. I’m not sure that there is an easy fix for the TLX Type S as its shortcomings in this environment seem to be more a function of its front-drive architecture and overall heft. The car is rather heavy, tipping the scales at 4,221 pounds (or 4,200 pounds with the lightweight wheel/summer tires equipped). Competitors like the Audi S4 and Mercedes-AMG C43 weigh just under 3,900 pounds each. You don’t really feel the car’s weight on the street, but on a track its heft and imbalance are magnified. Rather than feeling especially agile, it feels like you’re wrestling physics at each turn.

The 2021 Acura TLX Type S is a fun and sporty daily driver, and when you consider its price against the rest of the TLX lineup and competitors it begins to make a stronger case for itself. A starting price of $53,325 puts it at about $5,000 more than an Advance model with AWD ($48,300) and for the performance and styling gains it’s definitely worth the jump.

A strong feature set also gives the Type S a pretty big leg up on the S4, C43, and the BMW M340i. The German trio all end up in the mid-$60,000 range when equipped to match the Acura’s strong safety and convenience feature offerings. Heated and cooled seats, ELS premium audio, many advanced safety features, and wireless charging all come standard on the Type S, unlike the other sedans.

However, each of those cars offer significantly quicker acceleration. Acura quotes a 0-60 mph time of “around 5 seconds.” The S4 makes the sprint in 4.4 seconds, the C43 in 4.5 seconds, and the M340i in a blistering 4.1 seconds. For sport sedan buyers looking to maximize performance, numbers like these might be more of a bottom line than the price.

Acura provided lodging and a day behind the wheel on the road and track for Motor Authority to bring you this first-hand report.