Ford has filed a new trademark application for the Thunderbird name with the United States Patent and Trademark Office, according to documents spotted by Muscle Cars & Trucks. But that doesn't mean a new Ford Thunderbird is on the way.

The application was filed on January 13, and specifies that Ford is applying to use the trademark for "motor vehicles, namely concept motor vehicles; four-wheeled motor vehicles."

Automakers often trademark names even before they have a potential vehicle in mind for them; it's just a way of reserving those names for possible future use. Given the importance of the Thunderbird name to Ford, it's also possible that the Blue Oval is applying for a new trademark to prevent other companies from using it. Ford has renewed the trademark multiple times in recent years, most recently in 2016, Muscle Cars & Trucks noted. 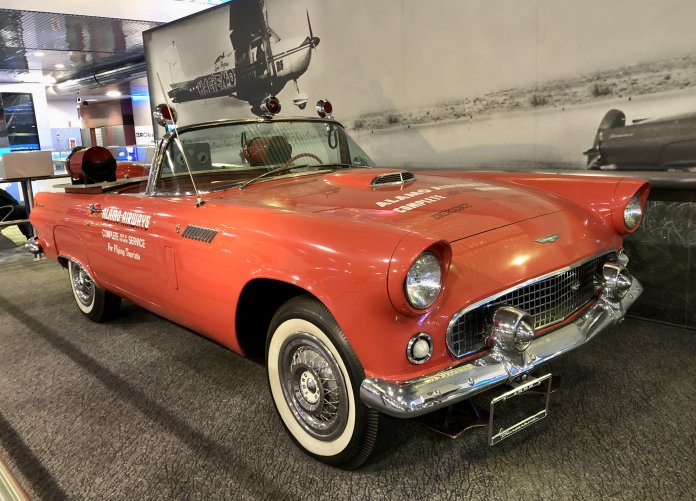 The mention of "concept motor vehicles" in the application could also indicate plans for a concept car (assuming auto shows ever return), but not a full-fledge production model.

The Thunderbird took on many forms during its decades of production. Starting out in 1955 as a two-seat sports car, it grew into a cushier "personal luxury car," then morphed into a NASCAR homologation special with aerodynamic bodywork. After a brief hiatus, the Thunderbird returned for the 2002 model year with retro styling. Despite initial hype, that version didn't last long. It was retired after the 2005 model year, and the Thunderbird name has remained dormant ever since.

Unlike many other iconic nameplates, the Thunderbird has always changed to suit the times. With the electric Mustang Mach-E, Ford has also shown that's not afraid to reuse classic names in ways hardcore fans might find sacrilegious. So perhaps the Thunderbird will return in yet another new form.