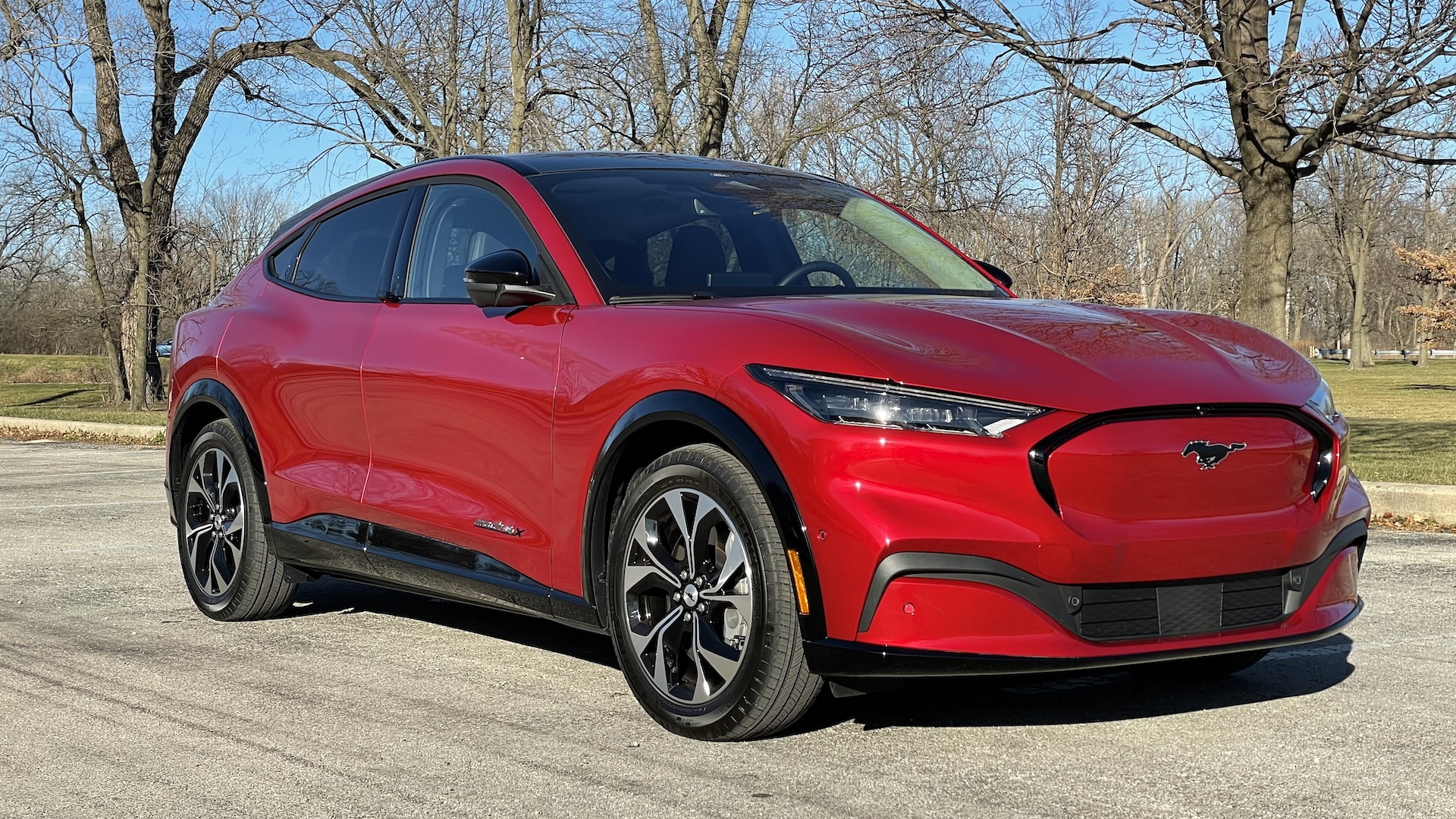 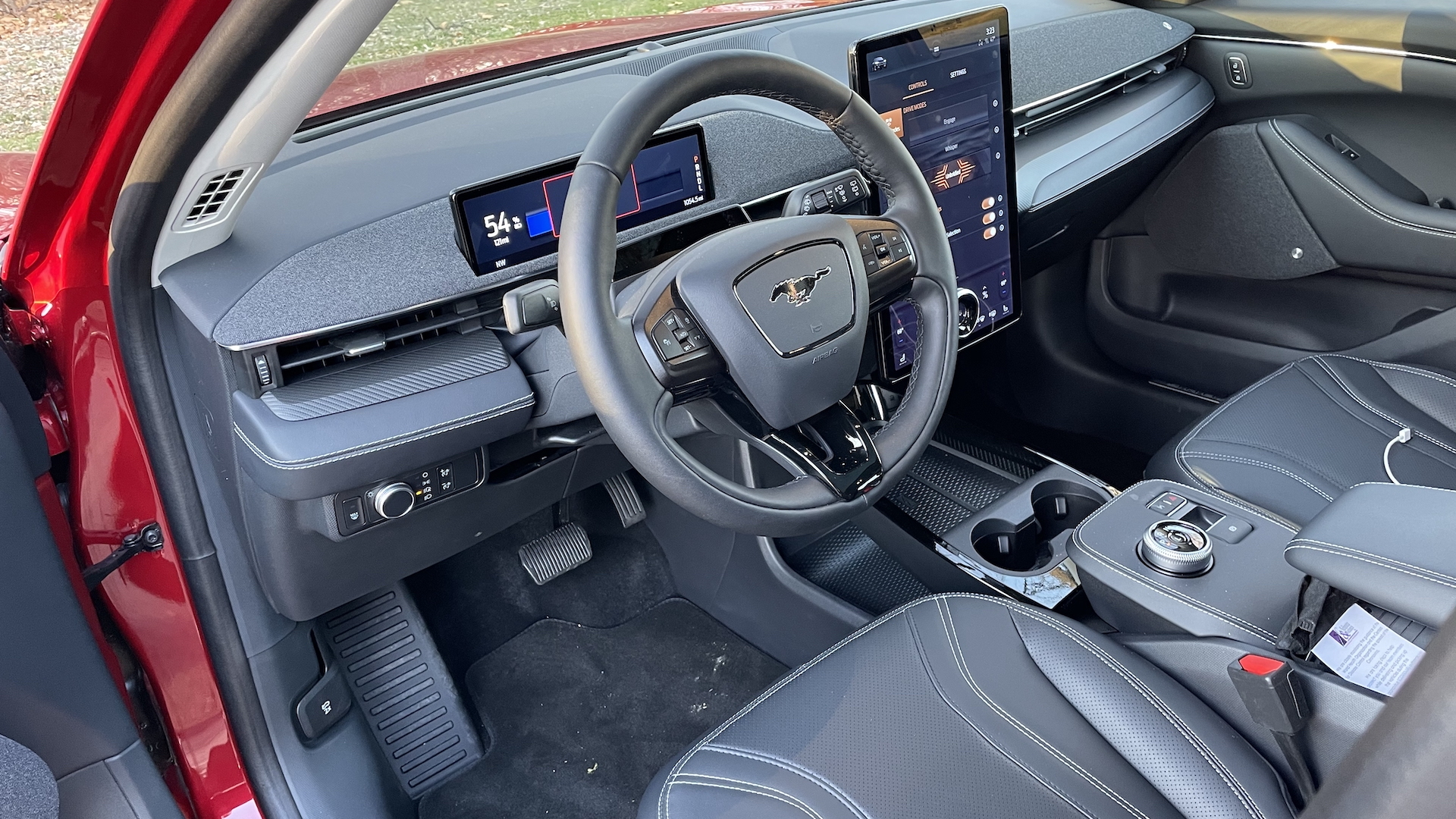 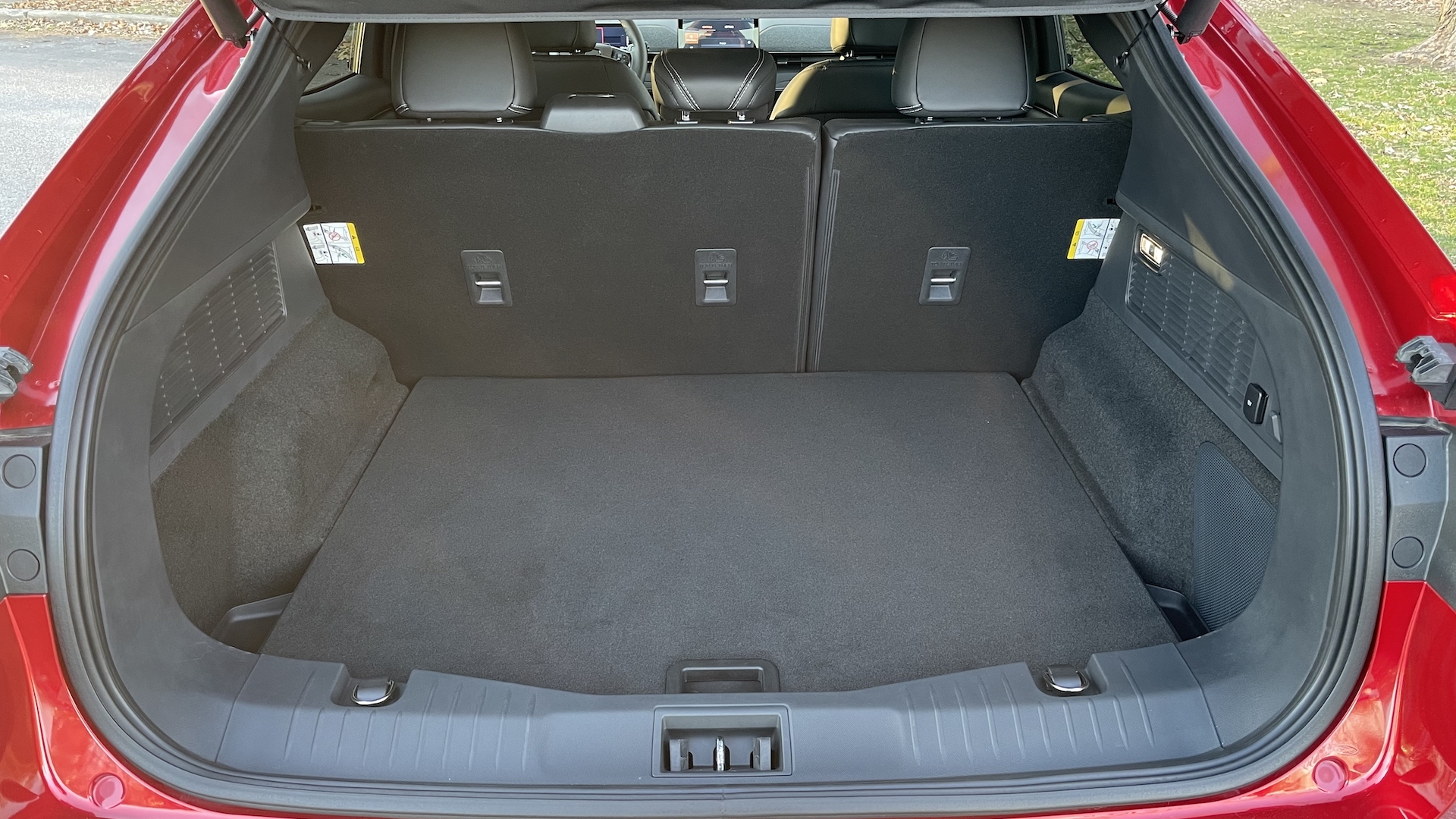 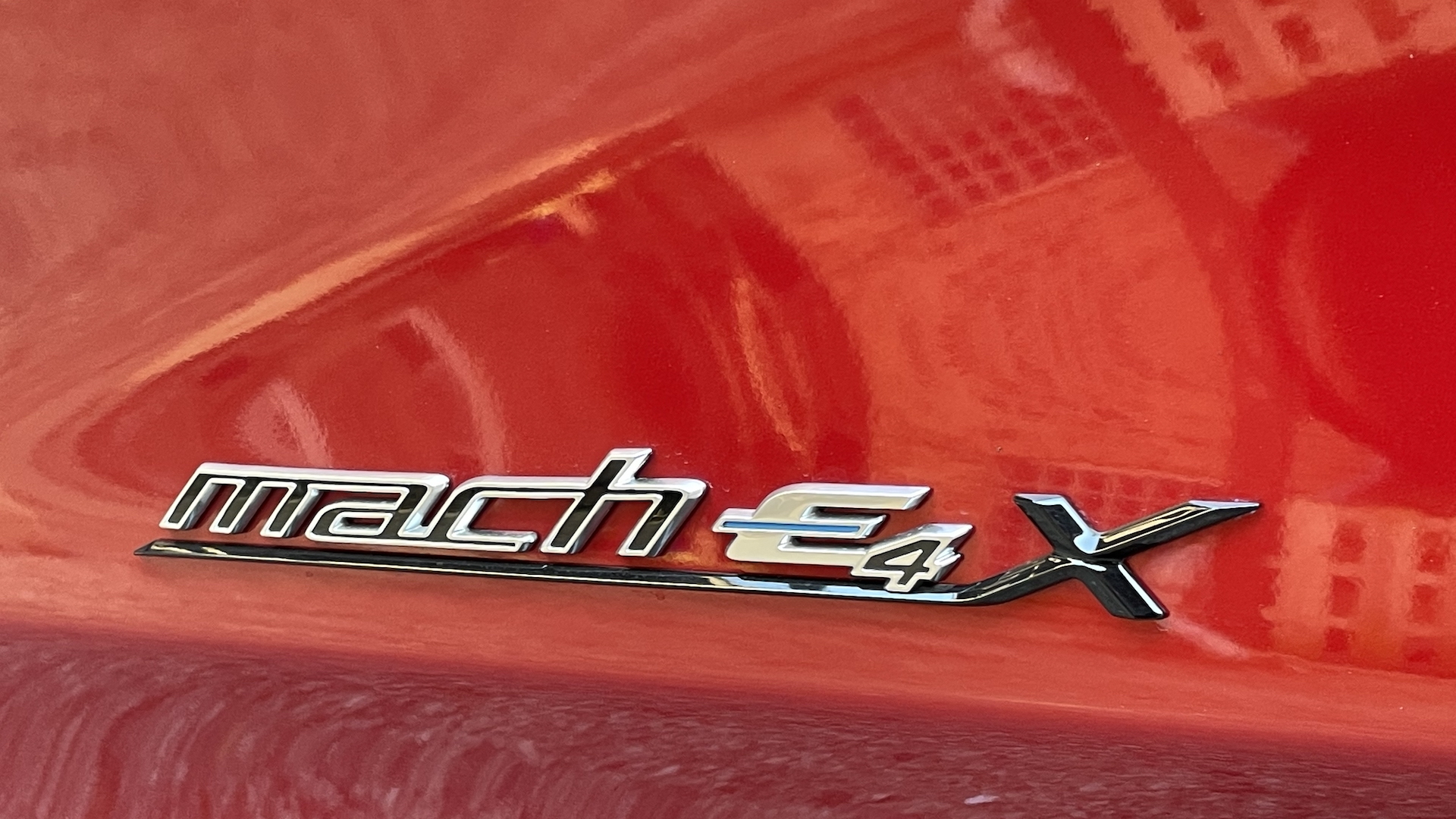 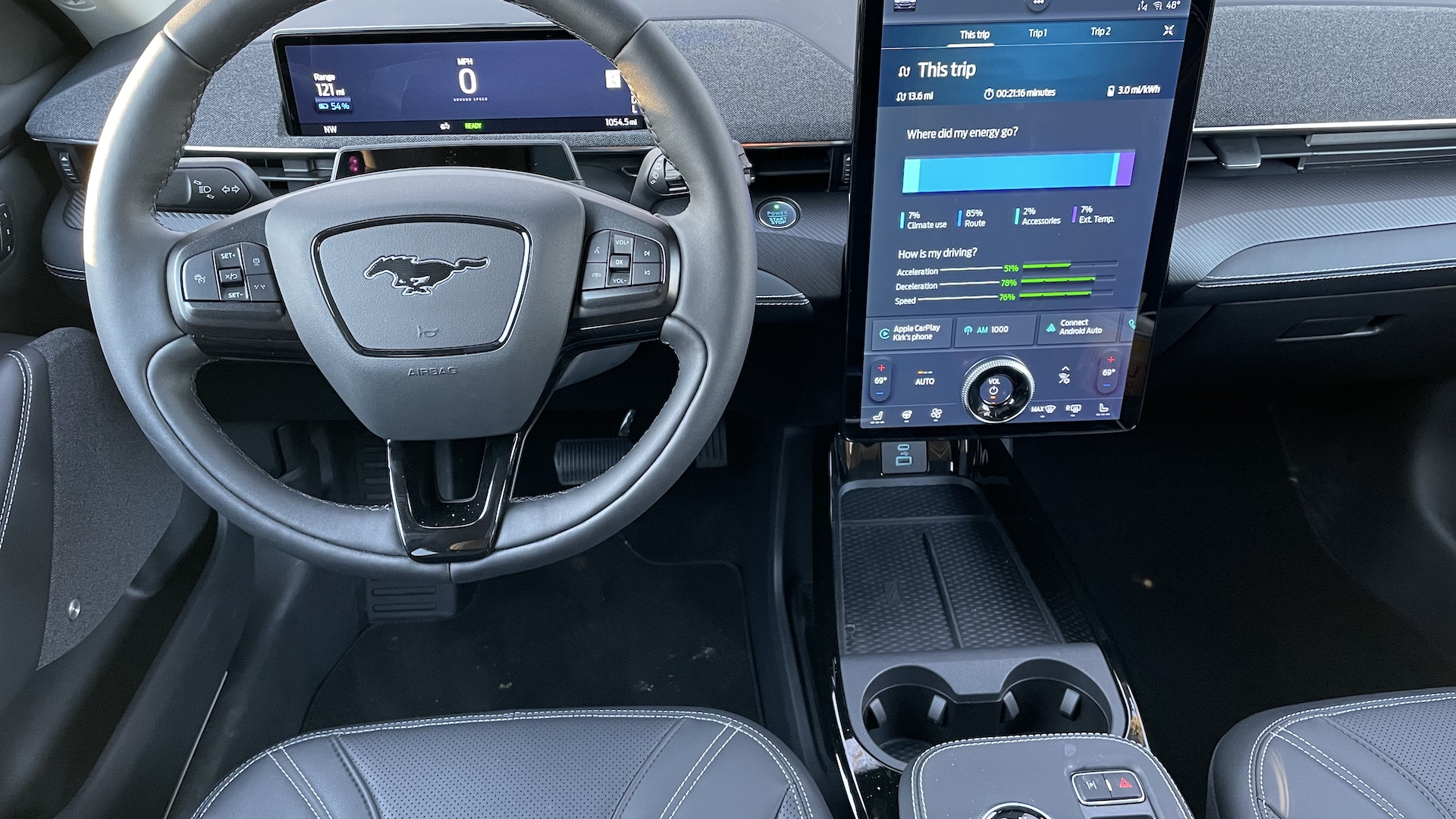 Approaching the Rapid Red 2021 Ford Mustang Mach-E, I can see the Mustang influences, but I’m dubious. The haunches over the wheels say Mustang, the galloping horse logos on the nose and steering wheel say Mustang, the sequential taillights say Mustang, and the sill plates on the doors literally spell out “Mustang.” Once inside, the view over the twin-peaked hood says Mustang, too. Not much more of it feels like a Mustang, though.

“It’s designed to bring more emotion into an electric car that really is kind of lacking in that space at the moment,” Darren Palmer, global head of product development for battery electric vehicles, told me. “And that is why we decided to tie it with Mustang.”

None of the chassis components of this electric crossover SUV are shared with the current Mustang or the Mustang to come. Instead, the Mach-E rides on a new platform developed for electric vehicles with an especially long 117-inch wheelbase that makes room for a large battery pack between the front and rear wheels. The vehicle sits 5.7 inches off the ground, which is fairly low for a crossover, but placing the seat atop the 5.9-inch thick battery in the floor creates a more traditional SUV seating position.

The powertrain consists of one or two motors depending on the model. In any model, a large permanent magnet motor is located on the rear axle. In my Premium 4X model, it makes 290 horsepower and 317 pound-feet of torque. This tester has the $2,700 all-wheel-drive option with a second, front-mounted motor that spins up an additional 56 hp and 111 lb-ft of torque to bring the totals to 346 hp and 428 lb-ft. Instead of the 68-kwh base battery, my tester also has the 88-kwh extended-range battery for an extra $5,000.

The Mach-E leaps away from a stop with nothing but a faint whisper of electric whine in the appropriately named Whisper mode. The available Engage mode—the equivalent to a Normal mode—adds more motor whine, and the Sport-style Unbridled mode adds a faint suggestion of a far-off V-8 engine, but only after I enable powertrain sounds through the center touchscreen. Ford says it derived the sounds from the motors, but they differ so much from each other that they have to be more digital than simply “enhanced.

Other than immediacy, there’s no Mustang in the way the power arrives. The 428 lb-ft of instant torque gets the Mach-E moving quickly and pushes it from 0-60 mph in a quick 4.8 seconds, according to Ford. Single-motor versions have just a rear motor and hit 60 mph in 6.1 seconds.

The power isn’t so robust on the highway. It has only decent passing punch when cruising along at 70 mph, and not as much as you’d get with a 350-hp gasoline engine. Torque is the dominant force here. Horsepower is secondary. A typical Mustang offers both.

Around town, the Mach-E can coast like a normal gas car or I can activate one-pedal driving through the touchscreen. The latter slows the vehicle whenever I’m not on the throttle and can bring it to a complete stop. It’s the way to go for best range, and I don’t detect the transition between the regenerative braking system and the mechanical brakes. When I’m not in one-pedal mode, the brakes feel natural instead of grabby as is often the case with EVs.

As I hunt for clover leafs and twisty roads, the Mach-E departs further from the feel of a true Mustang; it drives more like an agile crossover. The steering feels dull though direct. It gets so artificial with the added weight of Unbridled mode that I dial it back to Engage for a more natural steering response.

The 225/55R19 Michelin Primacy all-season tires are nothing like you’d expect on a Mustang. They’re too skinny to create the sinister look of the coupe and convertible or to provide ultimate grip.

However, a couple spirited runs through clover leaf on-ramps show some unexpected playfulness. When I charge into a corner, the Mach-E suffers from some initial understeer. But its nose tucks in and the vehicle rotates when I expect it to push during higher speed cornering. That’s enabled by a stiff structure and some electric trickery that moves the power around with a rear-drive bias and rear-axle electronic torque vectoring. The body rolls like a crossover due to the tall ride height and 4,838-pound curb weight. It’d say it compares favorably to the sporty Mazda CX-5.

The development process created this behavior. The Mach-E’s Team Edison development team included members of the Mustang team, led by Dave Pericak, global director of Ford’s icon vehicles. According to Palmer, Pericak insisted on stiffer front and rear subframes to enable the handling targets for the forthcoming Mach-E GT model and to match the platform stiffness that is enhanced by the rigid battery structure. Those subframes were eventually used for all models. Ford also tuned the suspension on its NASCAR simulator in Charlotte, North Carolina.

But there’s room for more. For now, Ford doesn’t offer wider tires or summer-performance tires. Both are on tap for the upcoming GT and GT Performance Edition models, and they should give the Mach-E more of the handling and look of a proper Mustang. The GT models will also use a larger front motor to target 459 hp, 612 lb-ft of torque, and a 3.5-second 0-60 mph time.

The interior mimics Tesla far more than Mustang. A 15.5-inch vertically mounted touchscreen dominates the dash like you find in every Tesla, and it runs the new Sync 4A infotainment system. It’s a quick-acting, easy-to-navigate system that learns owners habits and anticipates them with suggestions for a destination or phone call based on the day and time as examples. The system can also improve over time thanks to over-the-air updates.

The instrument cluster isn’t a hooded pod like most cars, but a short, wide screen that rises from behind the steering wheel. It shows only basic information like range, battery percentage, gear, and mph, plus navigation directions when a destination is set. In a nod to the Mustang, the speedometer readout is in “ground speed.”

The dedicated EV platform gives the Mach-E good room for passengers and, to a lesser extent, cargo. Its long wheelbase creates copious rear-seat leg room, even for tall passengers, and head room is good, too, despite the coupe-like roofline. The roofline does sap some of the cargo space, though, but the Mach-E still has 29.7 cubic feet of cargo room behind the rear seat and 59.7 cubes with the rear seat folded flat, figures that are comparable to most compact crossovers. Additionally, the frunk has 4.8 cubic feet of space, and it comes with a drain plug so it can be filled with ice and used as a cooler.

My Mach-E arrived with a 91% charge and 186 miles of range shown in the instrument cluster. The charge percentage was a true measurement, but the 186 miles was just an estimate and it appears a low one. Ford bases remaining range on how the Mach-E has been driven. Given that the long-range, AWD Mach-E is rated at 270 miles of range by the EPA (rear drive is needed for the 300-mile range target Ford wanted to hit), it appears the Mach-E wasn’t treated with kid gloves over its first 965 miles.

On a 49-degree afternoon, I drive 91 miles and use 64 miles of range and 38% of the battery charge. After the run, the touchscreen’s “Where did my energy go?” readout shows that only 4% of the energy use went to the climate control system.

During a second trip in 37-degree weather at night, I drive 41 miles and use 56 miles of range while charge drops 20%. This time, 11% of the power went to climate control, which I set at 68 degrees. The vehicle was was colder when I began, so the system likely used up some charge to condition its battery. Palmer tells me the way to get the best charge is to keep the battery warm on a charger and precondition the interior based on a set departure time.

In total, I drive 132 miles, eat up 120 miles of range, and use 58% of the total charge. That pens out to a little less than the stated 270 miles of range but I wasn’t driving during ideal weather and didn't precondition the car. During my two drives, the Mach-E consumes between 2.4 and 3.0 miles per kwh, both shy of Ford’s quoted 3.4 rating.

My Premium test vehicle has a starting price of $47,100. The big battery and all-wheel drive add $7,700 to the price and some options bring the total to $56,200. Most buyers will be able to take advantage of the federal $7,500 EV tax credit to reduce that price. As a Premium model, it comes with such features as a panoramic roof, a 10-speaker B&O audio system, a hands-free liftgate, heated front seats and a heated steering wheel, and 19-inch alloy wheels. That’s a decent price for an electric crossover with 346 hp and 270 miles of range.

Palmer says the Mach-E wouldn’t have received the love that it has in every aspect, especially performance and handling, without the influence of the Mustang team. Together, they didn’t create a vehicle that feels much like a Mustang, but they did develop a fun electric crossover that makes Ford an important player in the growing EV market.

Ford provided a day in the 2021 Mustang Mach-E for Internet Brands Automotive to bring you this firsthand report.