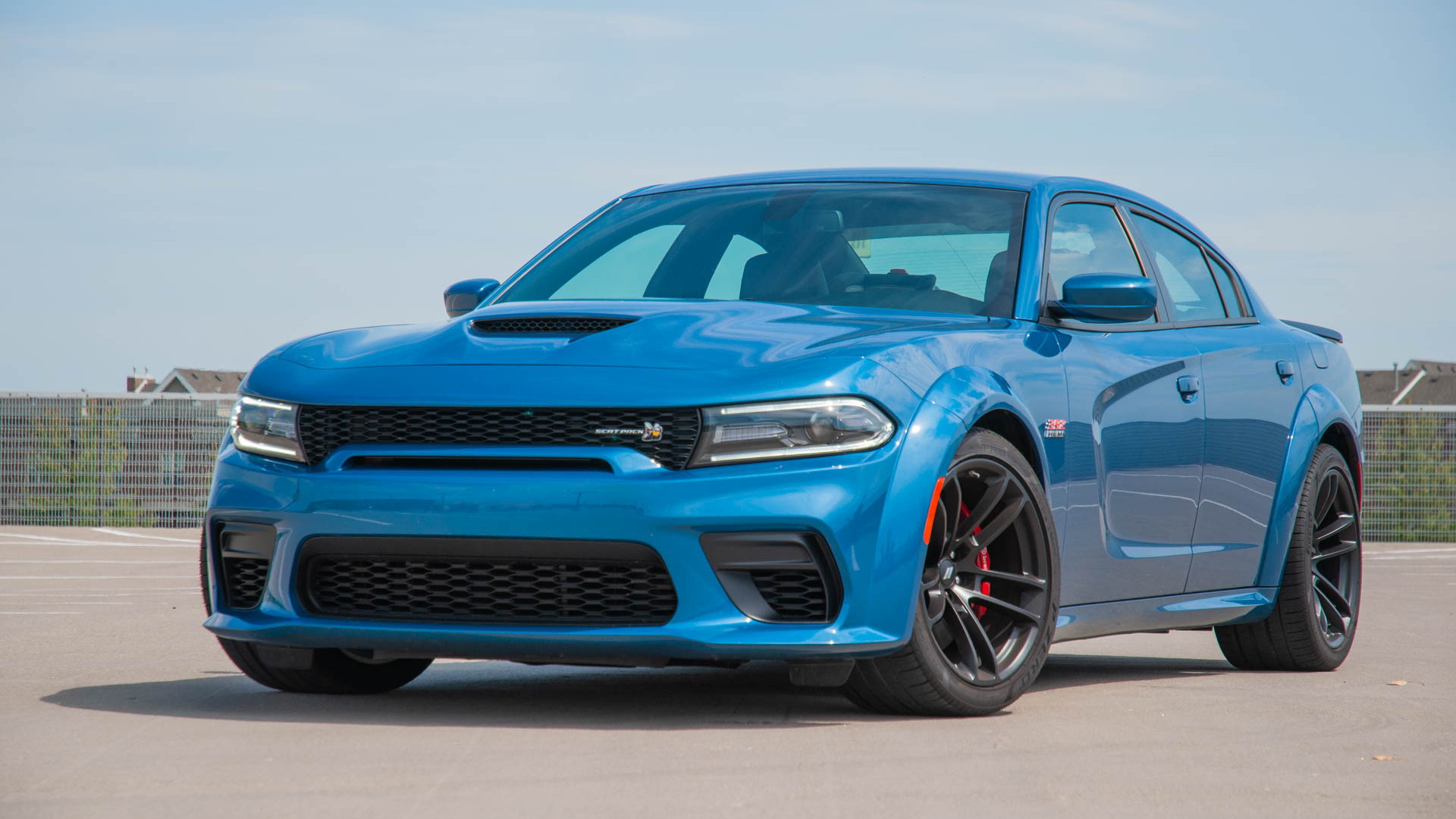 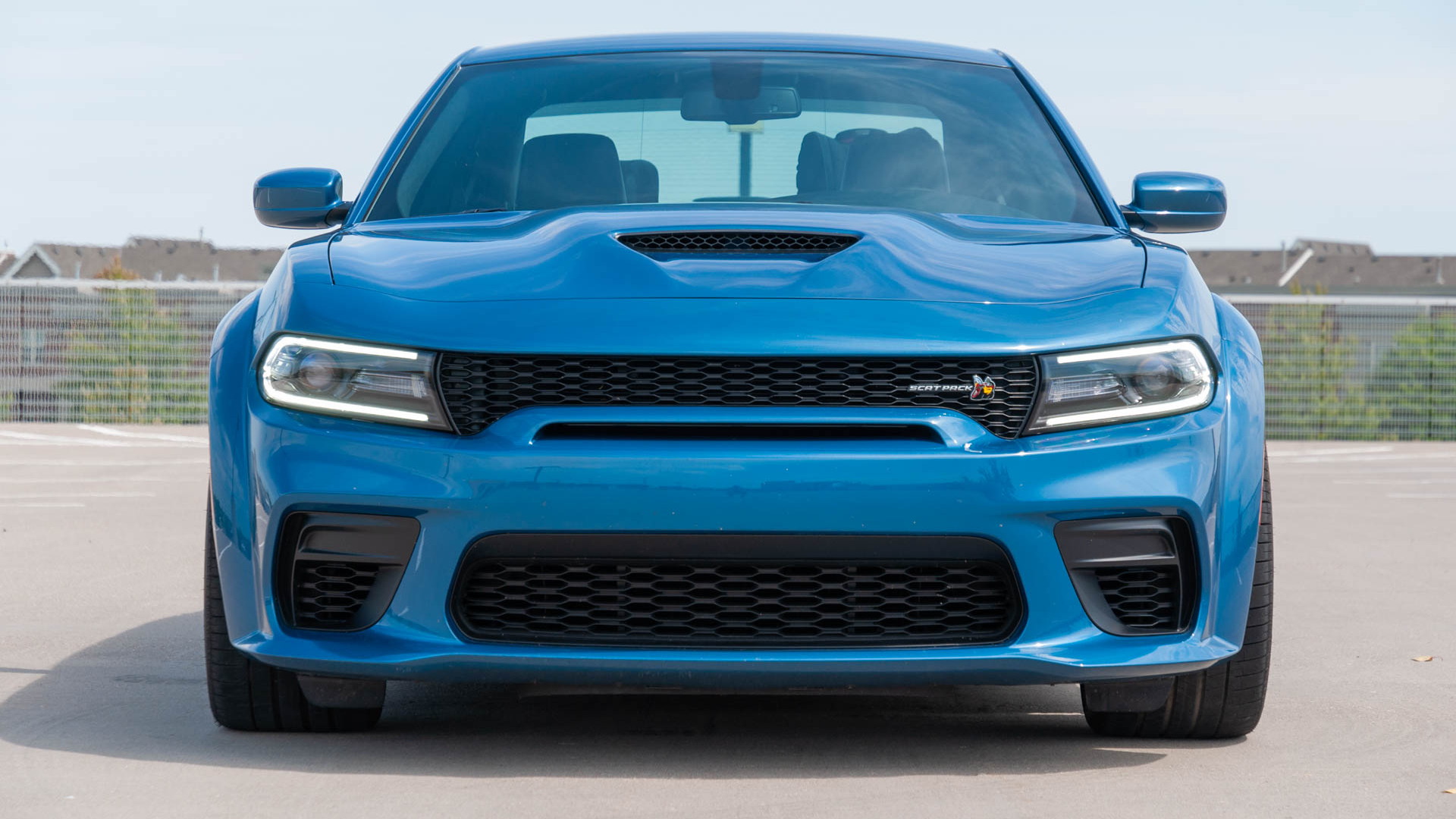 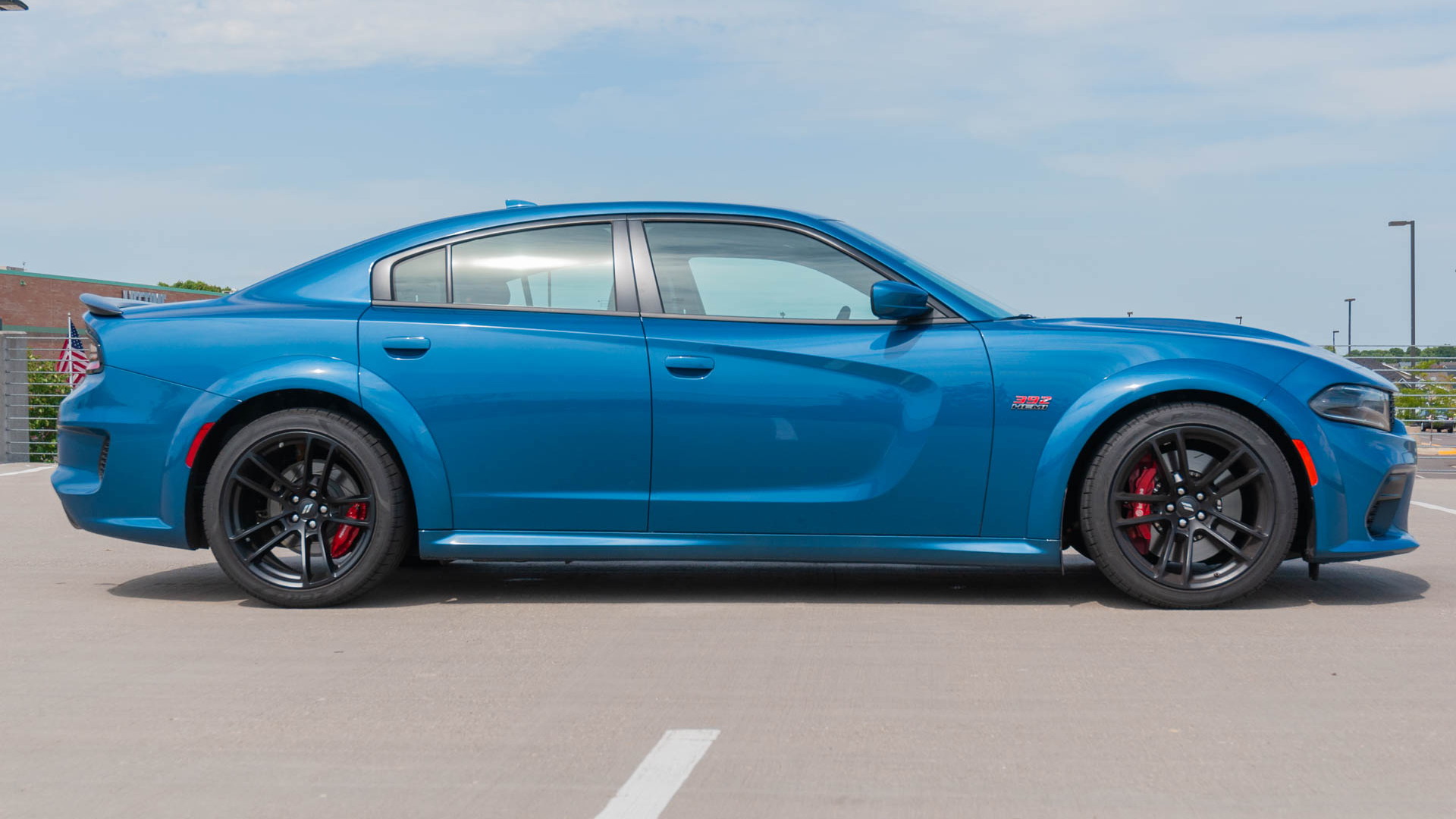 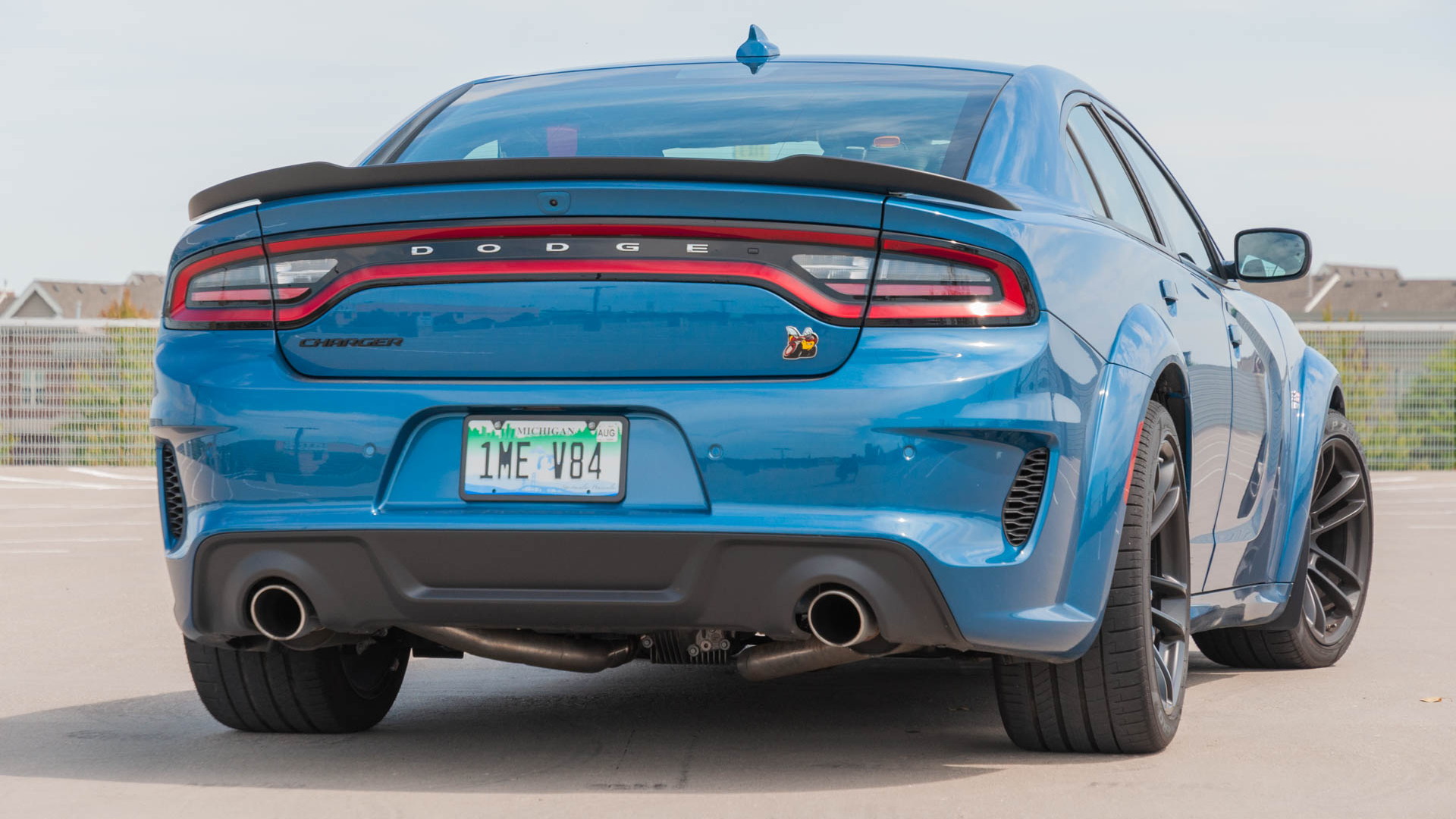 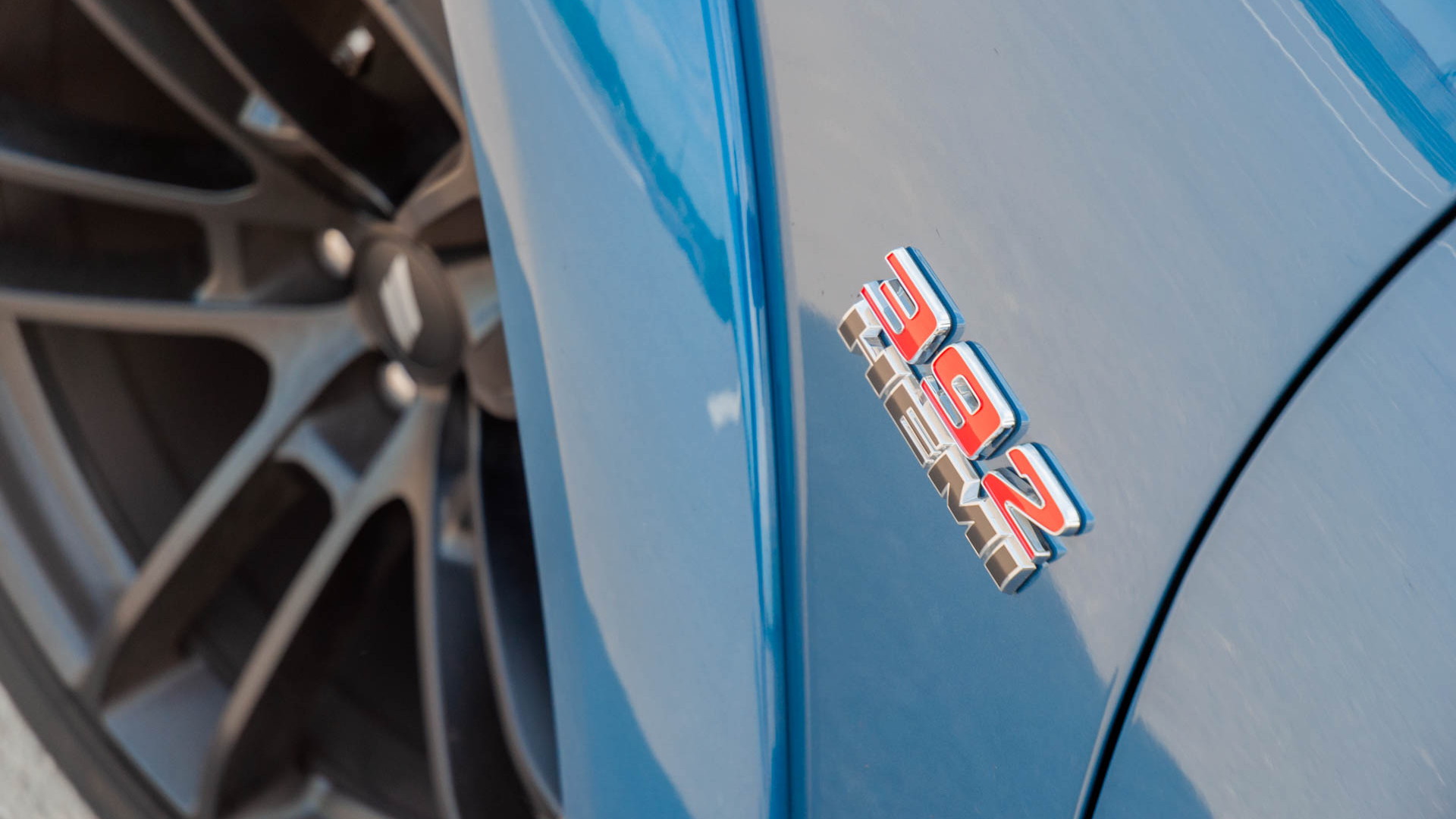 Hellcat all the things. Those four words have become a slogan for enthusiasts and served as Dodge’s standard operating procedure in recent years.

Hellcats are certainly the most powerful but not the best Dodges on sale today.

Hear me out. I love Hellcats and their 700-plus horsepower as much as the next guy, but all that power is simply too much. It’s the definition of excess. Power is great, but only if it makes it to the ground.

In the 2020 Dodge Charger lineup, the R/T Scat Pack Widebody is in fact the best choice.

I spent a week with a Frostbite Blue model and came to terms with what the 2020 Dodge Charger R/T Scat Pack Widebody is and isn’t.

Hit: It has usable power

Yes, 707 and 797 horsepower are fantastic, but that power is irrelevant if you can’t control it. Even in Widebody form with 305-mm Pirelli P Zero sat each corner the Hellcats want to spin their tires. “Spinning isn’t winning,” Tim Kuniskis, global head of Dodge and SRT, told Motor Authority at the reveal of the 2020 Dodge Challenger Super Stock. Tim’s right. With a 6.4-liter V-8 producing 485 horsepower and 475 pound-feet of torque, the Charger R/T Scat Pack Widebody has more than enough power for everyday, or even track, use, and it’s easier to control. The 305s have a better chance of sticking to the pavement and putting the power down than the narrow body’s 275s. The reality is your foot likely can’t control the Hellcat’s wheelspin to achieve its 3.6-second 0-60 mph time and if it can your internal Vbox likely can’t feel the difference from the Scat’s Pack’s 4.3-second 0-60 mph run.

The Widebody’s additional 3.5 inches of width makes a difference when driving the Charger day in and day out. The added width comes from wheel flares. On narrow city or suburban streets, the wider body requires extra attention to stay in your lane. That goes double for when pulling in or out of a garage. Parking next to a curb? Don’t forget the wheels stick out farther than you think (no wheels were curbed to bring you this report). Having to have to pay so much attention to how far the fender flares and wheels stick out can be tedious, especially because you can’t see the front wheel flares from inside the car. Forget about them, though, and you’ll hear a crunch.

Hit and Miss: You’ll hear it before you see it

“Your car’s here. I can hear it,” my wife, Karen, said. With the same 2.75-inch straight-through active exhaust system and 4-inch outlets as the Charger Hellcat, the Charger R/T Scatpack Widebody is just as loud as Dodge’s kittens from the underworld. On cold-start it can vibrate a garage and be heard inside the house as its active exhaust valves remain open until the engine warms up. It’s hilarious, my kids loved it, and it can easily make a grown man giggle. Wives don’t always react so positively.

Buy a Charger Hellcat or R/T Scat Pack and you’ll never sneak out of your house early in the morning for a car meet or to make that early flight (remember flying?) because you’ll wake the entire house and possibly your neighbors.

In an era of overboosted electric power steering systems the Charger R/T Scat Pack Widebody is a breath of fresh, heavy air. The car’s Street, Sport, and Track steering inputs can be described as heavy, heavier, and heaviest. I preferred Street mode—even during my time on Sonoma Raceway in previous experiences—as dialing in more heft simply made it harder to turn the wheel while providing no extra feel. Street mode provides more resistance than is found in most sport sedans, with just enough heft to acknowledge this is a muscle car, not a Corolla. Tough guys and strong men, feel free to drive with the steering in Track mode every day.

On a smooth racetrack or California pavement, the wide P Zeros at each corner of the R/T Scat Pack Widebody are fantastic. But their is a price to be paid for their grip. I live in the real world where it rains and pavement crumbles. Here in Minnesota (or Detroit, or Chicago, or any other Midwest state), the wide tires can be a nightmare in the rain and problematic on pockmarked roads and the freeway. Buyers should be aware these tires seek out and follow highway seams, find more bumps and ruts, and hydroplane easily. At least they aren’t as bad as the sticky Michelin Pilot Sport Cup 2s on the Ford Mustang GT Performance Package Level 2.

The Charger RT Scat Pack Widebody weighs 214 pounds less than a Charger Hellcat and has slightly better weight distribution of 55/45 versus 56/44. It’s hard to argue why someone would spend the extra money for 312 hp and 214 pound-feet of torque. I’d rather have the Scat Pack and a Honda Accord Sport.

At $98.94 per horsepower, the 2020 Dodge Charger R/T Scat Pack isn’t the most powerful four-door muscle car you can buy, but it’s the one that should top your shopping list unless drag racing or bragging rights are the top priority. Long live the Hellcats, but let’s not Hellcat everything.