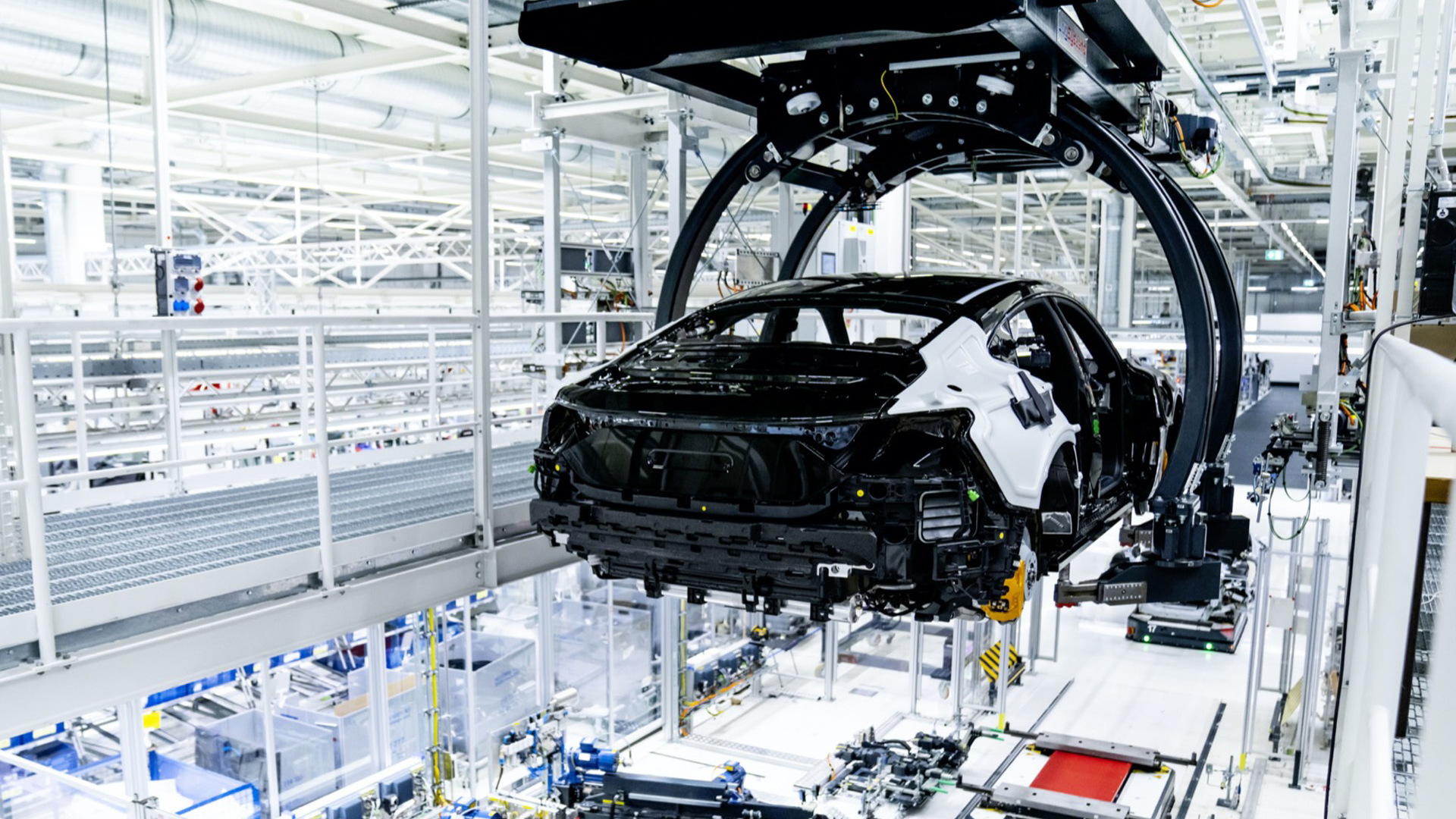 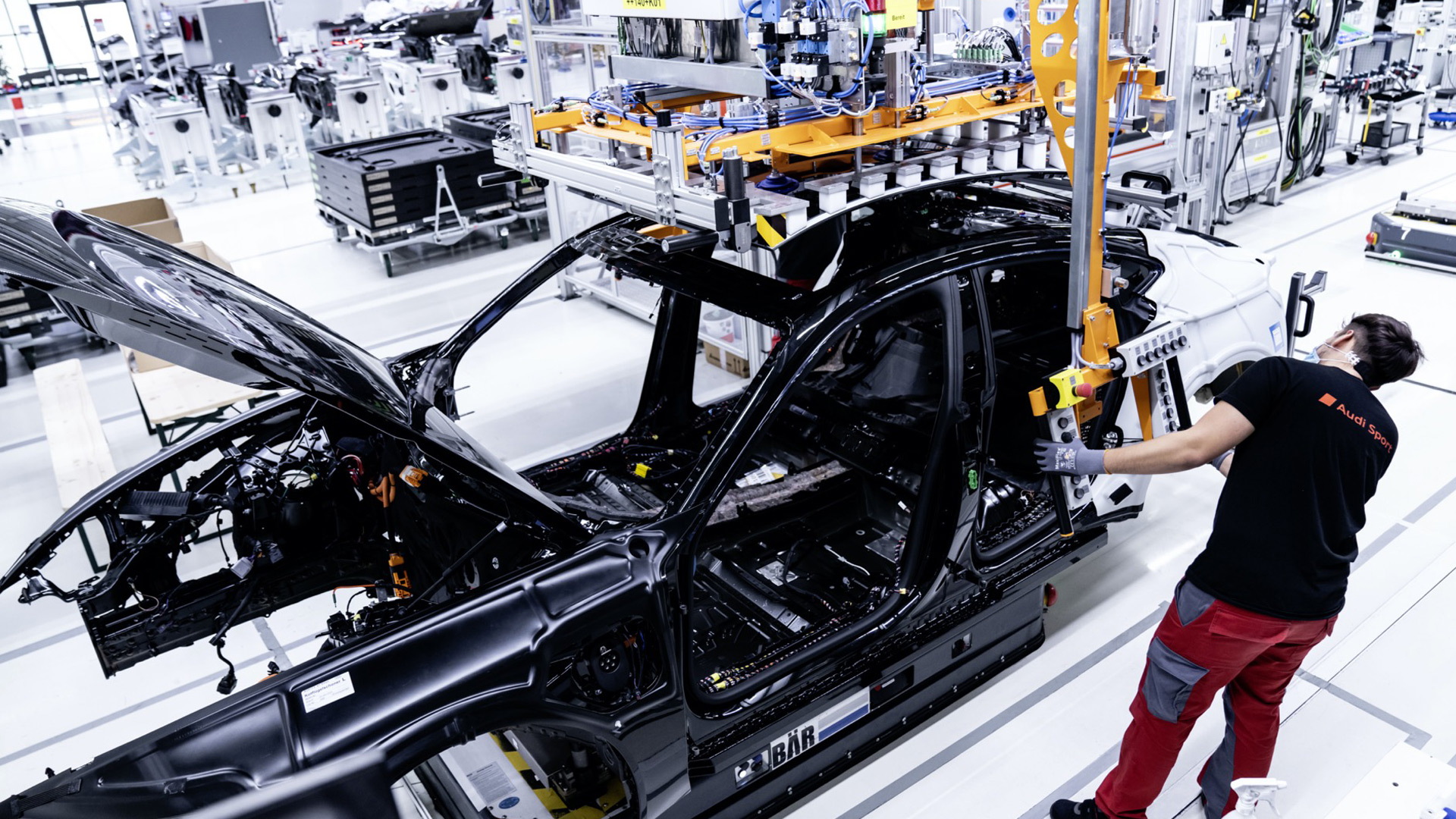 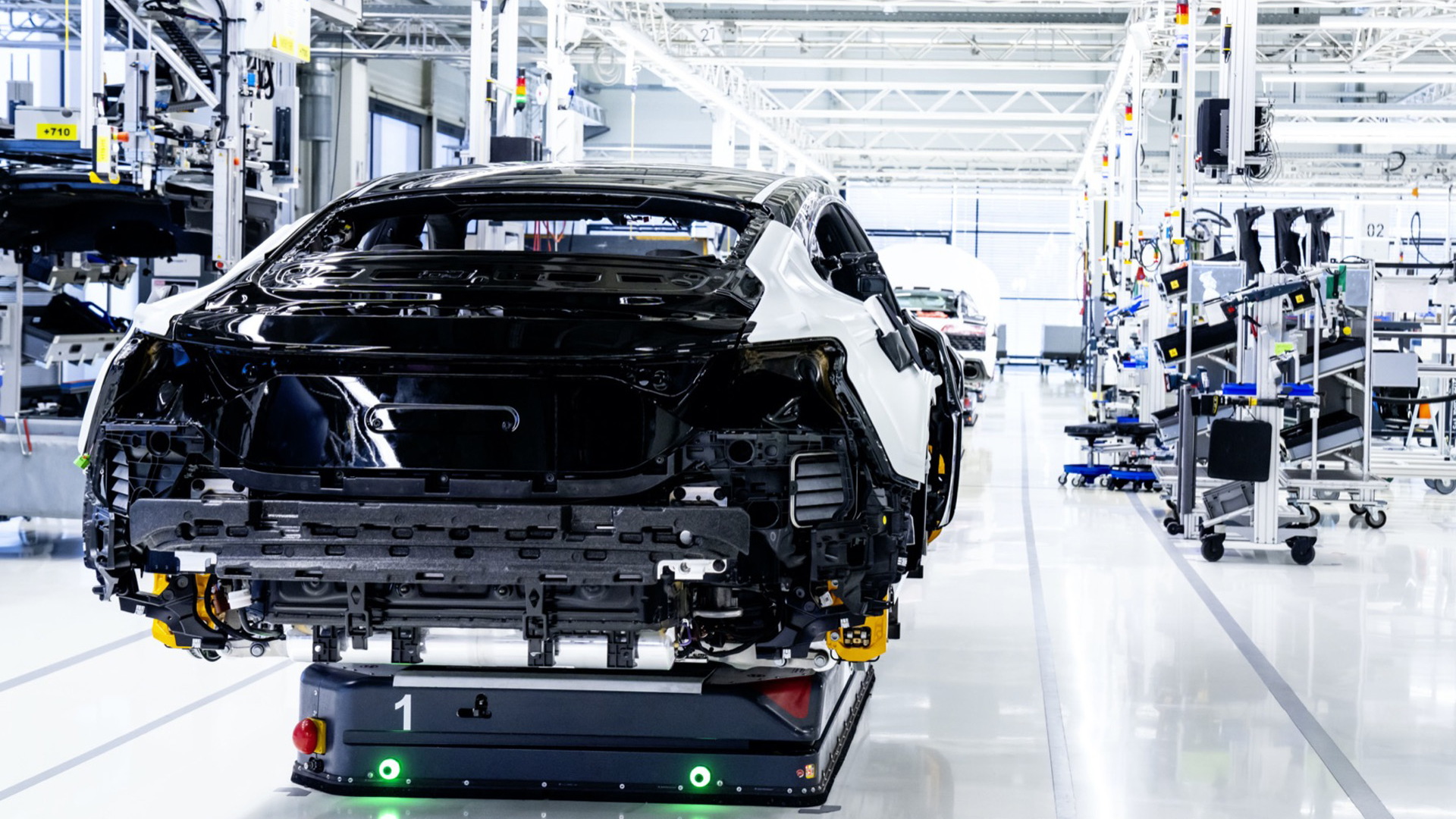 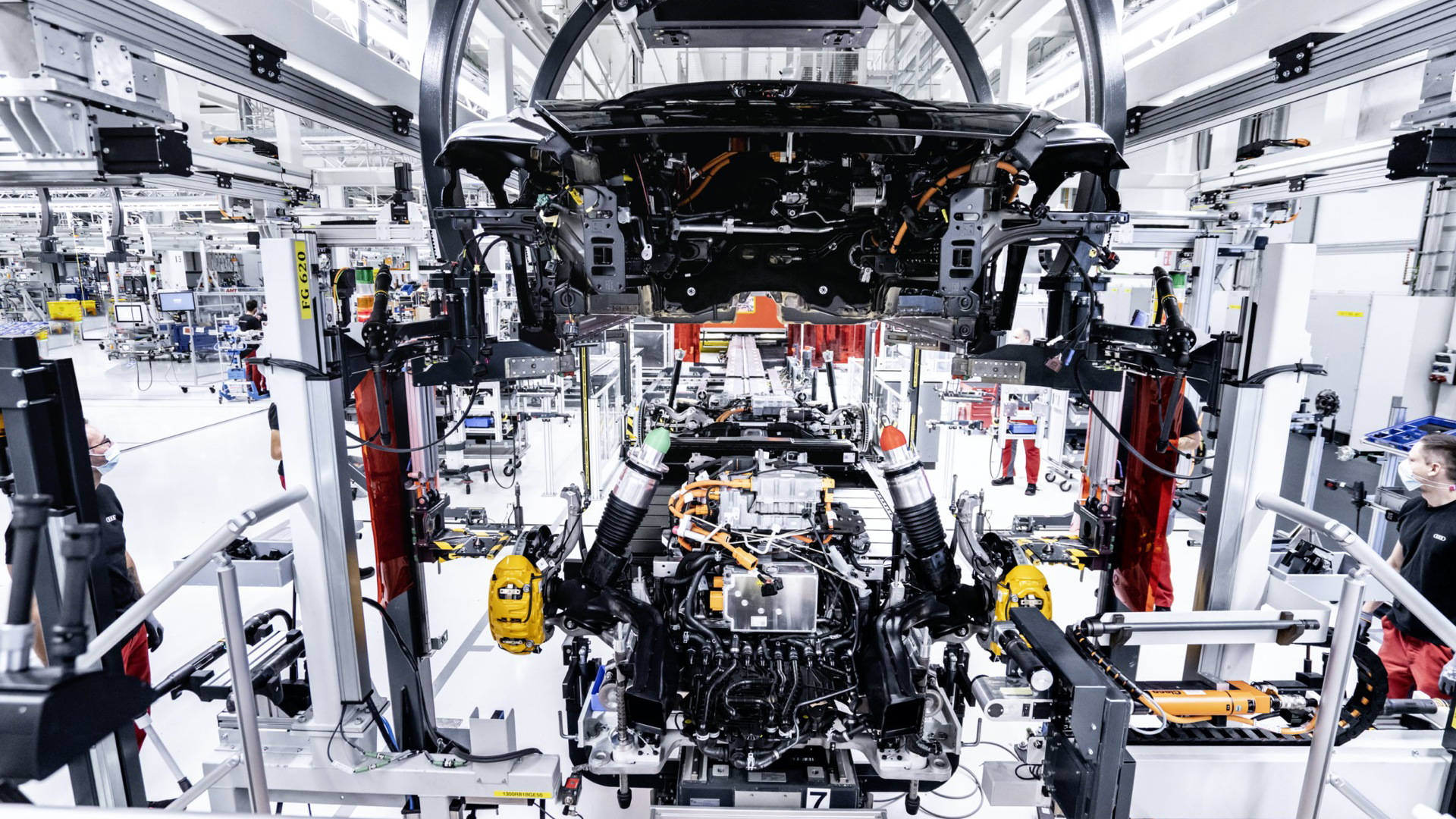 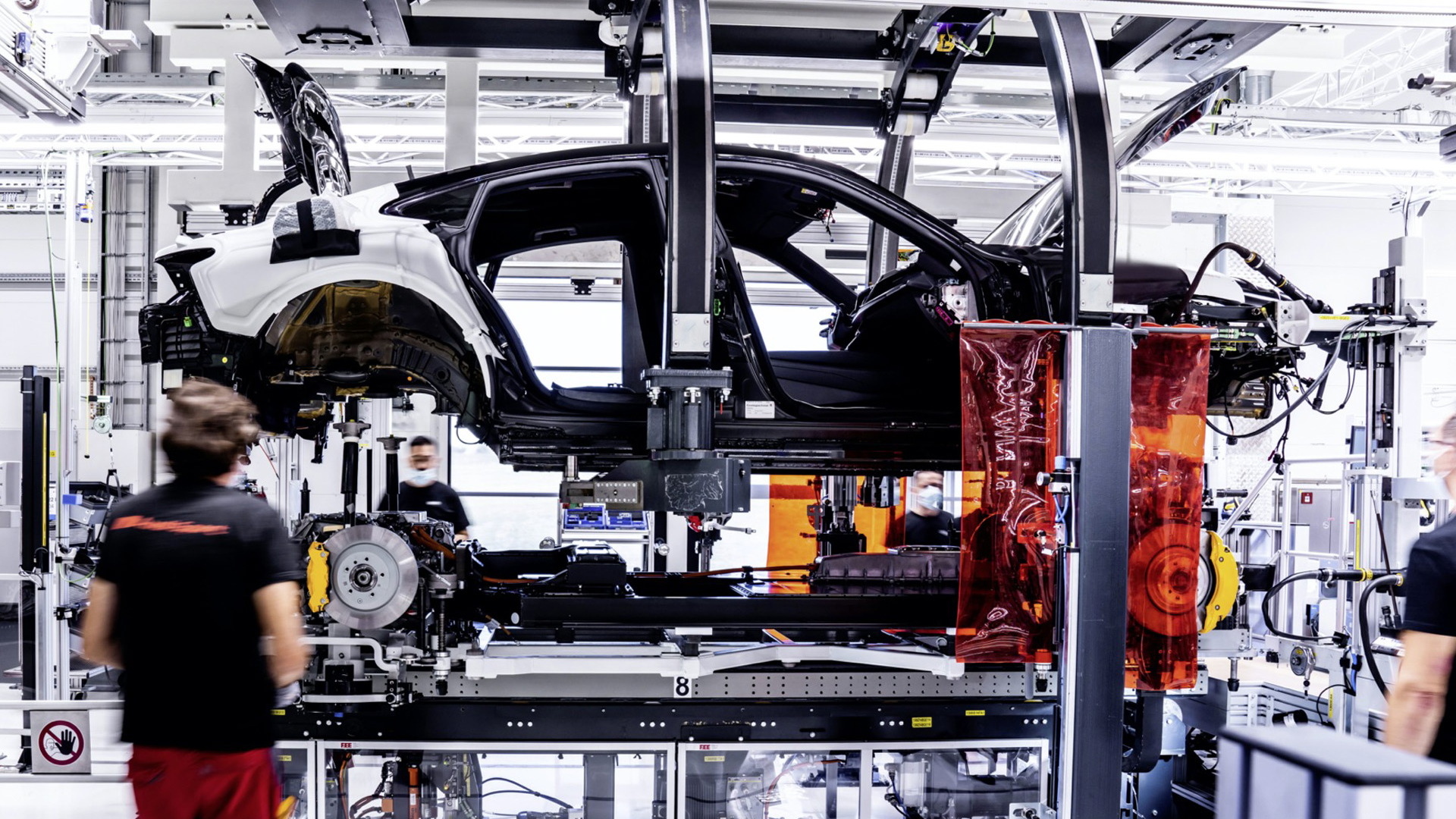 Audi's E-Tron GT is edging closer to production with workers at the automaker's specialist Böllinger Höfe plant in Neckarsulm, Germany, putting pre-production examples together. The first customer cars are scheduled to roll off the line at the end of the year.

The plant is where Audi builds the R8 supercar and various racing models. It needed to be expanded and upgraded to support the E-Tron GT, which is Audi's first EV built in Germany. The current E-Tron and E-Tron Sportback SUVs are built across the border in Belgium.

One of the key upgrades was a new body shop where Audi staff work closely with robots to assemble the E-Tron GT's high-strength steel and aluminum body. Impressively, the planning for the expansion and fit out of the Böllinger Höfe plant was all done virtually and helped greatly by the use of VR headsets.

The plant is also unique at the Volkswagen Group in that it will for the first time build two technically different cars on the same line, one a battery-electric sedan and the other a V-10-powered, mid-engine supercar. Both models are moved through the plant using either self-driving sleds or a common monorail system.

Once a car is completed, it's then taken on a 25-mile test drive covering both suburban roads and highways. Here, specialist staff test the performance and also make sure all moving parts fit together exactly, without rubbing or creaking sounds, even when driven over cobbled streets. The car then goes through a water test to check for any leaks before it goes through a final test in a pair of consecutive light tunnels where staff look for any improper joins or gaps, as well as paint defects.

The E-Tron GT shares its J1 platform with the Porsche Taycan. The E-Tron GT is expected to adopt the biggest battery designed for the platform, a 96-kilowatt-hour unit, and an electric motor at each axle. The platform's fast-charging capability will mean E-Tron GT owners will be able to charge the battery to 80% in about 20 minutes. The EPA-rated range will likely be somewhere around the 200-mile mark.

And so that it doesn't step on the toes of its Porsche sibling, expect the E-Tron GT to have a peak output of about 590 horsepower, positioning it somewhere between the Taycan 4S and Taycan Turbo. A more potent RS version of the E-Tron GT is also coming, and possibly early in the life cycle.

Look for a debut of the E-Tron GT later this year. It's expected on sale next year as a 2022 model.