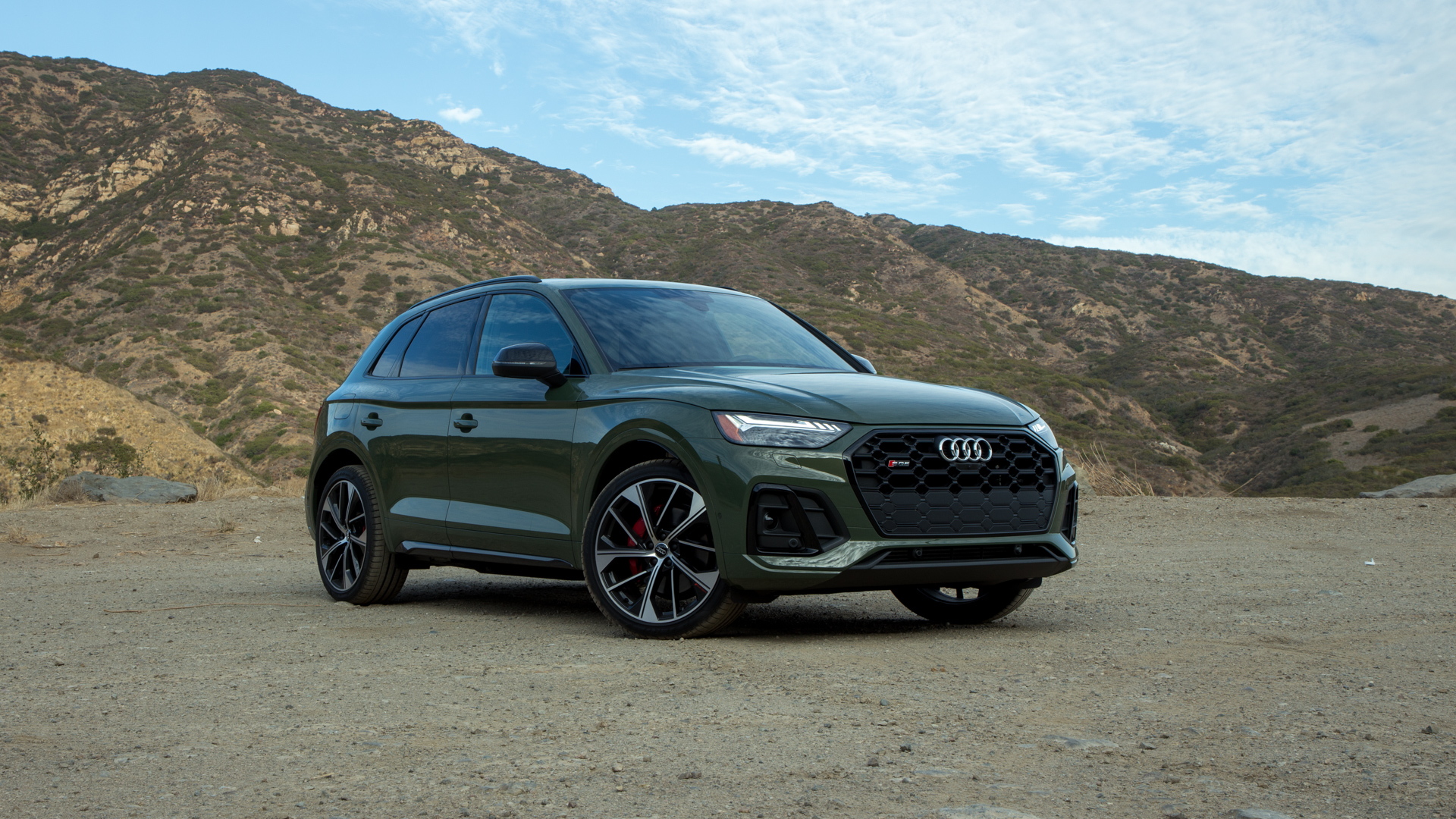 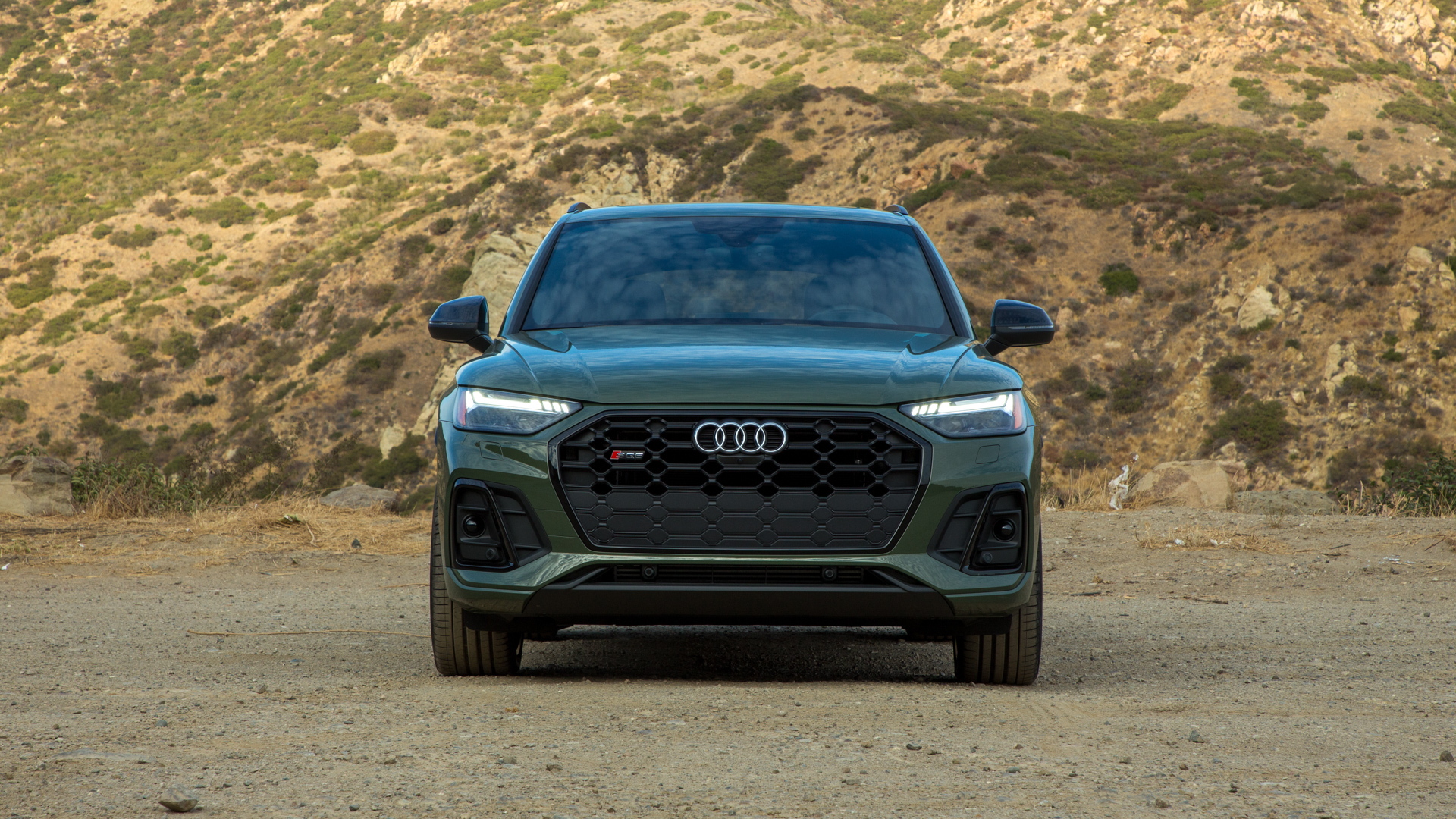 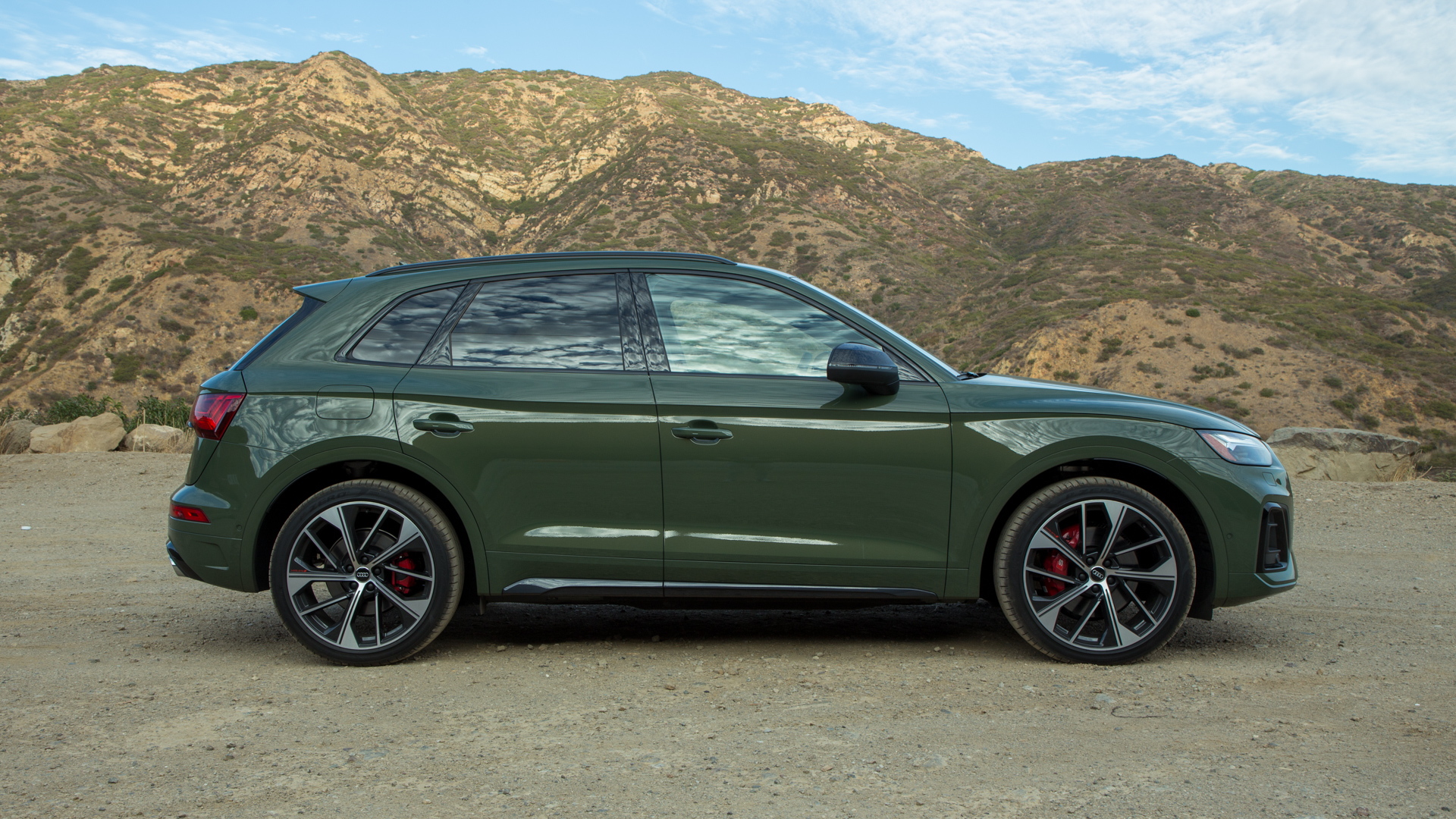 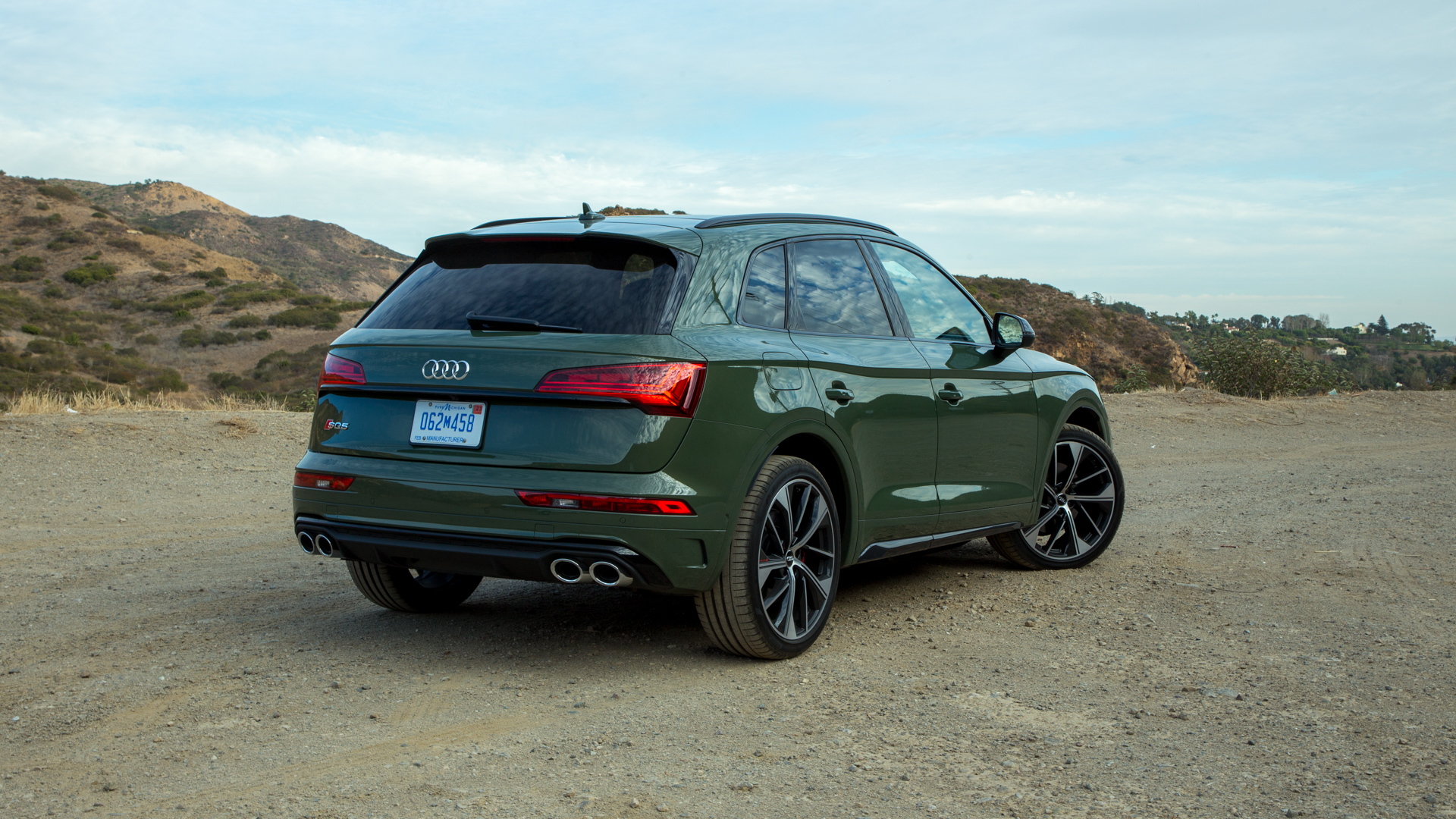 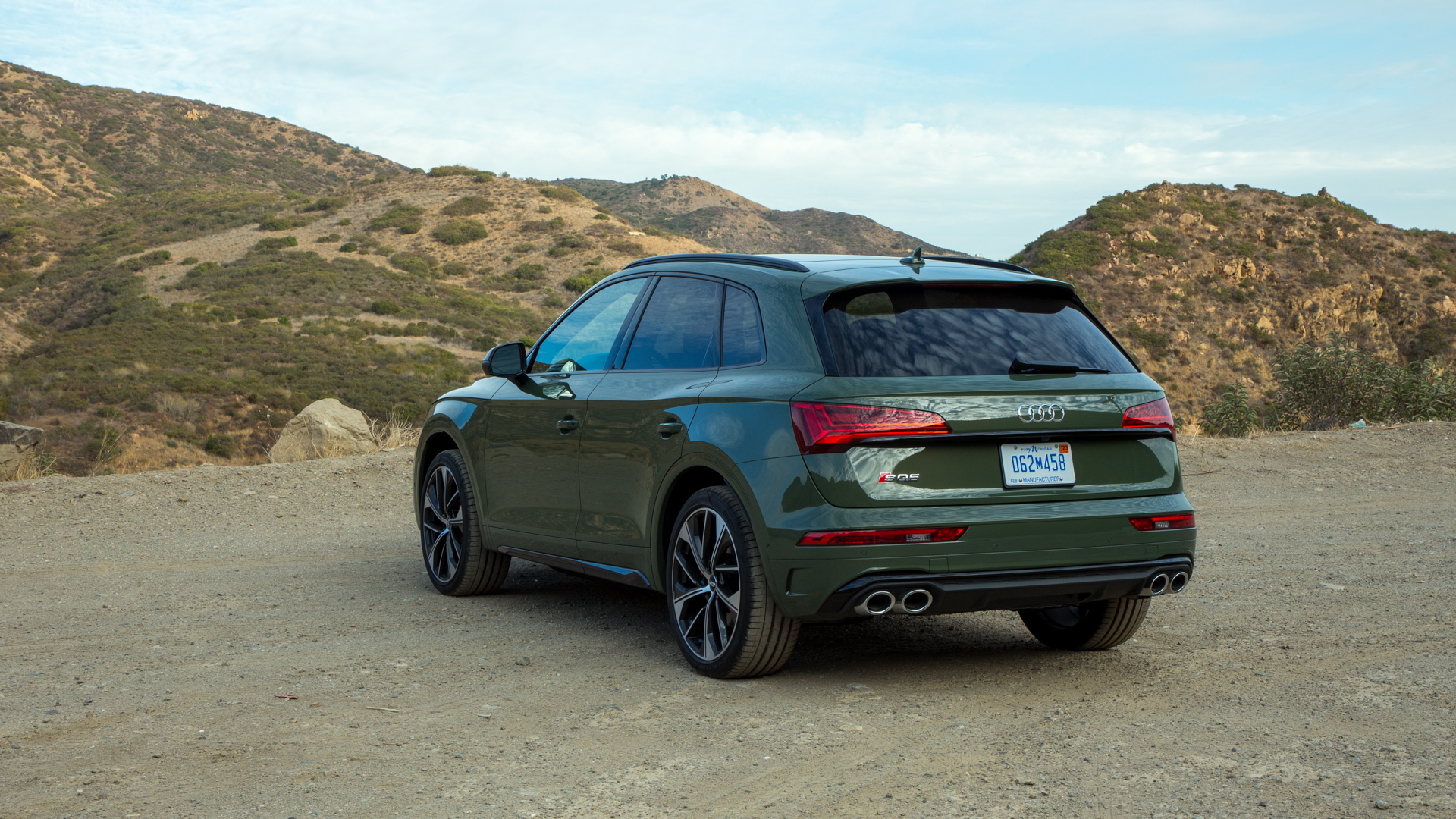 Buying a family car doesn’t have to feel like giving up, according to the refreshed 2021 Audi SQ5. The updated compact luxury SUV seems to come with an insistence that a practical family choice can still be fun and it attempts to prove that with an S badge, four tailpipes, and suspension upgrades.

I loved the “District Green Metallic” paint that my SQ5 test vehicle came with, but I came away unconvinced of that notion. It’s not that the SQ5 isn’t good, it can fit a family and is quick enough to get all of their stuff flying around the cargo area. But it lacks spirit, it insists that it’s fun rather than being so.

The engine is the same as last year’s model, a turbocharged 3.0-liter V-6 that makes 349-horsepower and 369 pound-feet of torque and is mated to an 8-speed automatic transmission. Quattro all-wheel drive is standard as well, with a default 40:60 torque-split to give the SQ5 some rear-drive bias.

Curiously, even though the power output is held constant with last year’s model Audi says the updated SQ5 is actually 0.4 seconds faster from 0-60 mph, dropping that time down to 4.7 seconds. This is thanks to new gear ratios, a new final drive ratio, and reprogrammed launch control.

From the driver’s seat, there doesn’t seem to be much difference. I didn’t get a chance to launch the SQ5 really hard to see if the 0-60 mph sprint feels that much quicker, but I did drive the SQ5 on the exact same canyon route I took with the pre-refresh model and it feels much the same. The powertrain’s responsiveness still ranks as good overall, but not great. There’s a hint of turbo lag that accompanies hard stabs at the throttle. The turbocharged powertrains coming out of BMW and Mercedes-Benz these days seem to be more eager than those of their Audi counterparts. I still miss Audi’s supercharged V-6 from the previous generation SQ5, which went the way of the dinosaur in the name of the turbocharger’s greater efficiency. Though the SQ5’s fuel economy ratings (18 city, 24 highway, and 20 combined mpg) make me think, how much worse could they be with the old engine.

My test vehicle also came with the larger 21-inch black optic wheels with Pirelli P Zero summer tires, those big wheels seemed to not have a negative impact on ride quality and gave the SQ5 plenty of grip. Also equipped on the test vehicle were the S sport package and dynamic steering, the former of which includes a sport adaptive air suspension, rear sport differential, and red brake calipers.

I thought the SQ5 acquitted itself well on the canyon roads, controlling its weight and SUV ride height enough that it still feels planted. You can feel the suspension working hard underneath the SQ5 to keep it flat and it does an admirable job. Even with the addition of dynamic steering, I still found myself wanting more feedback. The wheel has an appropriate amount of weight but I’d like more of a heads up as to what those front tires are doing, especially when braking hard into a corner.

Though the engine’s output is the same, the multimedia system gets a large power boost in this refresh. Audi calls the new system “MIB 3” and it also adds a larger, higher resolution 10.1-inch center screen that fits the dash better and brings the SQ5 more up to par with competitors. I didn’t find the old system’s speed to be a problem before, but the new system does feel a touch smoother to operate. As an Android user, I did wish for wireless Android Auto but that perk is limited to iOS users and Apple CarPlay.

The screen looks great and is well placed to be in reach of the driver, but just like the old screen it has one giant nemesis: fingerprints. All screens attract fingerprints to a degree, but the Audi is especially sticky in that regard and if there’s any kind of sunlight on the screen they really stick out. Keep a soft cloth handy to clean regularly.

Another feature that the SQ5 added which I did not get to test was an integrated toll module. Here in California, the HOV lanes are starting to switch to toll lanes on more and more freeways so having this built into the car and not worrying if you packed or forgot to hold up the little electronic beeper is a welcome addition.

I was happy to see that the SQ5 does not go for the double-screen setup you see in many Audis these days, there are still physical controls for many of the climate functions below the screen. It may not look as fancy, but it’s still easier to use while trying to keep your eye level up and on the road.

The SQ5’s price is unchanged from the previous generation at $53,995 which is impressive considering the technology updates that come along with the refresh. What hasn’t changed is that to get an SQ5 outfitted in the way I’d like, that price shoots up pretty quickly.

My test vehicle stickered at $71,790 -- about $18,000 above the base price, or about a 33% increase if you want to think about it that way. And looking at the options list, I can’t find something that I’d want to take off for any kind of easy savings. The Prestige package ($9,800) adds 23 separately listed features on the Monroney, including some safety features like adaptive cruise control, 360-degree camera system, and park assist, so I wouldn’t want to cut that. The S Sport package ($3,000) and dynamic steering ($1,150) also strike me as musts if you want to get the most performance out of the SQ5, without them it probably makes more sense to stick with the Q5 which is no slouch in its own right.

The 2021 SQ5 is sometimes fun and at all times competent, but it’s missing pizzazz. It seems to exist in a sort of purgatory, with the regular Q5 below it and a theoretical RS Q5 above. Looking at Audi’s lineup there are better alternatives for your aims. The S5 Sportback costs roughly the same, still seats five, and does a better job dynamically since it’s not an SUV. And if the point is to have a family friendly vehicle, the Q5 is there with a list of things you could buy with the price difference (a Prestige package equipped Q5 is around $57,000).

I don’t think the SQ5 is bad, in fact I think it’s quite good and easy to live with. But it didn’t stir me and for a vehicle with an S badge, it means something is missing.

Audi provided a loaner vehicle for Internet Brands to bring you this firsthand drive report.