It must thrill an automaker when one of its products grabs the top prize at a concours, especially when that show is the 2019 Amelia Island Concours d’Elegance and the automaker is Mercedes-Benz, a title sponsor of this event for its entire 24-year history.

The car, the only one known to survive, was created in-house at the Sindelfingen factory on the supercharged 540K chassis and was shown at the 1938 Paris Motor Show. Only a handful were built, powered by a 5.4-liter supercharged 8-cylinder engine producing 180 horsepower through a four-speed manual transmission. The sturdy chassis employed an independent double-wishbone front suspension and swing axle rear suspension.

The aerodynamic fastback coupe was commissioned by Ignacio Barraquer, an eye doctor from Barcelona, Spain. His family retained ownership of the car until 2004, when it was sold to collector Arturo Keller, who had the car restored by Paul Russell. 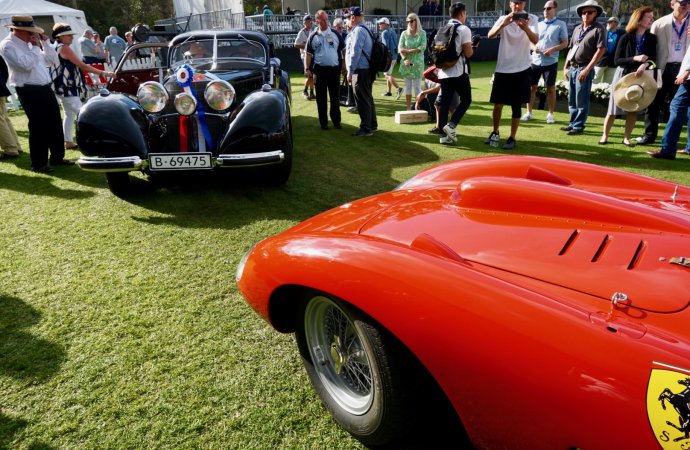 Best of Show winners at Amelia Island meet in the winner's circle, photo by Larry Printz

Joining the Mercedes-Benz on the Amelia Island winner’s stand as Best in Show Concours d’Sport was a 1957 Ferrari 335 S owned by Cavallino Investments of Cortland, Ohio.

At the time this car was built, Ferrari had won the World Sportscar Championship. So it’s no surprise that the car was very advanced for its time, having started as a 290 MM, before being updated to a 315 S and finally a 335 S. Its power comes from a 60-degree V12 boasting 24 plugs, two valves per cylinder, twin overhead camshafts and generating 360 horsepower.

The 24th annual Amelia Island concours featured approximately 300 cars and weather so stunningly beautiful, it must have been ordered by the Chamber of Commerce.

Winning cars and their owners

Editor’s note: The ClassicCars.com Journal is your source for Amelia Island news – from collector car auctions and shows to the Amelia Island Concours d’Elegance. Read more of our coverage on our dedicated page.

This article, written by Larry Printz, was originally published on ClassicCars.com, an editorial partner of Motor Authority.