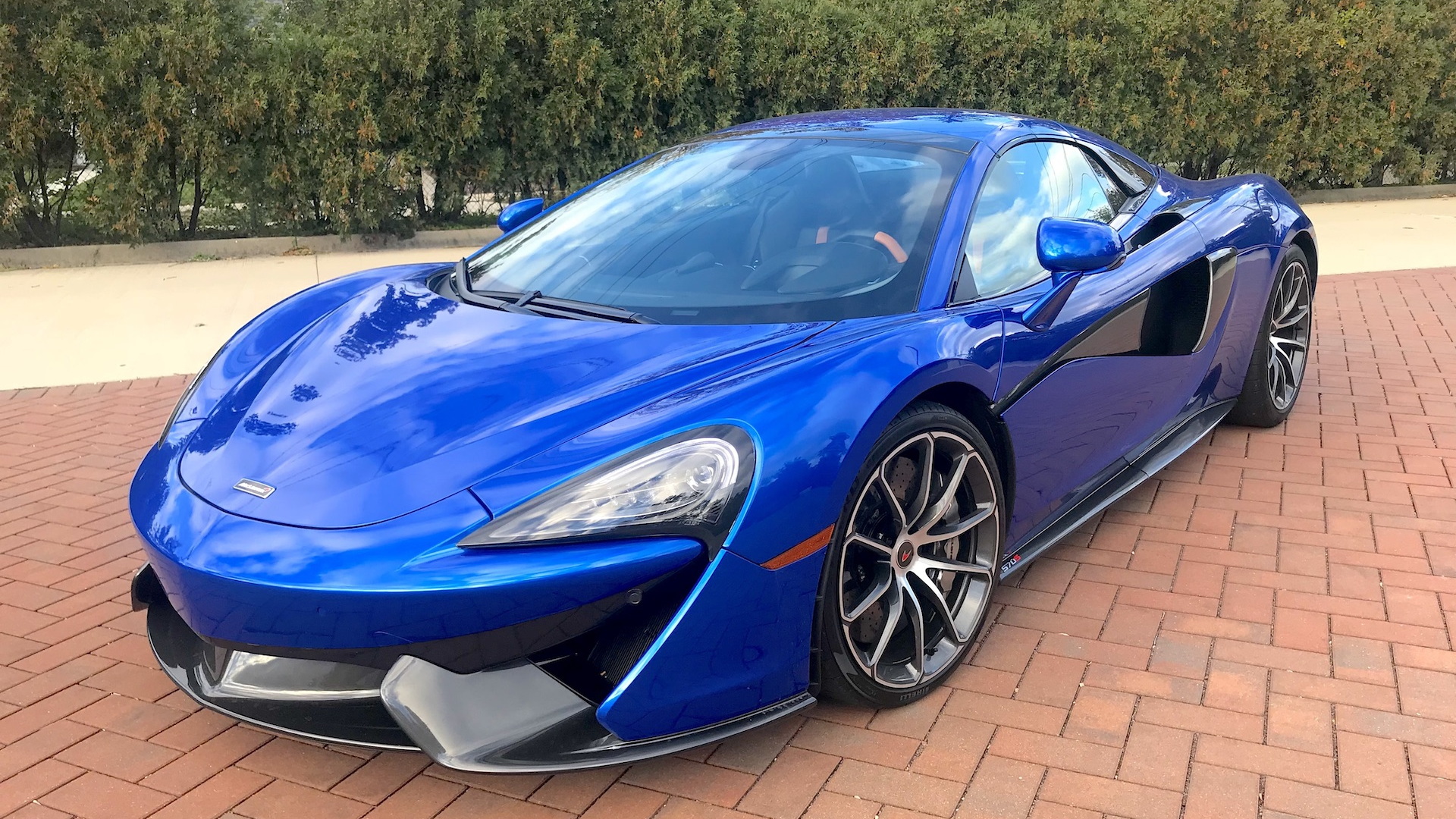 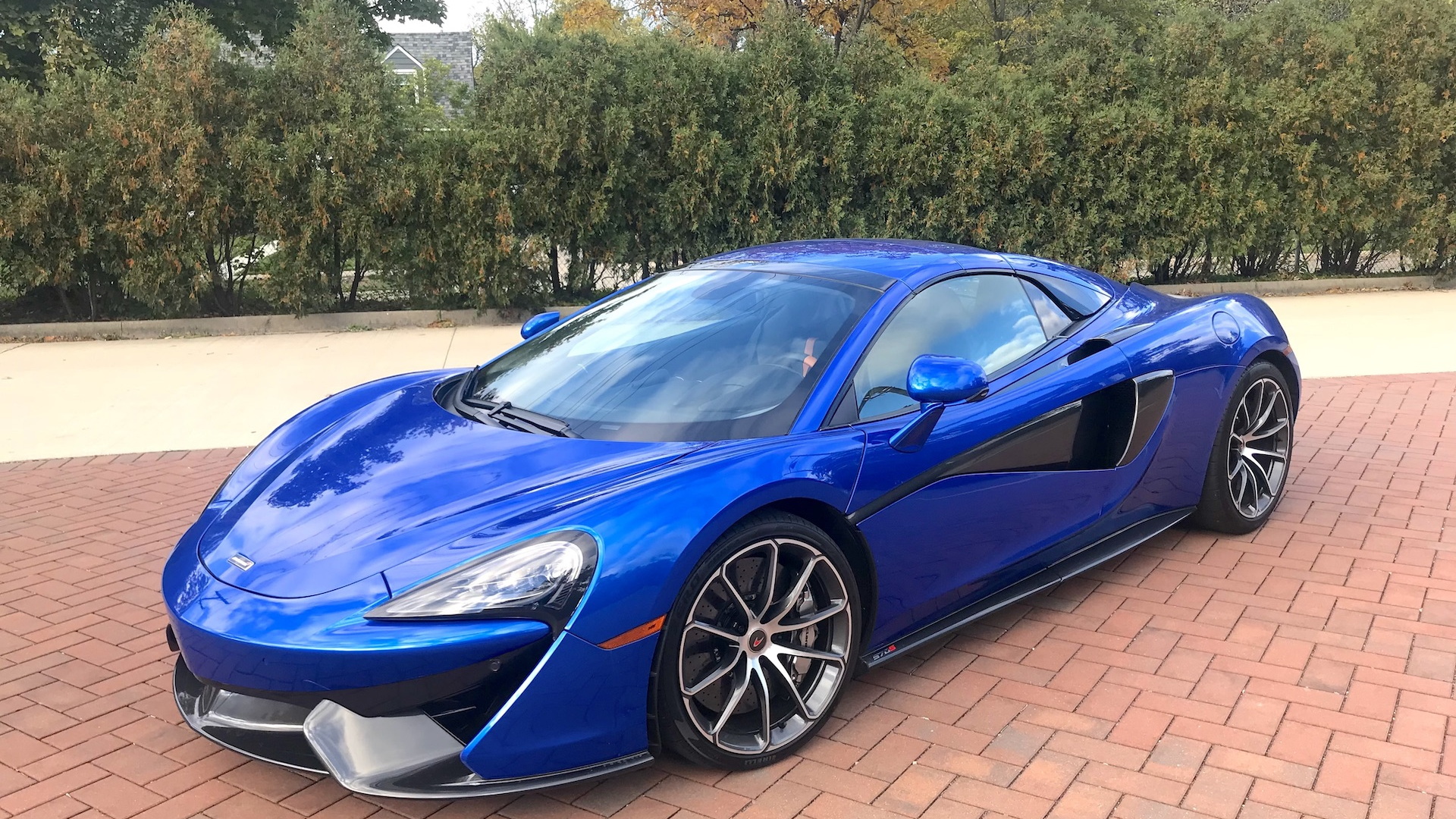 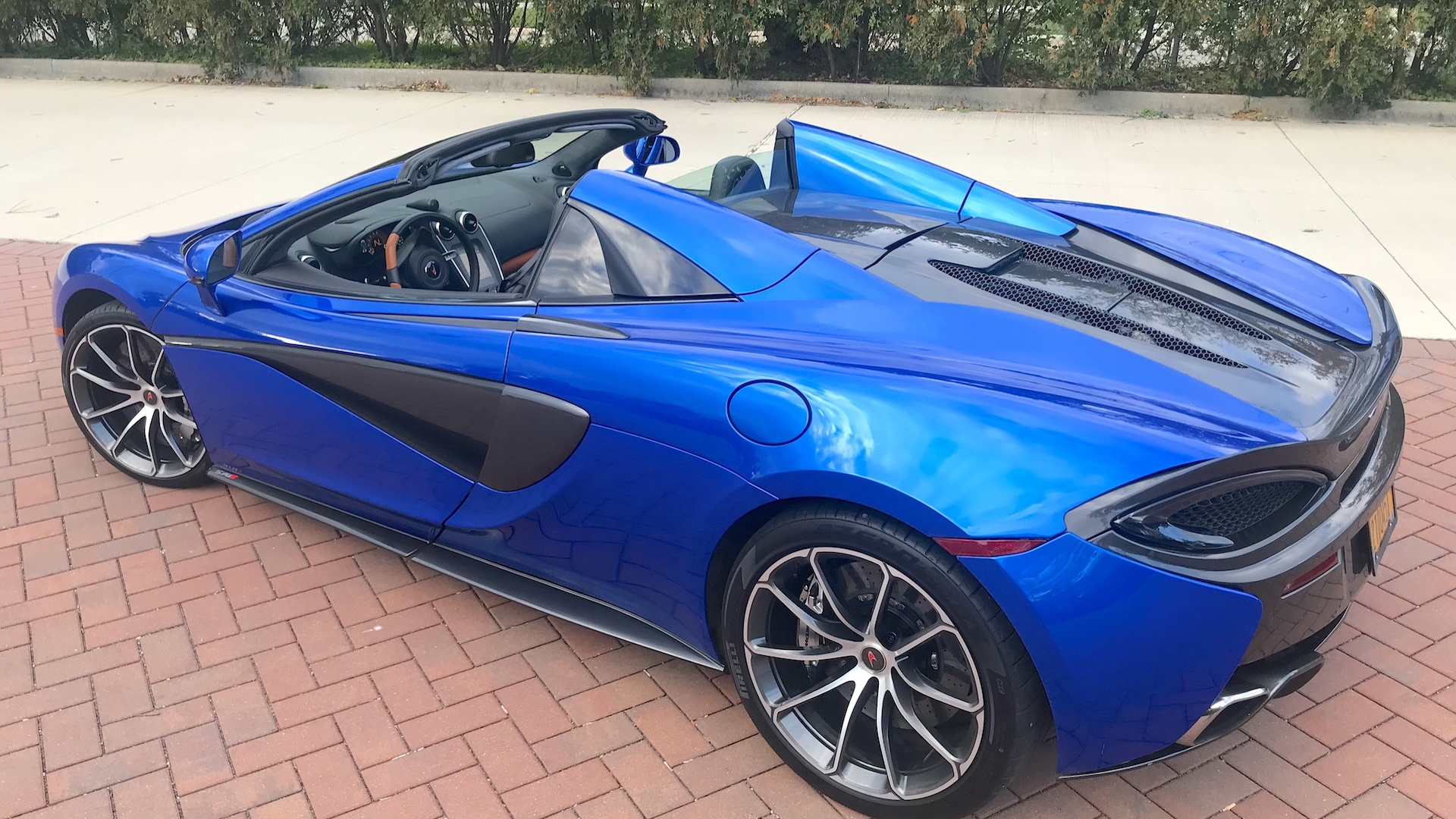 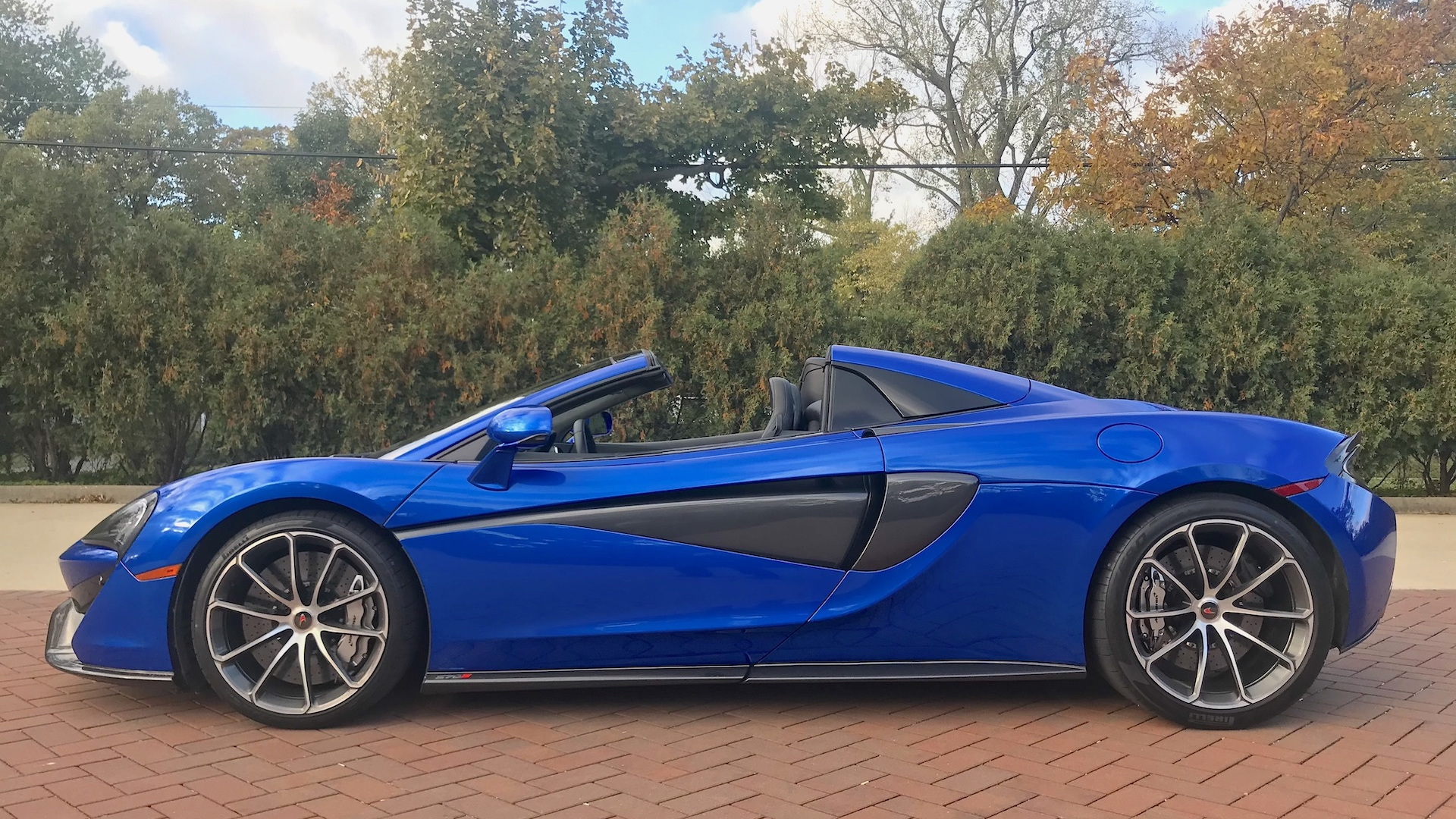 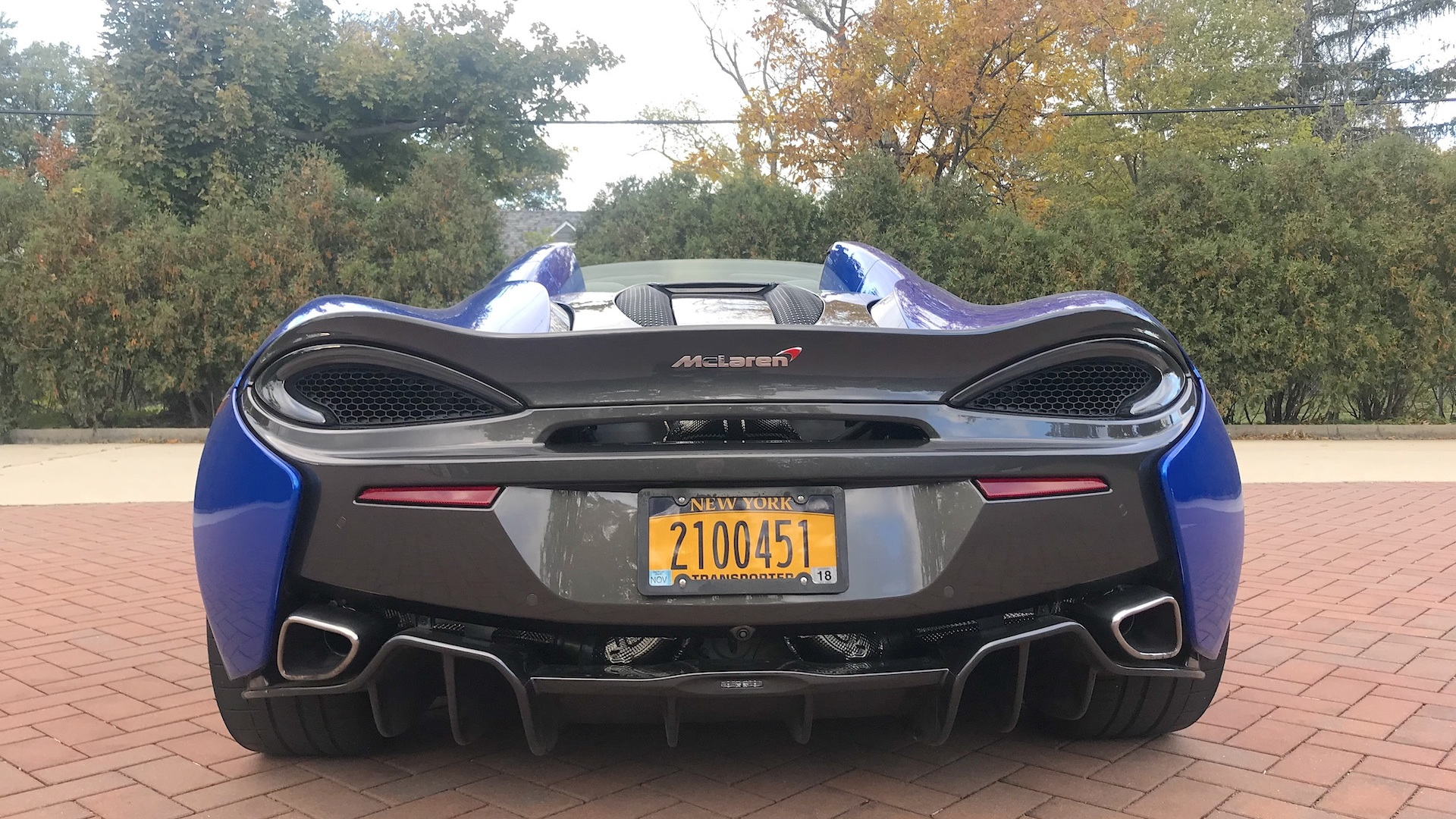 In Hales Corners, Wisconsin, last Saturday night a 14-year-old boy named Sam reached over and pushed down on his mom’s knee to get the family’s Chrysler Town & Country moving. Her foot went to the floor, the Chrysler Pentastar V-6 perked up, and the van accelerated at a modest clip. “Meh, it’s just not the same,” Sam said.

As a McLaren, that is.

Minutes earlier, I had taken Sam for a ride in a 2018 McLaren 570S Spider. I accelerated at a brisk pace onto the freeway, drove at a whopping 30 mph in a couple roundabouts, and kicked the tail out in a corner. It was fairly tame stuff for a car of the 570S’s capability but really cool for a 14-year-old boy. Sorry, mom.

Sam’s ride was my attempt to find a way to enjoy this convertible sports car on a cold Midwestern day. While I would usually take a beast like this to the Autobahn Country Club for a few laps around the track, McLaren forbids any track days except for those it runs. The convertible body style would have been great a couple weeks ago when it was 81 degrees, but the temperature had since fallen into the 30s and 40s, so top-down driving wasn’t in the cards.

McLaren was offering me cake, but insisting I only nibble at the corners.

Still, when life hands you a McLaren, you have to enjoy it, so I figured I’d share it with others and try my best to make up a good drive route in an area notorious for straight suburban stop-and-go roads.

Base isn’t so base.

The 570S is McLaren’s “base” car. It’s part of the brand’s Sports Series, which is aimed more at grand touring than ultimate performance. Still, the structure is a carbon fiber tub that ensures the coupe and Spider share the same level of structural rigidity. A 562-horsepower 3.8-liter twin-turbocharged V-8 sits behind the driver, and it pushes the car to a top speed of 204 mph.

That’s a supercar design and those are supercar numbers, even though McLaren refers to the 570S as a sports car.

The differences from the coupe are relatively minor. The power-operated hardtop opens and closes at the touch of a button in 15 seconds at speeds up to 25 mph. A small power rear window acts as a wind deflector and a noise enhancer for the midship-mounted engine. The power top adds 110 pounds to the total weight, which comes in at 3,314 pounds. McLaren also extends the rear spoiler a half inch higher to make up for the change in body shape versus the coupe. The top speed is the same, but if you’re nuts enough to run all-out with the top down, V-max drops to a mere 196 mph.

Making a day of it

On a chilly Saturday I had lunch with a buddy at the best rib joint in town, then took him for a quick ride. After folding himself into the opening left by the dihedral passenger door, he commented that with so little room inside, there isn’t much luxury. He then reconsidered and said, “I suppose just owning this car is the luxury.”

On a clear freeway onramp I kicked the throttle down to let the twin-turbo V-8 unleash its fury, only to be thwarted by the 42-degree temperature. The Pirelli P Zero Corsa tires reacted poorly to the 42-cold. As they scrambled for traction and made the rear end dance I had to ease off the throttle or risk spinning out. Still, after a brief pause for the turbos to spool up, the car took off with gusto—too much for its tires—and its seven-speed dual-clutch transmission ripped seamlessly through its gears. Had the temperature been even 10 degrees warmer, the 0-60 mph time would have shot by in just 3.1 seconds.

I dropped him off, then set off on my customized drive route. I’ve probably made the drive from Chicago to Milwaukee a thousand times, but always on I-94. This time, I figured I’d stick close to Lake Michigan and follow Sheridan Road as far as it would go.

It’s an appropriate route for this car, snaking its way through the most affluent Chicago north shore suburbs. Think where the Ferrari was parked in “Ferris Bueller’s Day Off” because that’s literally where it was parked. Sheridan Road also curves left and right in various sections, which is a rarity around here.

The curves let me get a taste for the handling, which is almost supernaturally flat, even with the suspension in the Normal mode. Complemented by sharp, direct steering, and a high, firm brake pedal, the 570S benefits from the bones needed for the track capability of the brand’s even more capable cars.

Sport and Track modes are also available, but the ride tightens up to much that I left it in Normal and did my best to avoid larger potholes. Those I hit did their best to shake loose my fillings.

I’d love to tell you what handling is like on the track at the limit, but that would be having my cake and eating it too. Driving up through the beautiful suburbs of Wilmette, Winnetka, Highland Park, and Lake Bluff, the 570S seemed right at home. A car like this could be parked in any of these U-shaped driveways, along with a Range Rover or Escalade.

At suburban speeds in Normal mode, the twin-turbo 3.8-liter V-8 was a buzzy companion, but it never felt high-strung and didn’t demand to be flogged. In fact, it was a bit too docile for a supercar. I preferred to hit the Active button, then turn the powertrain mode switch to Sport to bring the engine forward, and I used Track when I planned to lay into the throttle. In those modes, the transmission holds onto gears longer, and turbo lag isn’t as noticeable. While full-throttle acceleration is thrilling, I found a big difference between the 562 horses of the 570s and the 710 mercurial ponies of the 720S. The 720S, which sits at the top of the lineup in the brand’s Super Series, provides jet-like propulsion.

The route eventually gave way to less-influential towns of Waukegan, North Chicago, and post-industrial war zones like Racine and Kenosha, where the car stood as stark relief, then joined up with I-94.

My route provided far better scenery than I get on a strictly freeway drive. It passed by a couple of Frank Lloyd Wright houses on Chicago’s north shore, took me to the Wright-designed SC Johnson headquarters in Racine, and kissed Lake Michigan at one point once I crossed the border into Wisconsin. It also turned an hour-and-20-minute drive into a three-hour tour. I’d complain in a Prius. Not in a McLaren.

Everywhere I went people appreciated the car. They gave me the thumbs up. Asked to take pictures of it, and told me it’s beautiful.

Sam especially appreciated the car. I spoke to him on Monday after a day at school. He told his friends he got to ride in a McLaren but couldn’t remember what model it was. He also said the seats were comfy, the interior design was clean, the car sat really low to the ground, and he liked the fact that he could feel the heat coming off the engine after I shut off the car. He finished by saying, “Thank you. That was fun.”

Maybe I didn’t get to experience the McLaren 570S in ideal conditions, but Sam will never forget it.