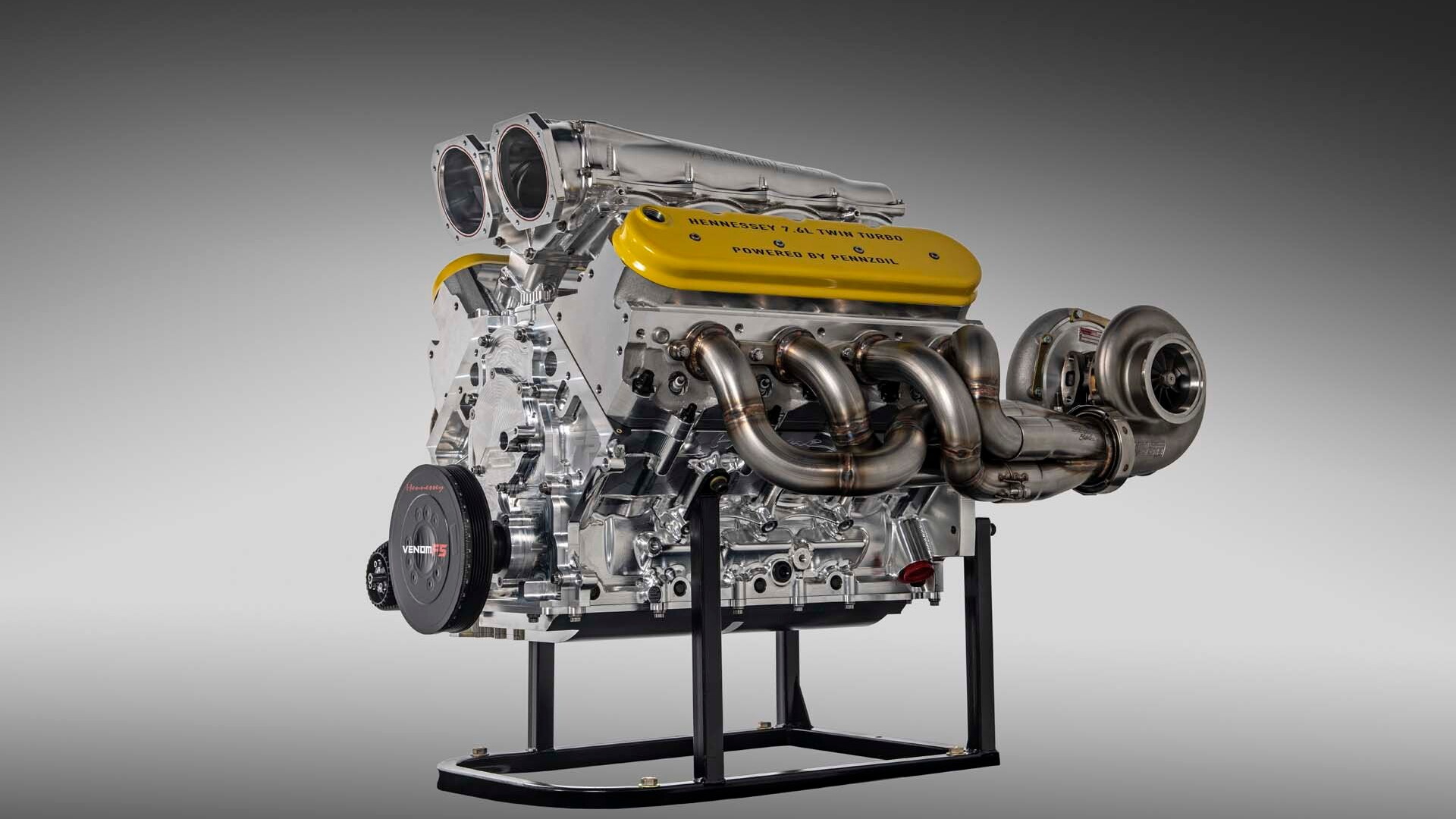 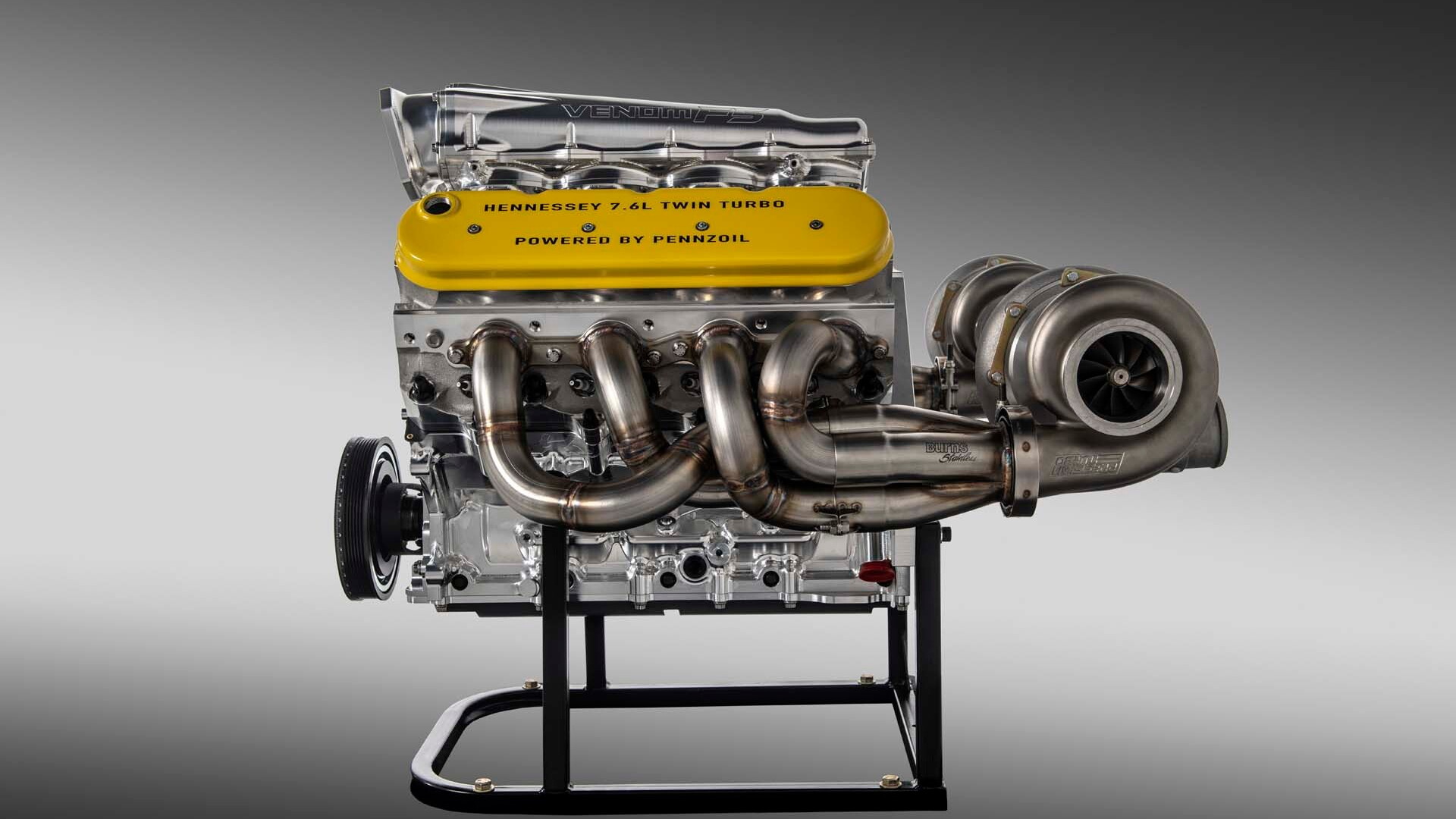 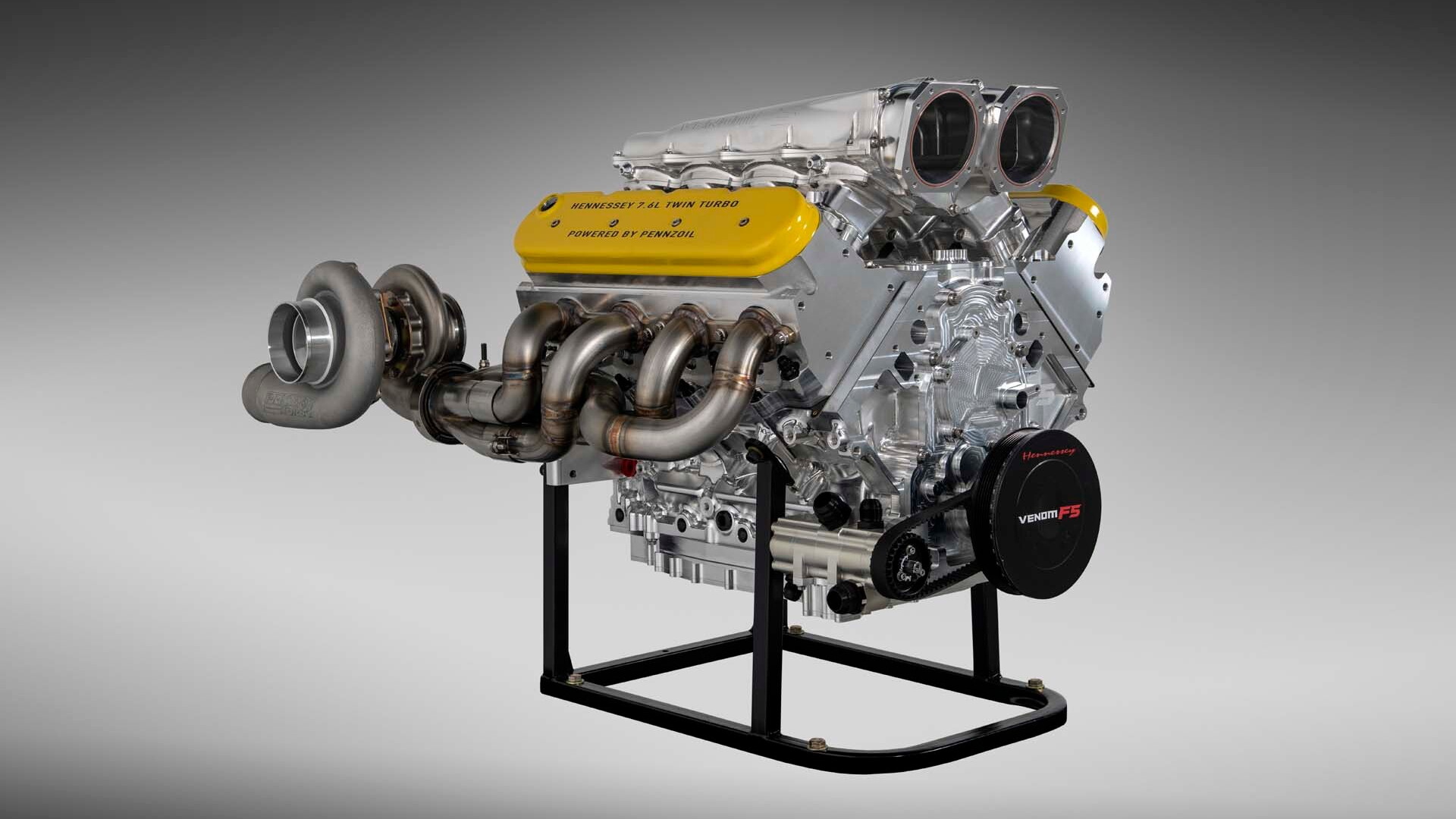 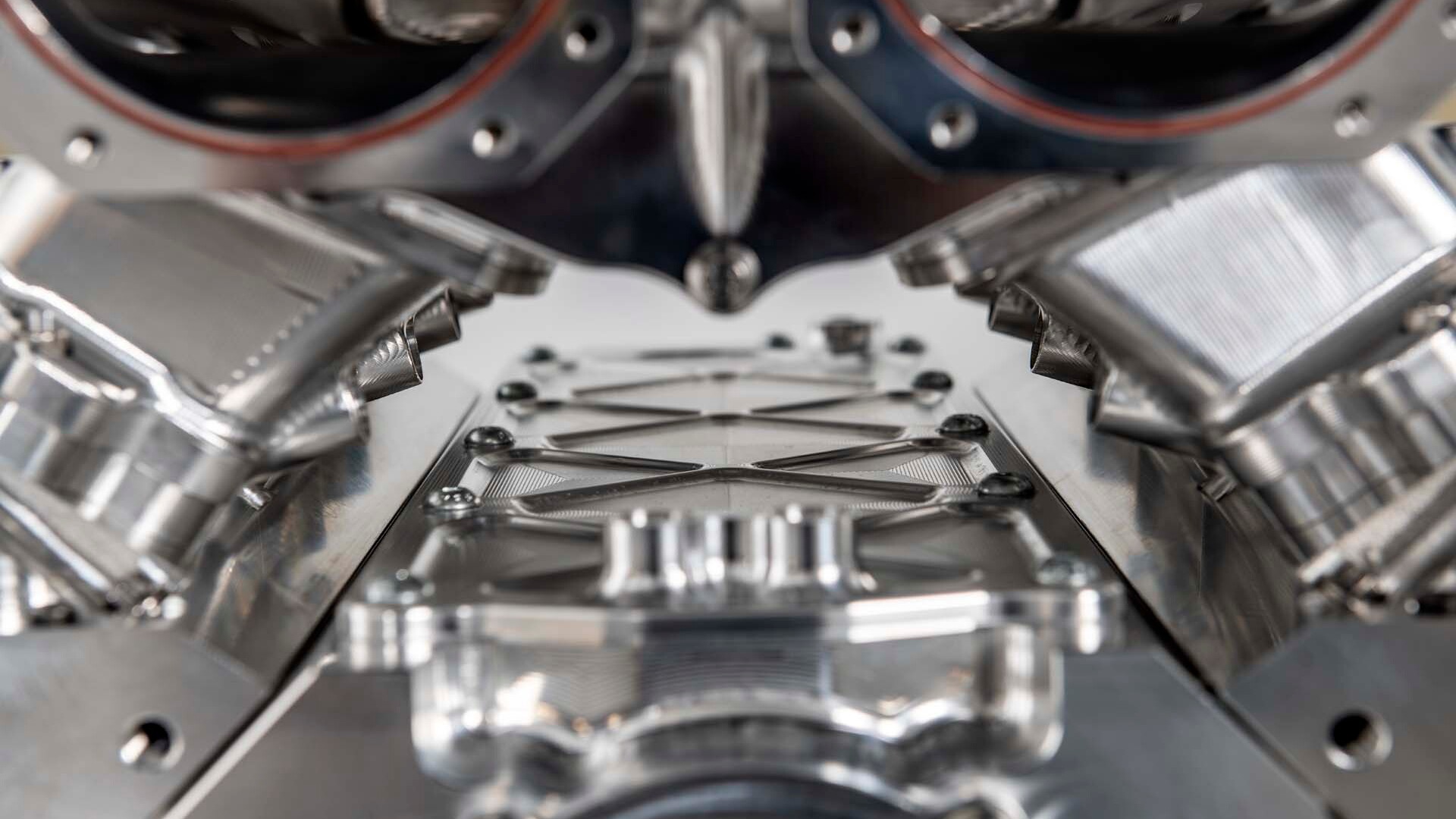 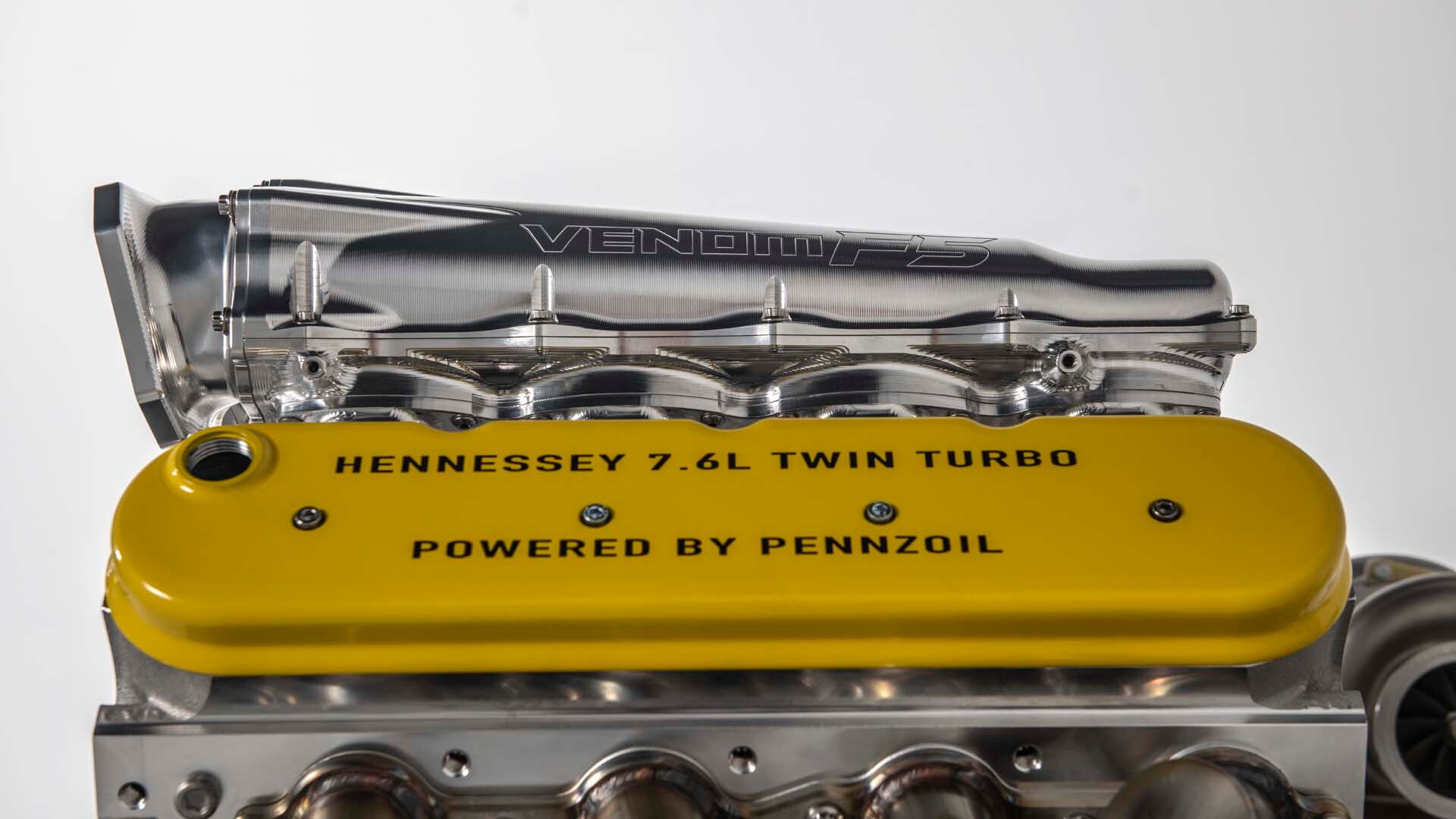 Almost a year on since Hennessey Performance Engineering first showed us its Venom F5 hypercar, the company has now locked in the first of the car's specs.

Using the backdrop of Friday's The Quail, A Motorsports Gathering in Monterey, California, Hennessey confirmed the Venom F5 will come with a 6.6-liter twin-turbocharged V-8 capable of delivering a staggering 1,600-plus horsepower and 1,300 pound-feet of torque.

That's about 100 horses more than cars like the Bugatti Chiron and Koenigsegg Regera are putting out, though in the horsepower wars it's the Rimac C_Two and its 1,914 hp that's still king. Nevertheless, as far as cars with internal combustion engines are concerned, Hennessey has set the new standard.

The engine is a newly developed unit made from billet aluminum and featuring steel cylinder sleeves, and it will run a 9.3:1 compression ratio and relatively high 24 psi of boost pressure generated by a pair of precision ball bearing turbochargers with billet compressor wheels. The engine also features stainless steel headers and a dry sump oiling system, enabling it to sit low in the chassis.

And what are those targets? The car's name provides a clue: the F5 in the name is a reference to tornado speed classification. F5 tornado speeds range from 260 to 318 mph, and Hennessey has said it aims to hit a top speed of 301 mph, which is right in the middle of that range. We'll remind you that the current top speed record for production cars is the 277.9 mph set by the Koenigsegg Agera RS last November.

What else do we know about the Venom F5? We know the will be based on a unique chassis developed by Hennessey, as opposed to a modified Lotus platform like the car's Venom GT predecessor. Some of the development work will take place at the Nürburgring, where Hennessey is hoping to run it under the 7:00 barrier. The only rear-wheel-drive production car to achieve such a feat is Porsche's 911 GT2 RS whose time is 6:47.3.

Production of the Venom F5 will be limited to 24 units and the first 15 build slots have already been sold.