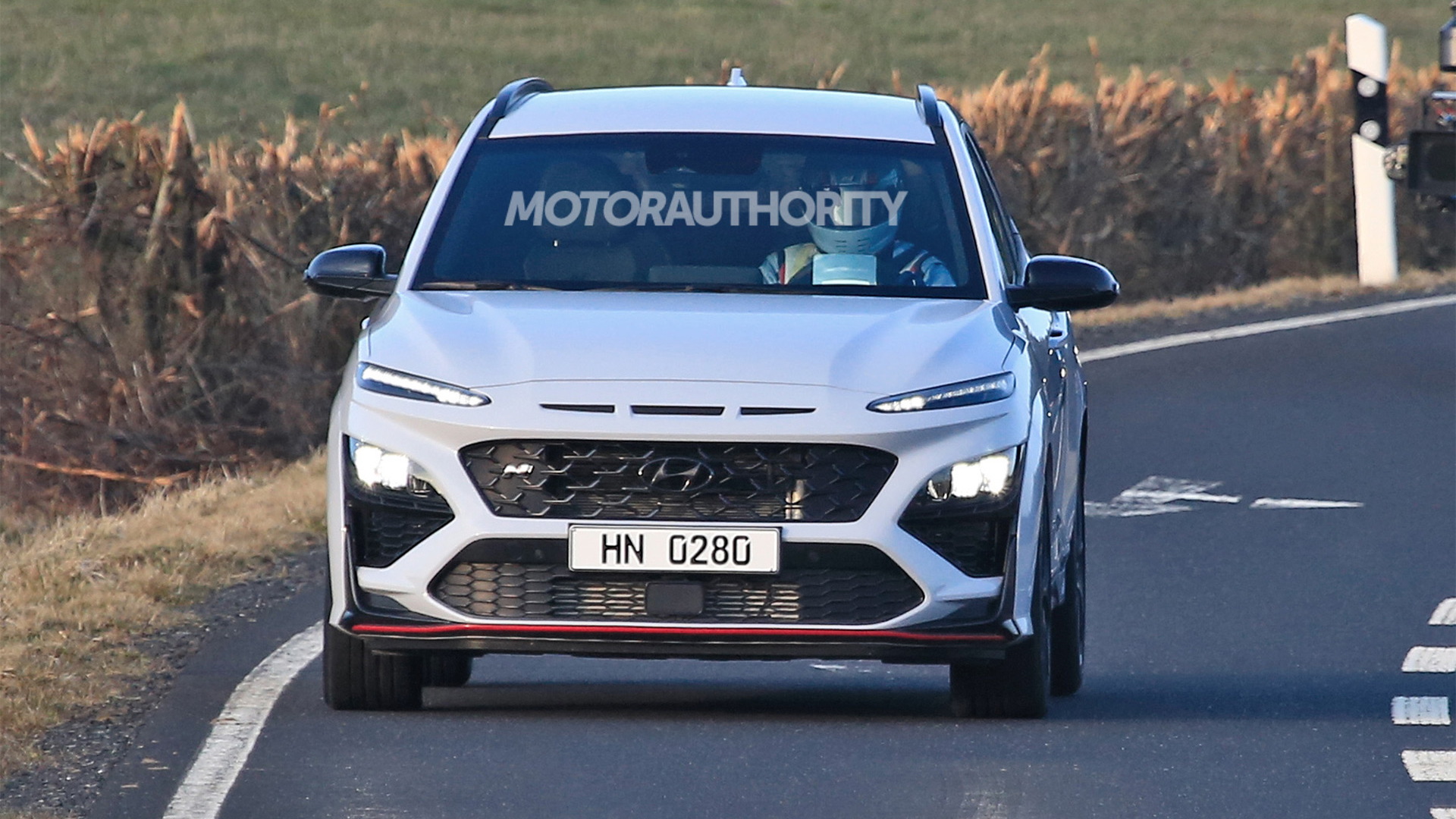 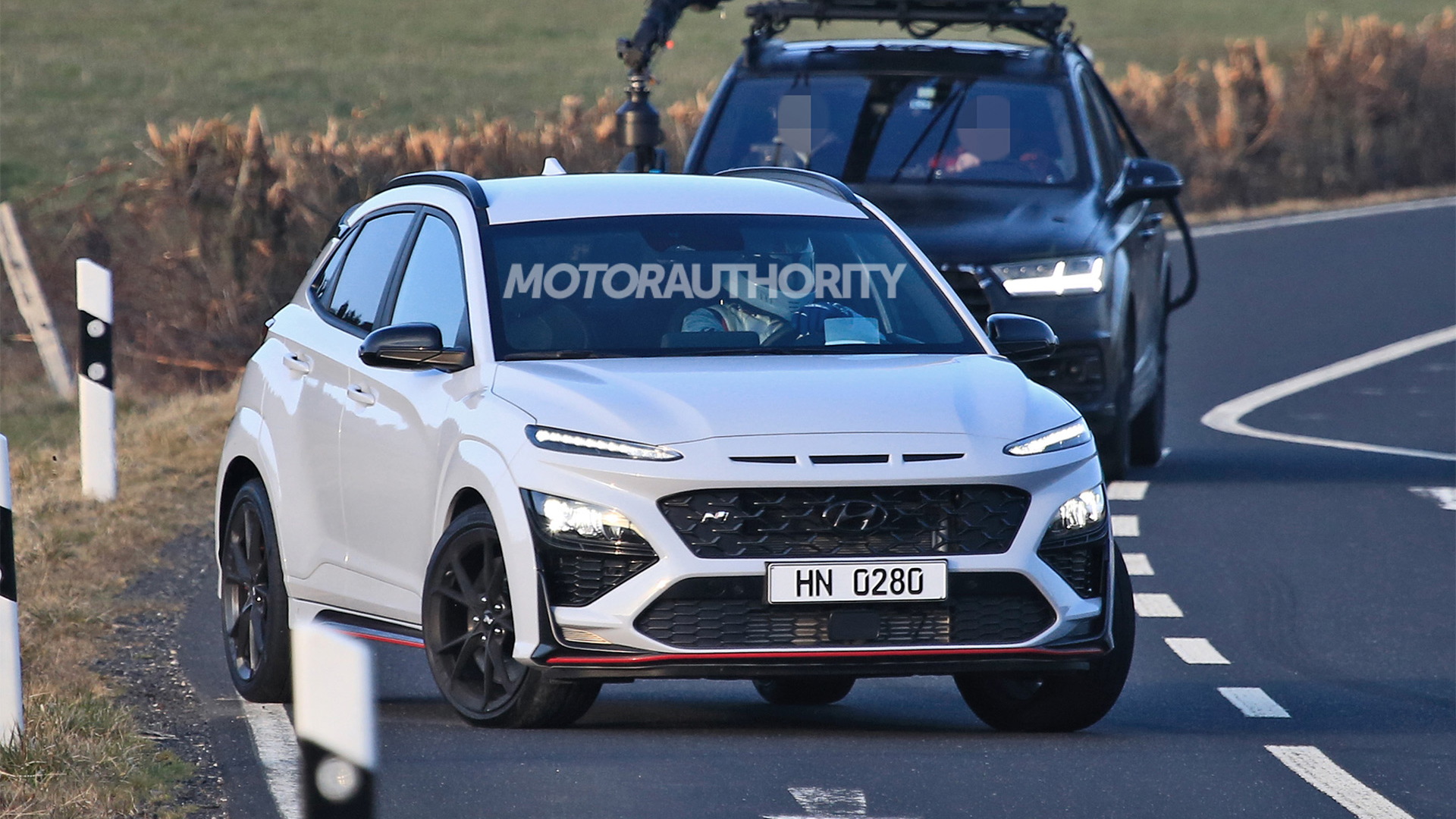 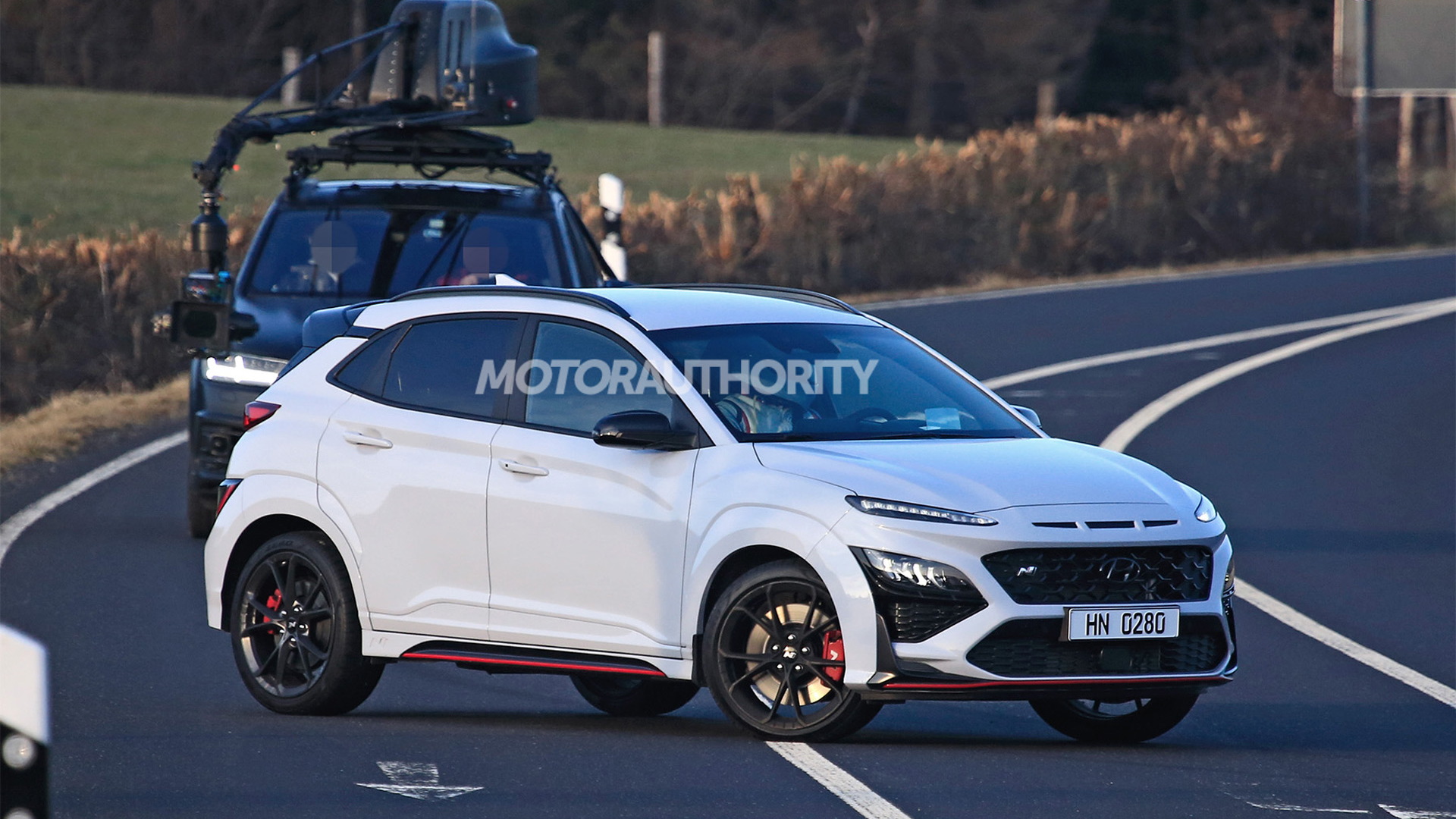 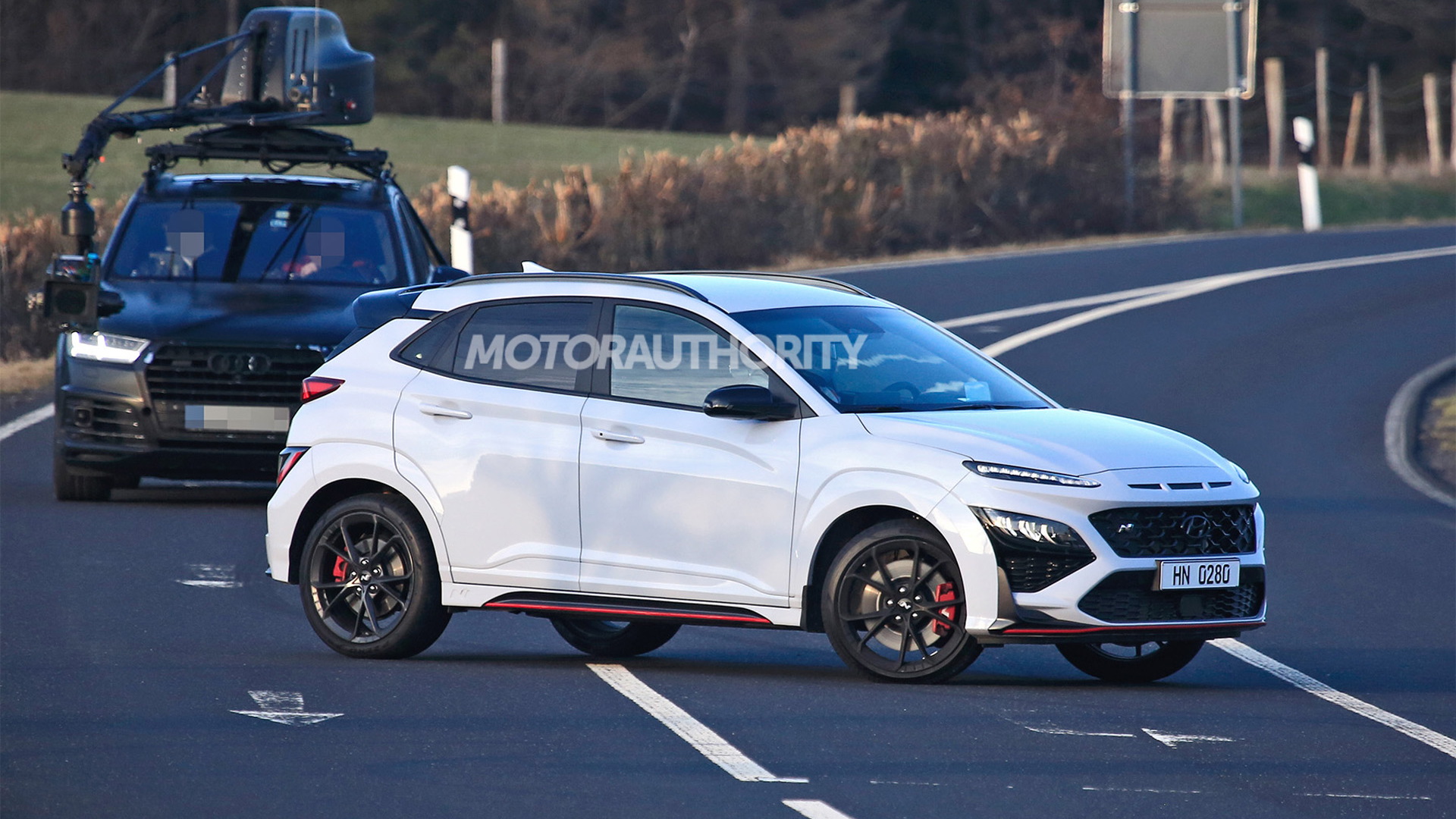 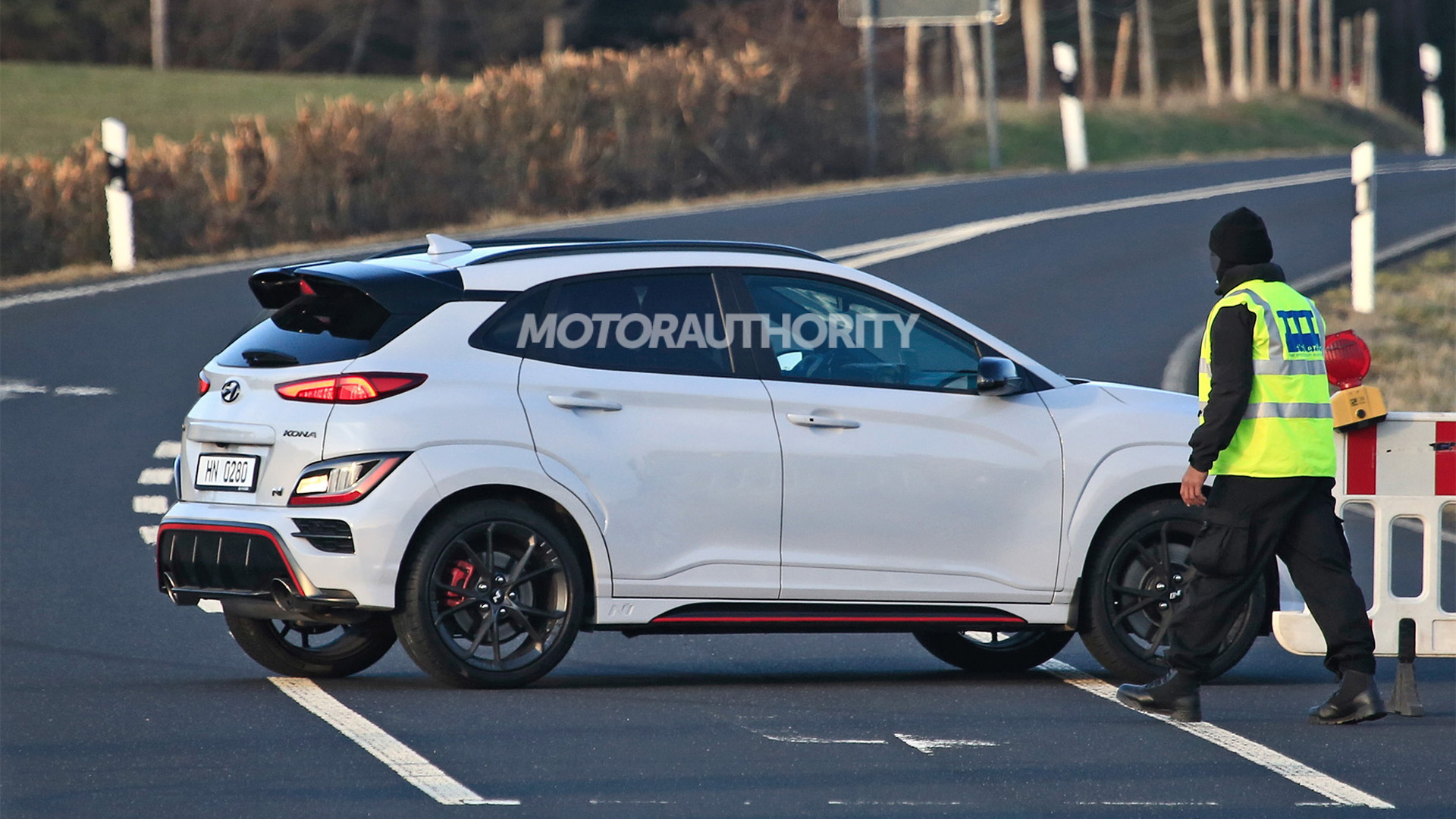 A hot version of the Kona subcompact SUV is coming later this year, and the vehicle has just been spotted without any disguise during an official photo shoot in Germany, close to where the Nürburgring is located.

Hyundai N boss Albert Biermann as early as 2018 had revealed he had already tasked his engineers with starting work on the Kona N in order to persuade senior management to give the vehicle the green light for production. We'll see it reach showrooms later this year as a 2022 model.

The Kona N is the first crossover offering in Hyundai N's growing lineup of dedicated performance models and will come with a similar mechanical setup to the 2021 Veloster N, and 2021 i30 N sold overseas. A 2.0-liter turbocharged inline-4 and 8-speed dual-clutch transmission will be standard, though it isn't clear if drive will be to all four wheels in the Kona N or just the front pair like in the Veloster N and i30 N.

The 2.0-liter engine in other Hyundai N models has ratings of 246 and 275 hp, while the 8-speed DCT, a Hyundai N-exclusive item, has a number of performance-oriented shift programs built in that alter the transmission's shift pattern depending on the style of driving. They are the NGS (N Grin Shift), NPS (N Power Shift) and NTS (N Track Sense Shift) programs.

The latest spy shots reveal an aggressive design for the Kona N, with the front end in particular dominated by large air intakes and a lip spoiler. A tamer version of the design features on the Kona N Line due on sale this spring as a 2022 model. Other interesting features include the dual-wing design at the rear and large exhaust tips. Hyundai also looks to be continuing the trend of using fake vents as design elements on the Kona N's rear fascia.

Hyundai fans can look forward to seven N models in showrooms by the end of the 2022. The first three have already arrived in the form of the updated Veloster N and new Elantra N Line and Sonata N Line, all of which arrived for the 2021 model year. These will be followed by the aforementioned Kona N Line, a Tucson N Line, an Elantra N and this Kona N.