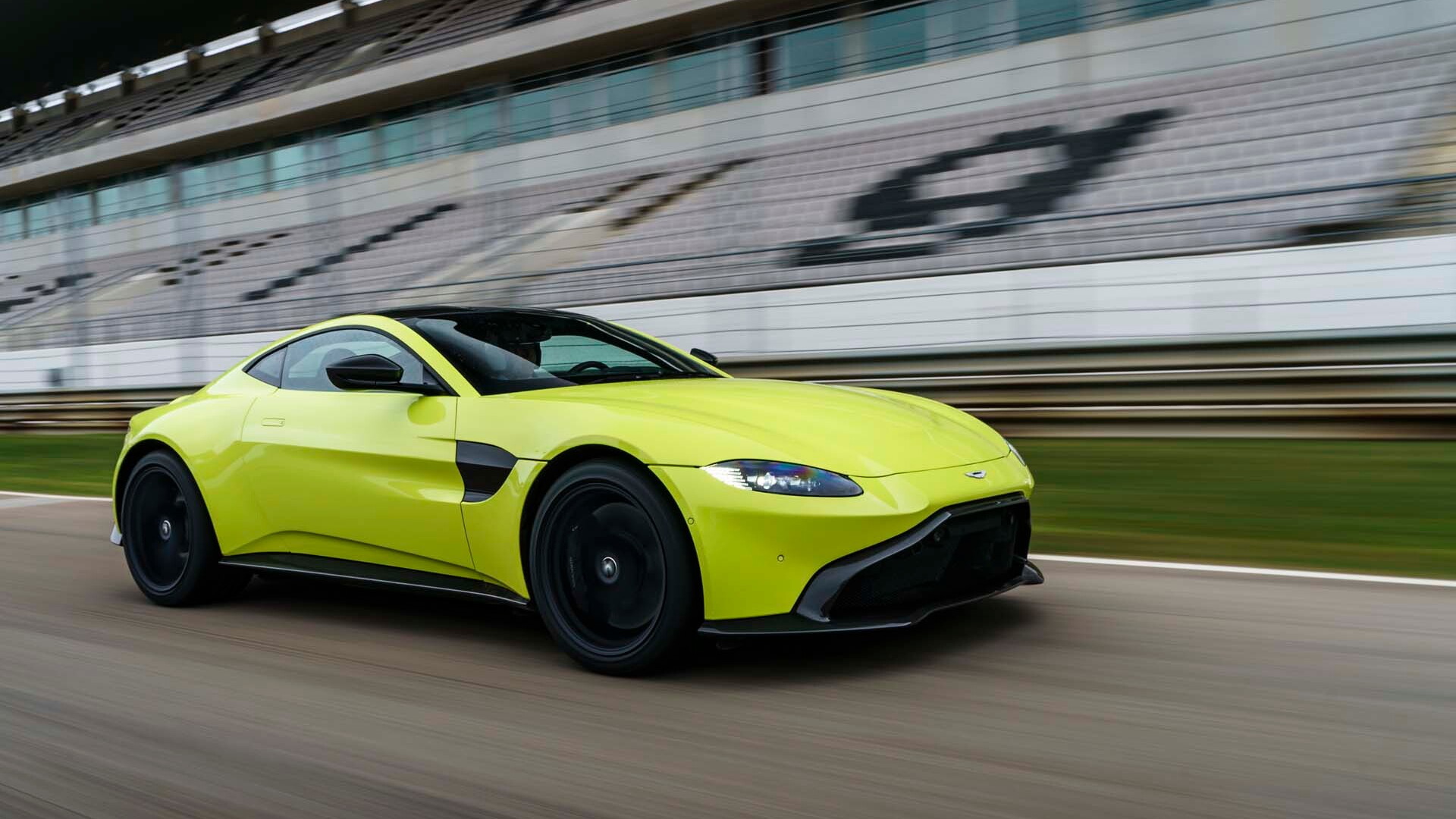 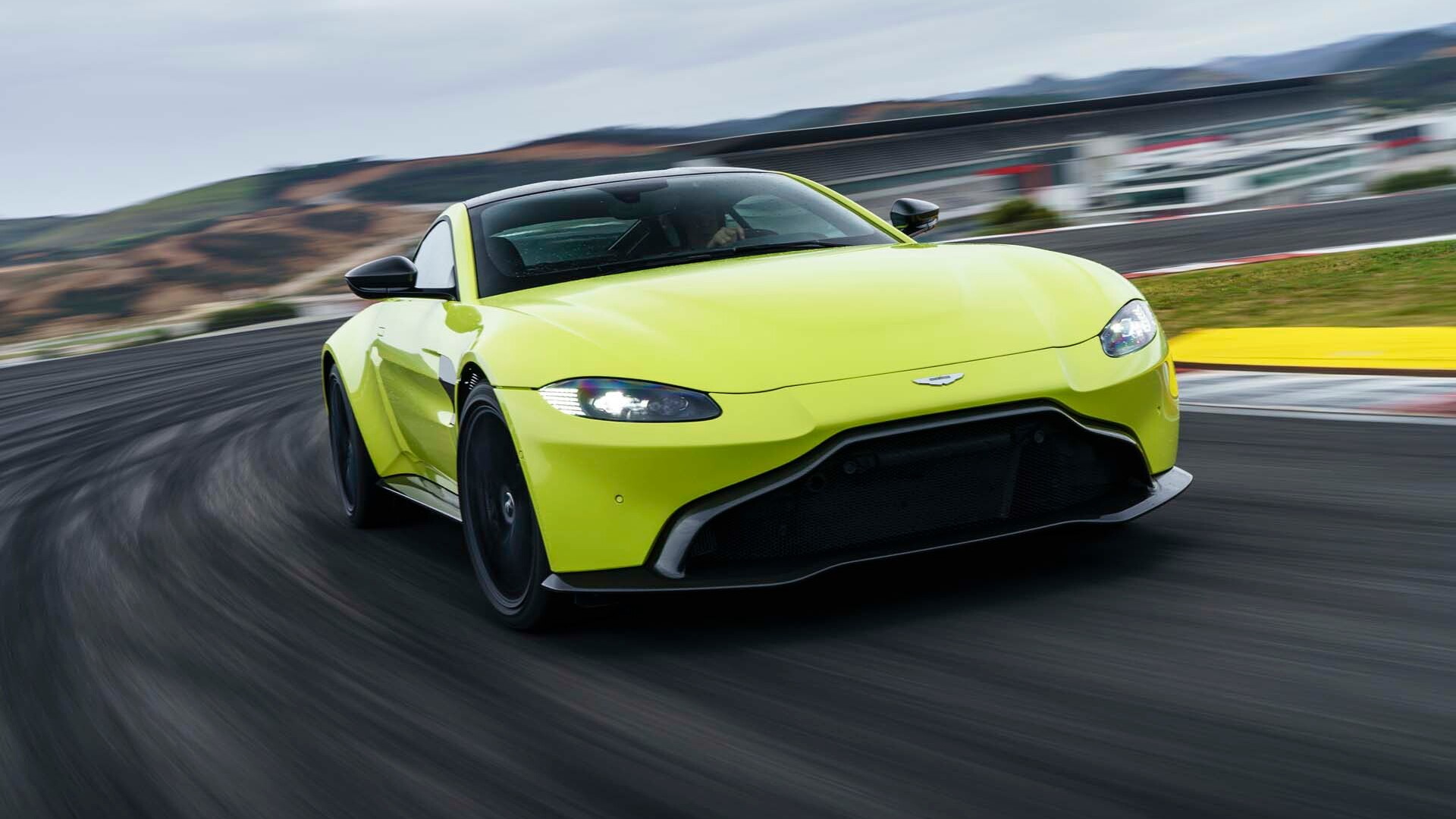 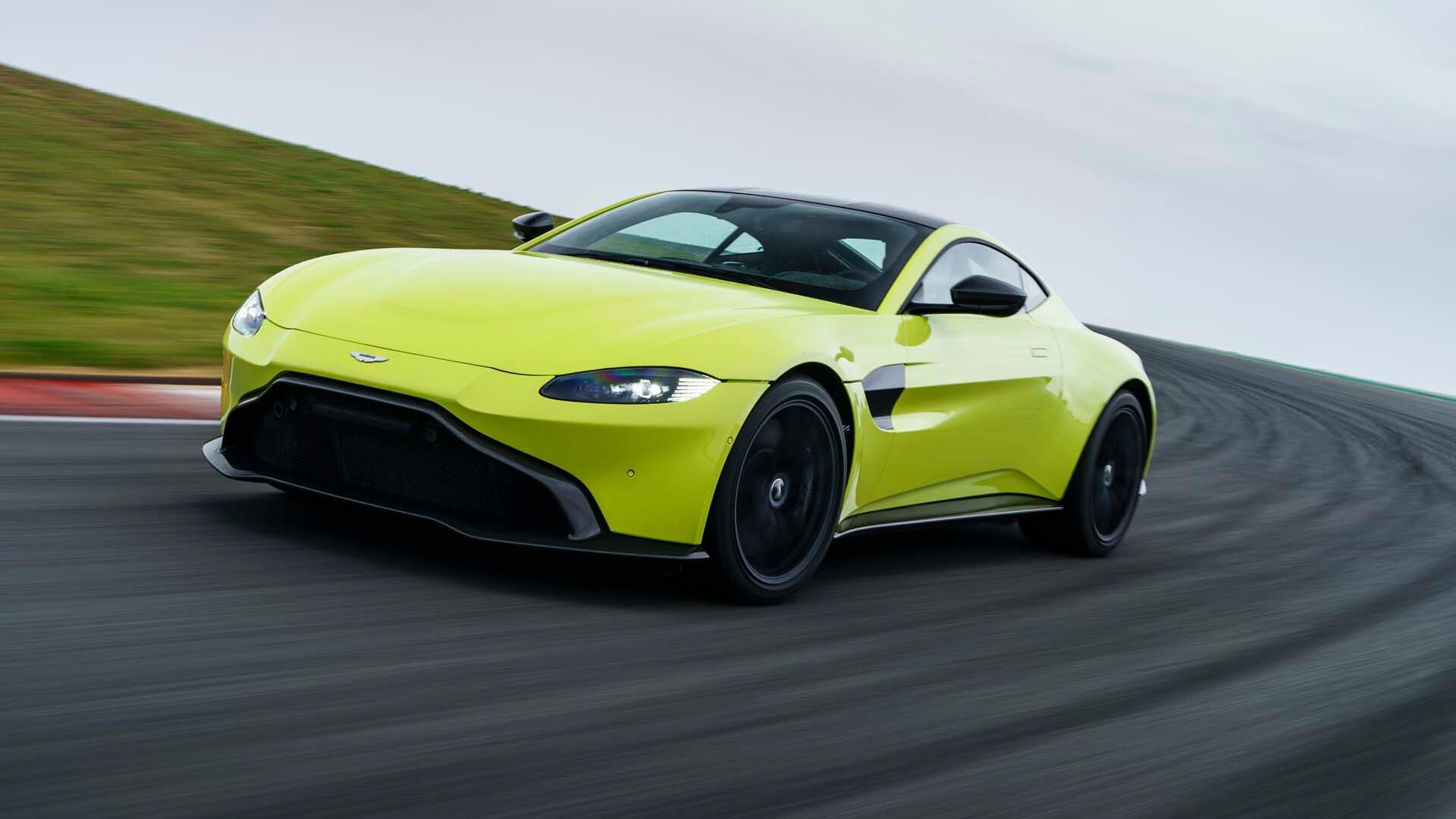 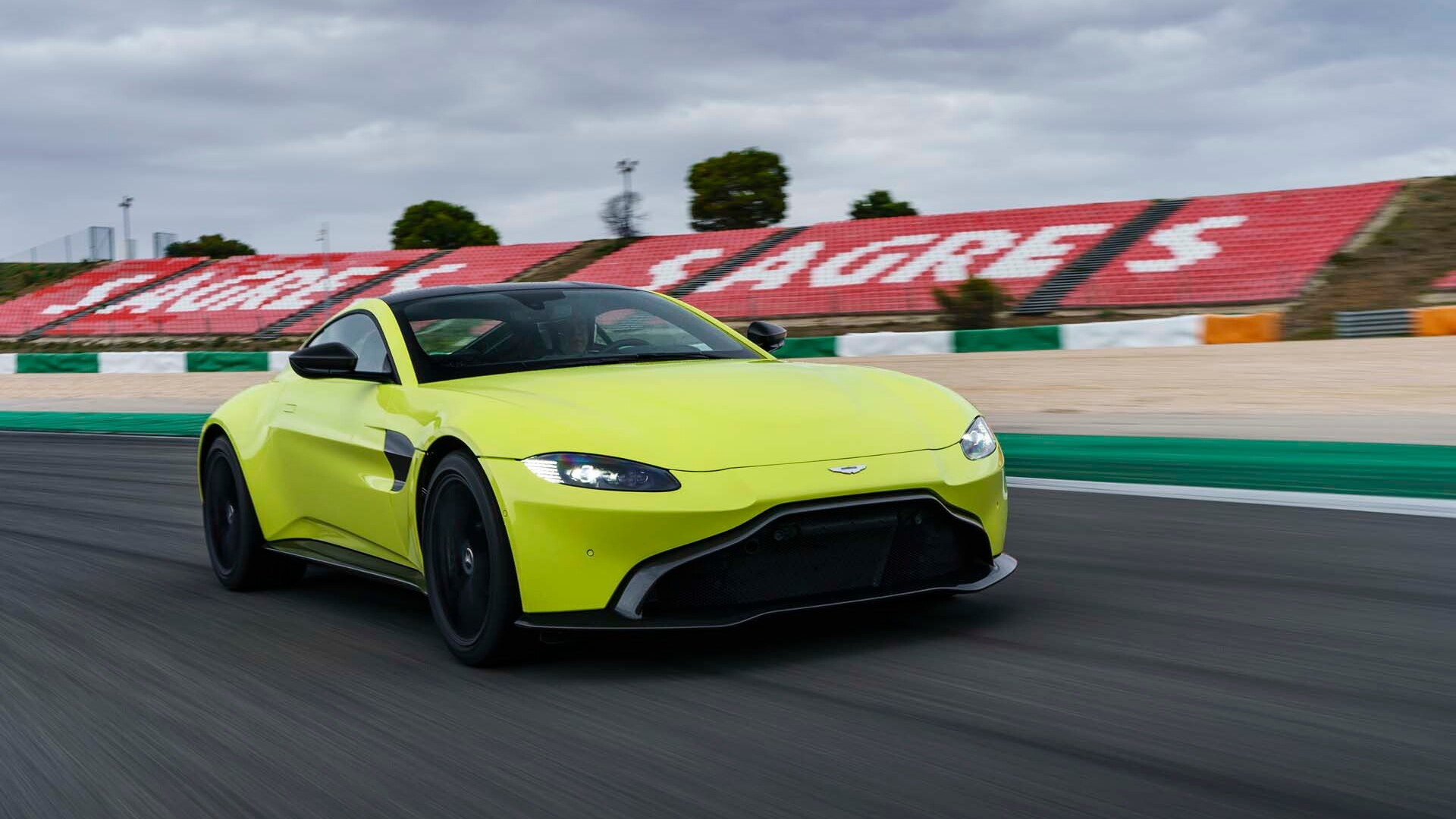 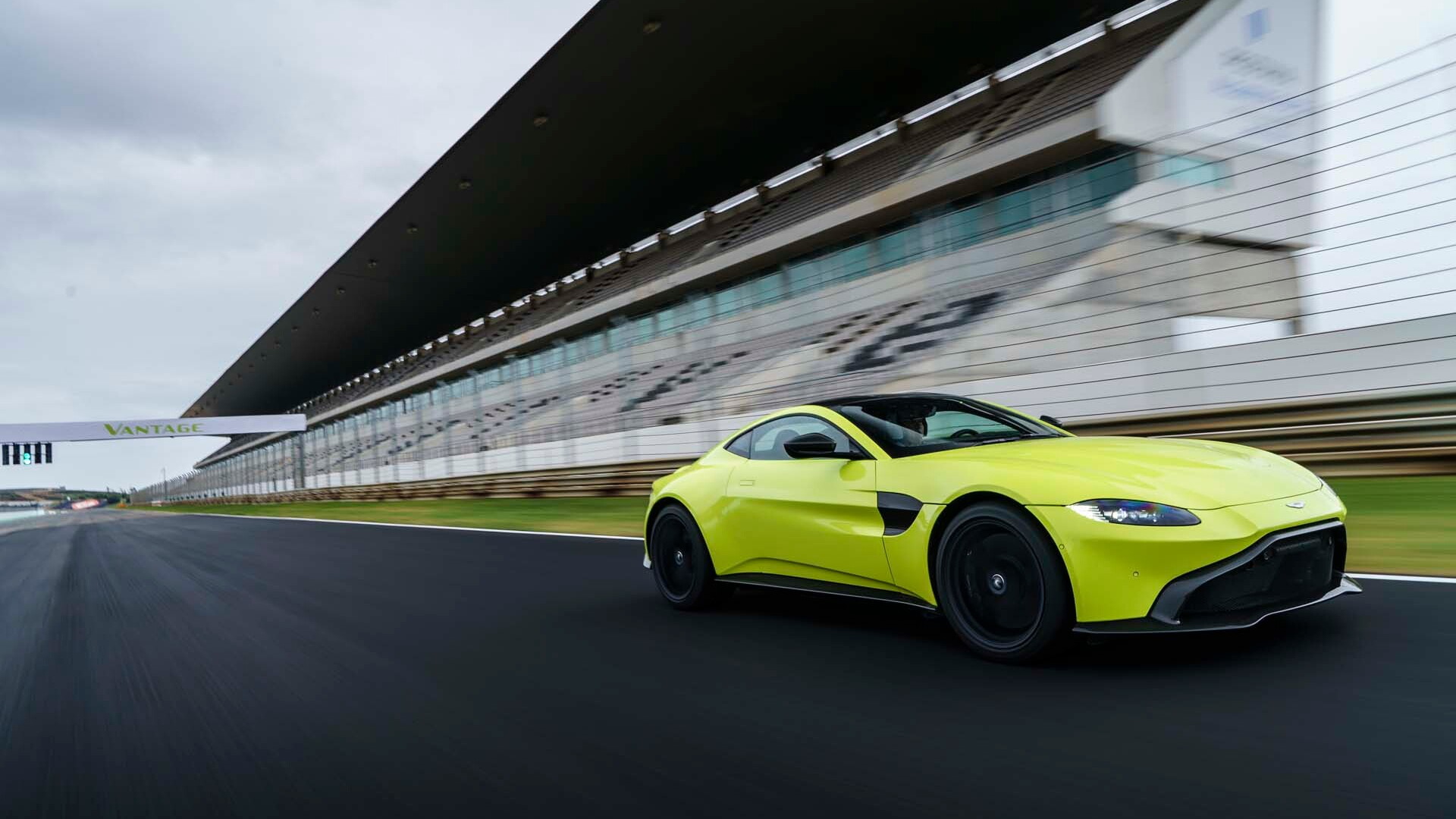 The giant blades on the lazy-looking wind turbines that dot southern Portugal produce the sound of a passing jet, only it never goes away. I know this because the irresistibly photogenic windmills got me out of the 2019 Aston Martin Vantage’s driver’s seat. Not much else would.

The Vantage’s avant garde styling is driven by aerodynamic demands almost as much as it is the need for a new persona for the brand. The front air intake and splitter not only manages airflow around and under the car but it is purposely ostentatious. It appears that Aston Martin is tilting at windmills.

When the goal is stability at a top speed of 195 mph, airflow management is crucial. Equally critical is the need for Aston Martin to graduate from the ranks of stodgy heritage brands and vault itself firmly into the future. The forthcoming Valkyrie hypercar, co-developed with the Red Bull Formula One team and designed by its aerodynamicist extraordinaire, Adrian Newey, will surely shift perception of Aston Martin forever.

But the $3 million Valkyrie will be available in vanishingly small numbers, fewer than 200 total between the street cars and track-only versions. Own one? You may never see one. The Vantage, on the other hand, is Aston’s best-selling model, with 21,500 examples of the outgoing generation produced. The aim is to get a bunch of these new $150,000 Vantages out on the streets where they will remind viewers of the Valkyrie, not of some fictional British movie spy’s musty old car.

“You have some very strong graphics,” explained Thomas Leret, color and trim design manager at Aston. “It is very three-dimensional, more intricate and complex than before,” he continued. “It gives a modern character to the car.” For a brand seeking to escape the amber in which it is in danger of becoming fossilized, this is critical.

He’s right. The aerodynamic-focused styling is more expressive, and the controversial bits sit very low on the car, where they aren’t as apparent when viewed from standing height, as opposed to the ground-level perspective beloved by photographers. The sloping hood looks very low, and by itself helps pull the Vantage out of the past.

The retina-searing Key Lime hue that appears as a main body color and as a highlight on more subdued cars was inspired by shoes and sports attire from Nike and Adidas, Leret reported. The aim is convey a lightweight, sporty impression.

That begs the question, is it lightweight? Lightness is relative in these days of small overlap and roof crush crash tests, but in its lightest available configuration the Vantage weighs in at 3,373 pounds. That compares to 3,153 pounds for the lightest Porsche 911 and 3,298 for the Chevrolet Corvette, so it could be lighter, but it’s in the ballpark.

Any additional mass is not apparent on the road, where the Vantage’s perfect 50/50 front/rear weight balance and its stupendously rigid aluminum chassis yield a sterling combination of excellent balance, road feel, and ride comfort.

The Vantage is Aston’s second model on the company’s new aluminum chassis, which is a substantial improvement over its first-generation aluminum VH platform. The Vantage’s chassis is 11 percent more torsionally rigid, at 35,000 newton-meters per degree of deflection, compared to 27,000 Nm/degree for the DB11.

This is partly because the Vantage is nearly a foot shorter than the DB11 (and 1.3 inches shorter than a 911), so there’s less to twist. But most of the improvement comes from the decision to follow racing fashion and bolt the rear suspension subframe directly to the chassis, without any cushiony rubber bushings in between to induce vague impressions of what the rear tires are up to when carving through a corner.

Matt Becker, chief of vehicle attribute engineering, promises that the change contributes to an easier ability to slide the Vantage’s rear end, because the solid mounting provides an unfiltered conduit for feedback. Becker joined Aston from Lotus, where he earned a reputation for producing peerless driver’s cars.

Testing in rain-slicked conditions at the Algarve International Circuit near Portimao, Portugal, where feedback from the tires was at a particular premium, I found the Vantage very manageable, though I'm happy to also credit the superb stability control software with assisting when I pressed a little too hard.

It isn’t just that solid platform that produces this manageable handling, however. The Vantage is carrying a hidden trick in its arsenal in the form of an electronic differential. The e-diff works by applying more power to the outer wheel to help push the car around corners. It can also lock and apply equal power to both rear wheels to boost high-speed straight-line stability.

That is helpful because the car’s shorter wheelbase yields agility at the cost of some stability. At 2.4 turns lock-to-lock, the steering rack is the same ratio as that in the DB11, which means the Vantage’s 13.09:1 steering ratio is effectively quicker due to its shorter wheelbase.

Both on the road and on the track, the Vantage is a lithe, agile performer that is responsive to both the driver’s inputs and to adjustments to its settings through the available driving modes. Track mode is ideal for smooth, dry tracks, but on the wet, bumpy surface of Algarve, Sport Plus proves to be more effective.

The Vantage’s engine sound is commendable because of its ability to burble quietly for highway drives or when pulling to the valet at the Ritz, and also provide a muscular V-8 rumble during spirited driving. Keep it in the Sport or Track modes and it pops and bangs during gear changes, which appeals to my inner race car driver.

However, unlike the Jaguar F-Type, there’s none of the contrived, over-the-top, she’s-faking-it feeling to the Vantage’s growl. That sound emits from the 503-horsepower twin-turbocharged 4.0-liter V8 engine Aston buys from Mercedes-AMG. We are already familiar with its surprising ability to sound like a naturally aspired engine in the Mercedes-AMG GT, despite the turbochargers’ impeller turbines obstructing the clear path for sound waves to travel from the combustion chamber to the ear.

That powerplant vaults the Vantage to 60 mph in 3.6 seconds as it sends power through a carbon-fiber driveshaft to the rear-mounted ZF 8-speed automatic transmission. No, it isn’t a dual-clutch automatic manual, which is fashionable in some circles. It doesn’t need to be, as the conventional planetary automatic executes shifts as rapidly as the driver can squeeze the steering column-mounted (in proper fashion, like Ferrari) aluminum shift paddles.

The engine works with the transmission, which works with the brakes and the suspension and the steering. It is a confidence-inspiring of-a-piece-feeling sports machine that does what the driver intends, with none of the confidence-sapping vagueness that plagued previous-generation VH platform Astons.

Aston Martin has not turned its back on its heritage of providing posh, leather-wrapped cockpits in its cars. The DB11’s extra length compared to the Vantage comes from that car’s inclusion of a mostly useless back seat.

With the Vantage, Aston drops the pretense and eliminates that “back seat” in favor of tidier proportions.

While the column-mounted shift paddles are superior to the steering wheel-mounted variety that are never where you left them if you want to shift while turning, regular shift duties are performed by console-mounted buttons that Aston unfortunately now regard as something of a signature item.

Traditional analog PRNDL shifters will always be easier to use, even if they intrude on space for the all-important cupholders. In the Vantage, Aston experiments with a new triangular layout of those buttons that the company insists make them more intuitive to use. It doesn’t. Buttons are still a bad idea.

Fortunately, after pressing the starter button and then the Drive button, there’s no need to fiddle with them further, leaving the opportunity to soak in the Vantage’s rich ambiance or to vigorously attack local twisties.

This is where the Vantage demonstrates a newfound (for Aston) level of agility and competence. The modern, capable chassis, the aero-forward styling, the utterly contemporary turbocharged AMG V-8 all break Aston cleanly free of the seemingly irresistible gravity of its heritage and propel the brand boldly into the future.

Yet the speeds I can achieve on these curvy roads are too low for the car’s sophisticated aerodynamic devices to play a meaningful role. Instead, I’ll appreciate its comfortable ride and handling prowess, and leave the aero work to the towering wind turbines in the background.

Aston Martin provided travel and lodging for the Internet Brands Automotive contributor to bring you this firsthand report.