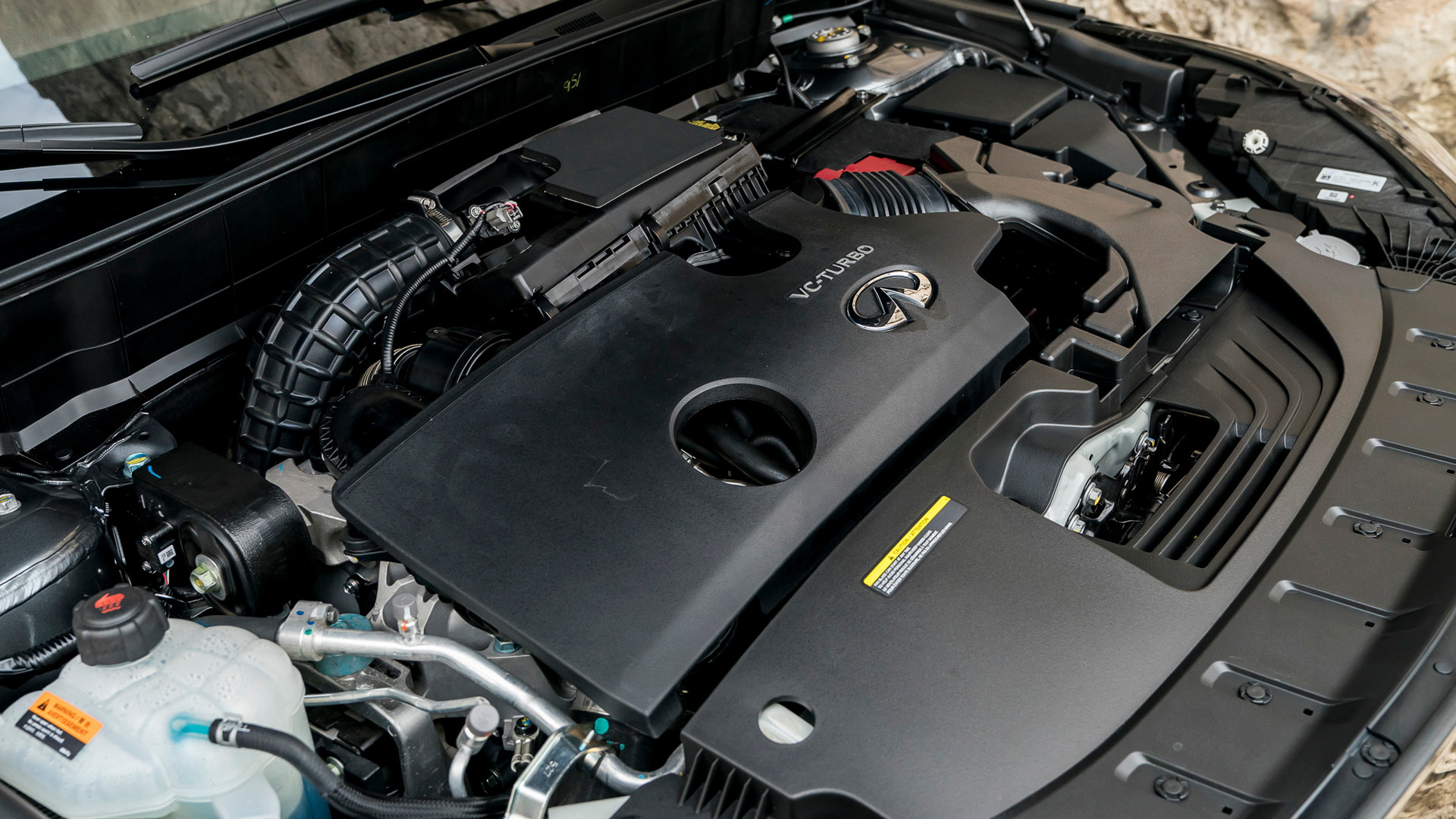 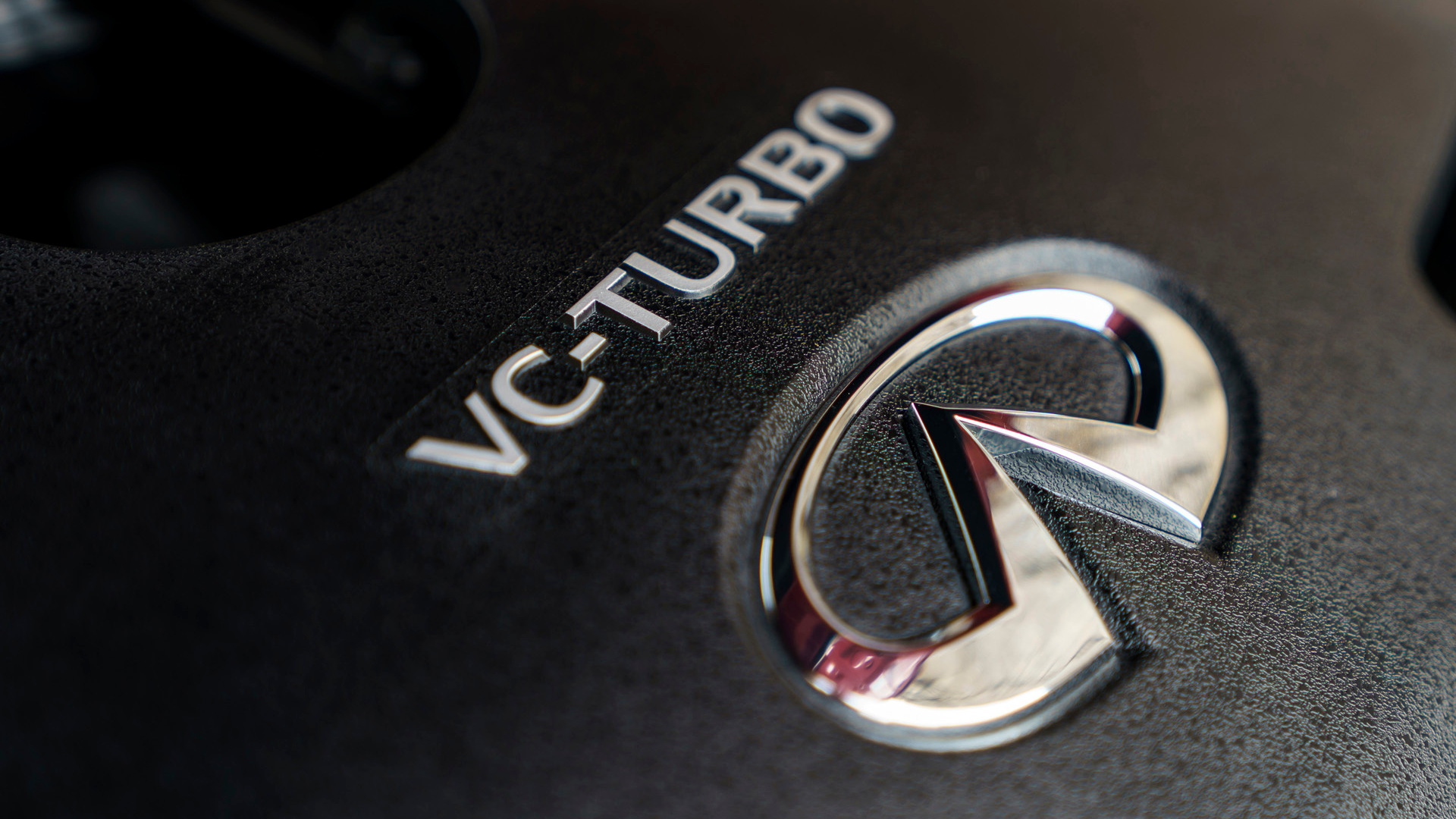 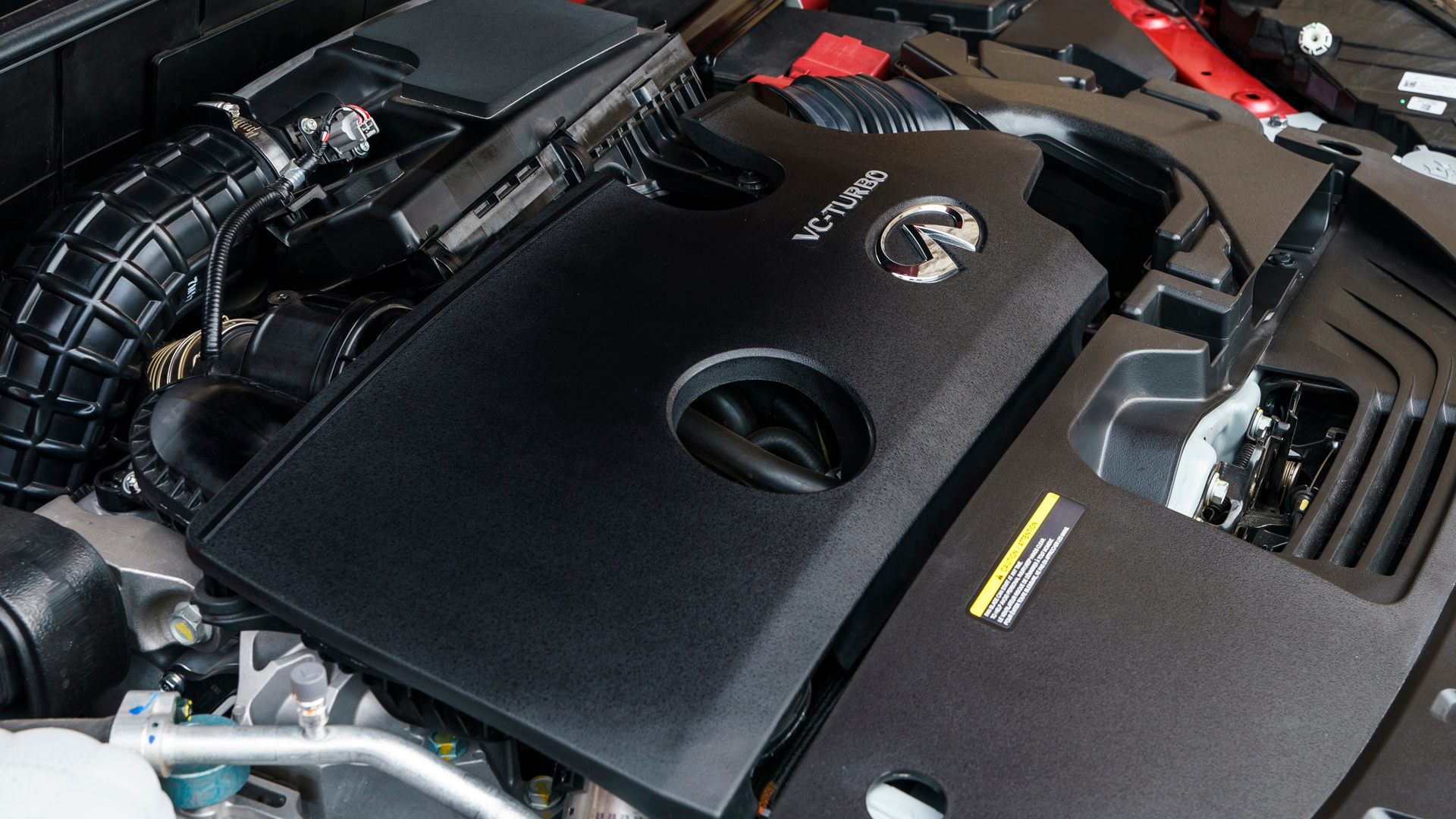 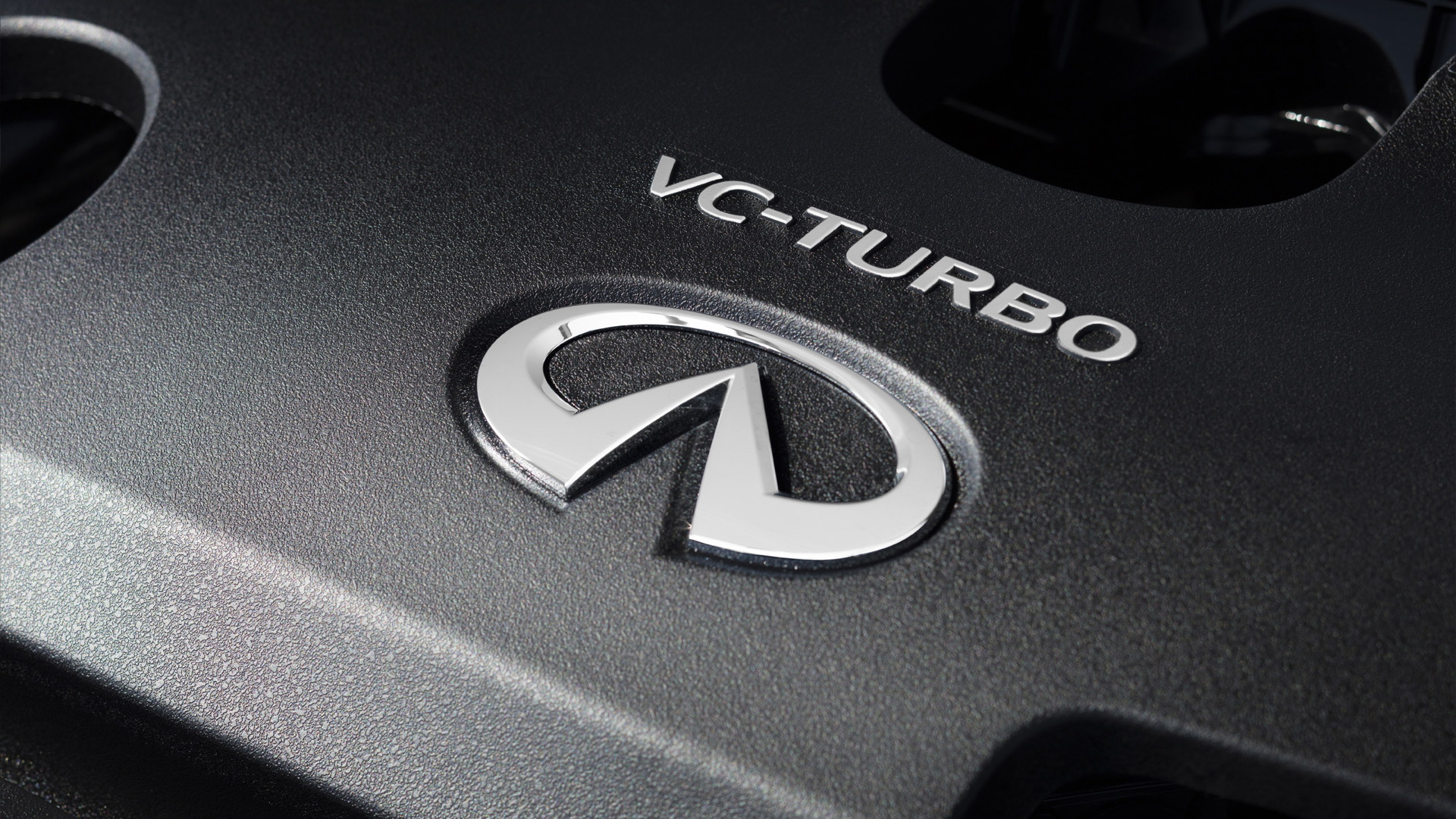 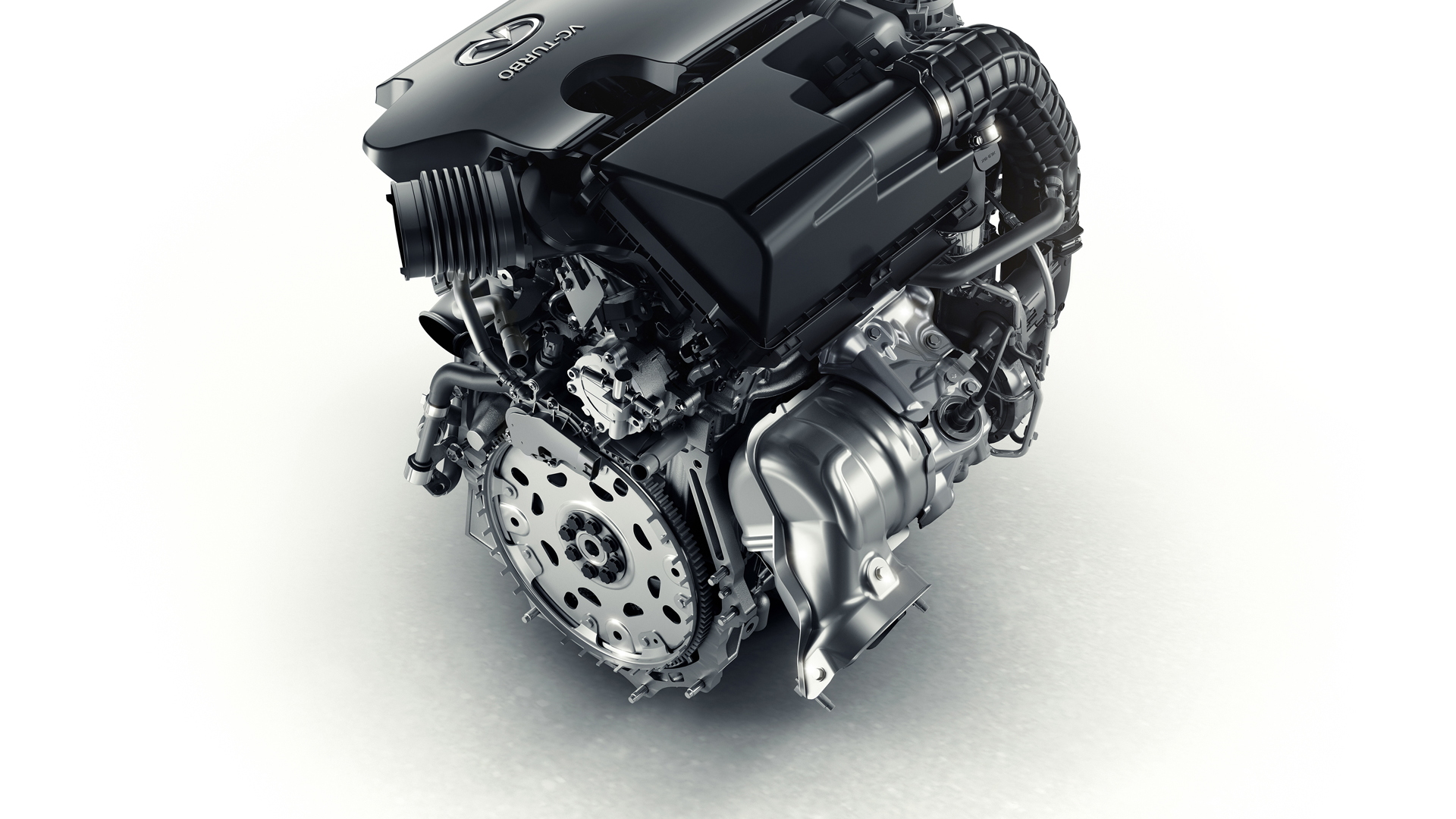 Infiniti introduced the world's first variable compression-ratio engine, a technology it claims to have been working on for two decades, at the 2017 Los Angeles Auto Show.

A variable compression-ratio engine is a feat of automotive engineering, flummoxing automakers since long before Infiniti showed its first car ever back at the 1989 Detroit Auto Show. The technology represents a fundamental rethink of how an engine operates.

An engine's compression ratio—what Day called the “DNA” of the engine—is a simple way of expressing the difference in a combustion chamber's volume between the bottom of the stroke (the bigger number) and the top of the stroke (the one).

Engines with these combustion ratios are not uncommon. The Toyota Prius operates a 13:1 ratio while the twin-turbocharged Mercedes-AMG E63S operates at 8.6:1. Infiniti's VC-Turbo straddles both—and the middle too—fluctuating between 8:1 and 14:1. Bouncing between those two ratios helps the VC-Turbo to an estimated 27 percent improvement in fuel economy over Infiniti's old 3.7-liter V-6-powered QX50 while boasting more torque.

“We've introduced a system within the engine that is unique to the industry, providing best-in-class fuel economy and acceleration,” Day told Motor Authority.

In a normal engine, a crankshaft spins around in the belly of the engine, raising and lowering the pistons across a fixed range—or stroke—and a never-changing compression ratio. But in the VC-Turbo, a 0.5-kilowatt electric motor powers the variable compression actuator (VCA)—the brain of the engine—on the side of the block and draws its information directly from the ECU. A hook-like actuator link ties the VCA to a non-rotating control shaft, while a control link attaches to the heart of the engine, the multilink.

Not much larger than an iPhone X, the trapezoidal multilink rotates with the crankshaft. As the ECU feeds information from the fly-by-wire throttle, the VCA adjusts the A-link, raising and lowering the control shaft, which in turn adjusts the angle of the multilink, effectively shortening or increasing the stroke. Nail the throttle and the ECU calls on maximum power from the VC-Turbo—the VCR moves the A-link, moving the control shaft and increasing the stroke. Lift off, and the opposite happens, as the control shaft drops and the stroke decreases. In other words, with a maximum/minimum stroke length—rather than a fixed stroke—this 2.0-liter, turbo-4 technically displaces anywhere from 1,970 to 1,997 cc.

The system is hard to notice. The result is a powerful, smooth, and charming engine that happens to have some cutting-edge engineering attached to it.

According to Day, the VC-Turbo is just as clean as a 2.0-liter turbo without variable compression. And despite the reworked internals, packaging the new engine under the QX50's hood isn't any more difficult.

“Internally, we're able to package it all within our current inline-4 engine itself,” Day said. “We're slapping an actuator on the side of the block that doesn't take up a lot of space and we're also removing balance shafts which are necessary for an inline, naturally aspirated engine that doesn't have this mechanism.”

“By using that real estate and putting in our linkage system, there's no packaging issue.”

That clever packaging and inherently smoother running helps with engine reliability, too. According to Day, owners shouldn't expect the VC-Turbo to be any less reliable than Infiniti's standard 4-cylinder turbo. In fact, it might even be more durable.

“We've done quite a bit of durability testing in different conditions,” Day said. “Yes, we're adding more parts, but we're reducing friction, which is part of why we're able to get better fuel economy.”

That reduction in friction, Day said, is thanks to the angles of the connecting rods—the VC-Turbo's linking rods don't move nearly as much the connecting rods in a traditional engine, which means less sideways force acting on the piston wall with each revolution. That also means service intervals are unchanged.

But while VC-Turbo sounds fantastic on paper—and based on our first drive, is quite nice on the road—a final verdict is some time off. Automakers regularly introduce fuel-saving features, but real-world benefits take time. Until Infiniti's new 2.0-liter VC-Turbo gets into the hands of consumers, most of the engine’s promise is on paper.