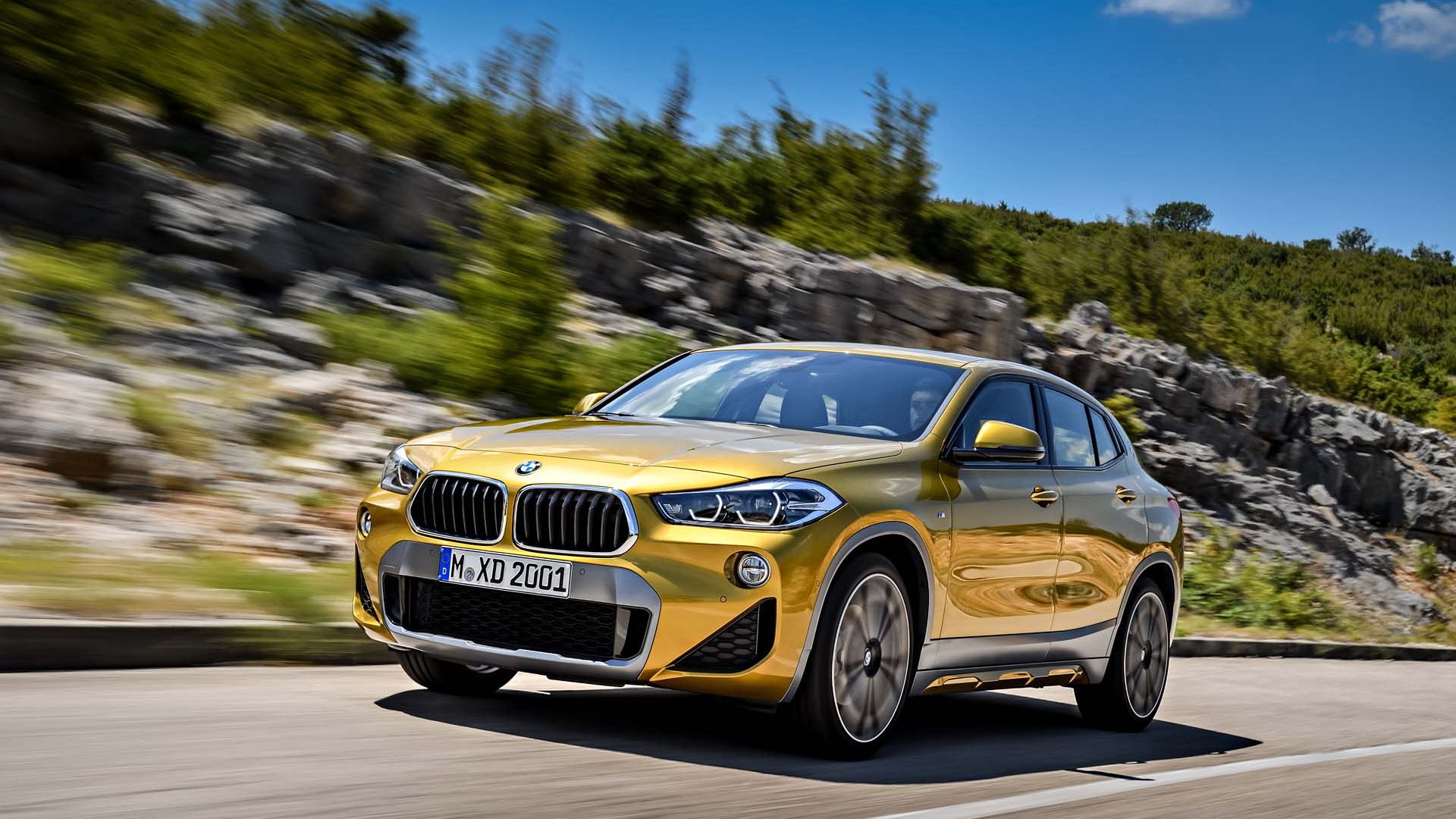 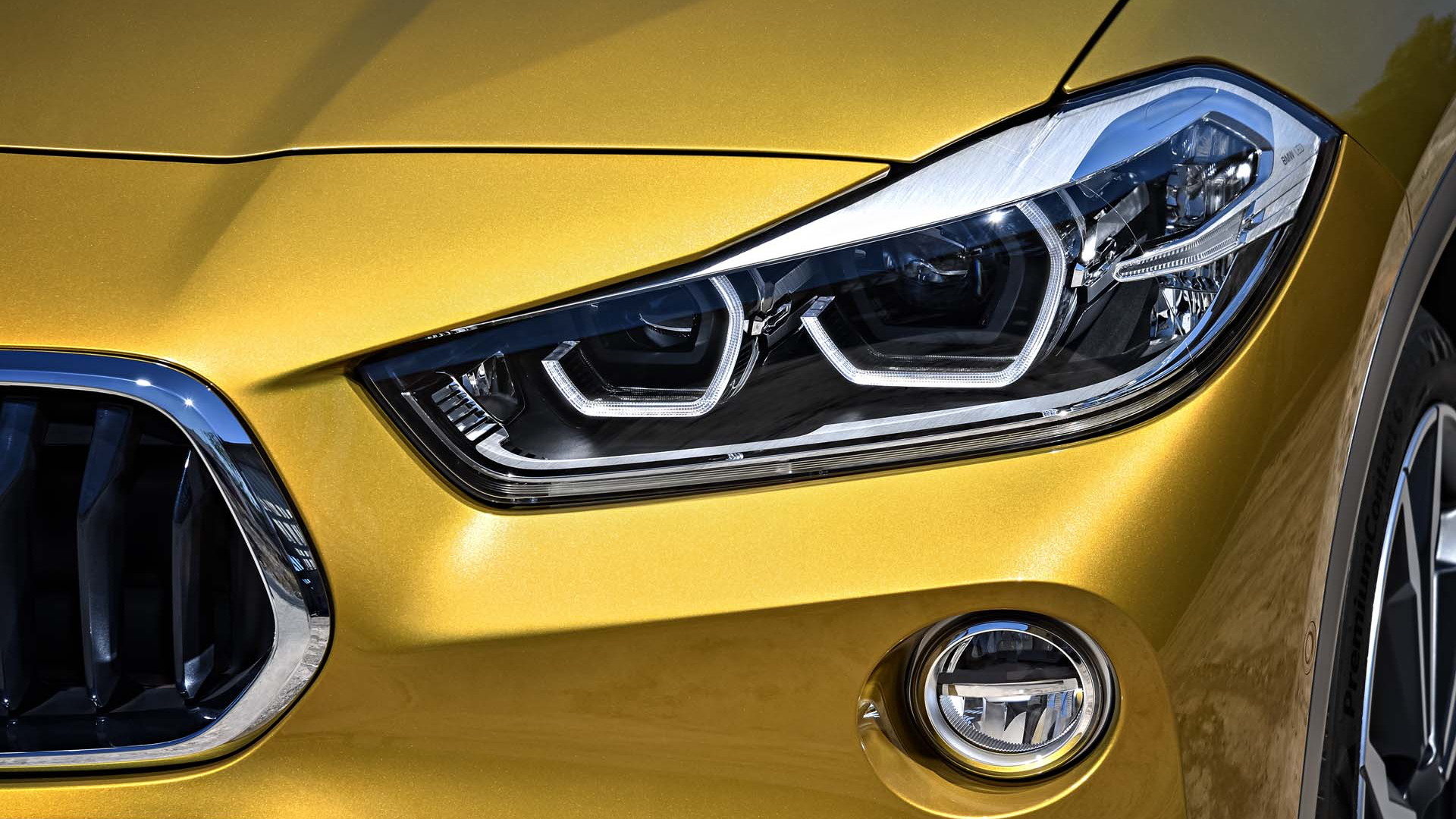 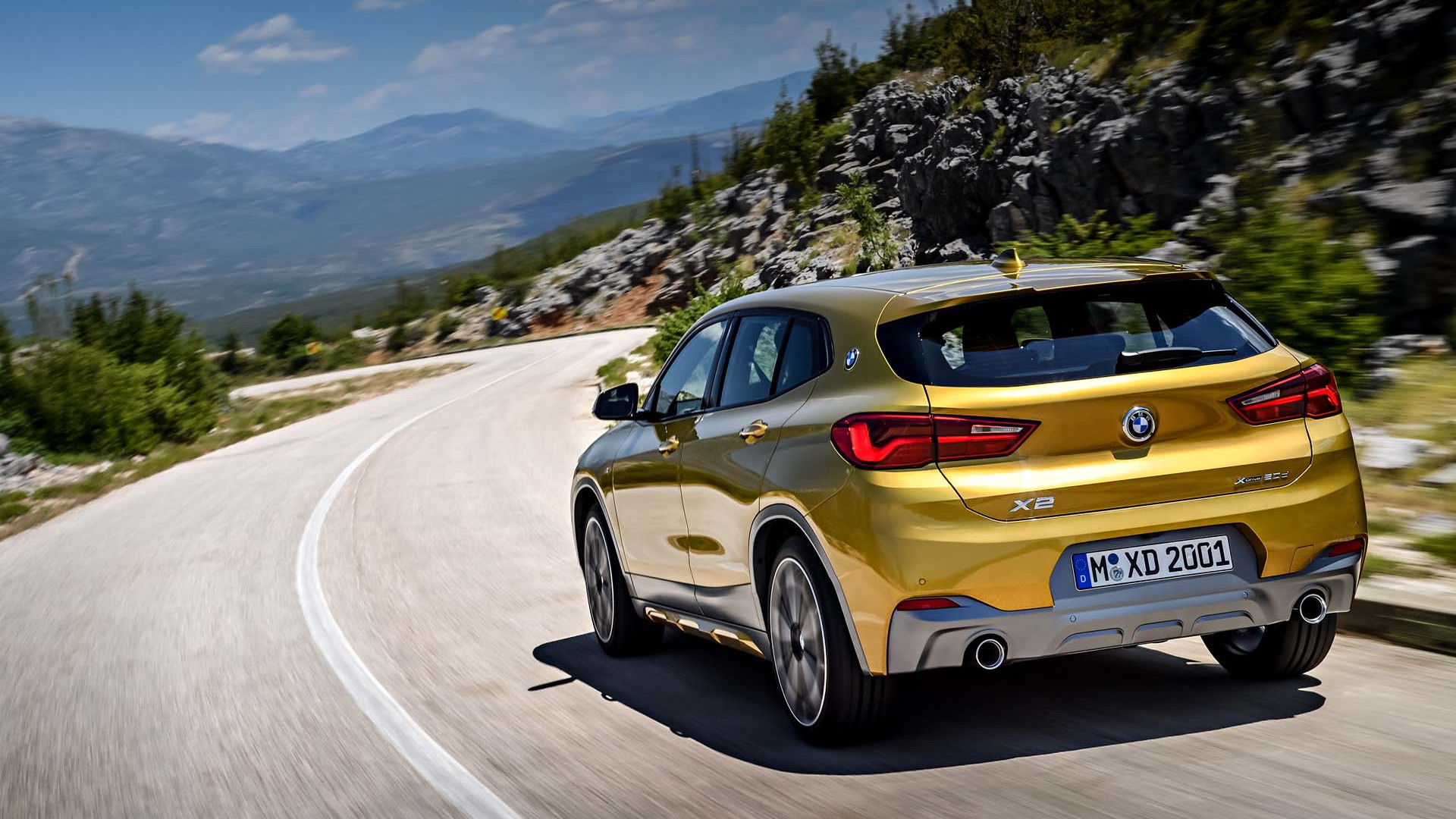 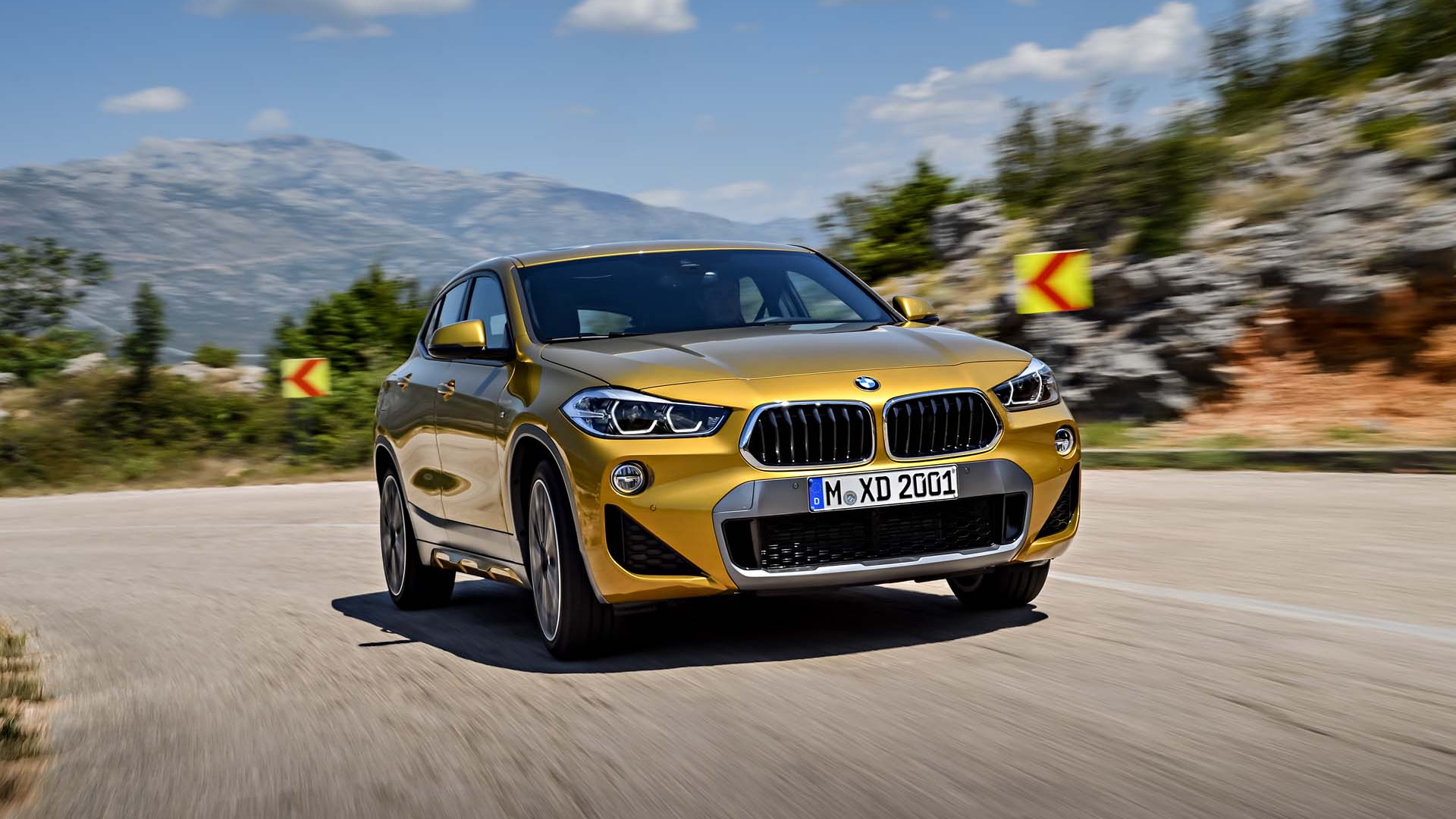 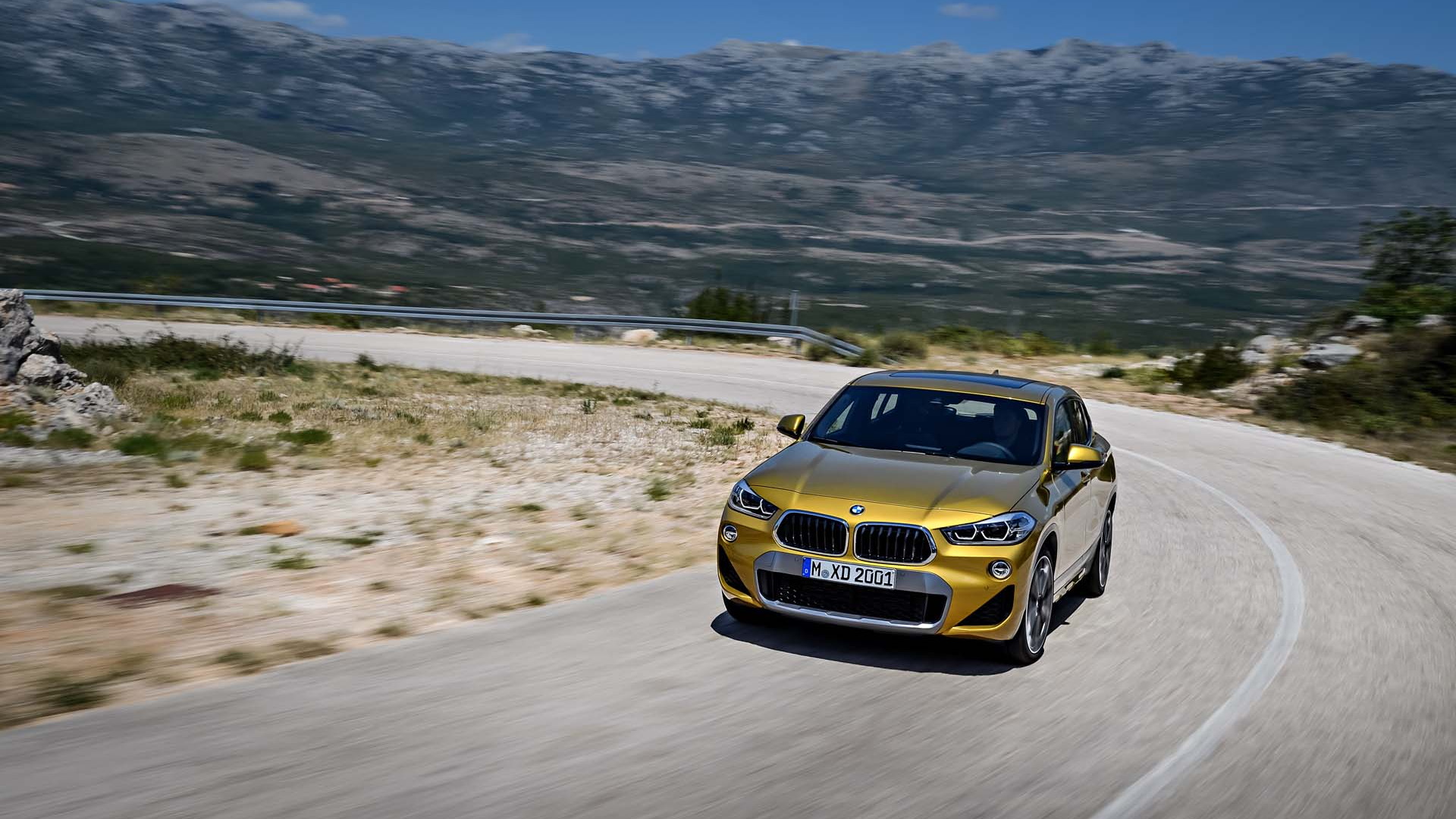 Not content with a numerical gap between X1 and X3, on Wednesday we finally saw the 2018 BMW X2 crossover placeholder we knew was coming. The BMW X2 continues the automaker's march toward all things crossover, with no niche unturned.

Based on the BMW X1, the new X2 hatchback chops a few inches off the rear bumper, roof line, and adds a few more roundels on the rear roof pillars. The X2 will be initially powered by a 2.0-liter turbo-4 that makes 228 horsepower and 258 pound-feet and will scoot up to 60 mph in 6.3 seconds, according to the automaker. An 8-speed automatic and all-wheel drive are standard on all models for next year. Other countries will get other options—including the diesel-powered version seen above and a manual transmission—but shoppers in the U.S. will get the X2 xDrive28i relatively monospec for now.

It's possible that the pocket-sized BMW will likely have more powertrains in the future, considering its close relationship to the Mini Countryman and BMW 2 Series Active Tourer that's sold overseas, which offer plug-in hybrid variant and 3-cylinder engines under their hoods.

One step above the base X2 is the X2 M Sport X version that offers a different visual take, albeit with nearly identical performance as the base version. M Sport X models receive a odd trapezoidal metallic lipstick slathered around its lower front fascia, available 20-inch wheels with summer rubber, and optional exterior colors including the gold you see above. The M Sport X's available sports suspension lowers the car a further 0.4 inches, and adds paddle shifters along with a sport program for its transmission. A higher-powered X2 M35i is reportedly in the works for later next year.

From head to toe, the X2 measures 172.2 inches, which is 3.2 inches shorter than the X1 despite having the same wheelbase. Like the X1, the X2 will prioritize driving the front wheels first, with a multi-plate clutch sending power to the rear in 250 milliseconds, according to BMW.

The new X2 gets a bevy of interior tech, including BMW's latest infotainment system and cloud services, dubbed iDrive. A 6.5-inch display screen is standard, upgradeable to a 6.5-inch touchscreen or 8.8-inch touchscreen, the latter being a virtual IMAX screen in the small cabin.

The X2 asks for some sacrifices for its faster roof line and chunkier roof pillars. With the seats up, cargo space from the X1's 27.1 cubic feet is trimmed to 21.6 cubic feet in the X2. Two inches of head room in the rear seat has been cleaved in the X1 as well, and leg room is down a fraction of an inch in the X2's second row.

Despite the X2's low-rolling resistance tires and standard 18-inch wheel combo that's upgradeable to 19- or even 20-inchers, the X2 includes standard hill descent control on every model.

Its likely stomping grounds will be where the Mercedes-Benz GLA and Range Rover Evoque already roam. Although the X1 is a taller-riding wagon, the X2 may give BMW a sportier pick to rival those models in style and performance.