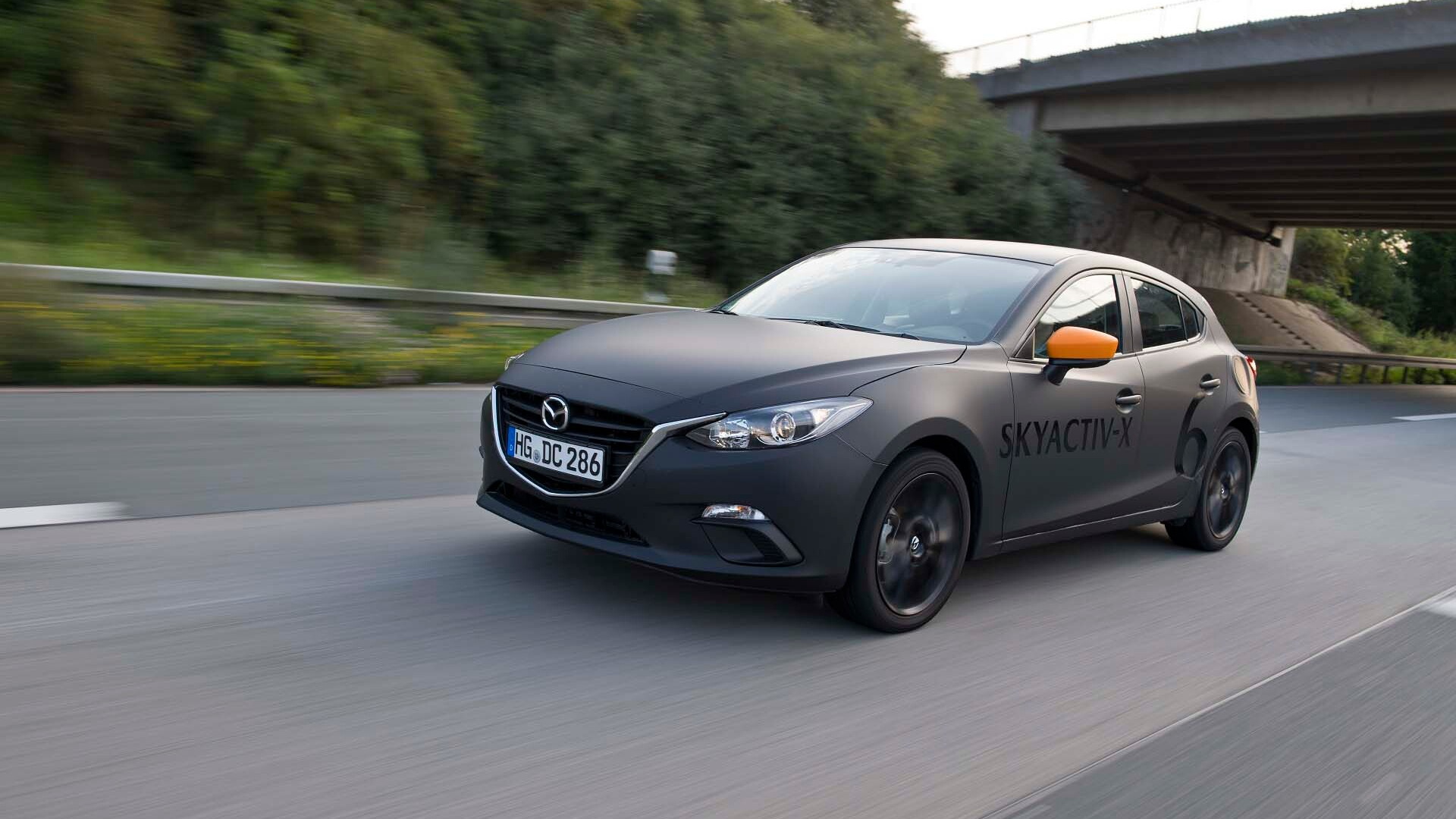 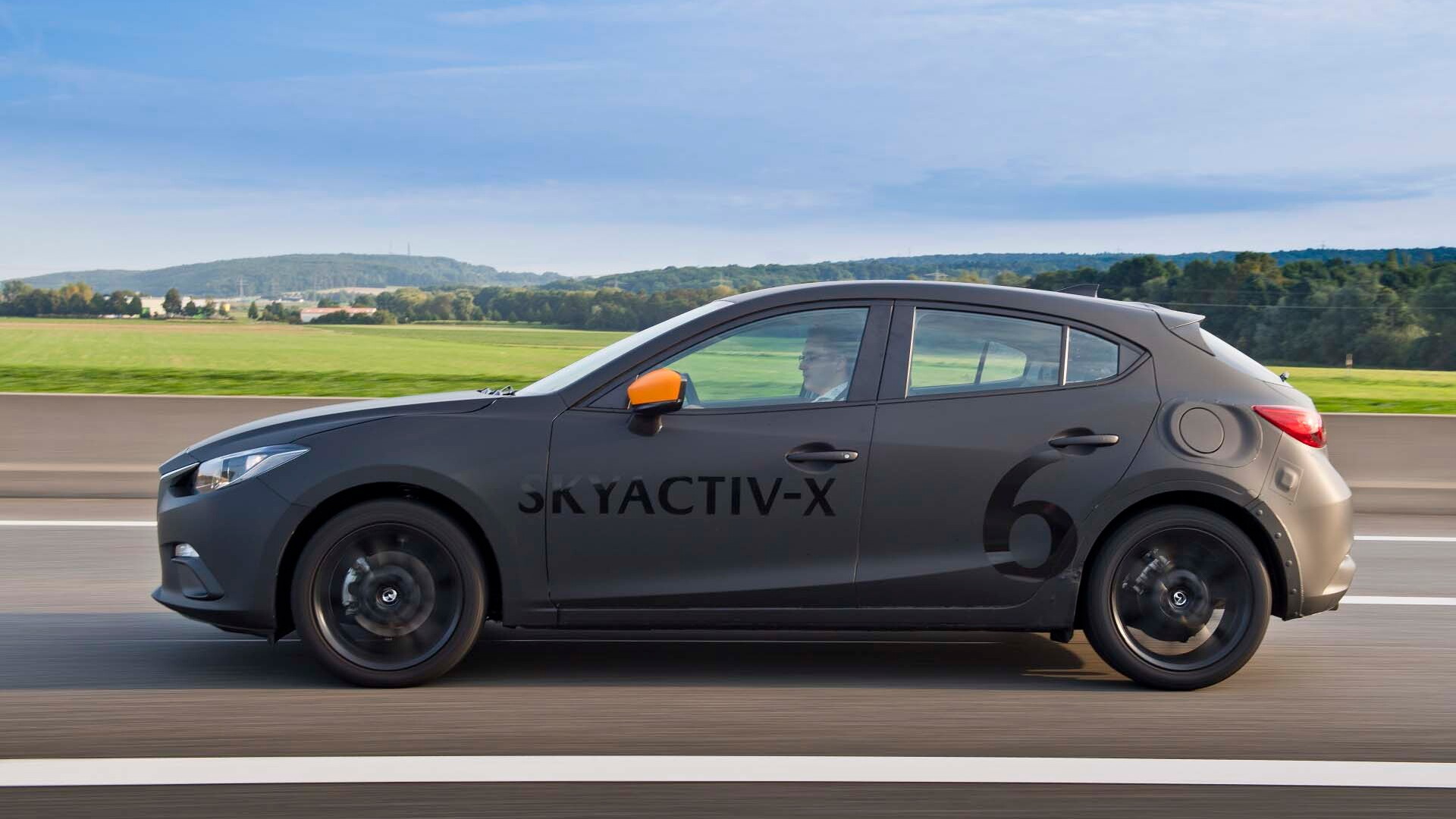 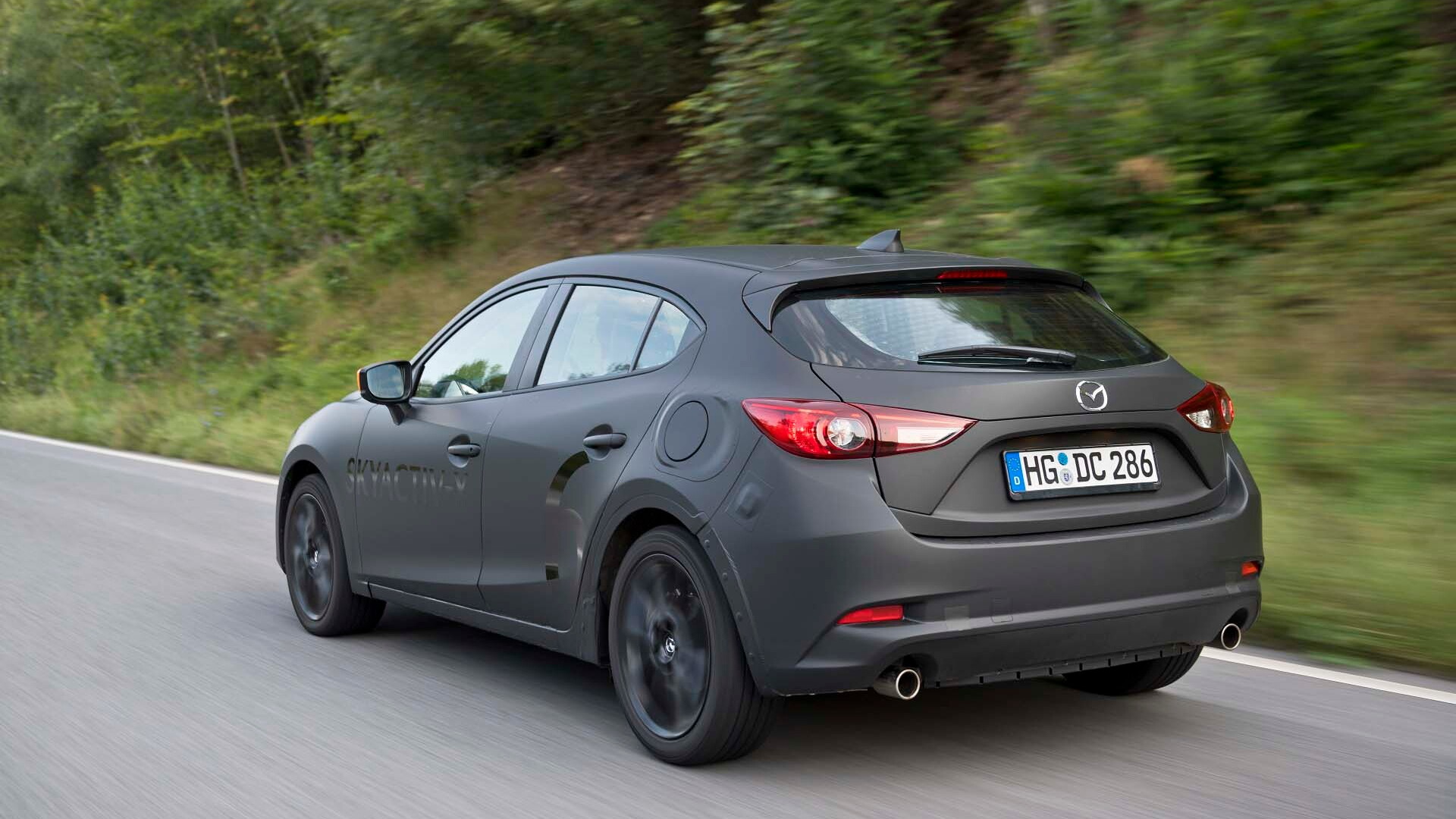 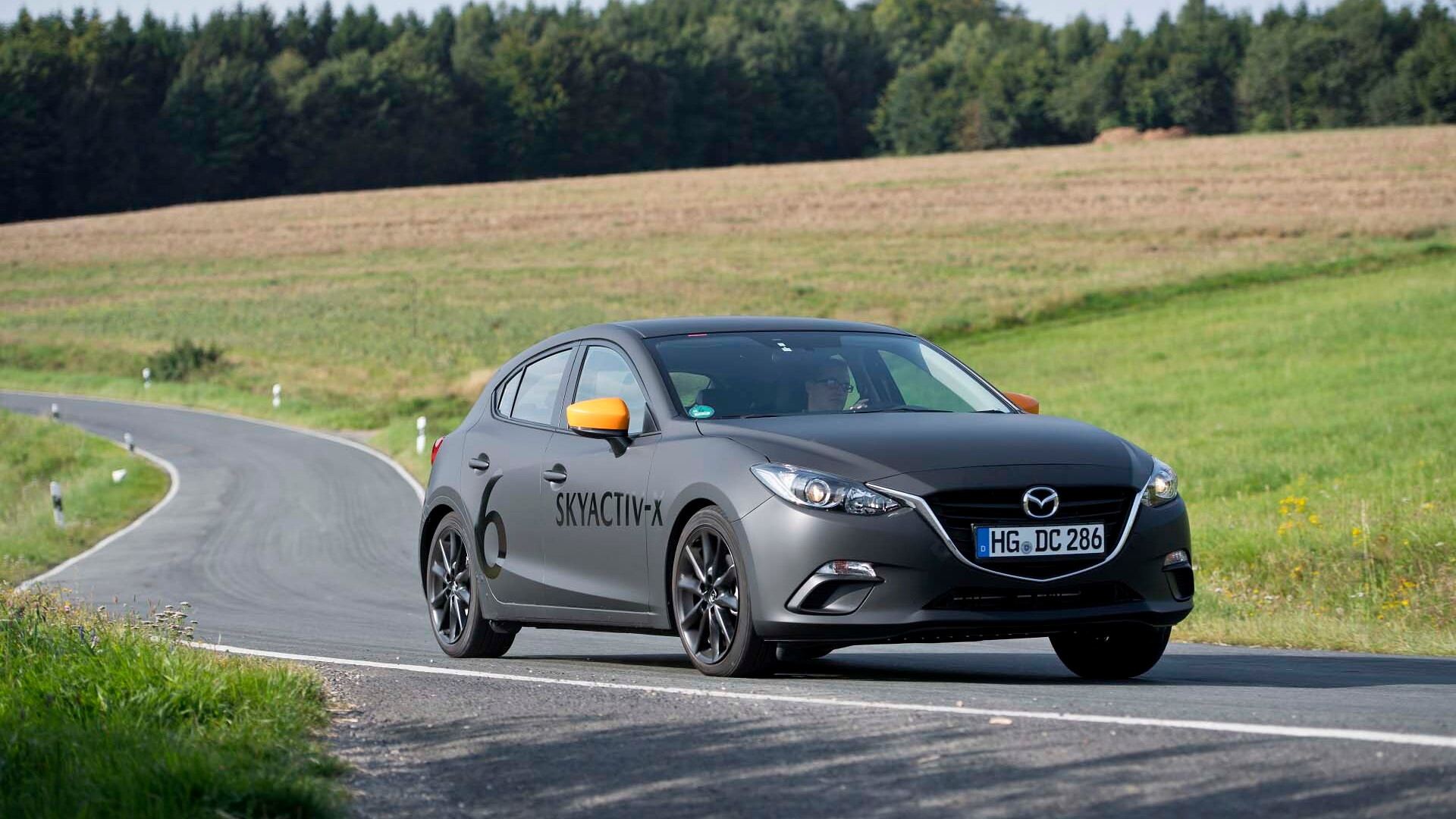 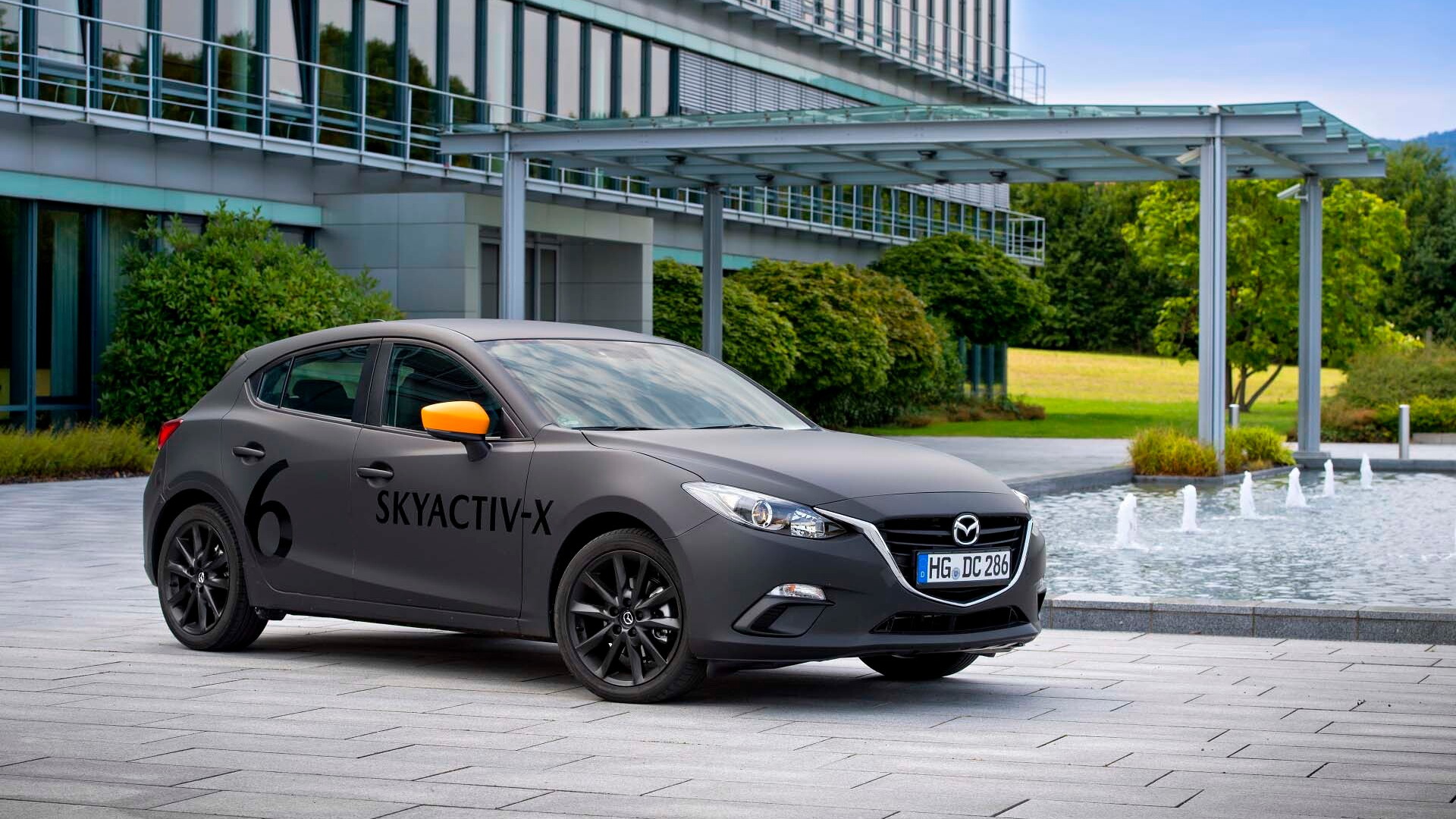 In late August, exactly six next-generation 2020 Mazda 3 hatchbacks existed anywhere in the world. Each was a hand-built prototype, riding on a next-generation chassis and powered by a radical new 2.0-liter engine. We'll take two.

But the car’s styling and design haven’t been revealed—and won’t be until 2019—so the new chassis and powertrain are topped with most of the body shell and interior of today’s Mazda 3 for real-world testing.

READ MORE: Could HCCI be the future of the internal combustion engine?

The six cars bore the signs of engineering prototypes: flat-black body wrap, bolts holding parts of the bodywork on, a re-engineered gas door in an inset metal panel. Only differently colored door mirrors and a large number on the door distinguished them from each other.

Under the hood, a large black plastic engine shroud hides the engine itself, which we saw in static displays. But plenty of underhood zip ties, holding in place the hand-built wiring and plumbing, showed the cars’ developmental status.

The 2.0-liter engine that will arrive for 2020 has been dubbed SkyActiv-X, and it represents a radical leap forward in efficiency over its predecessor.

Mazda, in fact, is on the verge of putting into production an engine that uses the principle of homogeneous charge compression ignition, or HCCI, which has been a holy grail for engine designers for decades.

Mazda’s new 2.0-liter engine is an evolution of the SkyActiv-G inline-4s it began to offer in 2012 models. Using the highest compression ratio of any gasoline engine on the market, at 14 to 1, that engine burned a leaner air-fuel mixture and consumed roughly 20 percent less fuel than engines of similar power from other makers.

The "X" version of SkyActiv takes the next step, raising the compression ratio to "15- or 16-to-1," close to high enough to permit a lean gasoline-air mixture to combust under compression alone.

Mazda took a different path entirely. It calls its technology Spark-Controlled Combustion Ignition. The innovation is to ignite a very small amount of gas-air mixture that is injected very close to the spark. This in turn raises the pressure on the much larger volume of lean gas-air mixture in the rest of the combustion chamber, creating an effective compression ratio high enough to cause that mixture to spontaneously ignite.

In other words, Mazda has figured out a way to boost pressure enough to achieve HCCI without mechanical means.

While the SkyActiv 2.0-liter engine block is strengthened somewhat, only three components were entirely new. First, a high-pressure fuel system injects fuel into cylinders with higher compression ratios. Second, a "high-response air supply" powered by a compressor—Mazda insists it not be called a supercharger—increases the volume of air to make much leaner mixtures.

Finally, the very latest generation of in-cylinder sensors plus the most powerful central-processing units Mazda has ever used on an engine allow each individual combustion event in each cylinder to be monitored, allowing the next cylinder's mixture and operation to be adjusted as necessary.

Considering these were development engines that won't launch for another two years, the prototypes we drove were remarkably composed. A few inconsistencies in response and rough transitions clearly require more mapping, but the engine felt stronger than current 2.0-liter SkyActiv-G models and well matched to the six-speed manual gearbox and six-speed automatic transmission in the two test cars we drove.

And that 2020 Mazda 3 chassis promises to be fun to drive. The company has developed entirely new seat frames to support the body in ways that allow the vehicle's feedback to be most directly received by the driver. And the position of the seat, steering wheel, and pedals have been chosen to center the driver in an optimal position, eliminating the slight off-center position found in less driver-oriented vehicles.

The results are encouraging: on a drive route that included a short stretch of unlimited-speed autobahn, meaning speeds of roughly 100 mph, the prototype 2020 Mazda 3 delivered 34.6 mpg and 39.9 mpg in manual and automatic versions, respectively.

More than that, while it's a thudding cliche, the car cornered as if it were on rails and delivered feedback and feel through the power steering sufficient to disguise its electric operation and the resulting simulated feedback.

We'll hear more about the SkyActiv-X engine in the years to come, along with a revision of today's SkyActiv-G engine that adds cylinder deactivation.

Mazda hasn't yet revealed which vehicles will get the new engine, nor how it will be positioned within the lineup in any given model.

Two things became clear from the drive: Mazda remains as committed as ever to making mass-market cars that are rewarding to drive, and it believes the internal combustion engine has a long future ahead of it, using far less fuel than today.