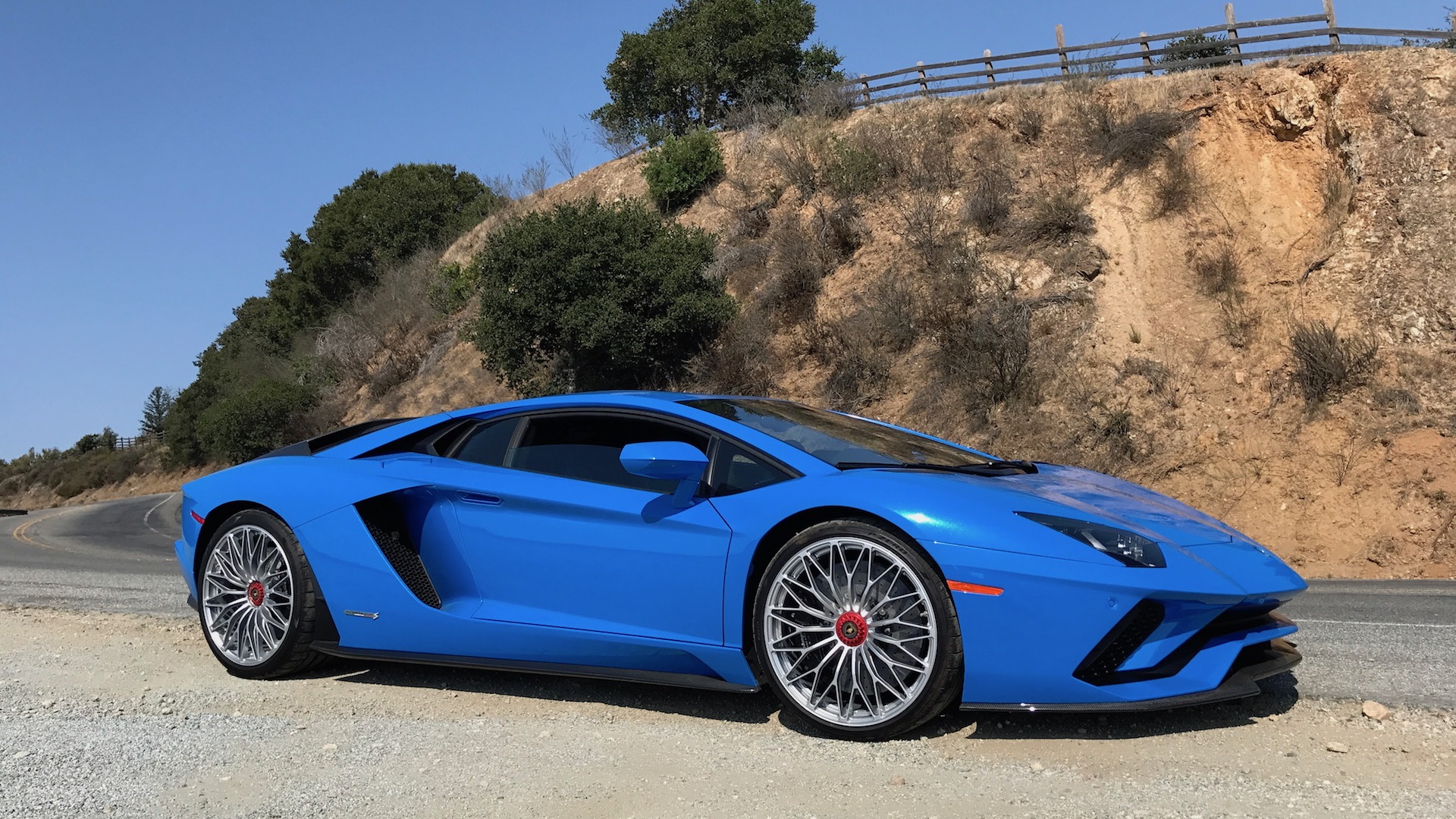 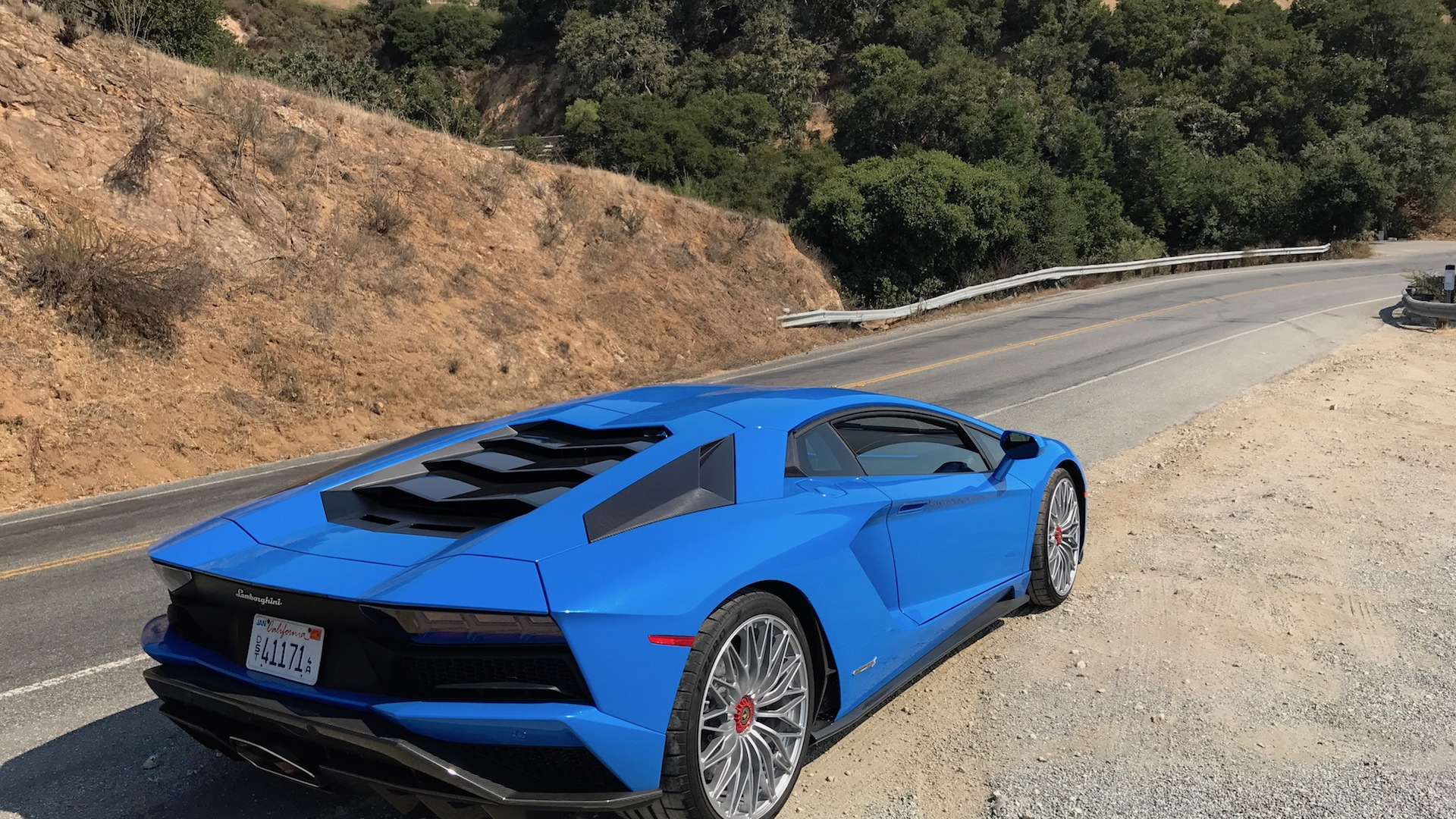 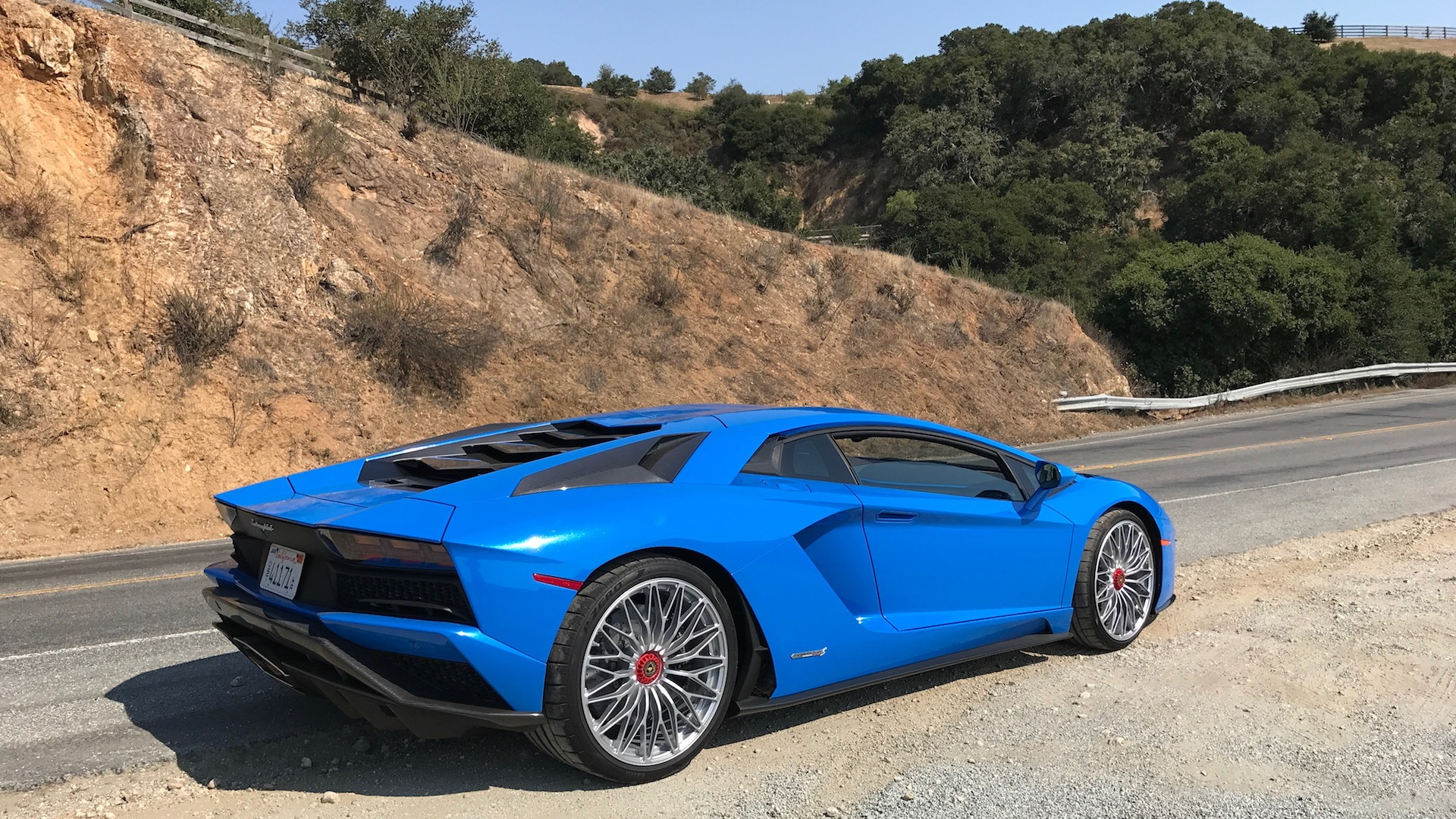 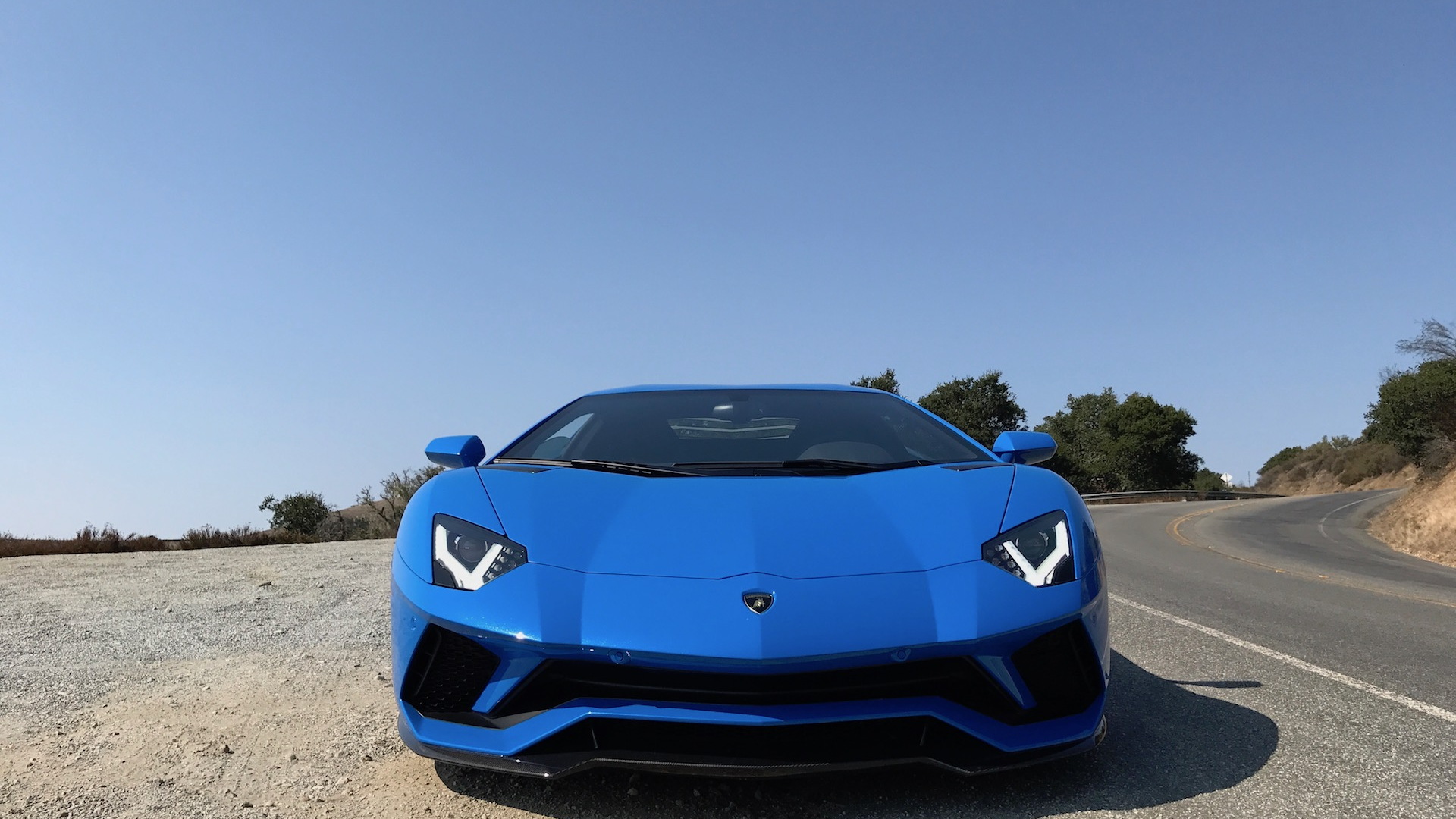 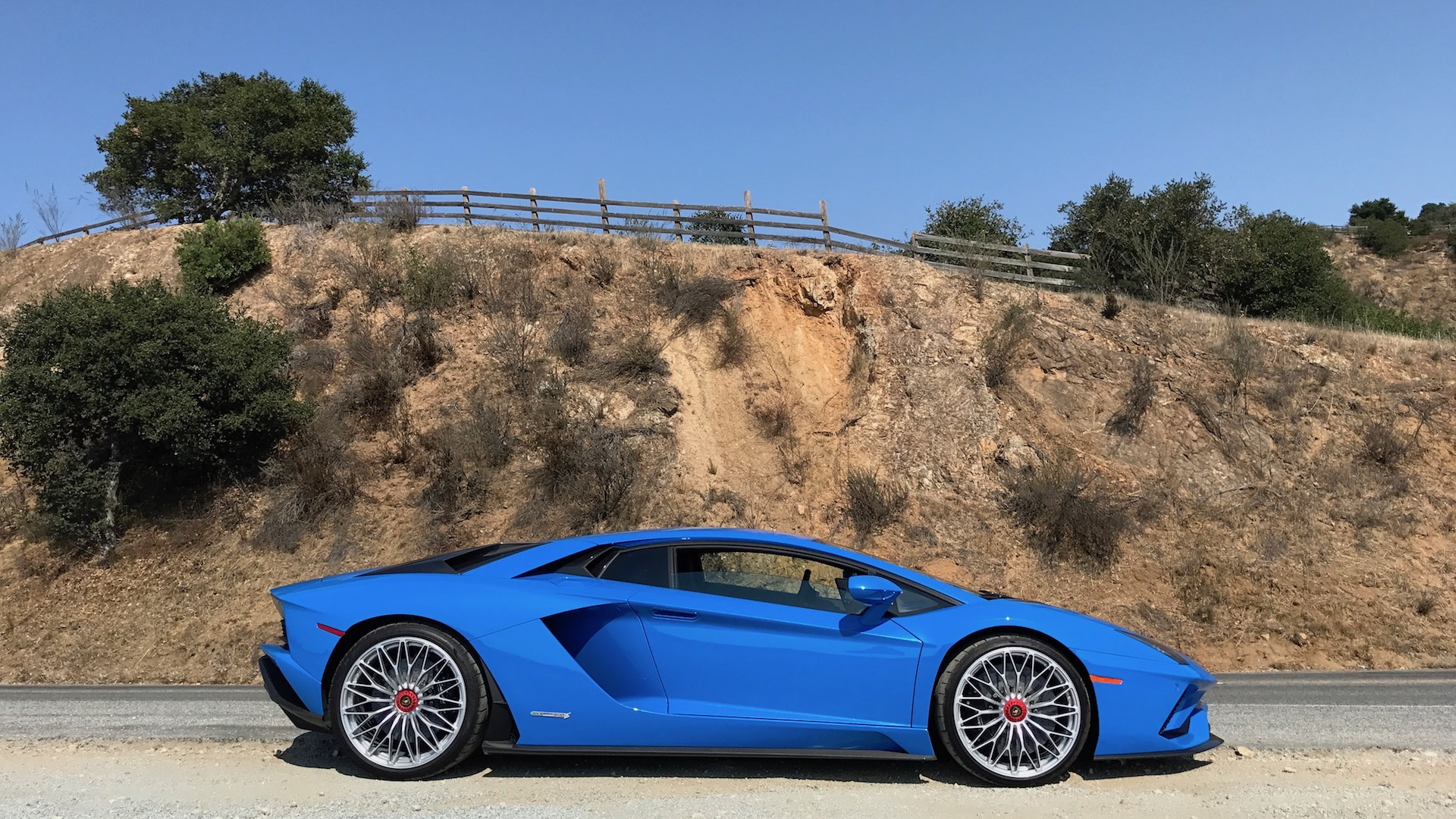 Anyone who has been to Monterey Car Week in general and The Quail, A Motorsports Gathering, specifically, know that the whole affair creates a special kind of congestion caused by automotive exotica of all sorts. You might see a string of Rolls-Royces, or vintage Ferraris, or Koenigseggs, or VW Microbuses, or any a mix of exotics and classics. It's confusing to be annoyed by not moving but thrilled by just about every car you see.

Toward the end of this year's event at The Quail, I was scheduled to drive the 2017 Lamborghini Aventador S from Lambo's outpost at the event. The time slot didn't bode well for traffic, but I thought I had a plan to combat it and find some open road.

The Aventador S is the next evolution of the Aventador, which made its debut as a 2012 model. The 6.5-liter V-12 gets changes to valve timing and an exhaust system that is 20 percent lighter. Output increases from 691 to 730 horsepower, while torque stays the same at 509 pound-feet with a flatter torque curve. Redline also increases from 8,350 to 8,500 rpm. The Independent Shifting Rod (ISR) transmission, a 7-speed single-clutch automated manual, also gets different programming that promises to smooth out some of its problematic shifts.

From a handling standpoint, the most important addition is rear-wheel steering. The system can turn the wheels 3 degrees opposite of the fronts at low speeds to effectively shorten the wheelbase by as much as 19.7 inches or 1.5 degrees in tune with the fronts at higher speeds to lengthen the virtual wheelbase by 28.6 inches and therefore improve stability.

The chassis also gets magnetic dampers and a tailored set of Pirelli P Zero tires that Lamborghini says have been designed for higher lateral acceleration and reduced understeer.

The car's aerodynamics have also been updated. The front splitter is revised to improve airflow around the sides of the car and underneath it, and the active rear wing now has three positions. Lamborghini says front downforce has been improved by more than 130 percent over the standard Aventador. That adjustable rear wing improves rear downforce 50 percent in its up position and reduces drag by 400 percent in its down position. That'll let the car go faster around corners and in a straight line. With my street drive, I would not be testing the car's aerodynamic performance.

Lamborghini made a final change that is oh so Italian. In addition to the Strada, Sport, and Corsa modes that adjust the engine, transmission, all-wheel-drive system, steering, and suspension, Lambo added a new mode that allows the driver to choose individual settings for each system. Instead of calling it Individual like most automakers, Lambo calls it Ego in the U.S. or Egoist in Italy.

45 minutes in the Aventador S

My time in the Aventador S was limited to 45 minutes, so I was hoping to make the most of it. I met with Lamborghini representatives at their booth at The Quail, spoke for a few minutes with R&D director Maurizio Reggiani, then headed over to get the keys to the car that would be mine for the next few precious minutes. A scan of the sticker showed that the base price was a mere $424,835 (including the $3,700 gas guzzler tax and $3,495 delivery fee), but this car had nearly $100,000 in options, bringing the total to $522,115. Among the highlights of those extras were $5,300 for the Blu Nila paint, $19,200 for the lower carbon fiber package, $12,820 for a full interior carbon fiber package, $6,700 for more exterior details in carbon fiber, $4,900 for the 20- and 21-inch Dianthus forged aluminum wheels, and $4,200 for the Lamborghini sound system. You could buy a Porsche 911 Carrera with the price of the options.

I jumped in the car and quickly familiarized myself with the controls, including the drive selector and the settings for the Ego mode. I figured Strada (street) mode would work best for slow-moving traffic and Sport and Corsa would be more appropriate if I could find a place where the road opened up into a twisty playland. I could only hope.

The plan was to turn right on Carmel Valley Road, thereby going in the opposite direction of traffic, which would be heading back toward Monterey, then take a left on twisty Laureles Grade.

So much for plans. 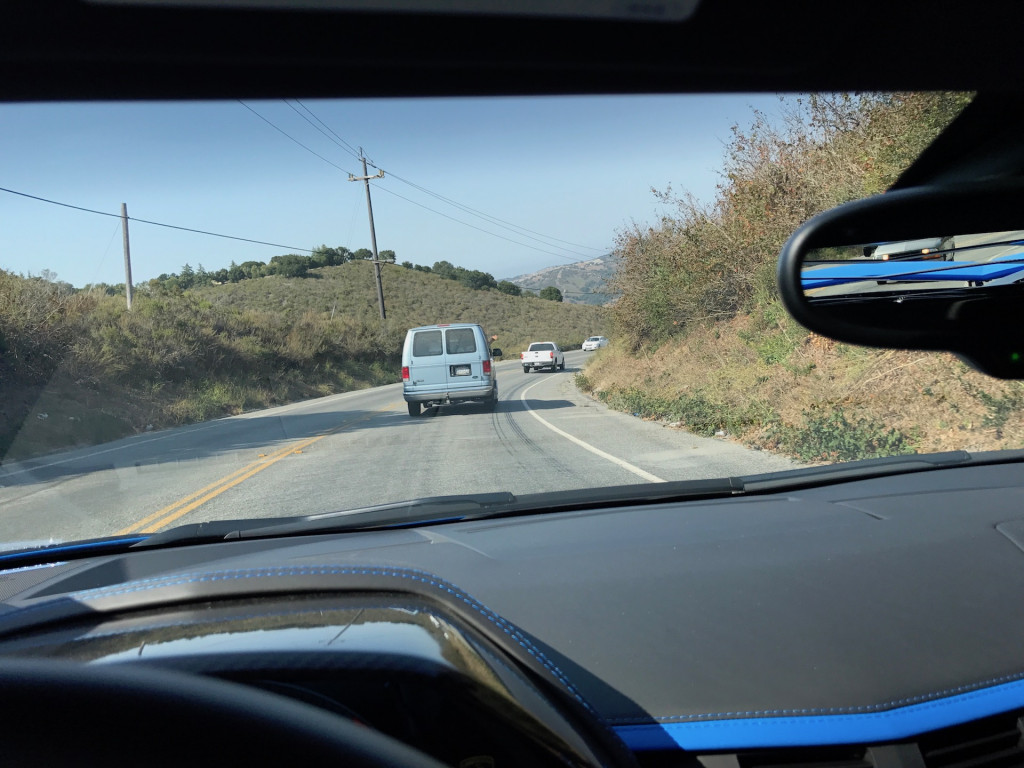 Carmel Valley was busy, and when I signaled to turn onto Laureles Grade I had to wait for about 15 cars to make the turn first, then got stuck behind a Ford Econoline van. I followed along at a snail's pace, flipping from Strada to Corsa to hear the wicked snaps and crackles of the overrun sound. The V-12 sounds like it's chewing up a box of rocks as you let off the throttle in traffic, which I had to do all too often. I did notice, however, that the ride is surprisingly forgiving for a supercar, especially in Strada mode. Credit those magnetorheological dampers.

I ran for awhile on Laureles until I came to a dead stop. Then I turned around and headed back. Along the way, I spotted a little side street called Hidden Hills Road. I took a right onto this twisty little bit of freedom and finally got a chance to feel what the Aventador S can do in a corner. With the dial planted in Corsa mode, I attacked the tight corners as fast as I dared, and found the Aventador shrunk to fit the road. That rear steering did indeed shorten the wheelbase. It felt stable and planted, though I didn't dare try to find the limits of grip in such tight quarters.

On my way back up Hidden Hills, I paid attention to acceleration (sudden and overwhelming) and the shifts (quick and crisp, but with a disarming pause).

An extra 30 minutes in the Aventador S

Those shifts soon turned to slushy and distracting as I made my way back onto Carmel Valley Road. With just a few minutes left in my drive. I needed to get back, but a traffic jam left me sitting in traffic for a half hour with Lambo HQ just a couple miles away.

The Aventador's single-clutch automated manual is a thing of the past and for good reason. Drivers don't anticipate the pause between shifts and they become quite annoying. Not only that, but when traffic stopped the transmission decided to go into neutral and I had to shift back into Drive to get going again. I was worried that the Lamborghini folks would be mad that I took their car too long, but there was nothing I could do but wait. My only solace? Dialing up Corsa mode, goosing the throttle, and listening to that box of rocks overrun sound.

In the end, it wasn't the ideal way to drive an Aventador S, but I'll take what I can get. Next time, though, I'd prefer some wide open canyon roads or, better yet, a racetrack. What do you say, Lamborghini?