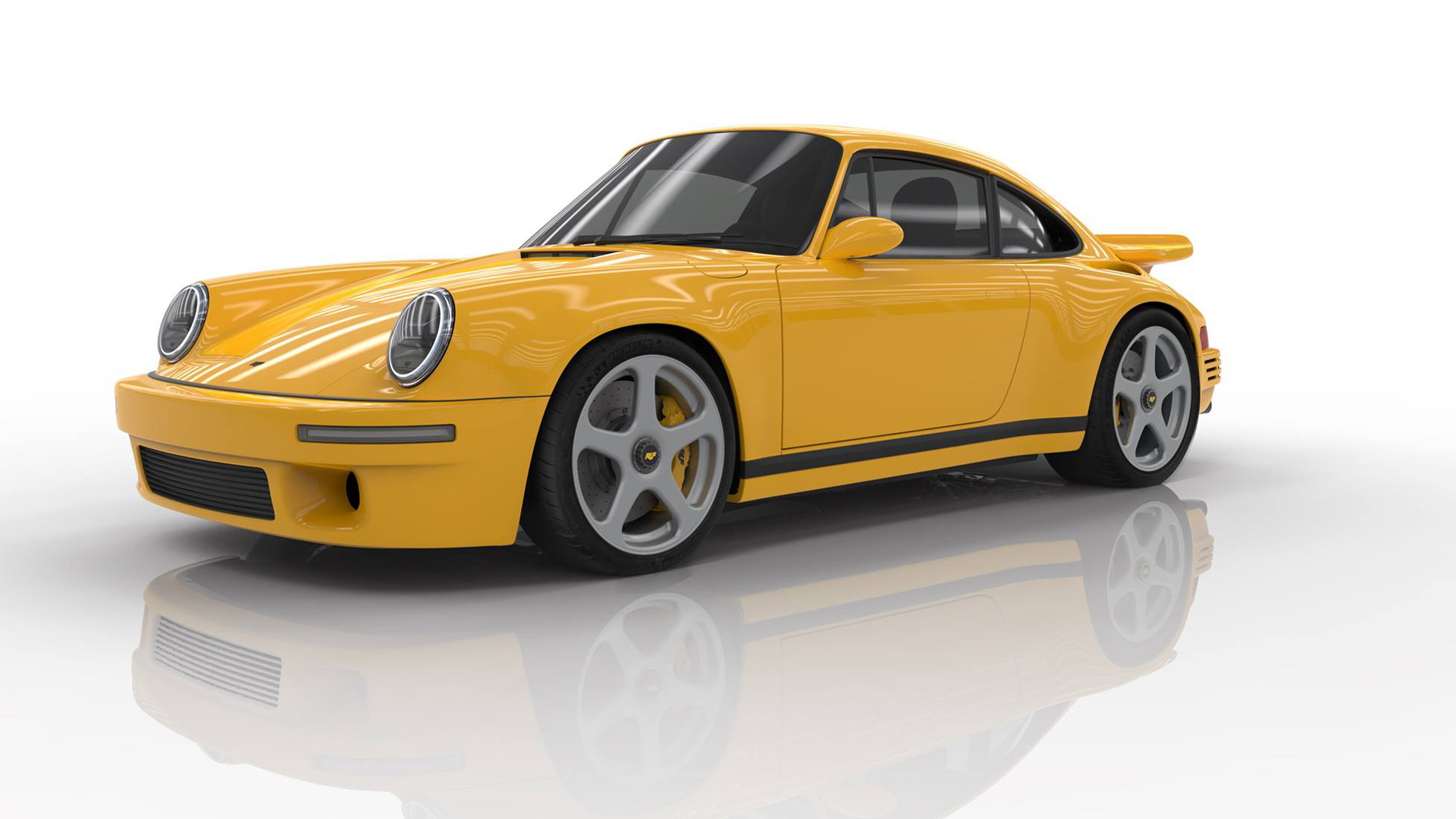 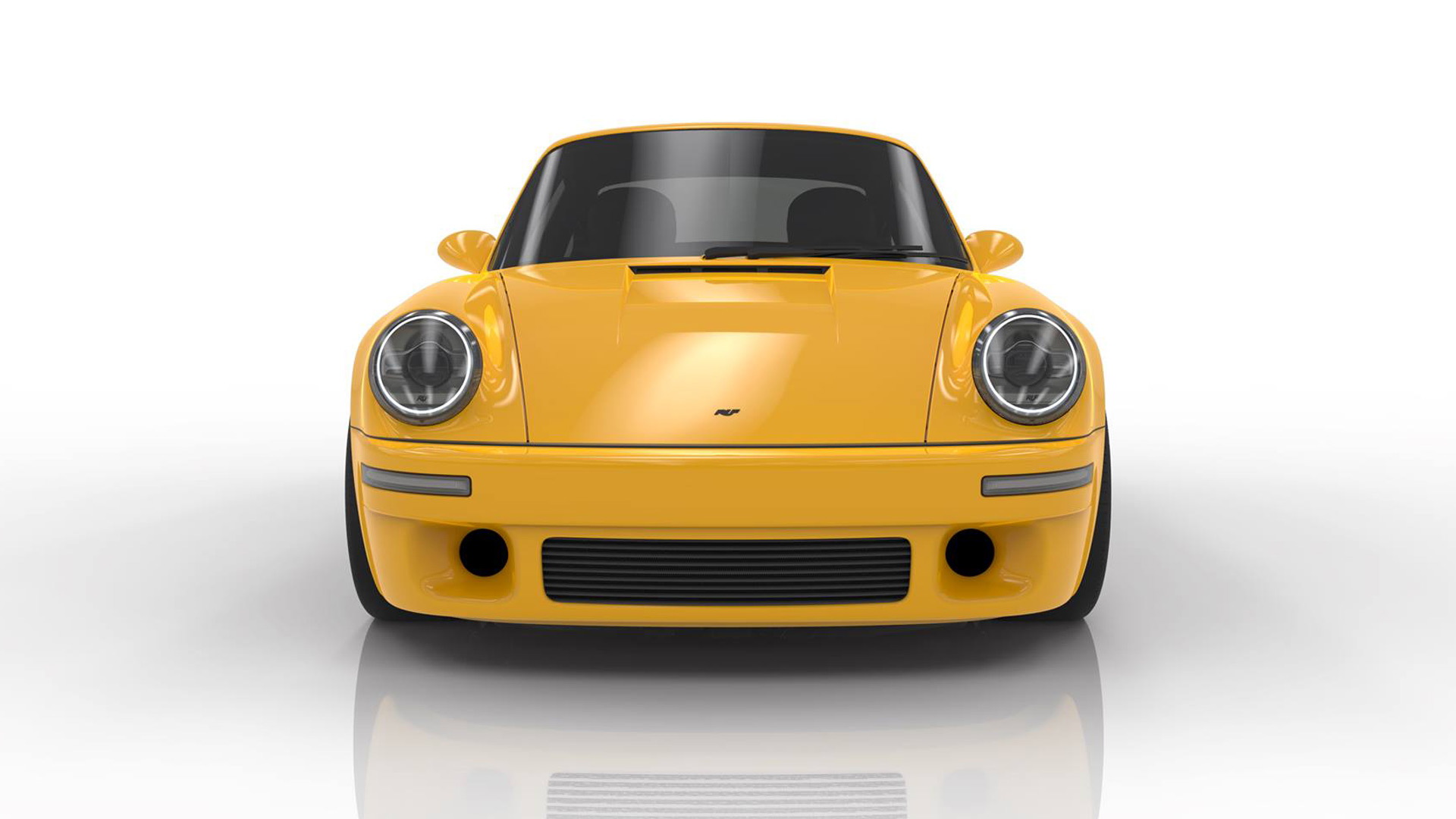 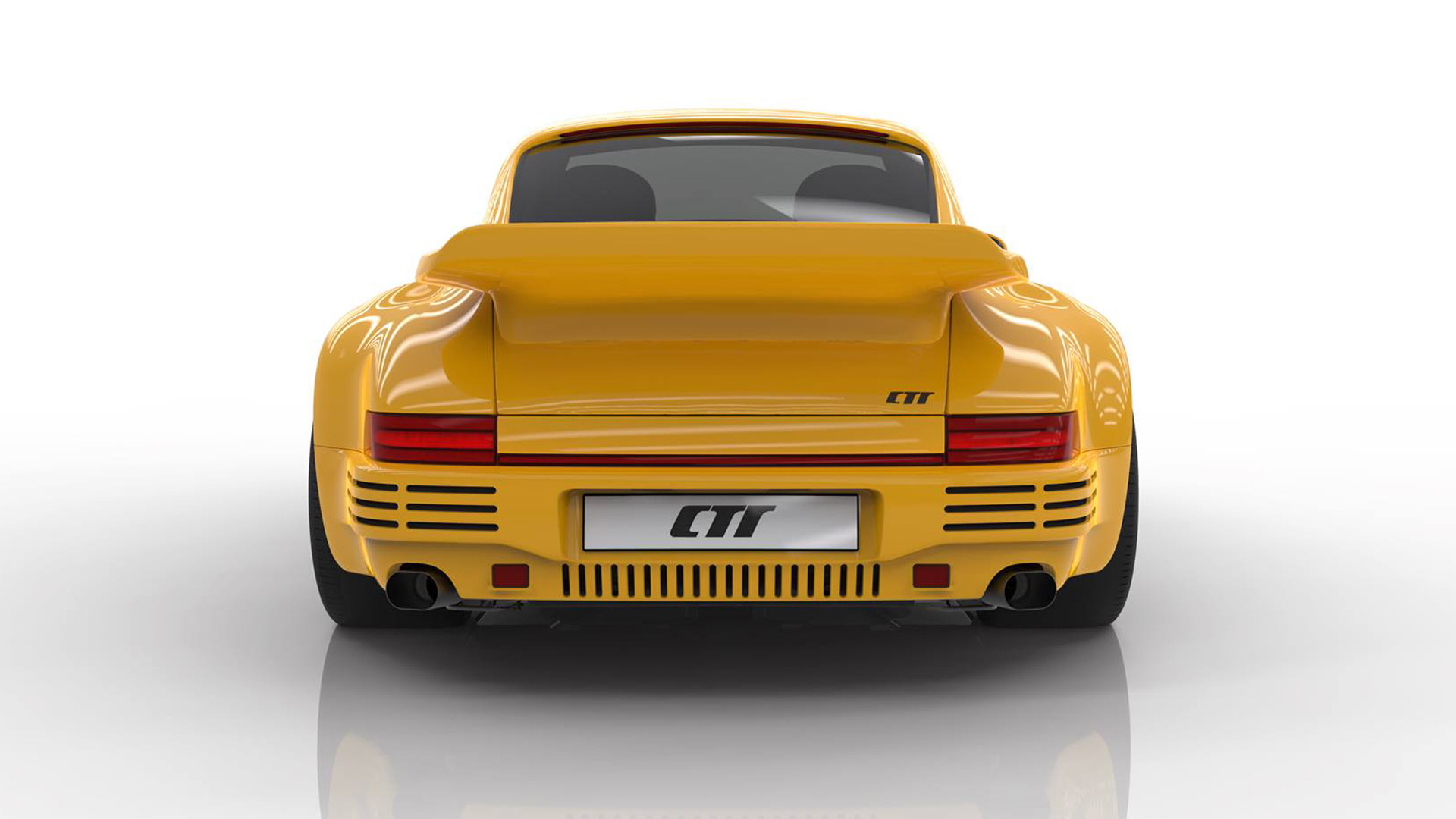 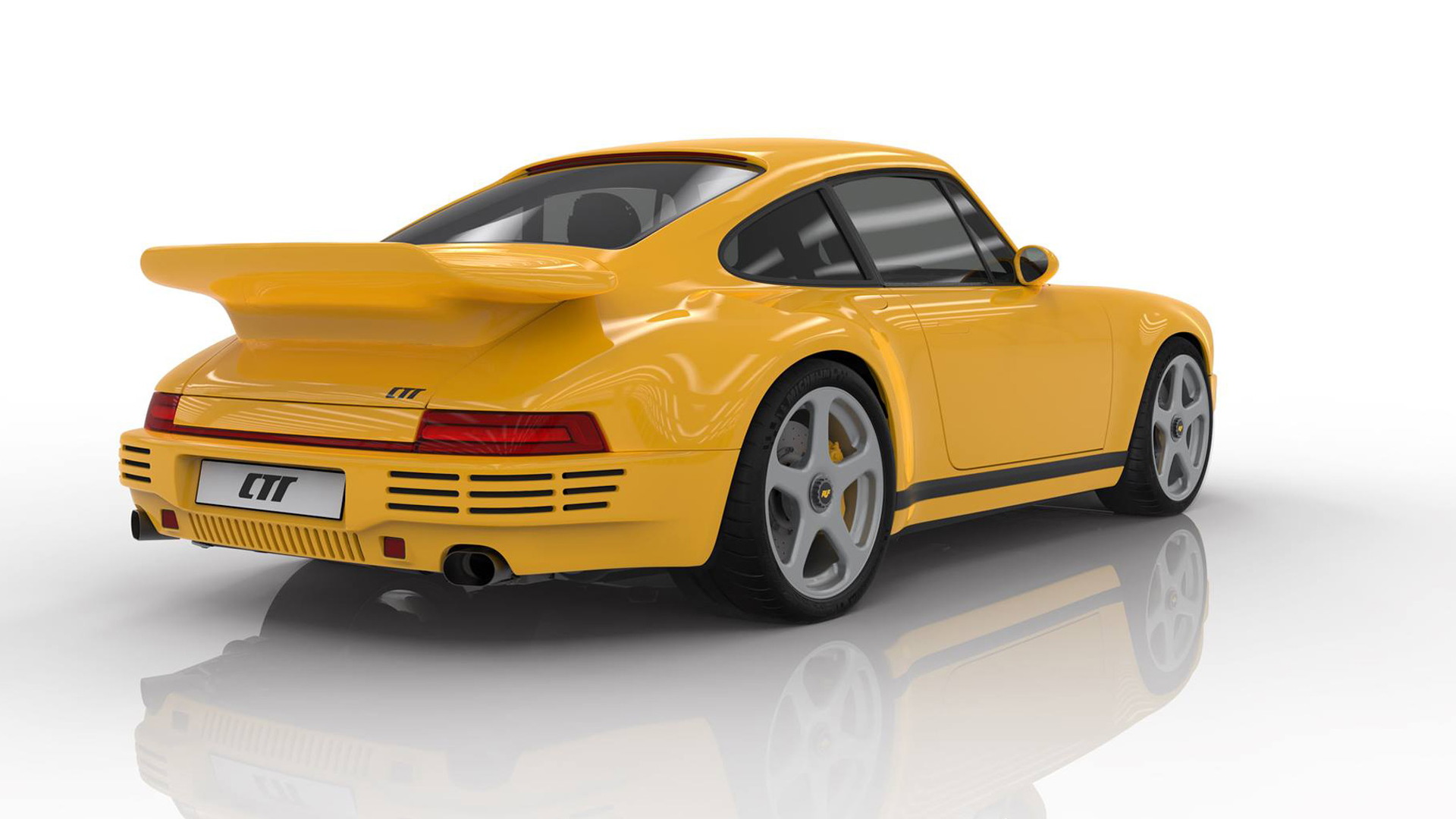 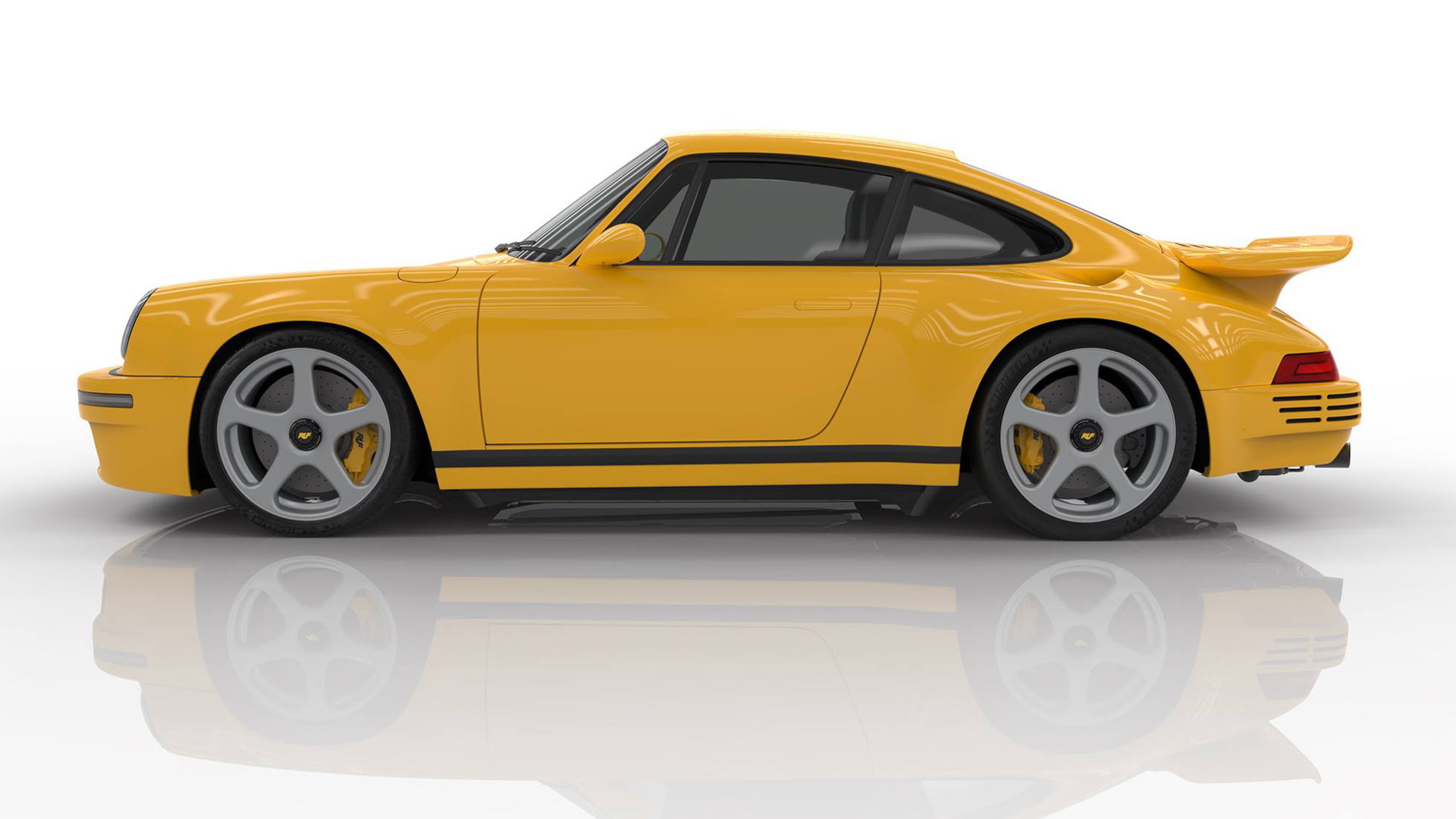 “It’s a love affair with our own history and with our own car that we created 30 years ago. We’re trying to bring it back in a little bit more modernized way.” So says Alois Ruf Jr., about the fourth-generation Ruf CTR, a car that his company is building as an homage to the famed Ruf Yellow Bird from 1987.

In 1987, the Ruf CTR Yellow Bird was a highly tuned version of the Porsche 911. It made a whopping 469 horsepower, weighed only 2,535 pounds, and could reach 210 mph, making it faster than just about all of the established supercars of the day. 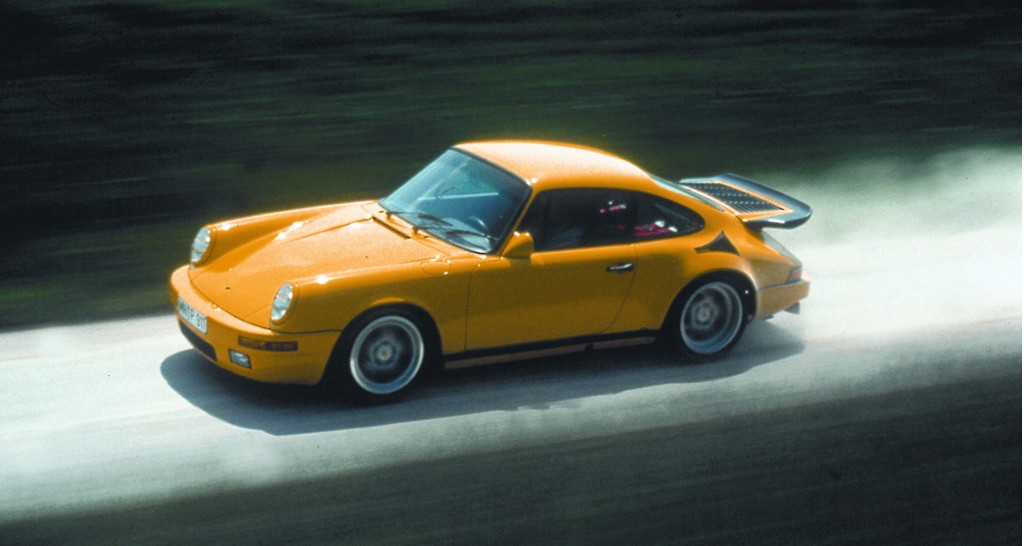 The new CTR, now in its fourth generation, is no longer based on a Porsche body. Instead, this car is a Ruf from the ground up, and it features a carbon fiber monocoque, a 700-hp flat-6, and other thoroughly modern mechanicals wrapped in a body that looks very much like that original Yellow Bird.

Ruf brought the 2017 CTR to the Geneva auto show, where it quickly became the hit of the show, and he was able to sell out the planned production run of 30 cars.

DON'T MISS: The best of an exciting Geneva auto show

We were taken with the car, and we got the opportunity to sit down with Ruf to delve deeper into what makes his fourth-generation CTR tick. We learned that this tiny manufacturer has big ideas. 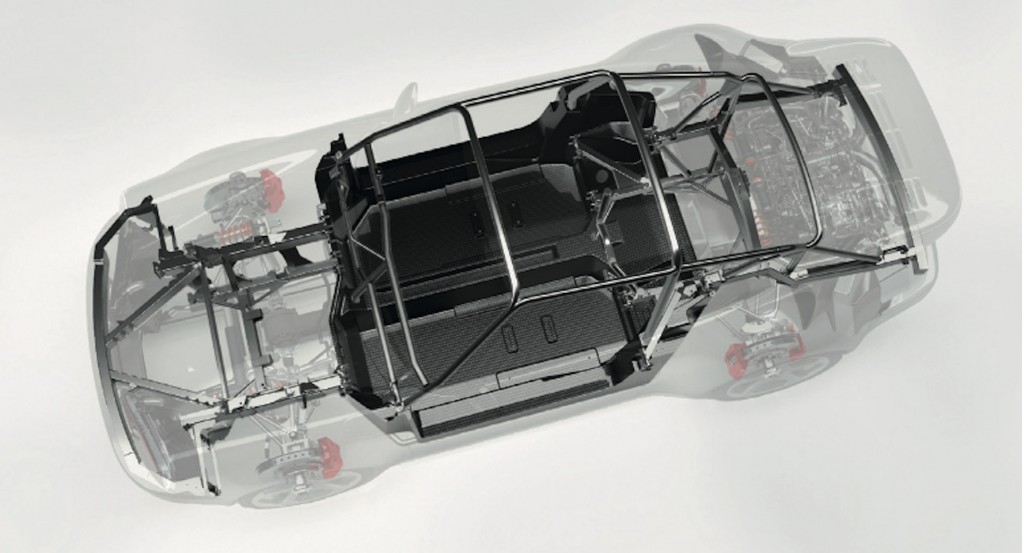 Ruf Automobiles is known as a Porsche tuner, but that’s a bit of a misnomer. As Ruf points out, Ruf is registered as a car manufacturer in both Europe and the United States, and its cars have their own chassis numbers. Until now, the practice has been to take a body in white and axles from Porsche and build the rest of the car. A look at the company’s website shows models such as the Ruf Turbo Florio based on the current 911 Targa, the Ruf 3800S based on the Boxster, and the crazy mid-engine CTR3 with 777 hp.

“The bespoke vehicle is something that we are known for, and we have made it out of a base model from Porsche in the past decades,” said Ruf. “Building our own car is built on the experience and the history of our company, and we feel that this can be continued because there is a desire and a demand for this type of vehicle. Because we are not going to exceed 50-60 cars per year, we feel it is something that we can continue on a long-term basis.”

But this small company of 68 employees in Pfaffenhausen, Germany, didn’t quite have the expertise to design and build every component of its own car, so Ruf is turning to subcontractors for some of that work.

Ruf worked with the Berlin firm Vela Performance to design the architecture for the 2017 CTR. It is a carbon fiber tub with an integrated steel tubular roll cage to provide the top structure.

The body panels are carbon fiber as well. Ruf Automobile doesn’t have the expertise or the loom to lay out the carbon fiber and the company is in the process of negotiating with subcontractors to determine which company will do that work. 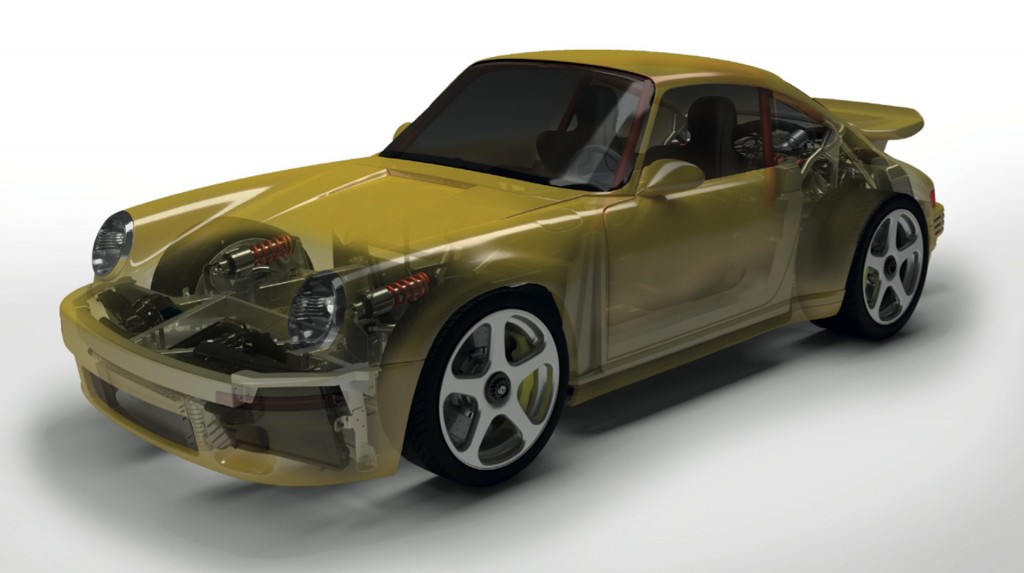 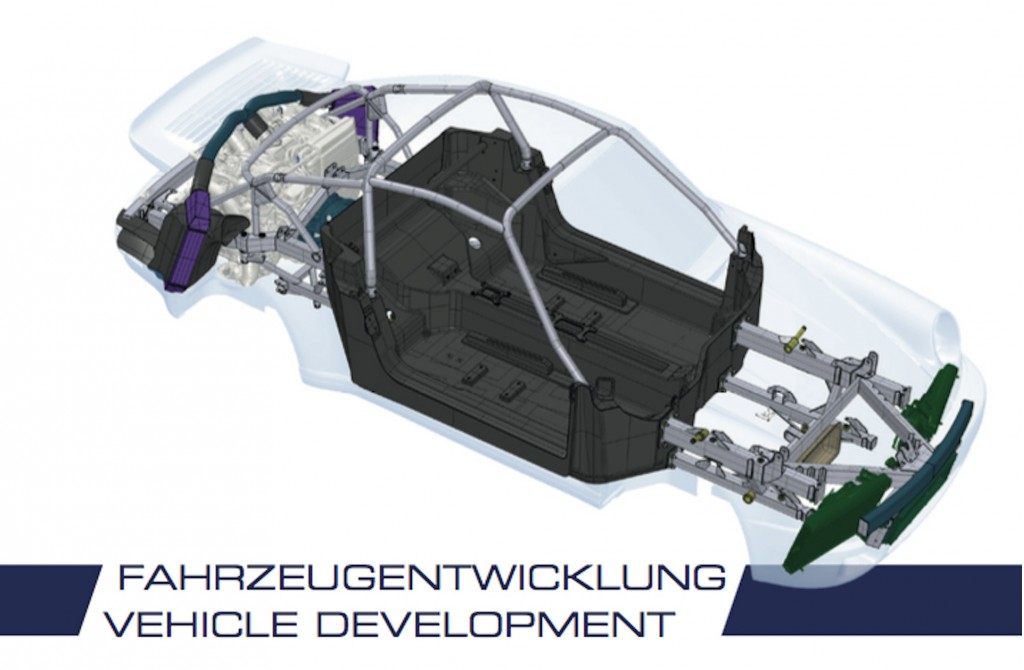 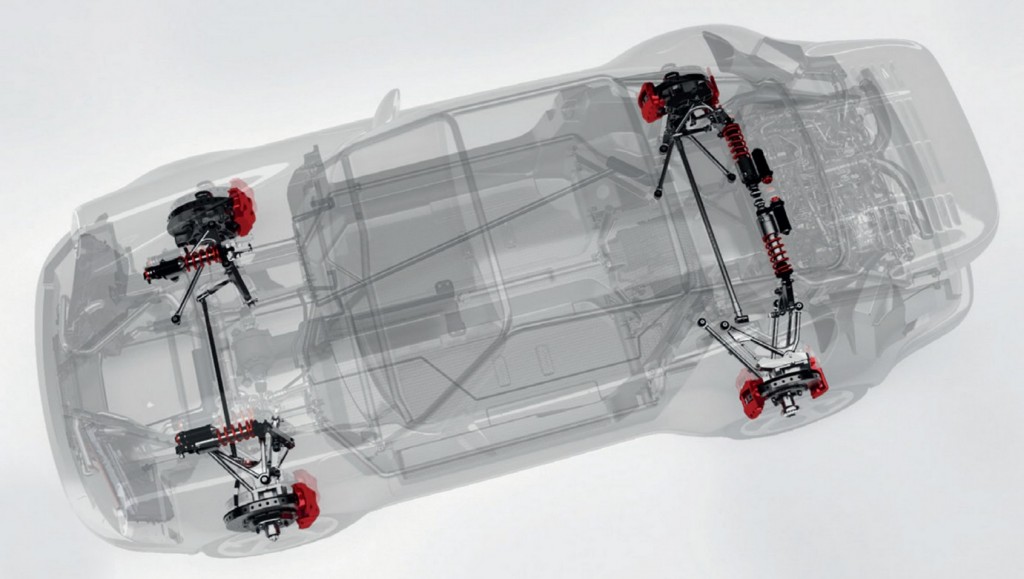 Those suspensions are double wishbone units with pushrods and horizontal mounted shock absorbers and coil-over springs. These are longitudinally mounted in the front and transverse mounted in the rear. “It’s a DNA from all the LeMans cars,” Ruf said.

Open the engine cover and you can see the in-board mounted dampers on top of the engine in the rear.

Ruf is sourcing the coil-over dampers from ZF, as well as the limited-slip differential, anti-lock braking system, and electronic stability control/traction control system. Ruf says the electronic nannies can be turned off completely. “It’s a very analog car," he noted.

That’s a lot of tire under a car sized like a 964-generation Porsche 911. “We feel it’s needed to make a good lap time on the racing circuit and it’s also needed for the horsepower,” Ruf noted. 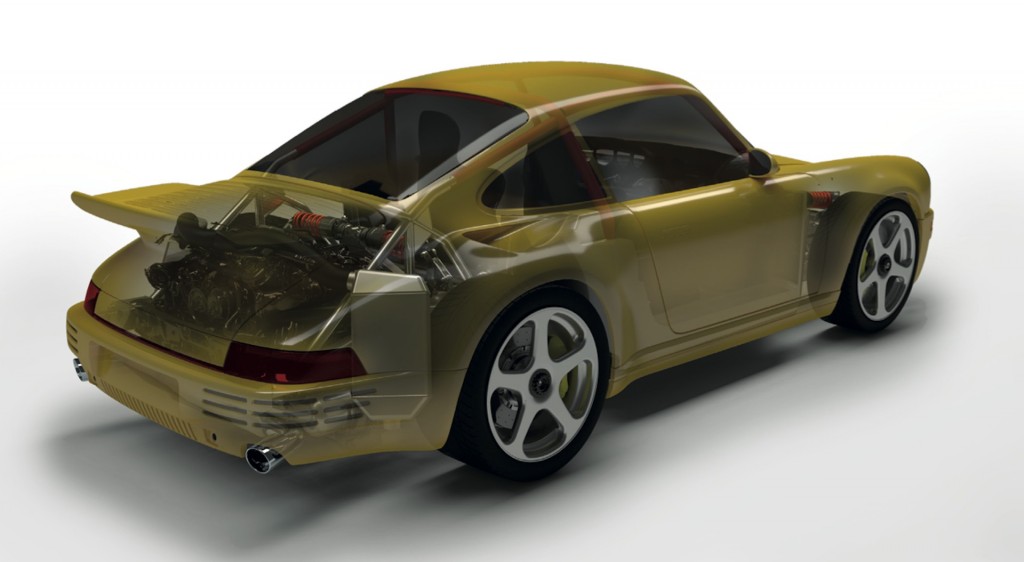 Ruf Automobiles didn’t need to go to an outside vendor for the engine development. The engine in the CTR is the company’s RT12, which stands for Ruf Turbo, 12th generation. Based on the 997-generation Porsche 911 Turbo engine, but made by Ruf, this 3.6-liter flat-6 features four overhead cams, two turbos that use variable turbo geometry, two intercoolers, and 17.4 psi of turbo boost. It produces 700 hp and 649 pound-feet of torque.

The engine uses dry sump lubrication to handle cornering forces on a track without oil starvation.

Again, Ruf worked with ZF for the transmission. It is a 6-speed manual, and Mr. Ruf says it is a transmission designed specially for Ruf and geared for the car’s 225 mph top speed. 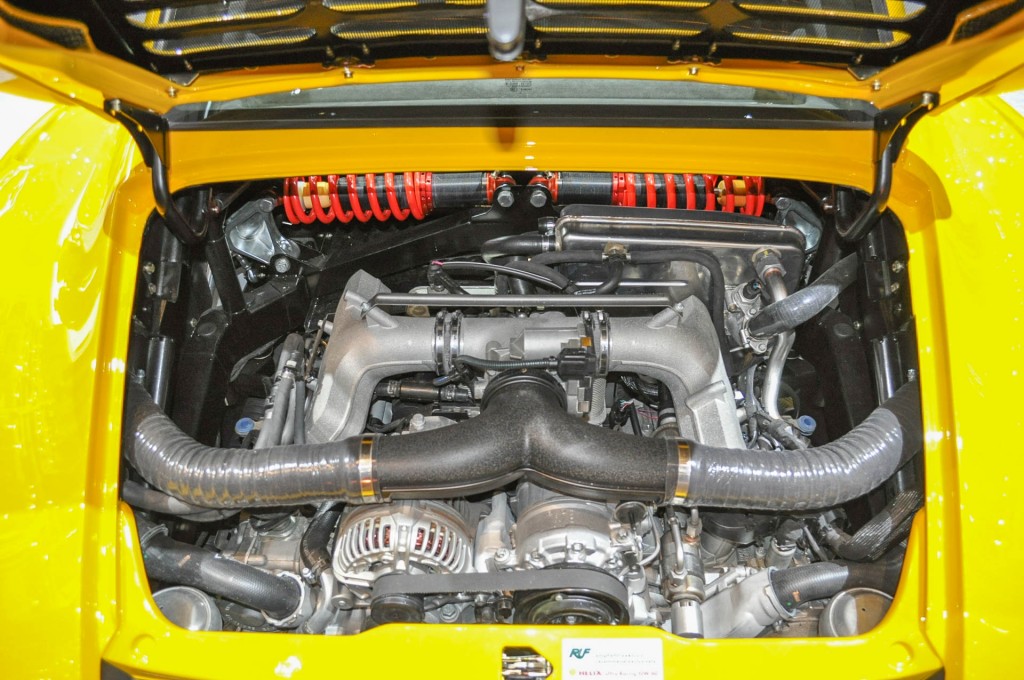 All told, the car comes in at just 2,640 pounds dry, giving it a weight ratio of 3.5 pounds per horsepower.

Some preliminary performance figures are in, but Ruf is still in the process of testing the lone prototype.

We imagine some other impressive performance numbers will come soon, perhaps even a Nürburgring time.

“There’s not much to be said about the interior,” Ruf noted. “There’s two seats, a steering wheel, a shift lever, and there’s not much left. It has a dashboard that has five instruments.”

Those seats have carbon fiber frames, and they, along with just about every other surface of cockpit, are covered with Alcantara. The seats also have cloth inserts with a plaid pattern.

The pedals are aluminum, and the gauges are simple analog units with green typefaces. There are no infotainment or data recording systems here.

“There’s only one screen in the car and that’s the windscreen,” quipped Ruf, adding that owners can use their iPhones to keep track of lap times instead of adding unnecessary systems that would add weight to the car.

Ruf has a dedicated customer base from decades in the business and many of its planned run of 30 cars were already sold by the time the company revealed the fourth-generation CTR in Geneva. By the end of the show, they were all sold out, despite the nearly $800,000 price tag.

“Now we are a little bit overwhelmed. We have a big list and we have to figure it out,” said Mr. Ruf.

When asked if there is chance of going beyond the planned 30, he responded, “We have to consider it now.”

As of now, only one prototype exists, though one or more additional prototypes will be built. Ruf plans to deliver the first customer car in May or June 2018.

Buyers will be able to attend a Ruf driver’s school, which the company runs every year. “It’s basically a track day where you learn how to drive your car and become comfortable and more one-to-one with the car, but we’re not running it for competition,” Ruf explained. This year’s school will be at the Hockenheimring outside of Hockenheim, Germany, but the school travels to different locations each year.

What does the future hold?

Aside from the possibility of building more than 30 cars, Ruf sounds serious about building more of his own cars from the ground up. “We will make spinoffs and similar cars in the future because we believe that there is the potential that it can be built in very limited numbers every year and there will be buyers for it,” he said.