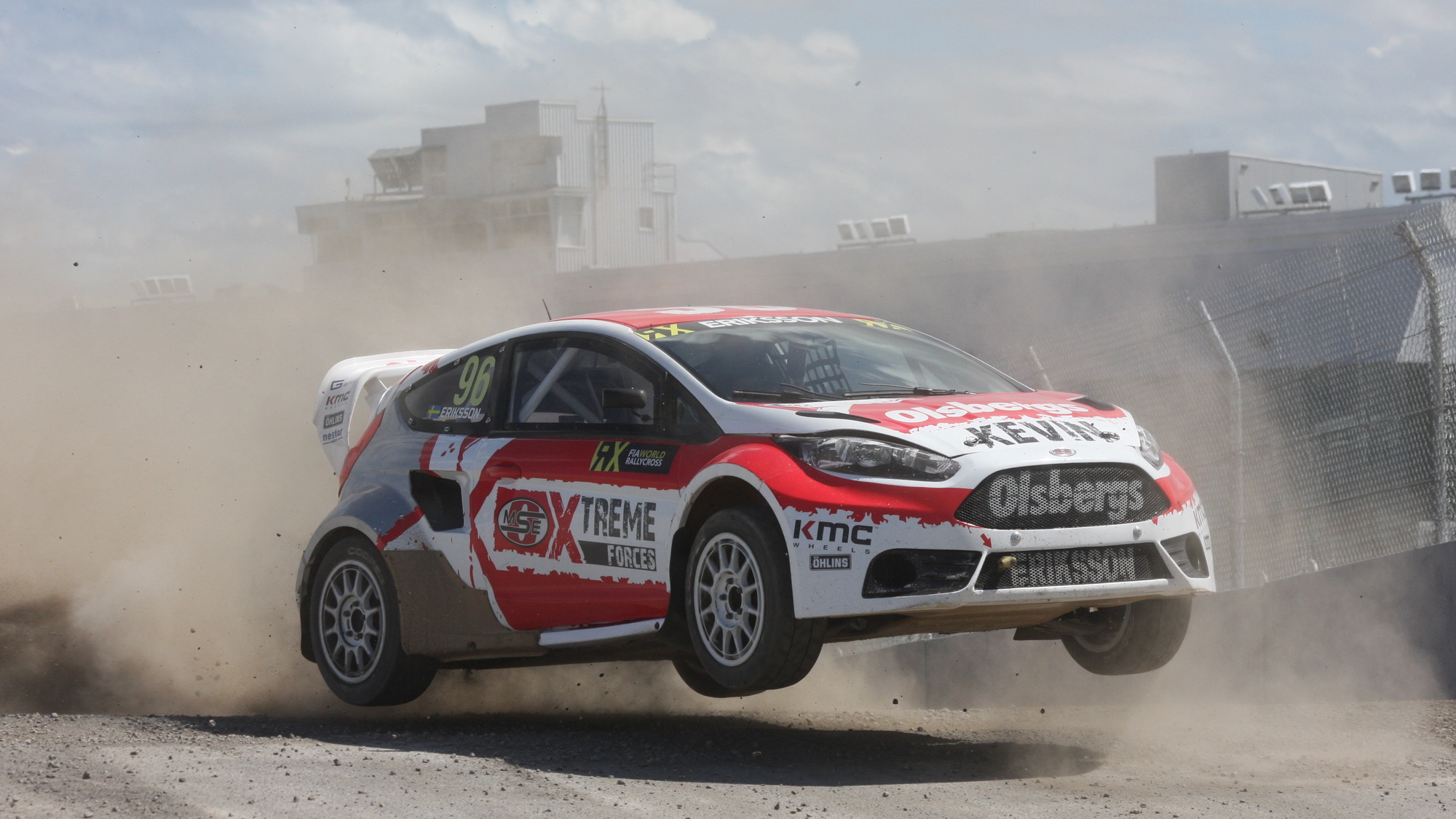 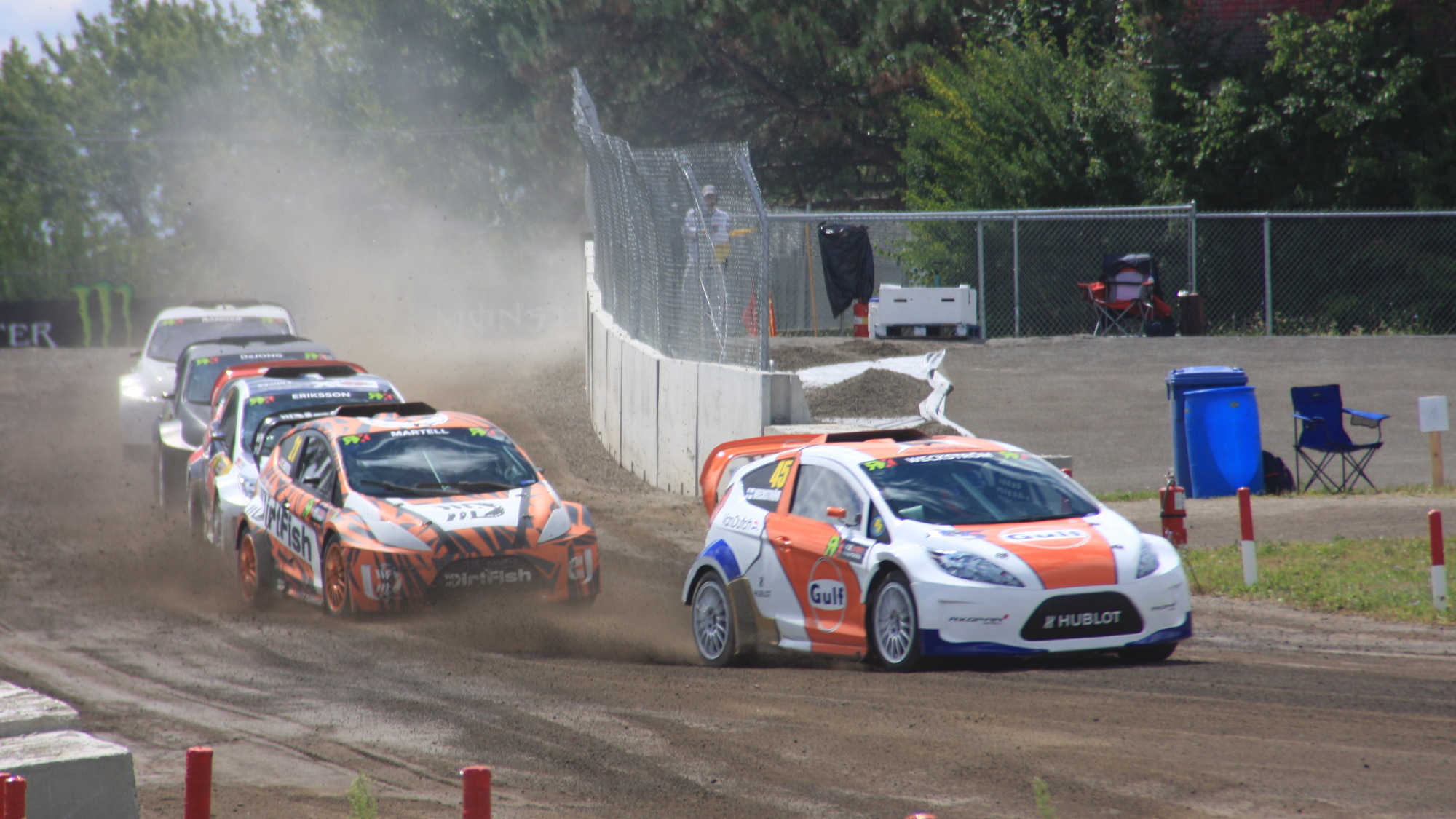 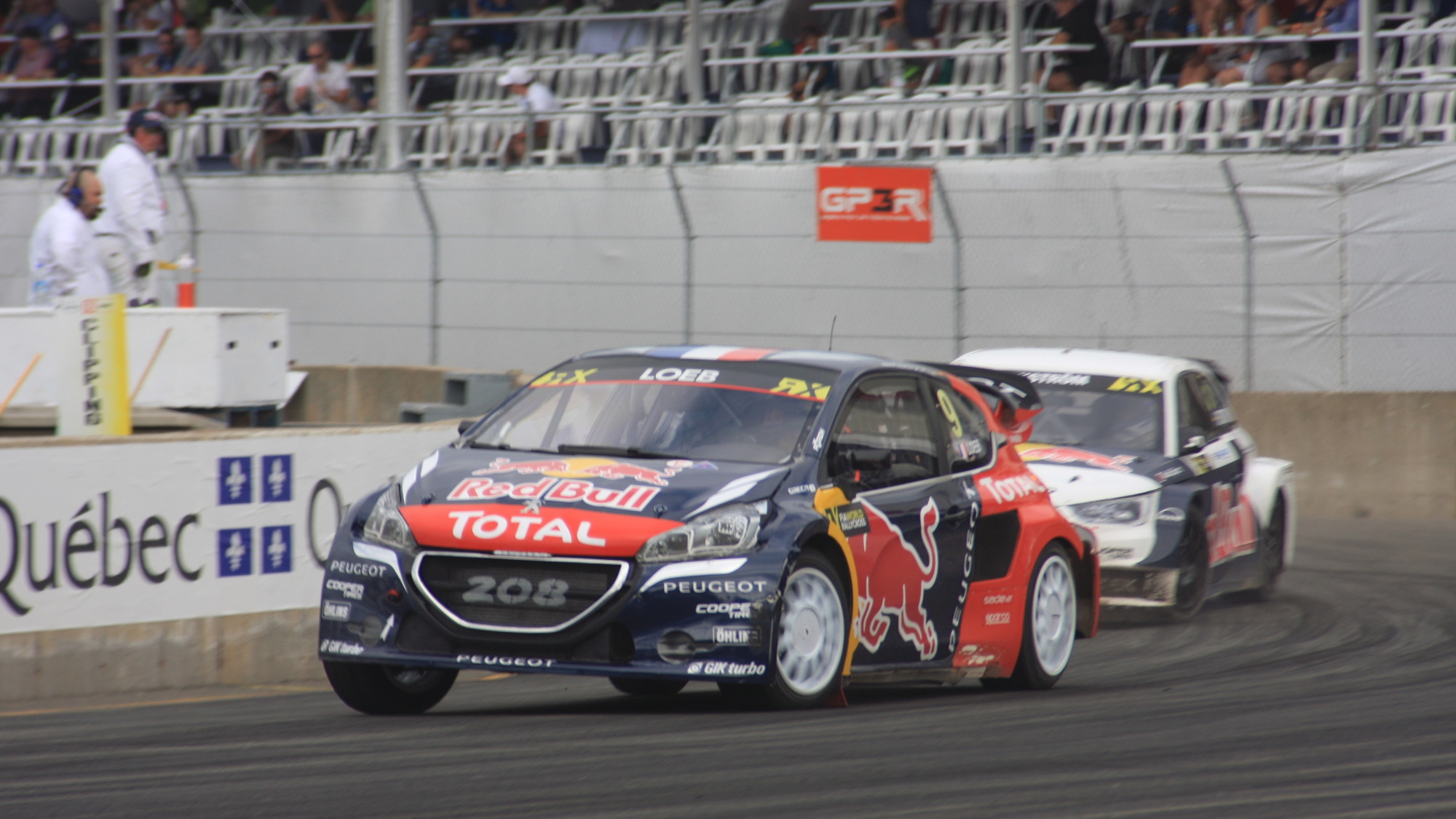 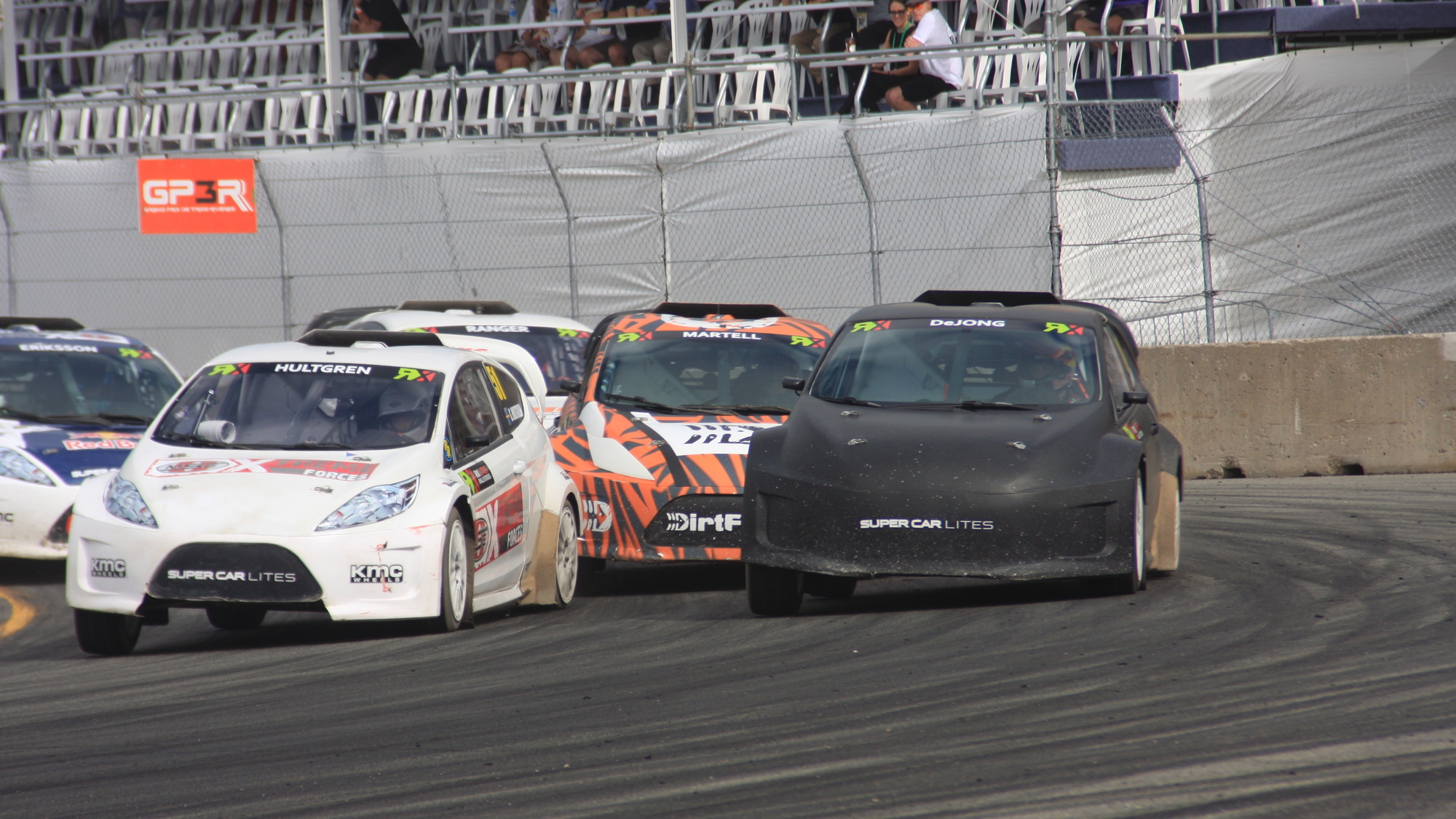 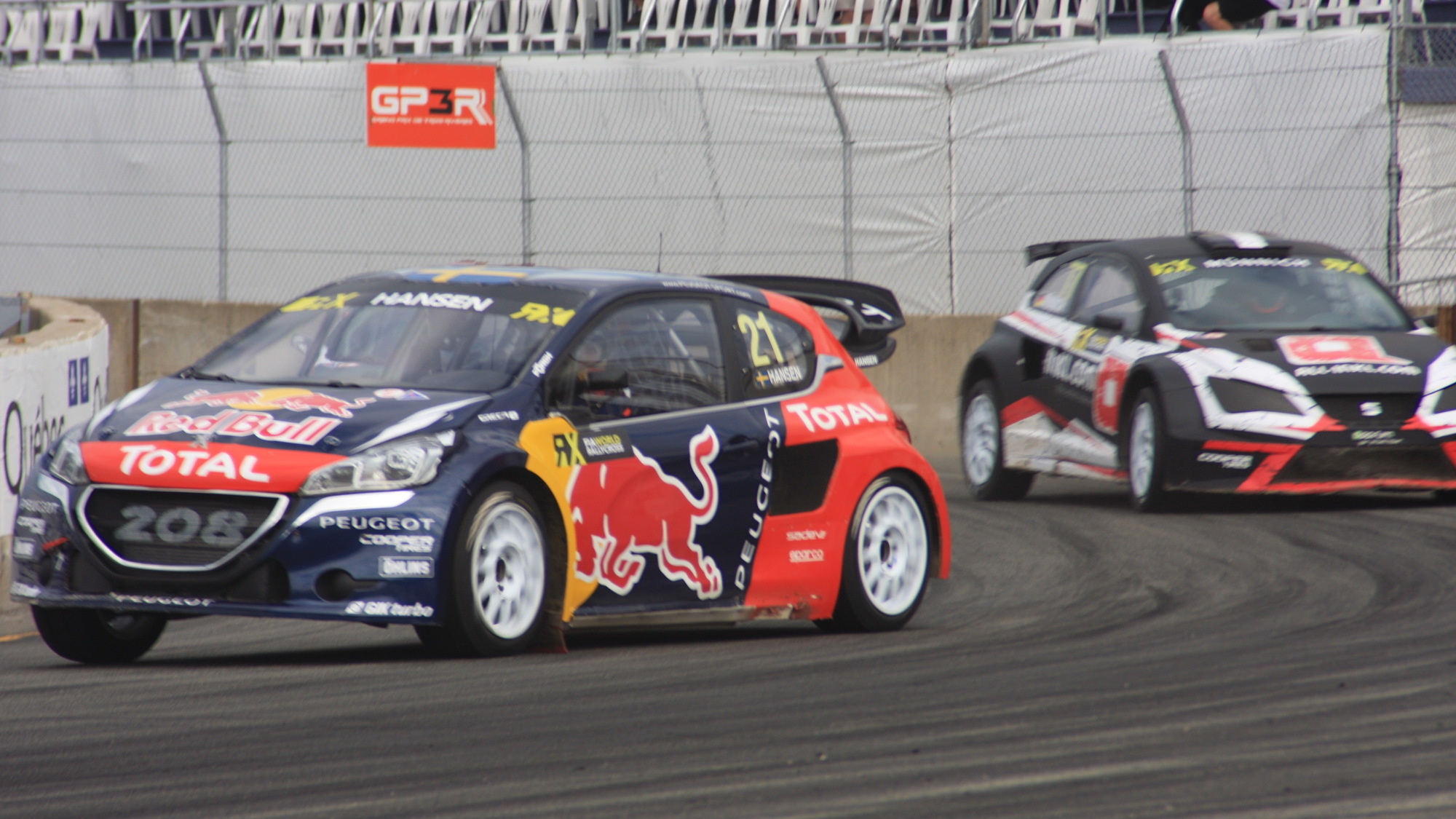 It's a bumper sticker on the back of the Hoonigan cars that compete in the FIA World Rallycross Championship series. It's more than a bumper sticker or a pithy adage, though. It's a philosophy for the whole series.

The FIA World Rallycross Championship is a relatively new rally racing series that kicked off in 2014. It's not to be confused with Global Rallycross, which, despite its name, is held only in the United States. The World RX is truly a world event, with races in Canada, Argentina, and throughout Europe. World Rallycross also shouldn't be confused with stage rally, which takes place on long road/off-road courses and involves a co-driver to act as a navigator.

World Rallycross includes 12 races and is headlined by the RX Supercar class. The 2016 season started in April in Portugal and concludes in November in Argentina. This past weekend, I attended the seventh race of the series, the Grand Prix De Trois-Rivieres (GP3R) in Trios-Rivieres (French for Three Rivers), Quebec, a couple hours outside of Montreal, to take in the sights, sounds, and smells of this unique form of racing. 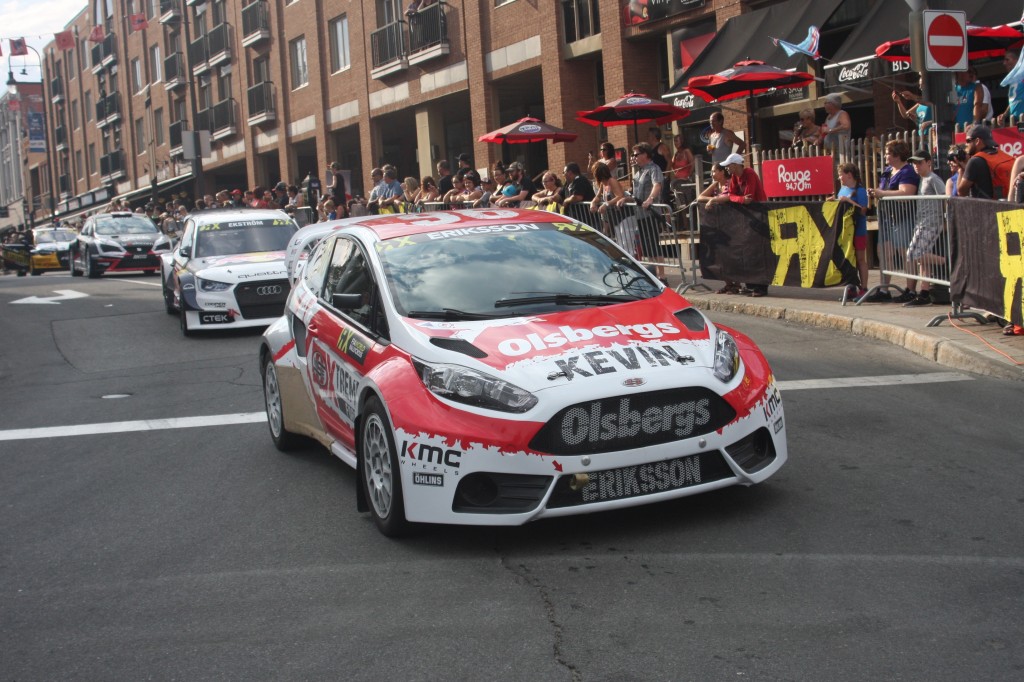 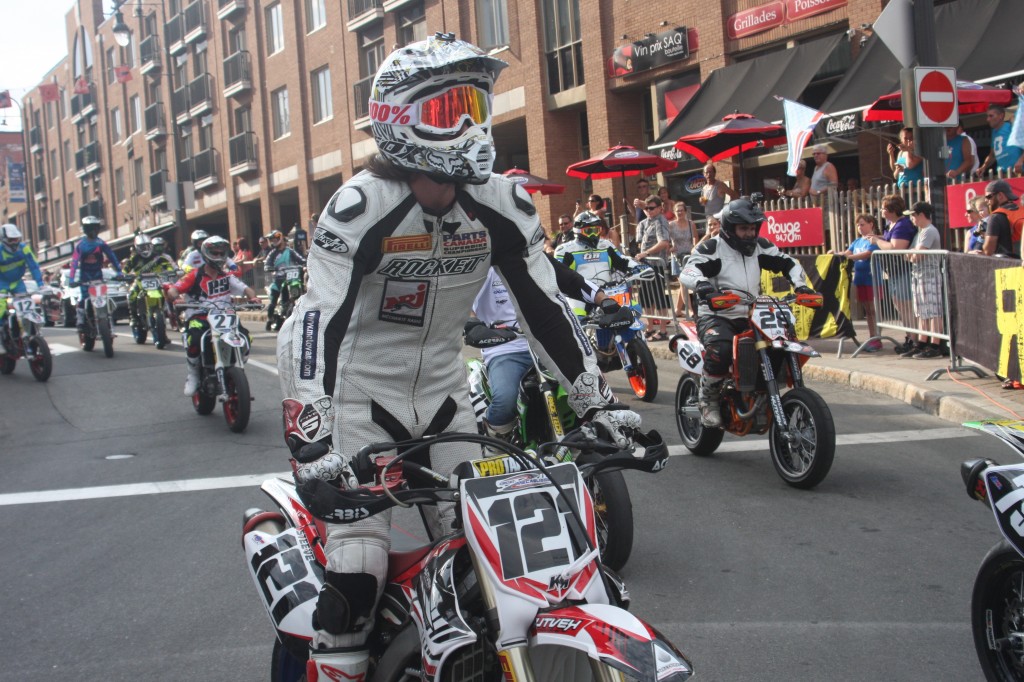 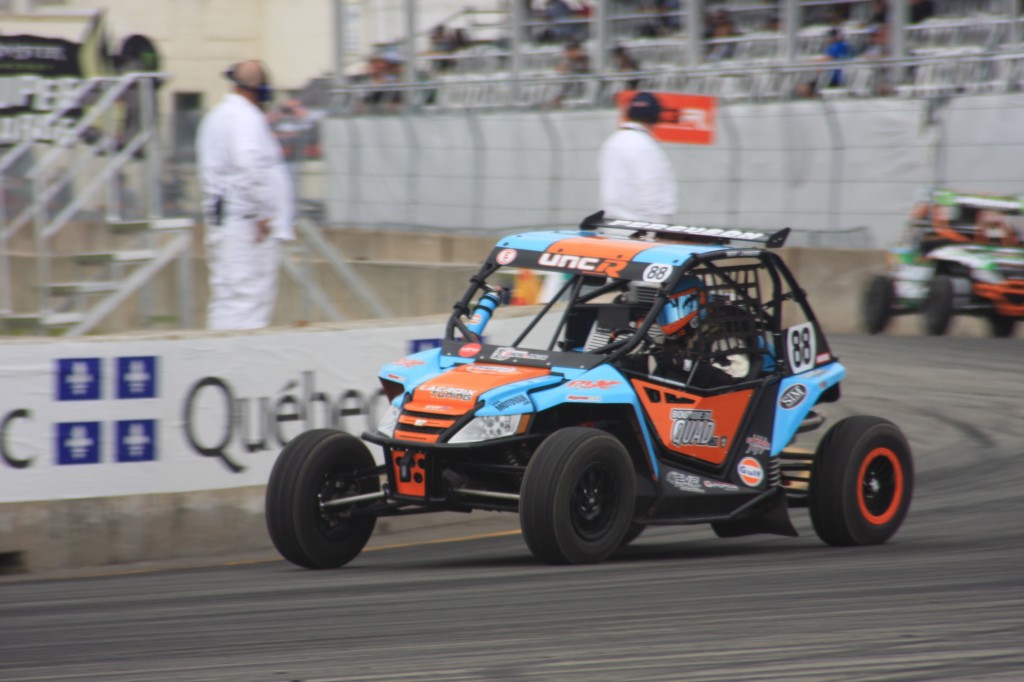 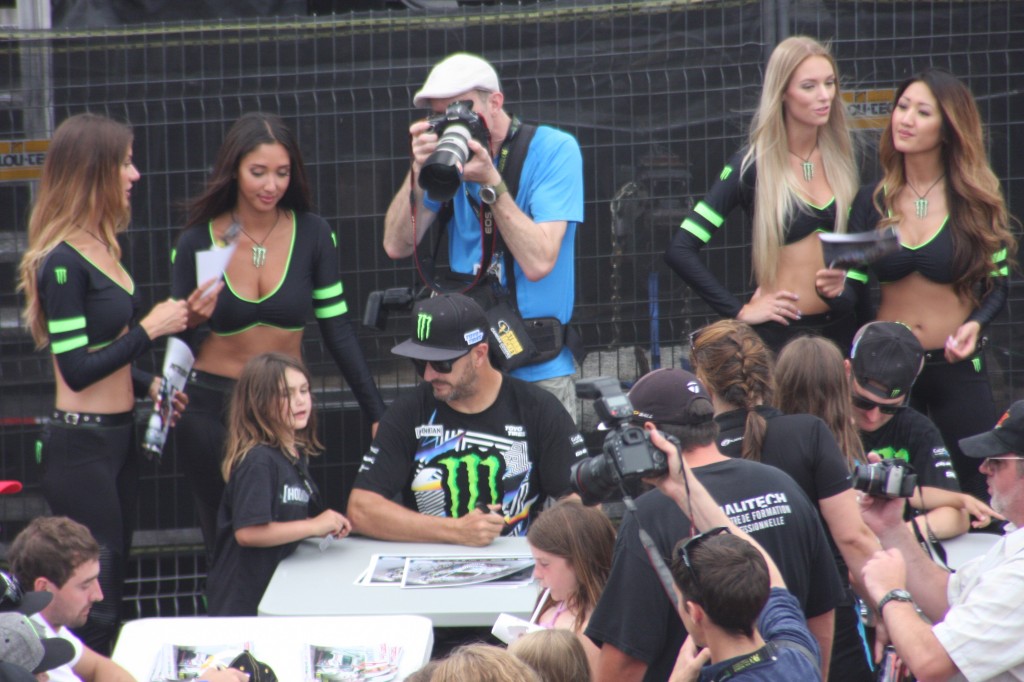 At the G3PR, the main RX Supercars were supported by the lesser RX Lites cars, as well as AMA Supermoto motorcycles, Formula Drift Canada, and Canadian UTV Rallycross. At many of the European venues, the series also runs alongside the European Rallycross Championship.

The Cars and drivers

The cars in the RX Supercar class are versatile racing machines. They feature turbocharged 2.0-liter 4-cylinder engines that put out 600 horsepower and 664 pound-feet of torque.  Manual transmission must be used. Total weight is limited to 2866 pounds, including the driver. With the power put to all four wheels, these hottest of hot hatches can accelerate from 0 to 60 mph in 1.9 seconds, which is even faster than a Formula 1 car. The RX Lites cars use the same basic setup but they only make 310 horsepower.

All of the cars are based on factory models, mostly subcompacts with some compacts as well. They are pure race cars, though, with full roll cages, sparse interiors, modified structures, unique aerodynamic body panels, and big rear wings. Full factory involvement is the norm for these cars. 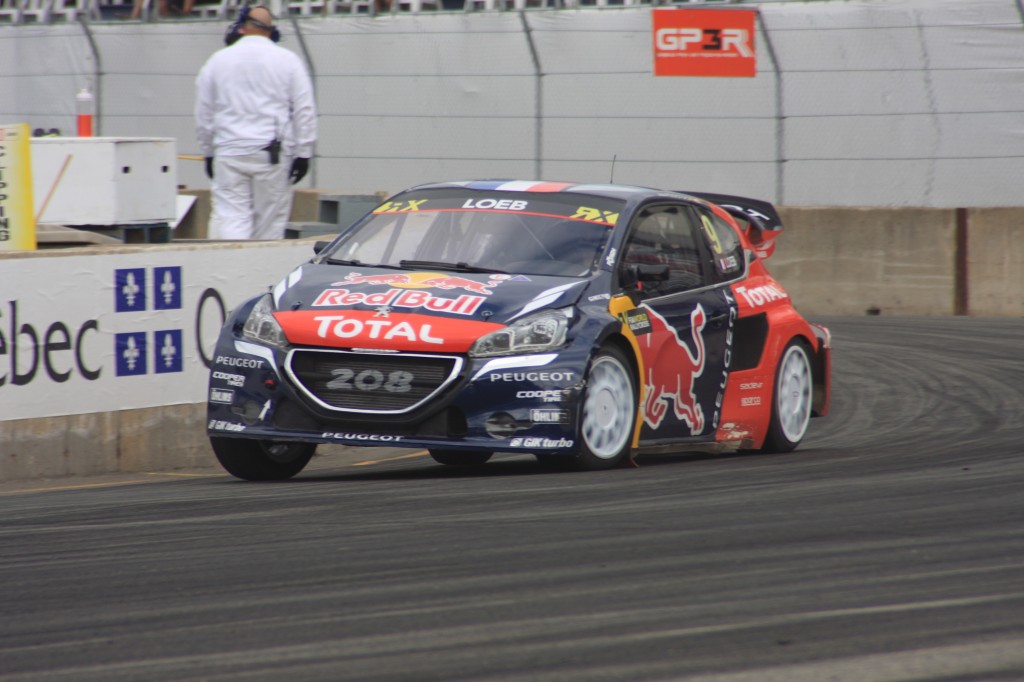 On the track, the RX Supercars can do things most other race cars can't. They have to gain traction on tarmac and dirt, have the suspension travel to survive jumps, and be at home drifting and sliding, as well as carving a line through a turn.

Rallycross traces its roots back to the late 1960s in Europe and it soon gained popularity in the Scandanavian countries. The majority of the drivers are from Finland, Norway, and Sweden, and many of them are quite accomplished. The driver of interest to most Americans, though, is gymkhana king Ken Block and his Hoonigan racing team. Driving a new Ford Focus RS RX, Block is currently 13th in the standings, but his Hoonigan teammate, the Norwegian Andreas Bakkerud is third overall. Norwegian Petter Solberg currently leads the standings and is defending his 2015 title.

A World Rallycross race is a weekend spectacular. The GP3R I attended included a parade of the race cars through town, followed by a meet-and-greet with the fans. Fans could get up close and personal with the cars and the drivers, and they were entertained by a drifting demonstration and sky-high jumps from some of the Supermoto contenders.

The racing is a two-day affair held within amphitheater-style venues that let fans in the stands see most of the action. The tracks are made of both asphalt and dirt and they each include a jump or two. They are also short; lap times in Canada took less then 50 seconds for the Supercars.

Drivers get just 12 laps of practice, which can be awfully challenging for those who haven't been to a track before, followed by four sessions of qualifying. The starting positions for the initial qualifying session are drawn at random, and each subsequent session is determined by the times put up in previous sessions. Each qualifying run is a four-lap race with three to six cars duking it out for the best total time. 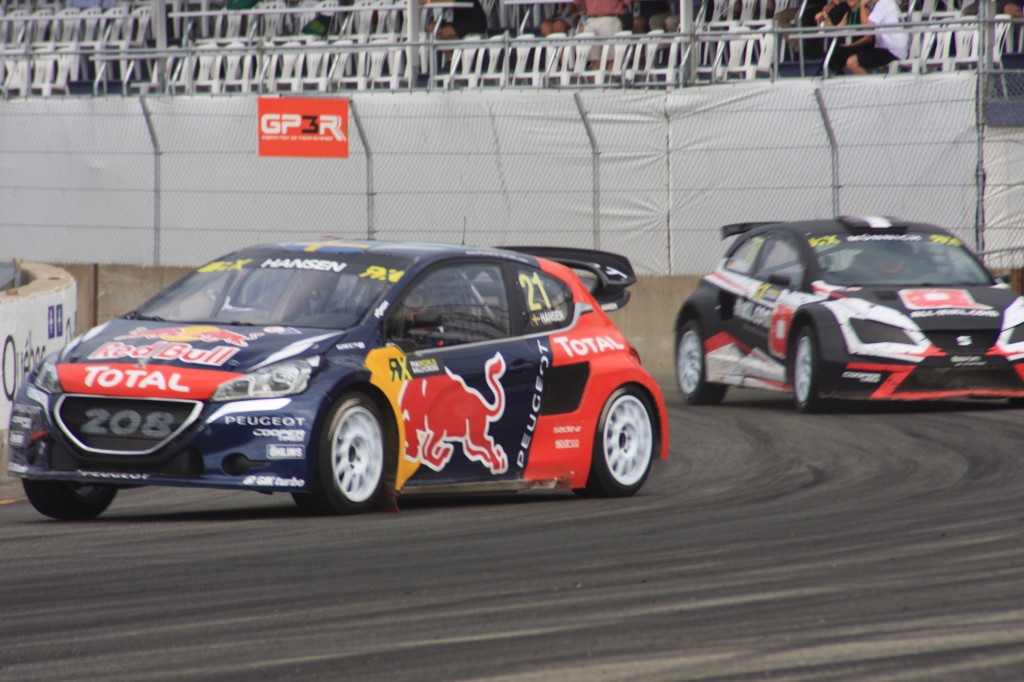 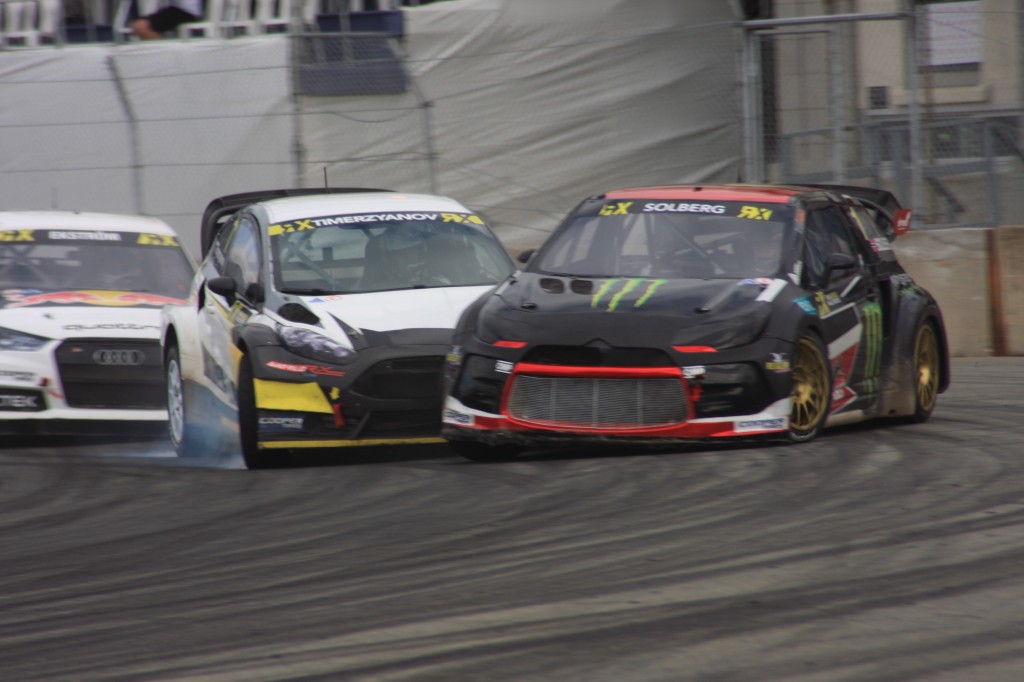 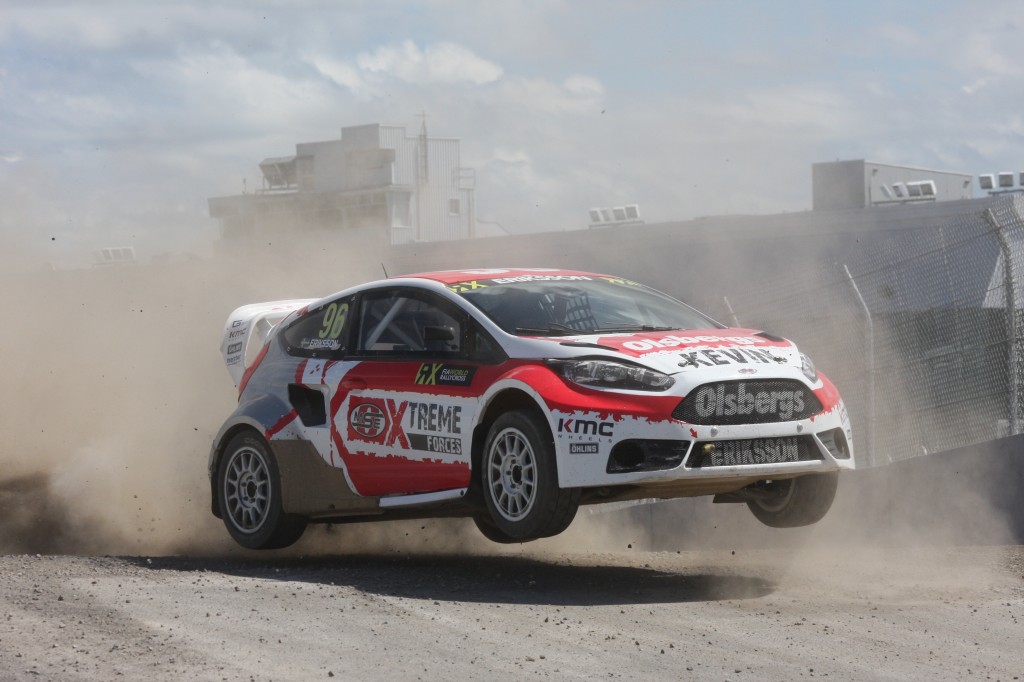 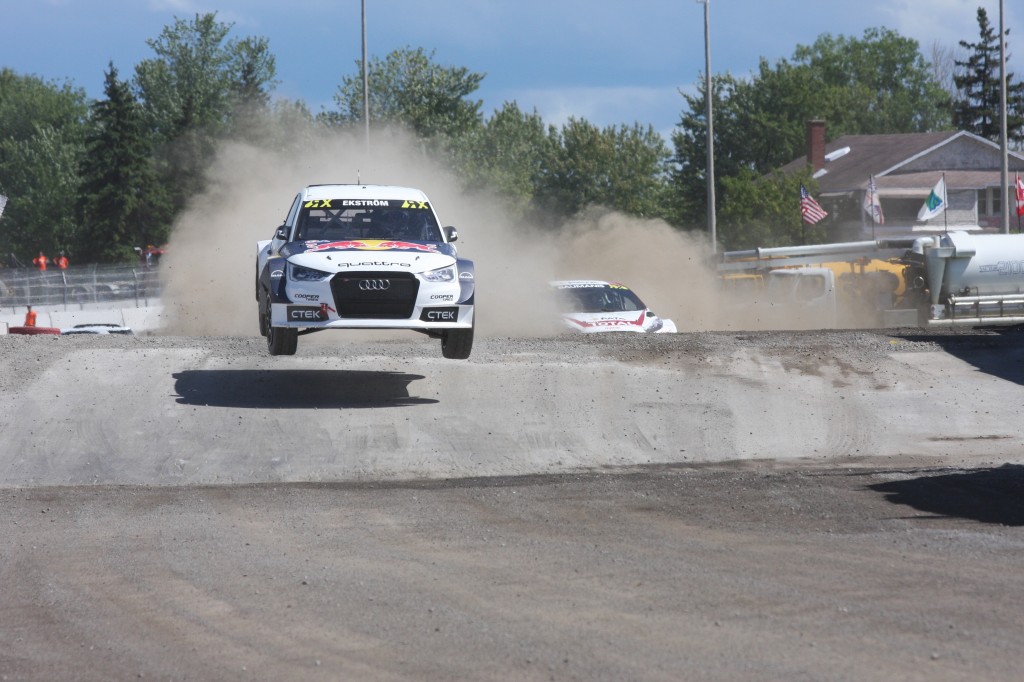 In every race, each driver has to take one "Joker Lap." The Joker isn't so much a lap as it is one optional turn that adds a few seconds to the lap time and tends to mix up the running order. In almost all of the races I witnessed, the two or three drivers at the back of the back took the Joker turn on the first lap and those at the front waited until the last lap, hoping to build up a lead big enough to stay out front after the Joker. Failure to take the Joker results in a debilitating 30-second penalty.

The top 16 qualifiers earn Championship points, with 16 going to the first-place qualifier, down to 1 for 16th. Of those, the top 12 qualifiers are then put into two semi-final races that go six laps. Timing no longer matters. Finishing position does. The top three finishers from each of the two semi-finals go to the final in one last six-lap race. Semi-finalists earn Championship points based on finishing position, with 6 points going to first and 1 point to last. 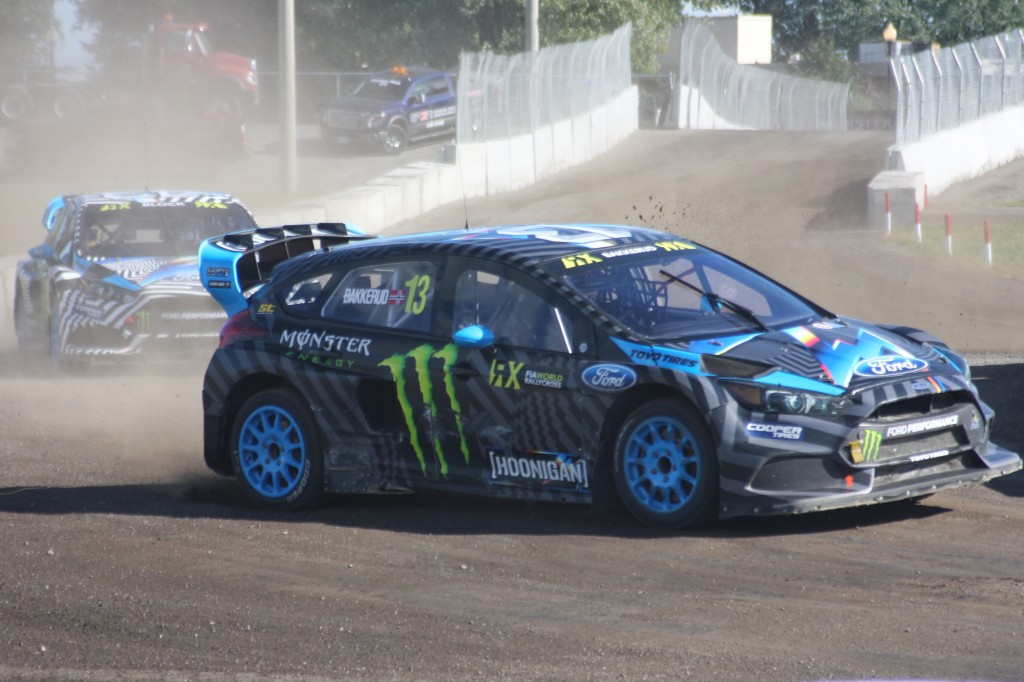 The winner of the final is the overall event winner, but he may not score the most points. The winner earns 8 Championship points, with 5 going to second, 4 to third, 3 to fourth, 2 to fifth, and 1 to sixth. That means a driver can earn up to 30 points at an event and it actually makes those 16 qualifying points (which are determined by how fast a driver is) even more important than the 8 points that can be earned by winning the final.

Tire strategy is important. Teams only get two sets of tires to use over the two days. That makes it best to use one set of tires for all qualifying runs and change to the new ones for the semi-finals.

World Rallycross is truly exciting racing, and it's short snippets make it ideal for today's short attention span fans. It's great that the cars and the drivers are so readily available to the fans. It makes for a party atmosphere that will bring fans back time and again. It just needs to gain their attention in the first place. Anyone who likes Monster Energy Drink should attend. This stuff flows like water at these races.

The racing itself is quite cool. The drivers exercise incredible car control on varied surfaces. The cars don't have to endure long stints, but they do take a beating. The jumps challenge the suspension, tires, and front fascias. The tight turns result in more than a little fender-to-fender and fender-into-fender action. The Joker Lap adds to the racing strategy. And the short races mean drivers have to be aggressive and make their moves as soon as possible.

Maybe "Kill all tires" isn't the best way to sum up the philosophy of World Rallycross. "Go fast and beat the hell out of your car" seems to be more appropriate.