Fiat Chrysler Automobiles in its half-year financial results presentation made on Wednesday confirmed plans for a new generation of the Maserati GranTurismo.

During FCA’s infamous five-year strategy announcement announced in 2014, former CEO Sergio Marchionne said Maserati would get both a sports car based on 2014’s Alfieri concept car, as well as a redesigned GranTurismo. However, in an updated plan announced in 2018, the GranTurismo was noticeably missing. Now it's back.

A slide from yesterday's financial results presentation shows Maserati's product roadmap from 2020 to 2023. It shows that the redesigned GranTurismo is due in 2021 and that a convertible version of the car, referred to here as a GranCabrio, the name Maserati uses for the GranTurismo Convertible outside the United States, will arrive in 2022. 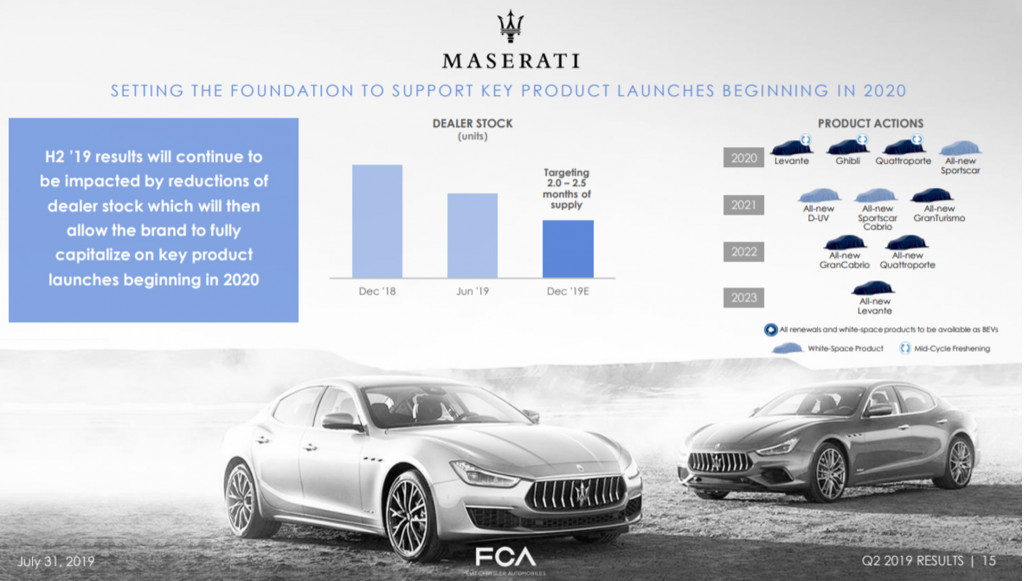 Maserati's Alfieri-based sports car, which we hear might not actually resemble the Alfieri, is on track for a debut in 2020. It will also get its own convertible version, due in 2021.

To differentiate the two models, expect the redesigned GranTurismo to grow in size and become a proper grand tourer. The sports car will likely be more of a Jaguar F-Type or Mercedes-AMG GT competitor.

Crucially, the slide reaffirms Maserati's plan to offer battery-electric versions of every model in its lineup, starting with the new sports car. Maserati's electric powertrain, branded Maserati Blue, will offer up to three electric motors and run on 800-volt battery technology, possibly developed in partnership with Ferrari. And for gasoline fans, all of Maserati's models will also be offered with hybrid powertrains; Maserati has no plans to become a pure EV brand just yet.