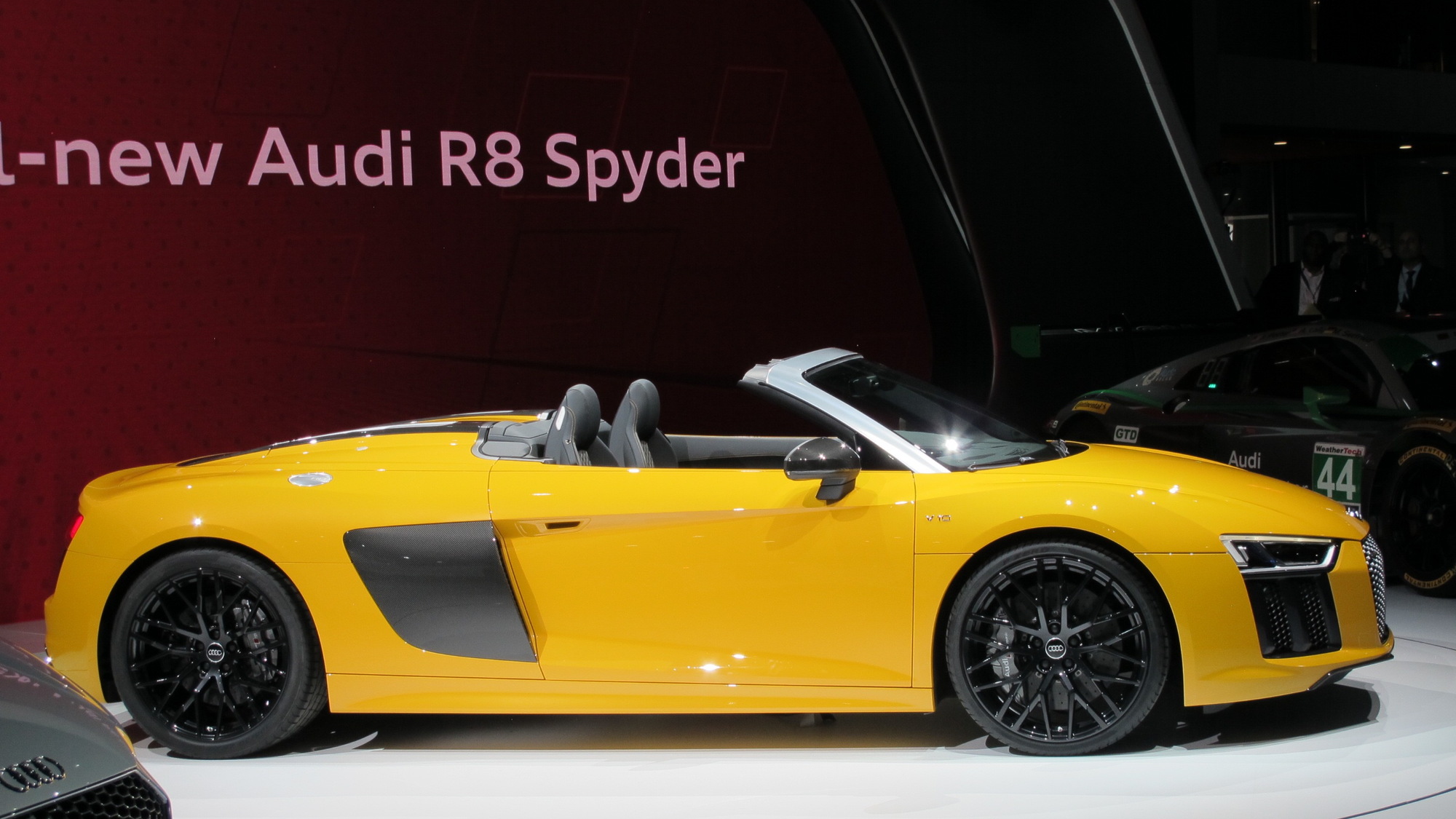 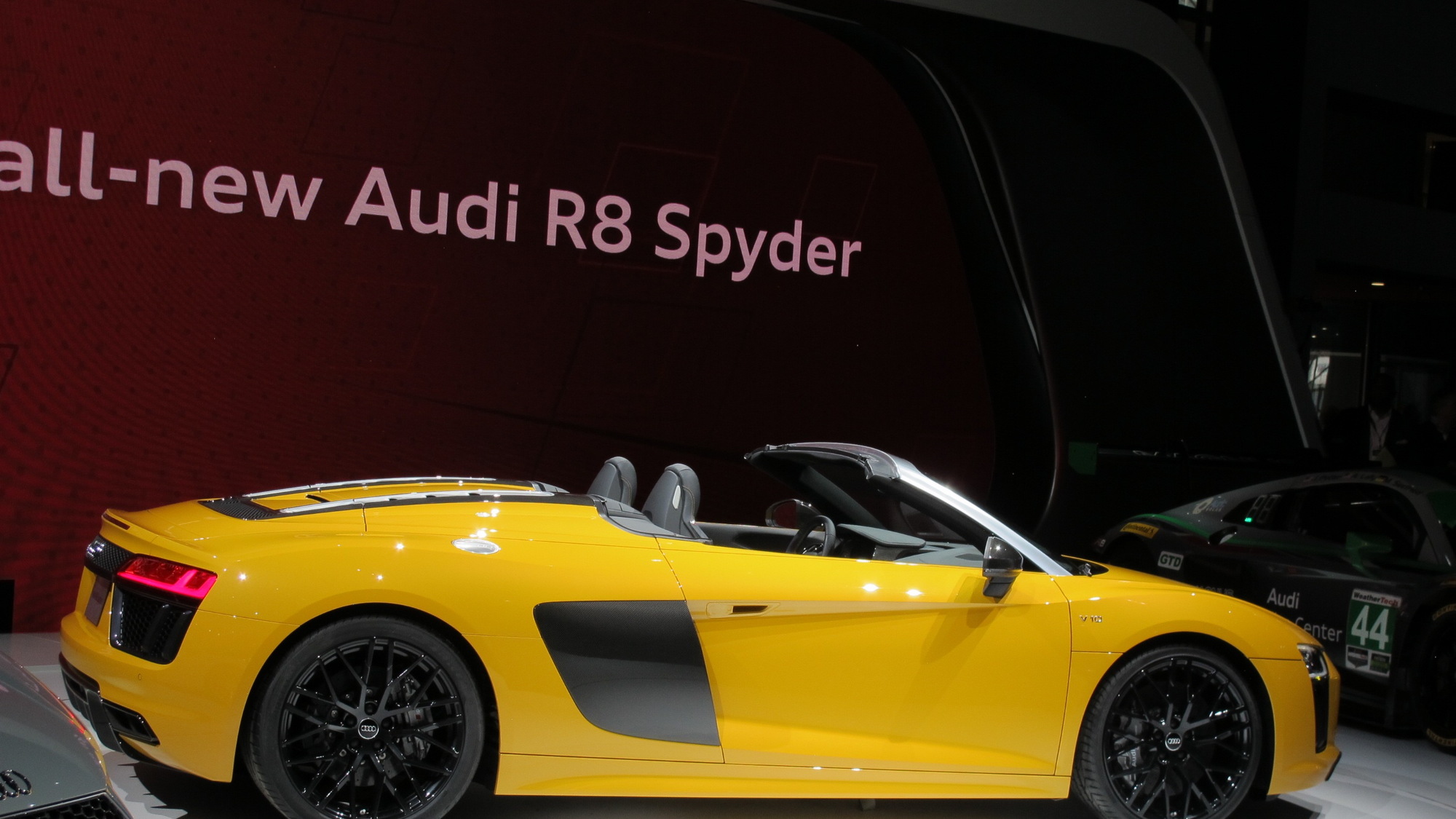 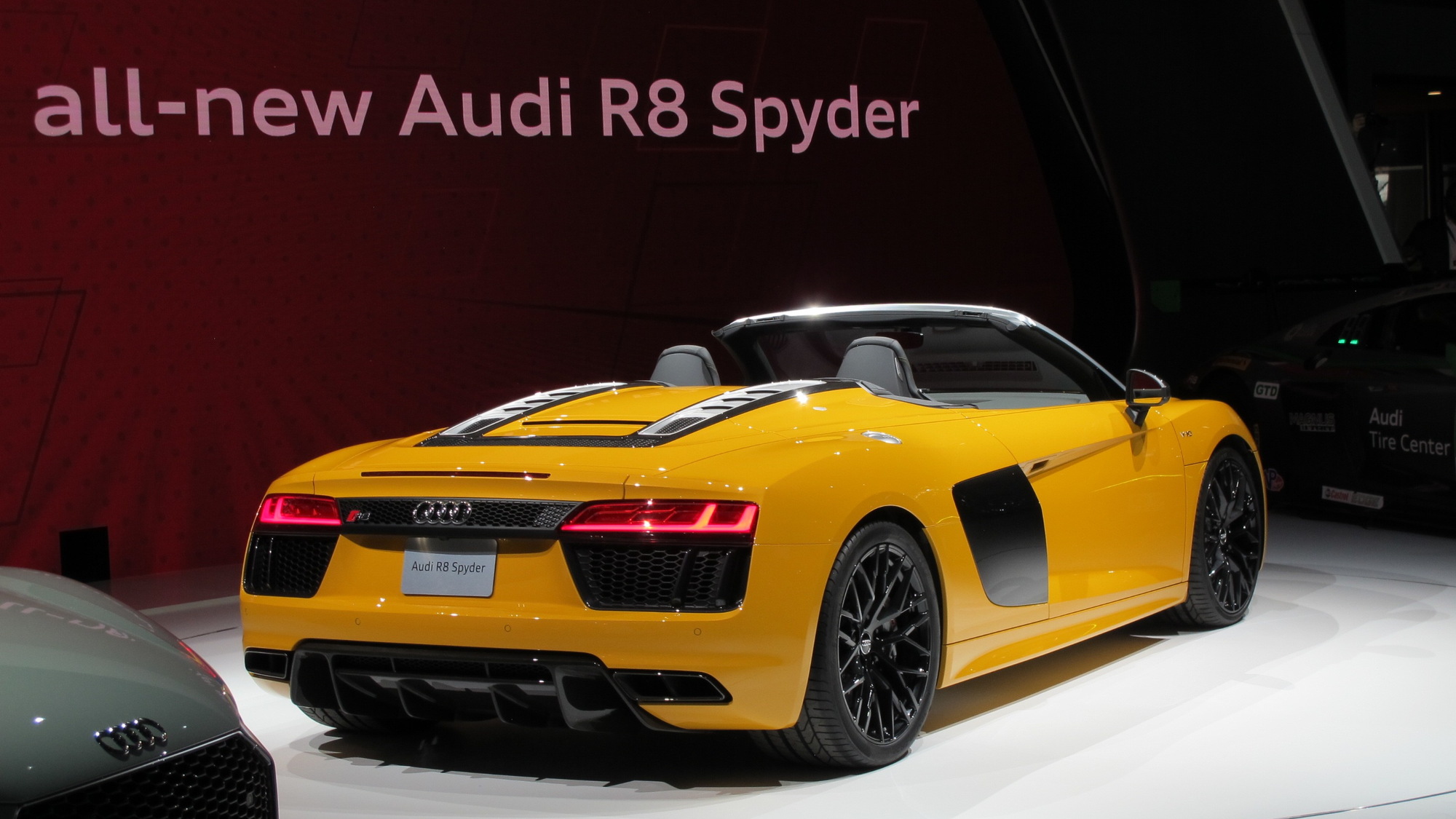 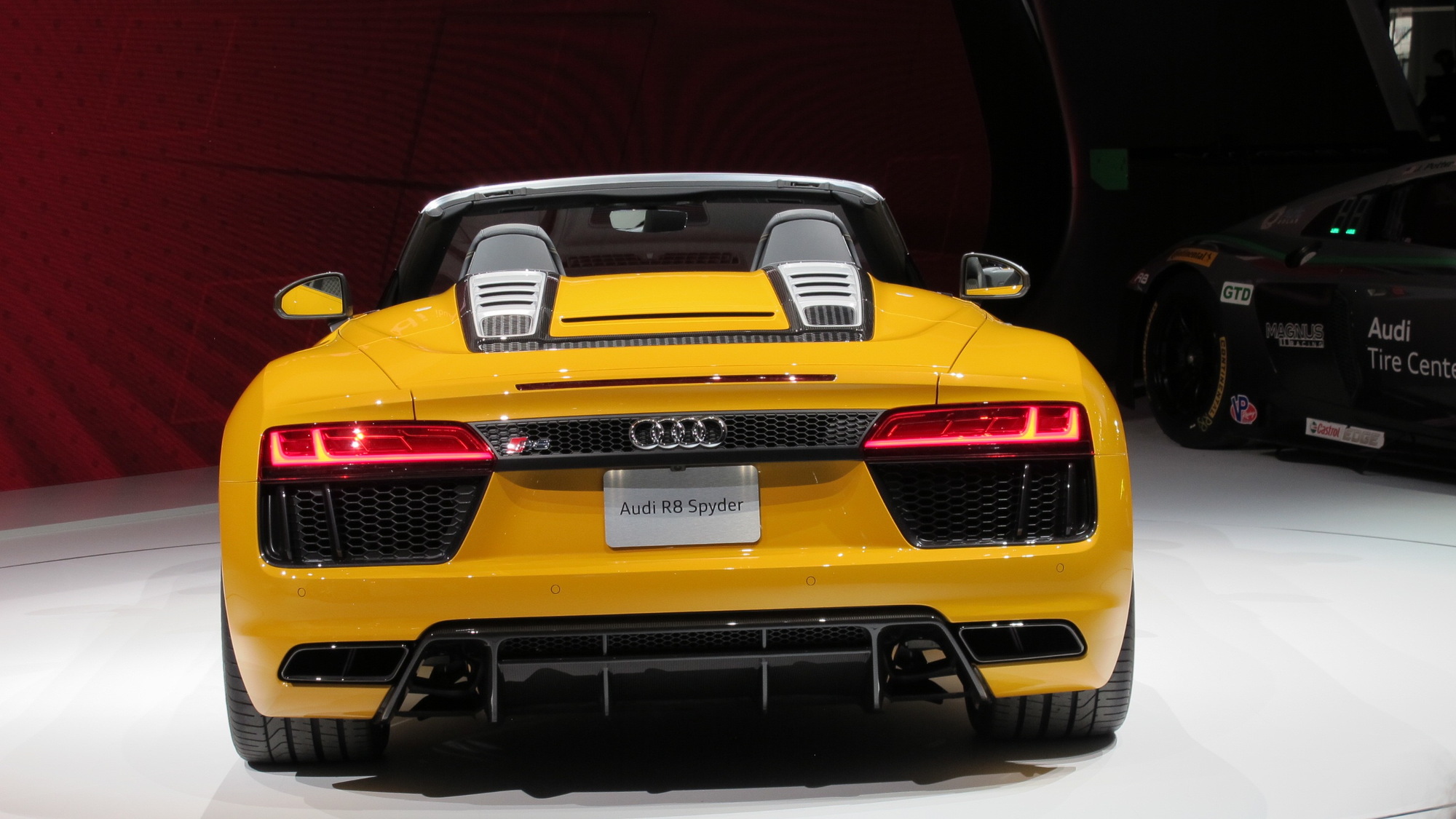 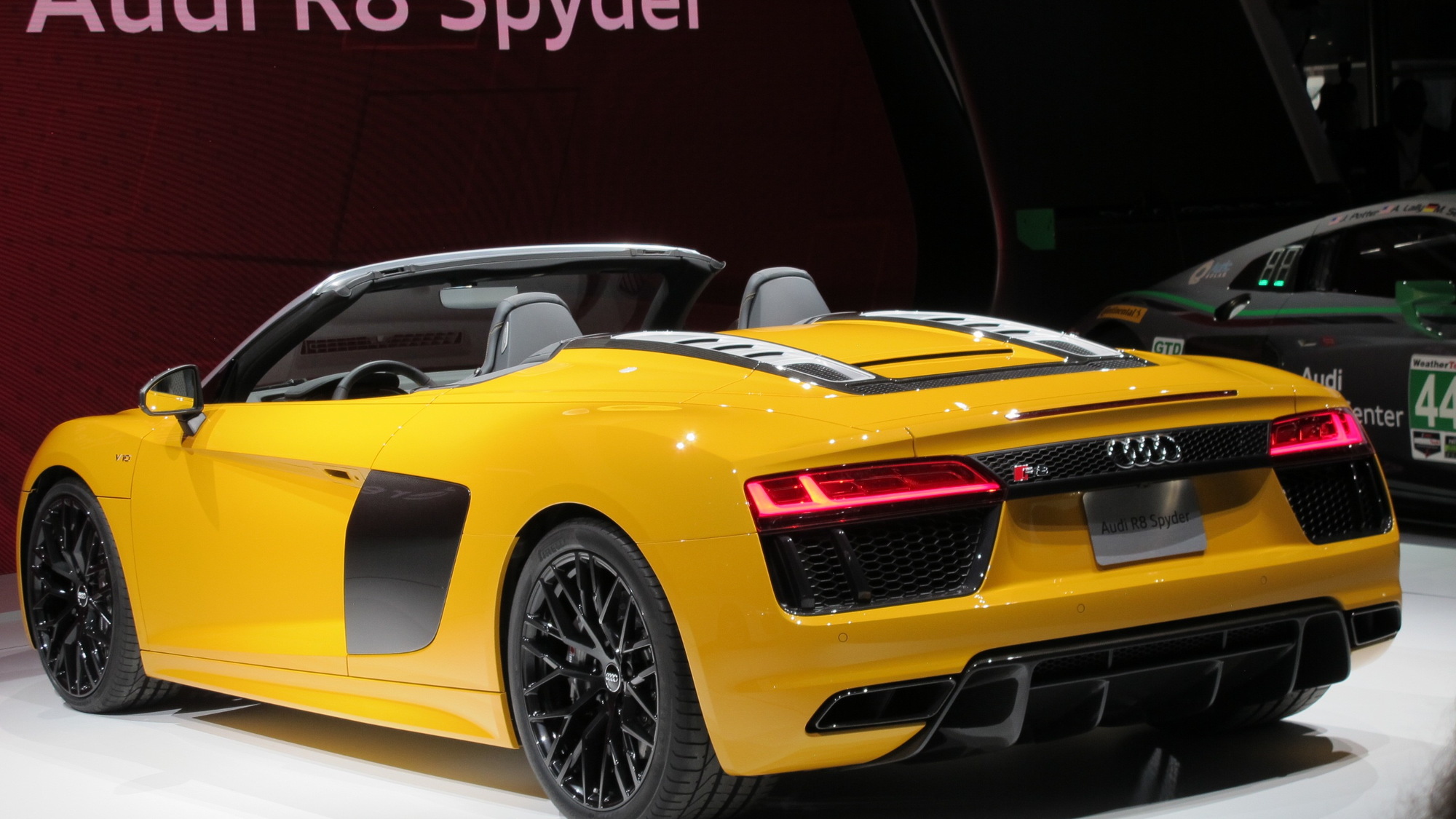 The open-top version of Audi’s second-generation R8 supercar made a surprise showing this week at the 2016 New York Auto Show.

Like the coupe, the open-top R8, officially labeled an R8 Spyder, now offers a V-10 engine only. However, here it only offers one output at present: 540 horsepower and 398 pound-feet of torque. In the coupe, you can order up a 610-hp version of the engine as well.

Nevertheless, no one is going to call the R8 Spyder a slouch. Even with the familiar 5.2-liter V-10’s lower rating, the R8 Spyder can sprint to 62 mph from rest in only 3.6 seconds. The top speed is a claimed 197 mph.

Aiding the performance is a 7-speed dual-clutch transmission and all-wheel-drive system. The latter is the latest version of Audi’s quattro. It features an electro-hydraulically activated multi-plate clutch which can divert as much as 100 percent of the drive torque to the front wheels if necessary. The driver is able to alter the characteristics of the system via a drive modes selector with four settings.

The most notable feature of the R8 Spyder, of course, is its foldable roof. To ensure the design is as light and compact as possible, the design team has gone with a lightweight cloth roof. It tapers into two fins at the rear to give the car a very sporty look. The roof needs just 20 seconds to fold and is operation at speeds of up to 31 mph.

In the cabin, the controls place the focus squarely on the driver, who can operate most of the important functions with the multi-function steering wheel. Audi’s top tech is standard, such as a digital instrument cluster and MMI interface. One new feature worth mentioning is a smartphone integration system. It makes it possible to display selected content from a smartphone directly in the instrument cluster. Audi says the feature will be added to the coupe in the middle of the year.

A market launch for the R8 Spyder is scheduled for early next year. Pricing should come at a slight premium to the $164,150 starting price of the coupe.

For more on the latest Audi R8, be sure to read our first drive review of the coupe. And for more from the New York Auto Show, head to our dedicated hub.