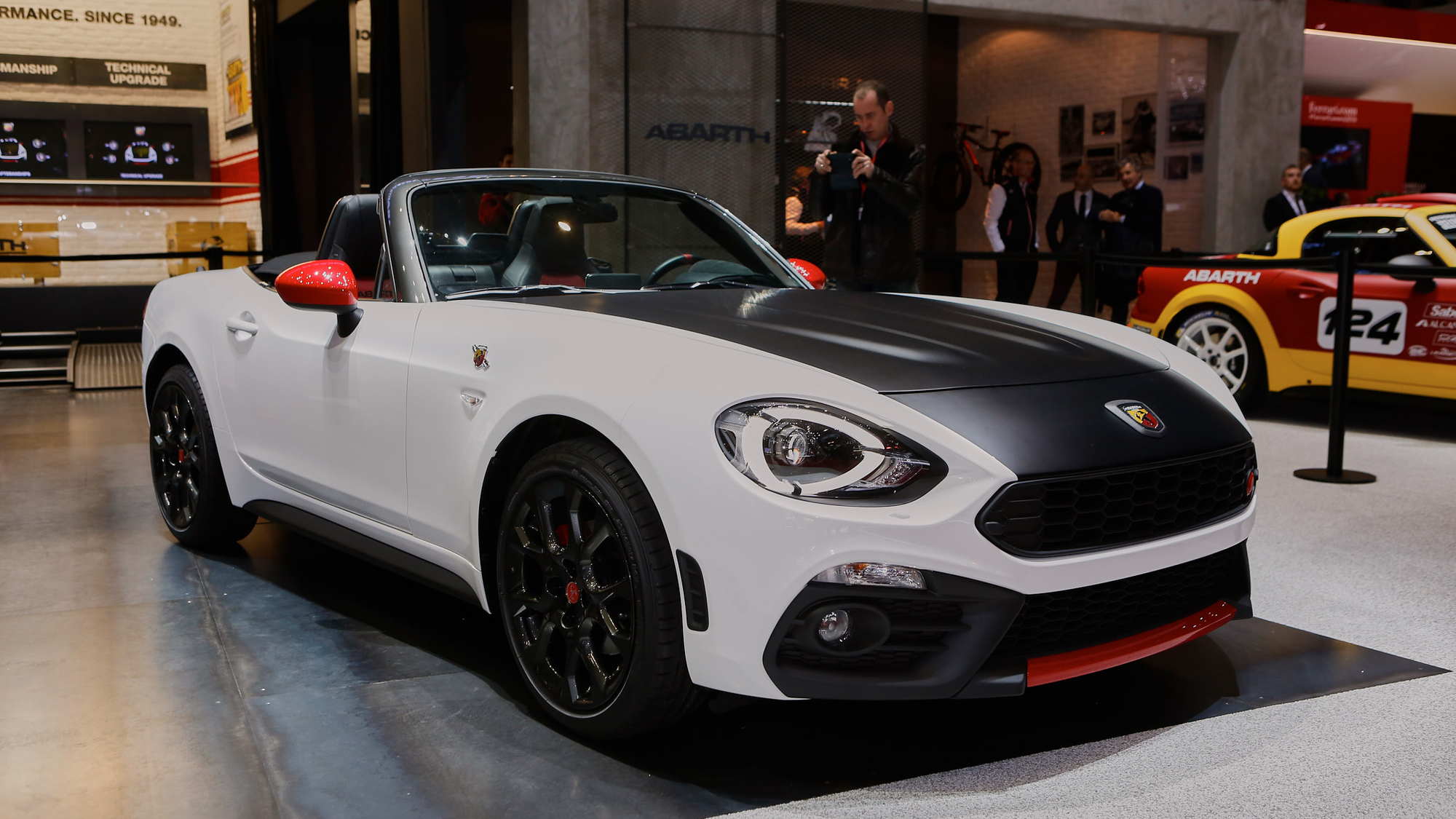 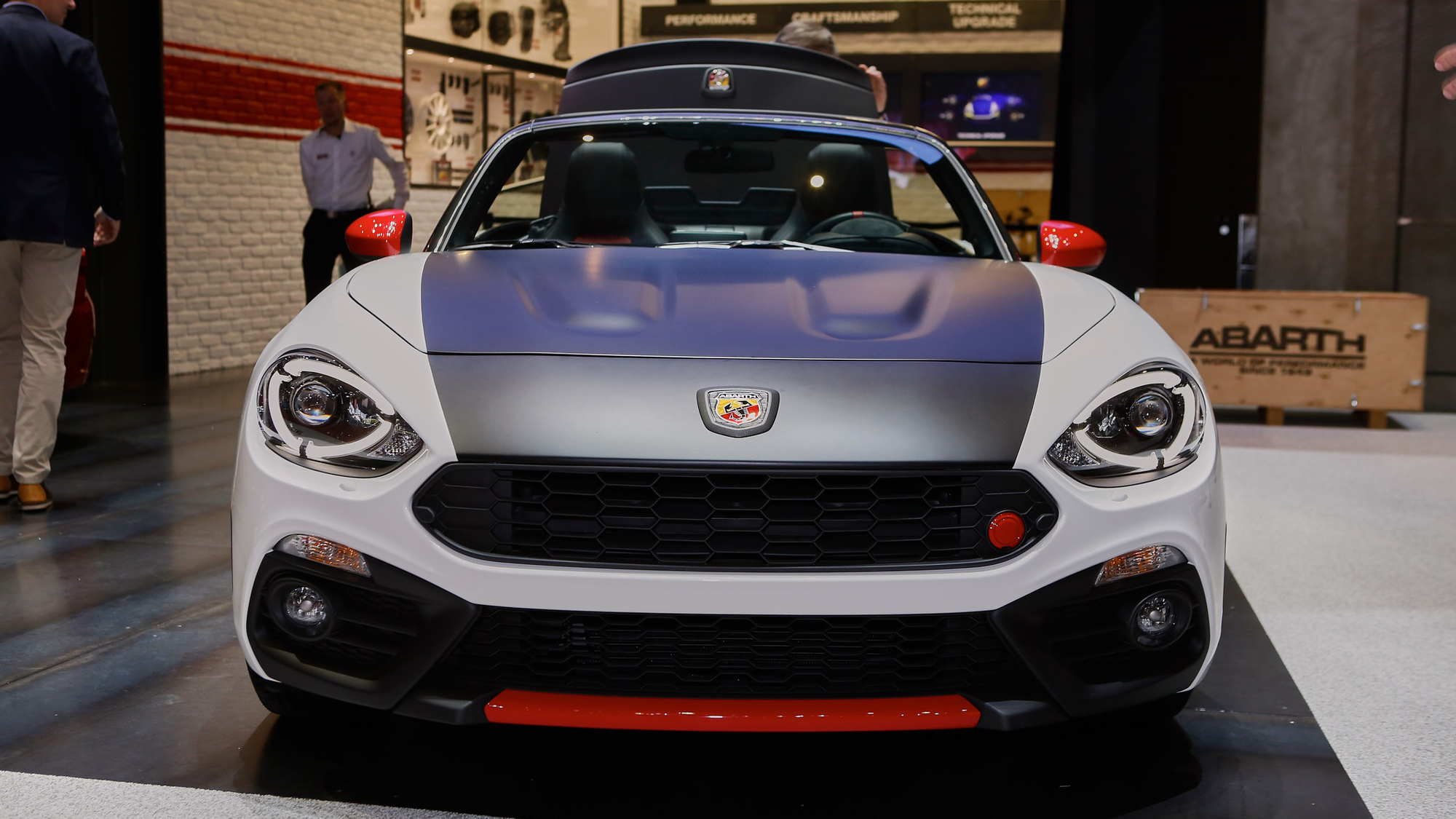 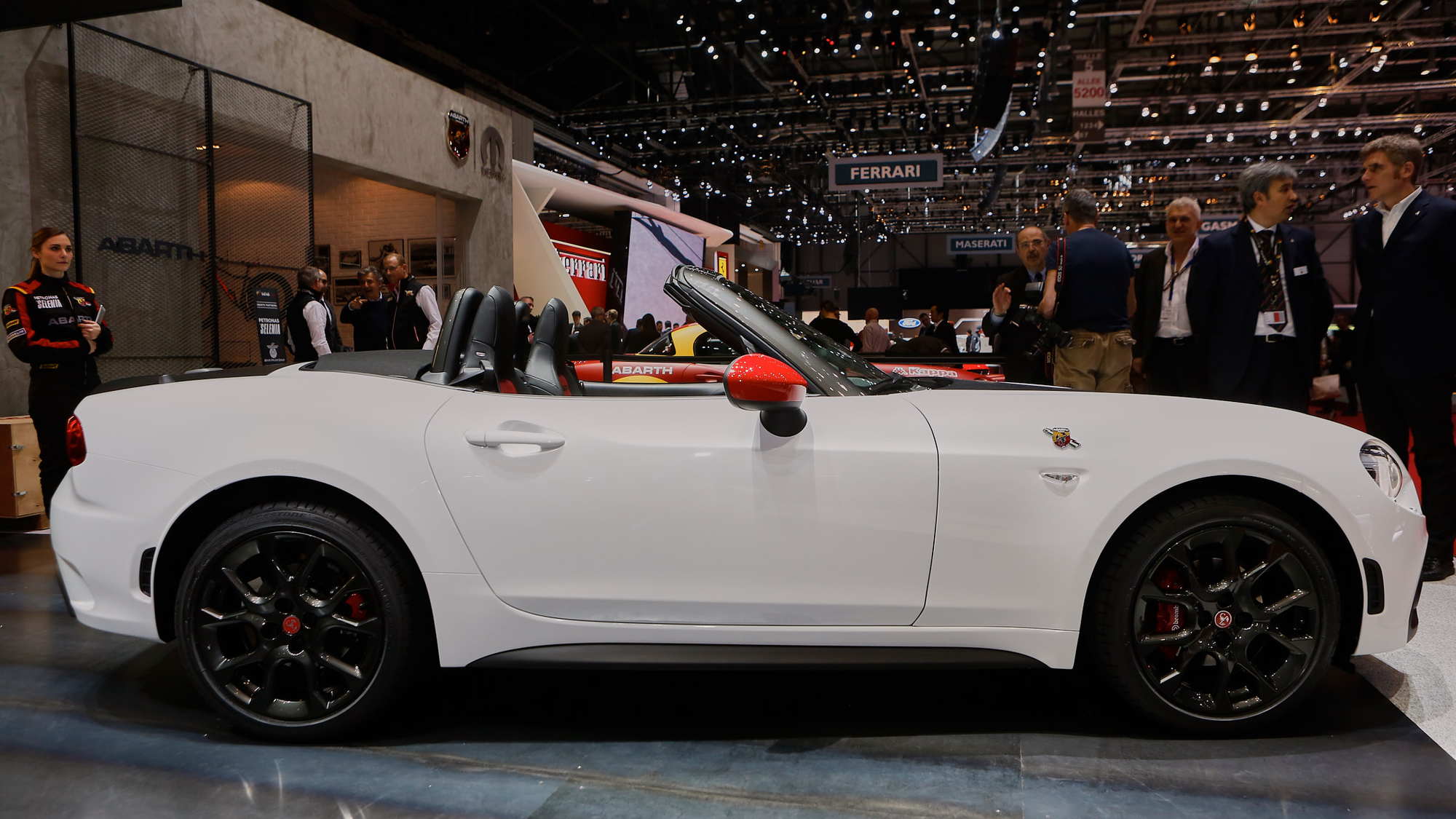 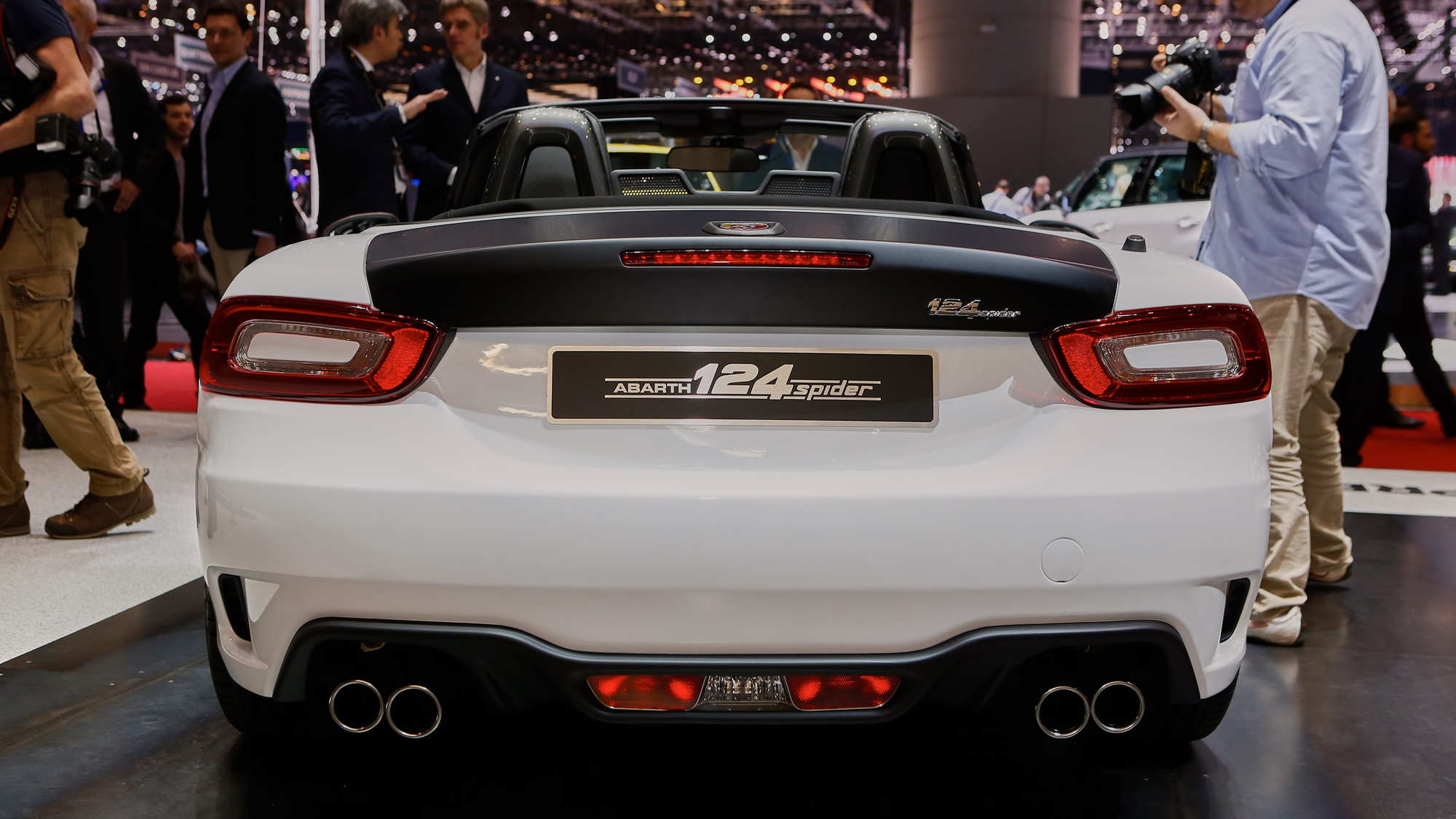 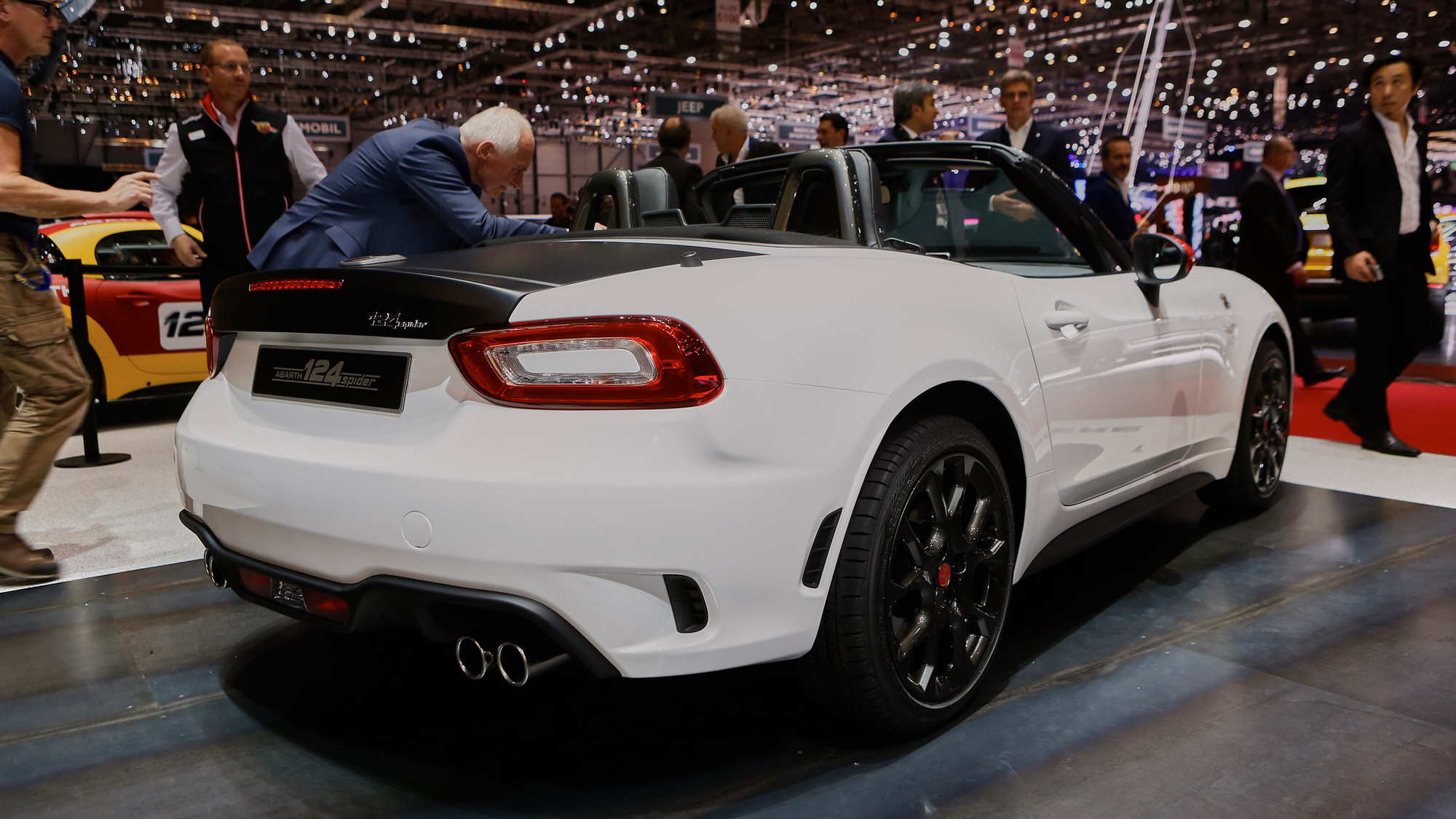 The Fiat 124 Spider is distinguished from its Mazda MX-5 Miata sibling by retro styling but now there's another difference that's more than skin deep. Mazda doesn't offer a Mazdaspeed version of the current MX-5 but Fiat set its in-house tuner and motorsports arm to work on the 124.

Debuting at the 2016 Geneva Motor Show, the Abarth 124 Spider is a hotter version of Fiat's new roadster. There's also a rally version built to FIA R-GT regulations that should hit the stages around the same time the Abarth 124 road car hits showrooms. Fiat plans to put the Abarth 124 Spider road car on sale in Europe by September, but the company hasn't discussed availability in the United States.

Under the hood is the same 1.4-liter turbocharged four-cylinder engine used in the standard 124 Spider. Power increases by 10 horsepower to a new total of 170 hp, while torque remains the same at 184 pound-feet. Six-speed manual and automatic transmissions are both available, and a standard Record Monza exhaust should give the little engine a nice growl. Fiat says the Abarth 124 Spider will do 0-62 mph in 6.8 seconds and reach a top speed of 143 mph.

Other upgrades include an upgraded suspension system with "Abarth by Bilstein" dampers, plus some Brembo brakes. The Abarth model also gets a mechanical limited-slip differential as standard equipment.

The Abarth 124 Spider is visually distinguished by more-aggressive bodywork that includes a new front bumper with larger air intake, a hood with power bulges, a redesigned rear bumper with air extractor, and a rear spoiler. The hood is also blacked out, and the Abarth rides on model-specific 17-inch alloy wheels. Fiat will offer five exterior colors with names like Turini 1975 White and Costa Brava 1972 Red that reference the carmaker's rallying history.

Speaking of rallying, Fiat also used Geneva to unveil its Abarth 124 Spider rally car, which as mentioned is built to FIA R-GT regs. While rally machines based on small convertible sports cars are unusual today, the original 124 Spider achieved some success in the World Rally Championship in the 1970s. Fiat clearly couldn't resist rekindling some of that old glory with the new Spider.

The rallying version of the Abarth 124 Spider ditches the stock 1.4-liter engine for a 1.8-liter four that produces 300 hp, and here the engine is coupled to a six-speed sequential gearbox. It's also mounted further back in the chassis and the car itself gets a fixed roof and a full roll cage. As with any other race car, the Abarth is also gutted and slathered with decals.

For more Geneva Motor Show news, head over to our dedicated hub.