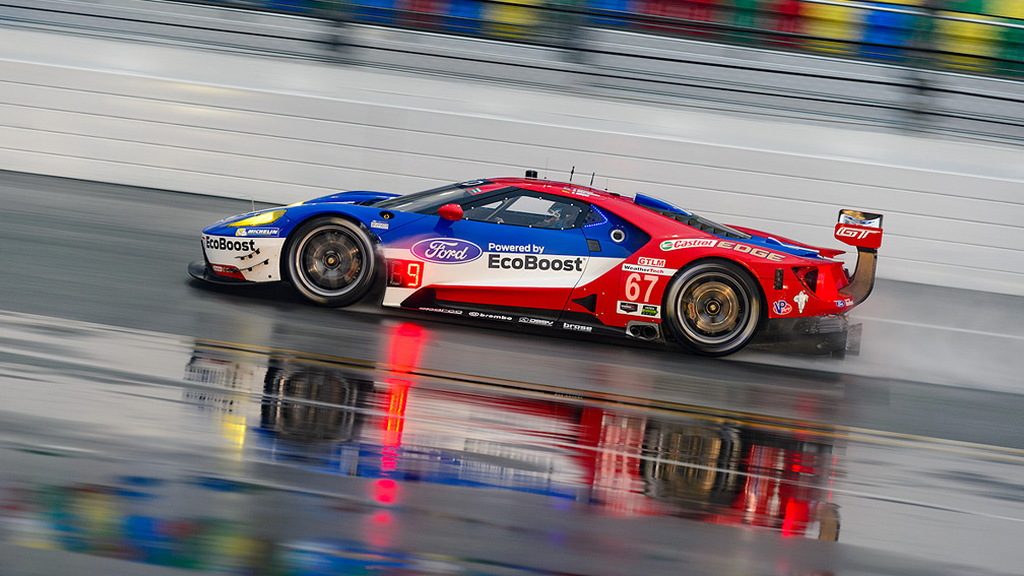 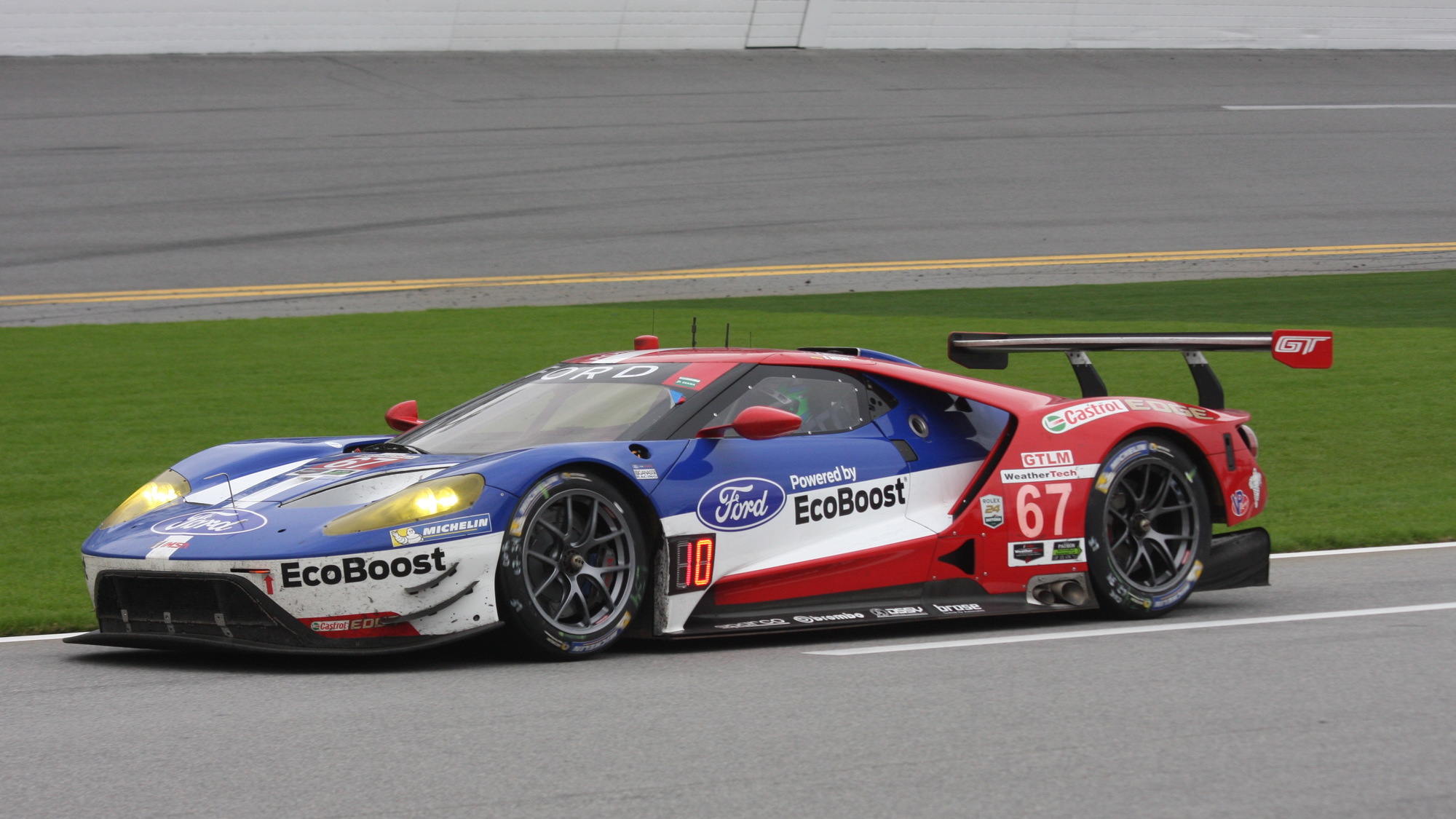 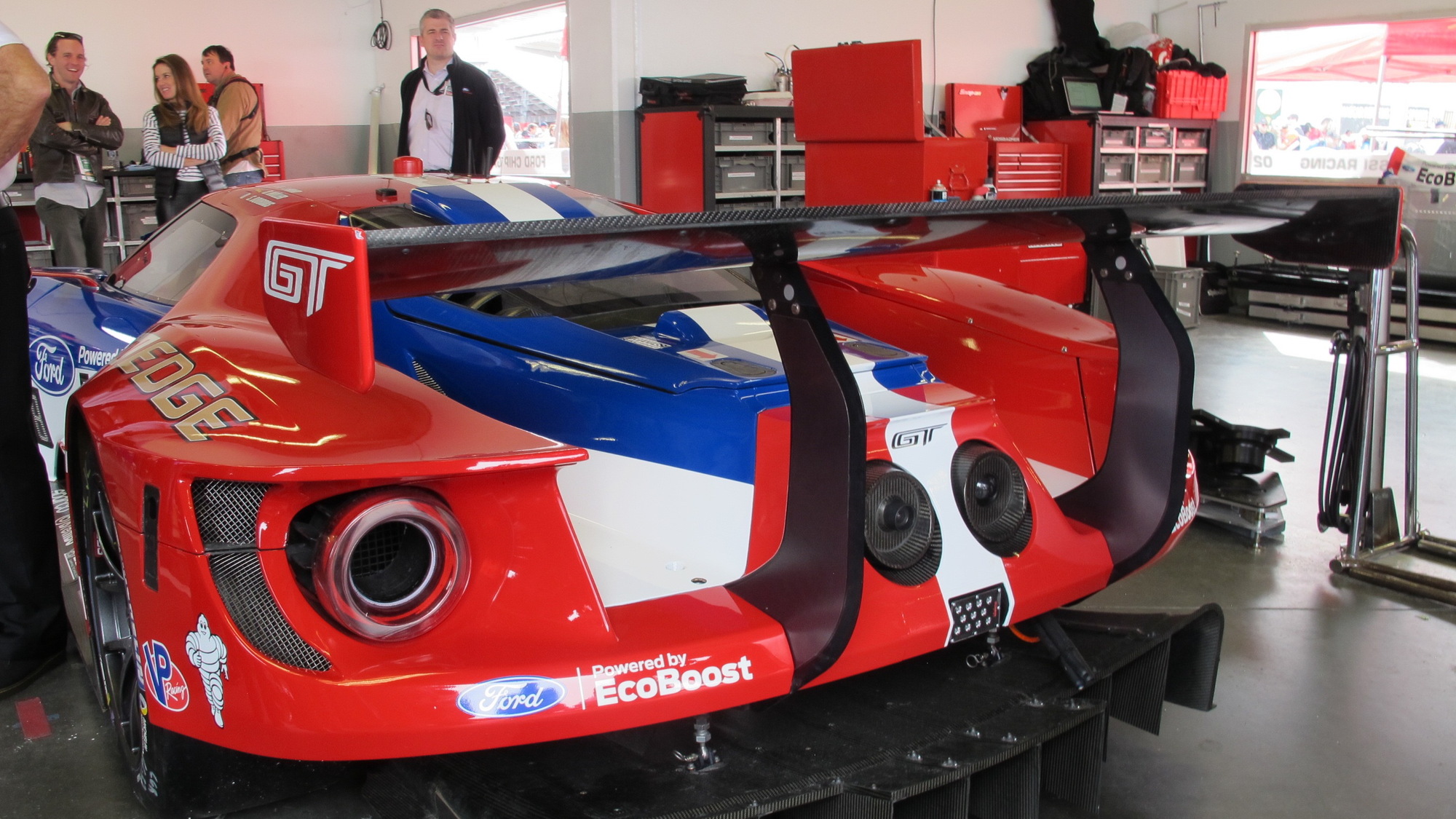 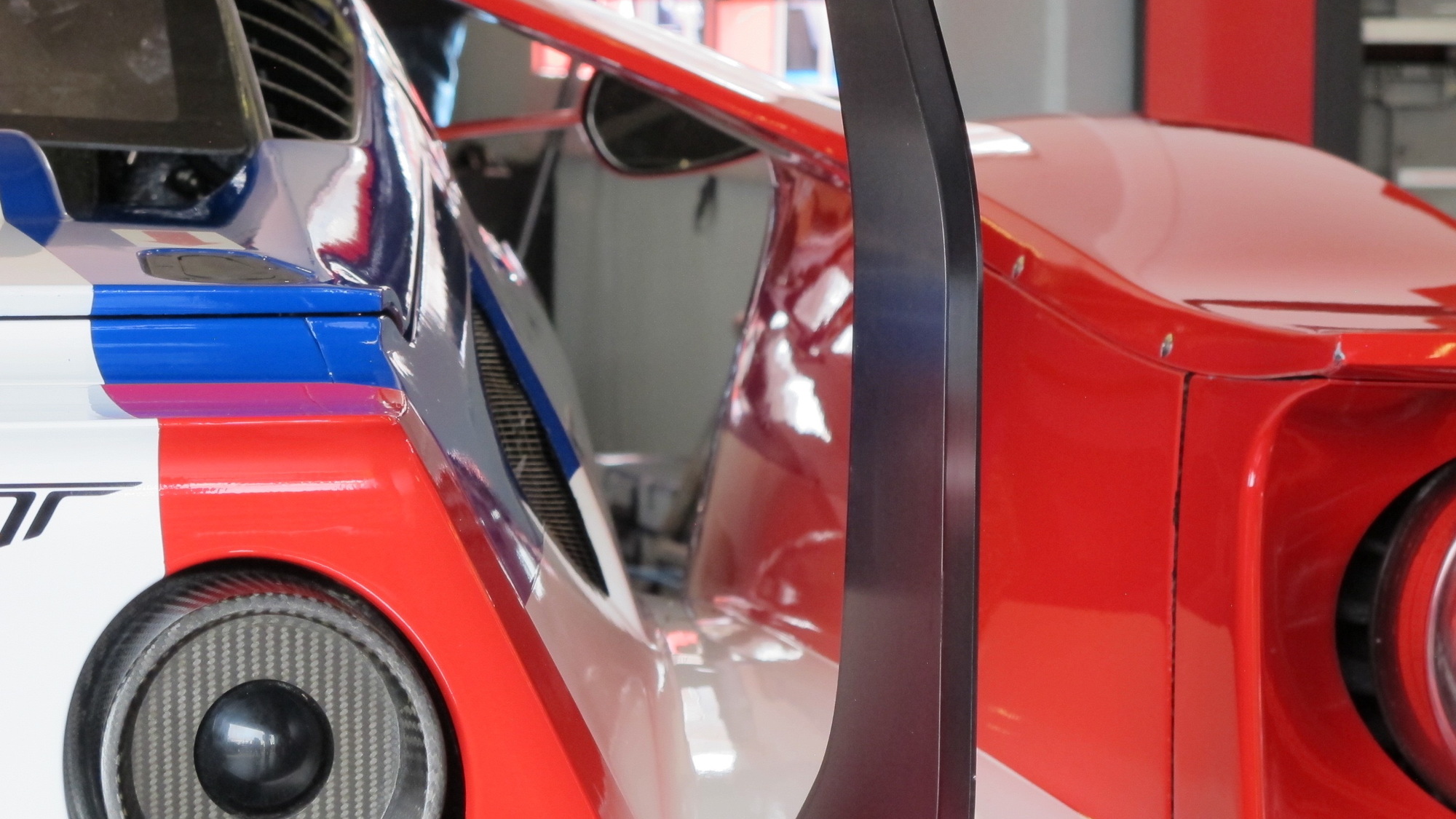 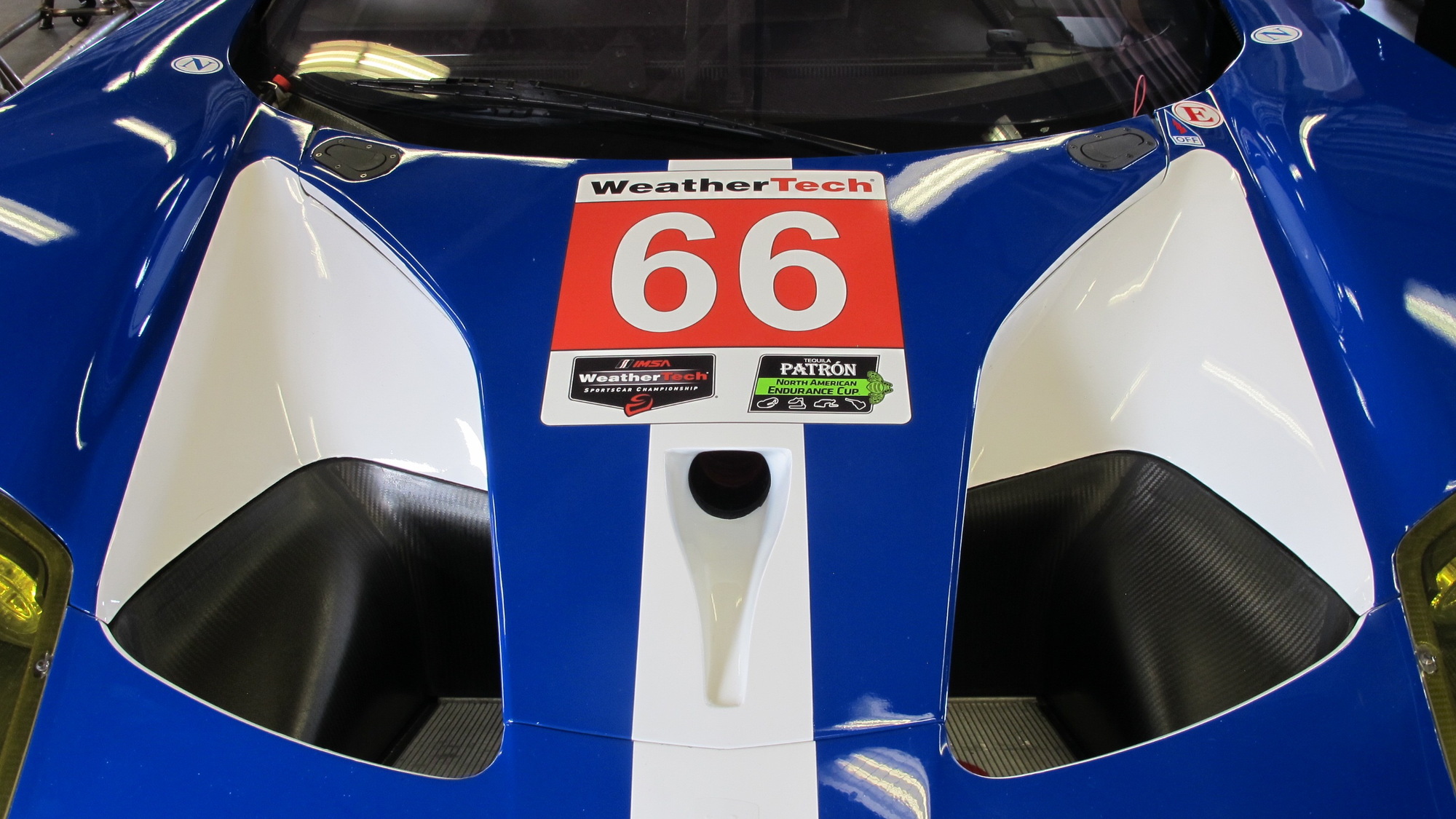 The most anticipated new car release of the year in enthusiast circles is the upcoming 2017 Ford GT. Built to compete in the 24 Hours of Le Mans 50 years after Ford posted a one-two-three finish at that hallowed race, the GT is a race car in street car guise.

Of course, it's also a race car, and several months before the production car hits the streets we've already seen the race car compete in the Rolex 24 At Daytona. I was there, and I finagled access to the car in the garage. I also got the chance to speak to Raj Nair, Ford's executive vice president, global product development, and chief technical officer, about the differences between the race car and the street car. Here is what I learned.

DON'T MISS: The Beginner's Guide To The Rolex 24 At Daytona: Mega Gallery

"First of all, there are very few differences," said Nair. "This is pretty close to a no-waiver car." A no-waiver car would have no changes from the production to car to make it competitive in a race series. The reason it is so close is that Ford designed the race car and the production car at the same time, knowing the rules for IMSA's GTLM class and the FIA's LM GTE Pro class.

Starting at the front, the headlamps are different as the production car has to meet Federal Motor Vehicle Safety Standards and the race car does not. The race car has three-bank headlamps that are considerably more powerful than the road car's twin stacked lights with LED signature lighting.

The aerodynamics are completely different between the two. Up front, the race car's lower grille sits flush, the front fascia is rounded off, the diffuser is unique, and winglets at the corners add more downforce. The street car also has an active rear spoiler that raises at speed and changes pitch when the brakes are applied to act as an airbrake. Active aero is illegal on the race car, so it has a much larger fixed rear spoiler, as well as a massive rear diffuser.

More cooling is needed for the race car, so it has NACA ducts in the center of the big nostrils on the hood and at the front of each rear fender.

Inside, the interior is stripped and fitted with a single seat instead of two seats. It also has a racing steering wheel, racing controls, and racing displays and gauges.

The tub is common to both cars. The suspension geometry is basically the same, though final suspension calibrations for camber, caster and other factors are optimized for racing. The race car also sits lower, and uses some sold-mount bushings that would hurt ride quality in the production car. An active suspension will be used on the street car, but that is not allowed for racing, so the race car uses Dynamic Suspensions Spool Valve (DSSV) dampers, which were developed by Mulitmatic Motorsports, the company that is building both the race and road-going versions of the GT for Ford. The race car also runs racing slicks on unique wheels, and its brakes are iron instead of the carbon ceramics of the street car.

Each car handles airflow through the engine differently. The street car's intake is down by the rocker panels and the exhaust is routed out the back in two pipes located in the center of the fuselage at the rear. The race car doesn't need a muffler or catalytic converter, and that changes the exhaust packaging. It also operates at consistently higher speeds, so a ram air system will work. The ram air scoop is located on top of the race car and the exhaust exits in the most efficient path, which is in front of the rear wheels.

"On a production car, ram air is helpful, but it's also hard to calibrate for low speed, for idle, for the differences in ram pressure," said Nair. "For a race car all you care about is horsepower. You don't need to worry that it will have a little bit of a rough idle when it's stopped in the pit." Nair also noted that the race car rarely goes slow, when ram air would have little effect.

Since the street car's exhaust outlets aren't needed on the race car, Ford adds a rearview camera to one side and a rear radar system to the other. The radar indicates the range and closing speed of cars behind.

Ford's 3.5-liter twin-turbocharged EcoBoost V-6 will actually make more power in the street car. The block, crankshaft, rods, and pistons are all the same, but the race car doesn't need to meet emissions standards or last 100,000 miles. The street car's turbos need to be able to spool up faster because it will be at low speeds more often, while the race car is more concerned with max boost. The street car will also never run a restrictor plate. Ford says the production car will make more than 600 horsepower, while the race car makes about 500 horsepower.

Ford introduced the 3.5 EcoBoost V-6 as a production engine, then raced it, and applied what it learned there to bring it back as a 600-plus horsepower production engine for the GT. "Some hardware that we wanted to bring into production in '17 and '18, we had running on the race car in '15," said Nair.

Racing it over the last two years also gave the GT a leg up in competition because it wouldn't run an all-new engine. "If we were going to race a GT to try to celebrate the anniversary, rather than an all-new car and an all-new engine, we would at least have the base powertrain proven out," Nair explained.

While there are plenty of differences, GT buyers will get a race-bred beast. "More so than any car on the grid, there is a lot that is exactly the same on the production car as the race car," said Nair.

If only I could be one of those buyers.