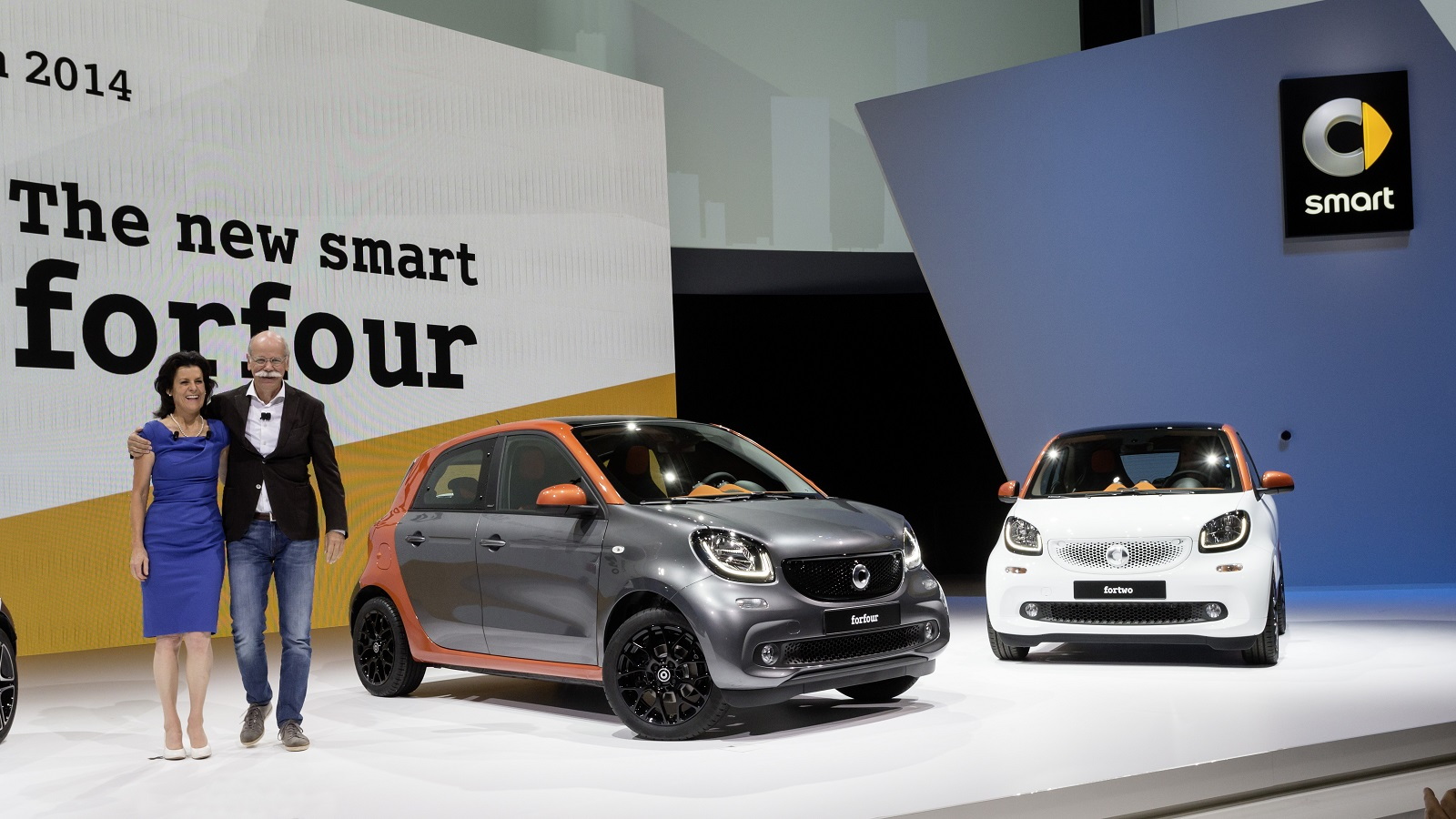 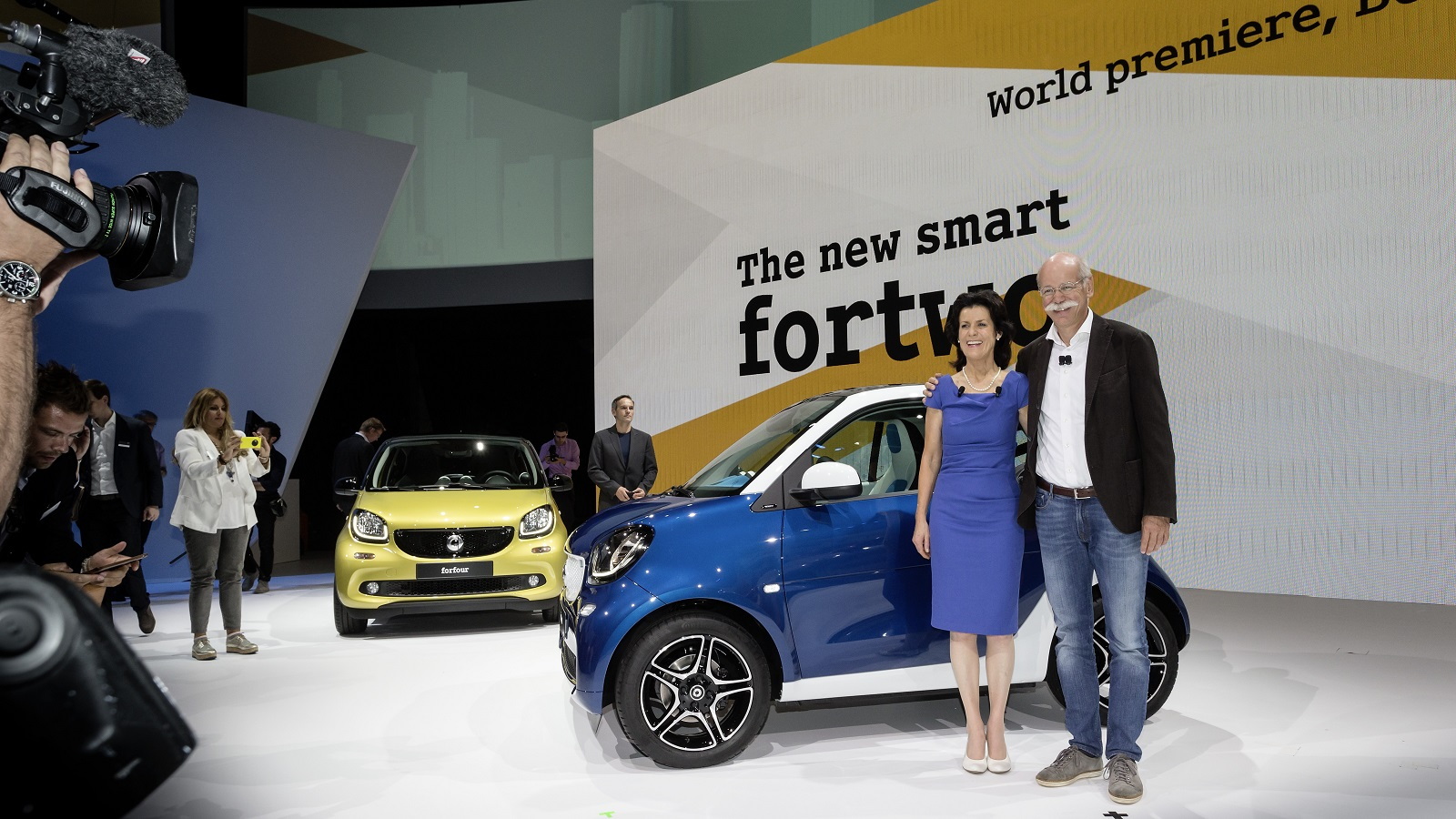 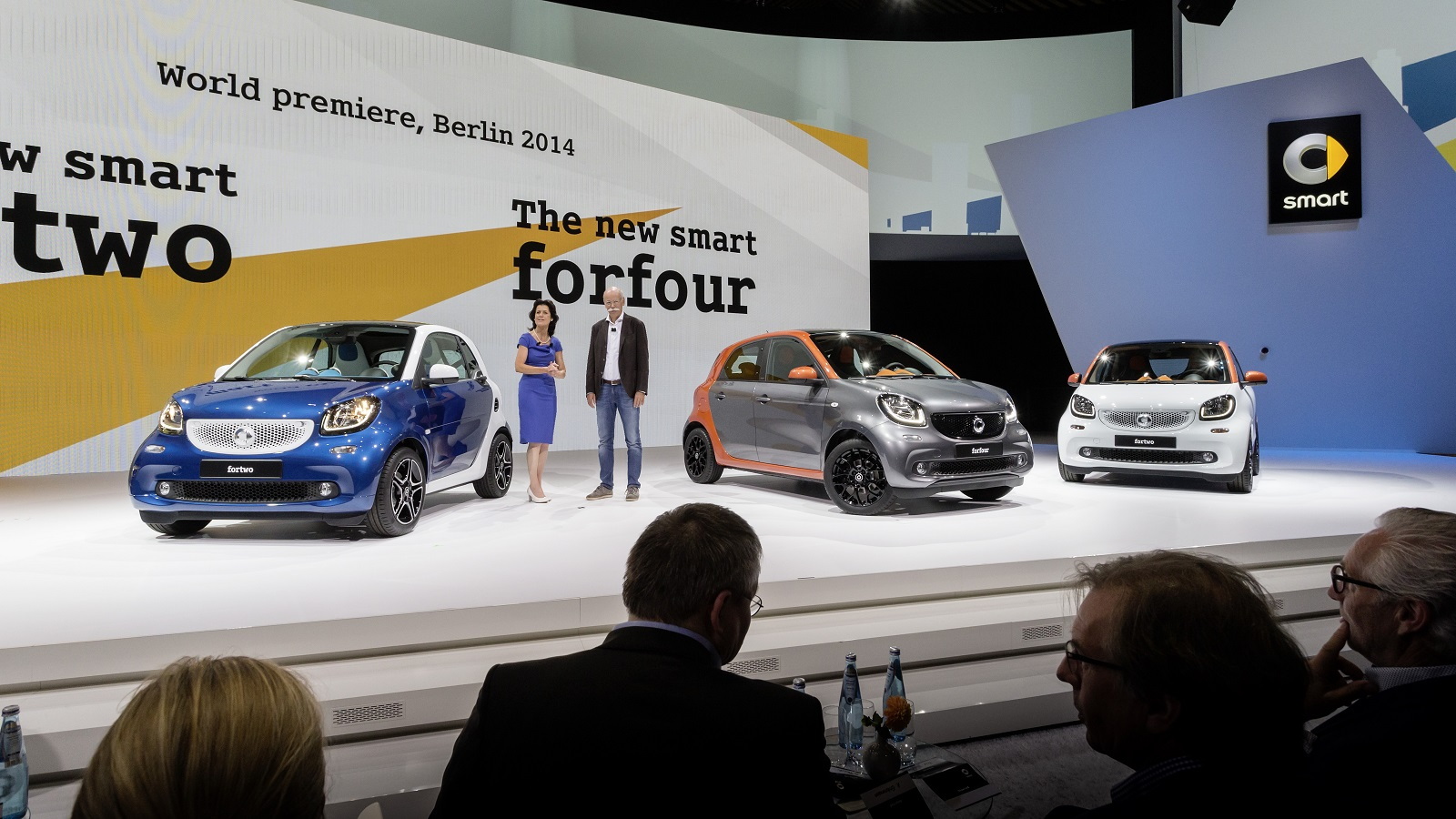 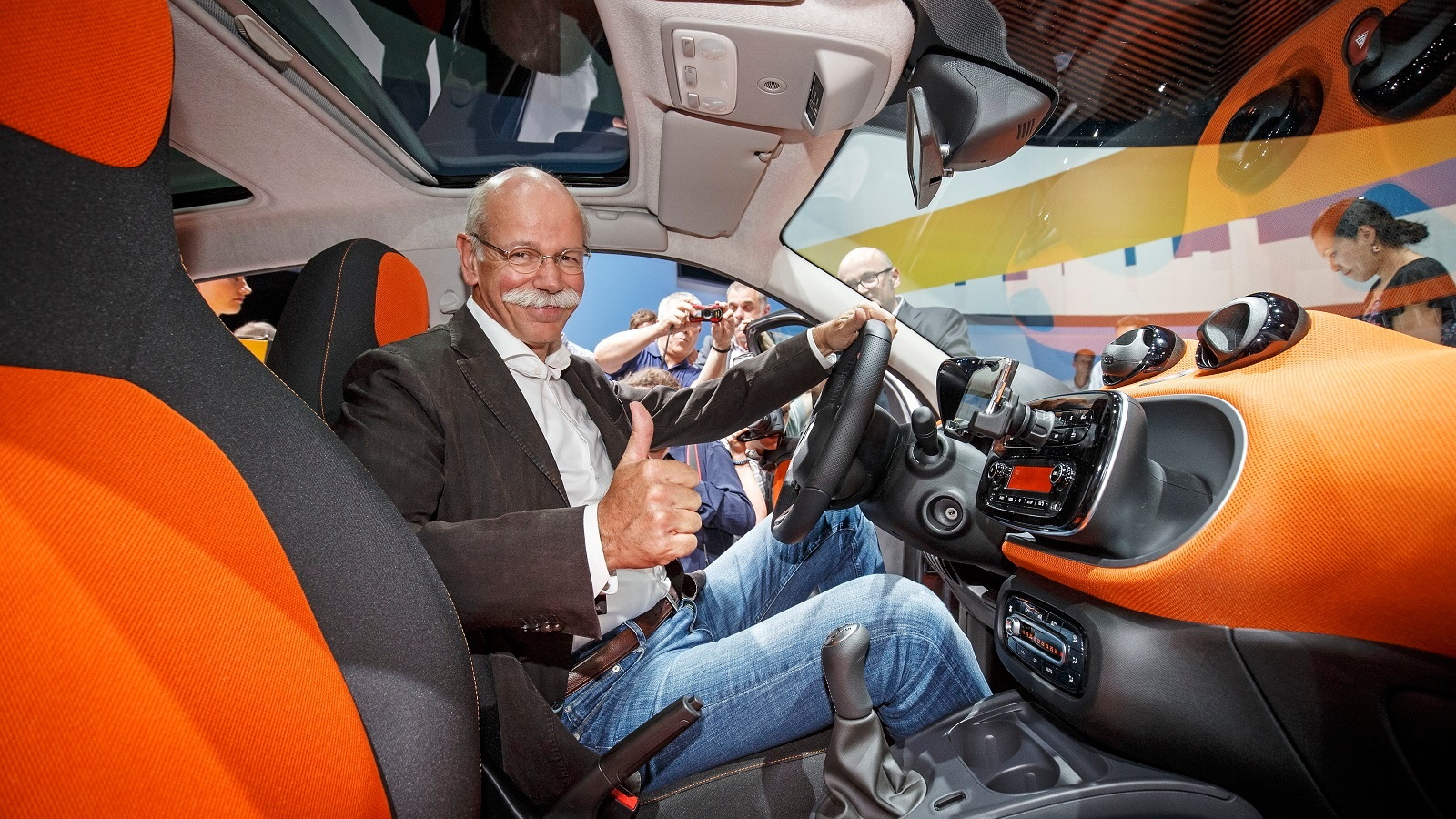 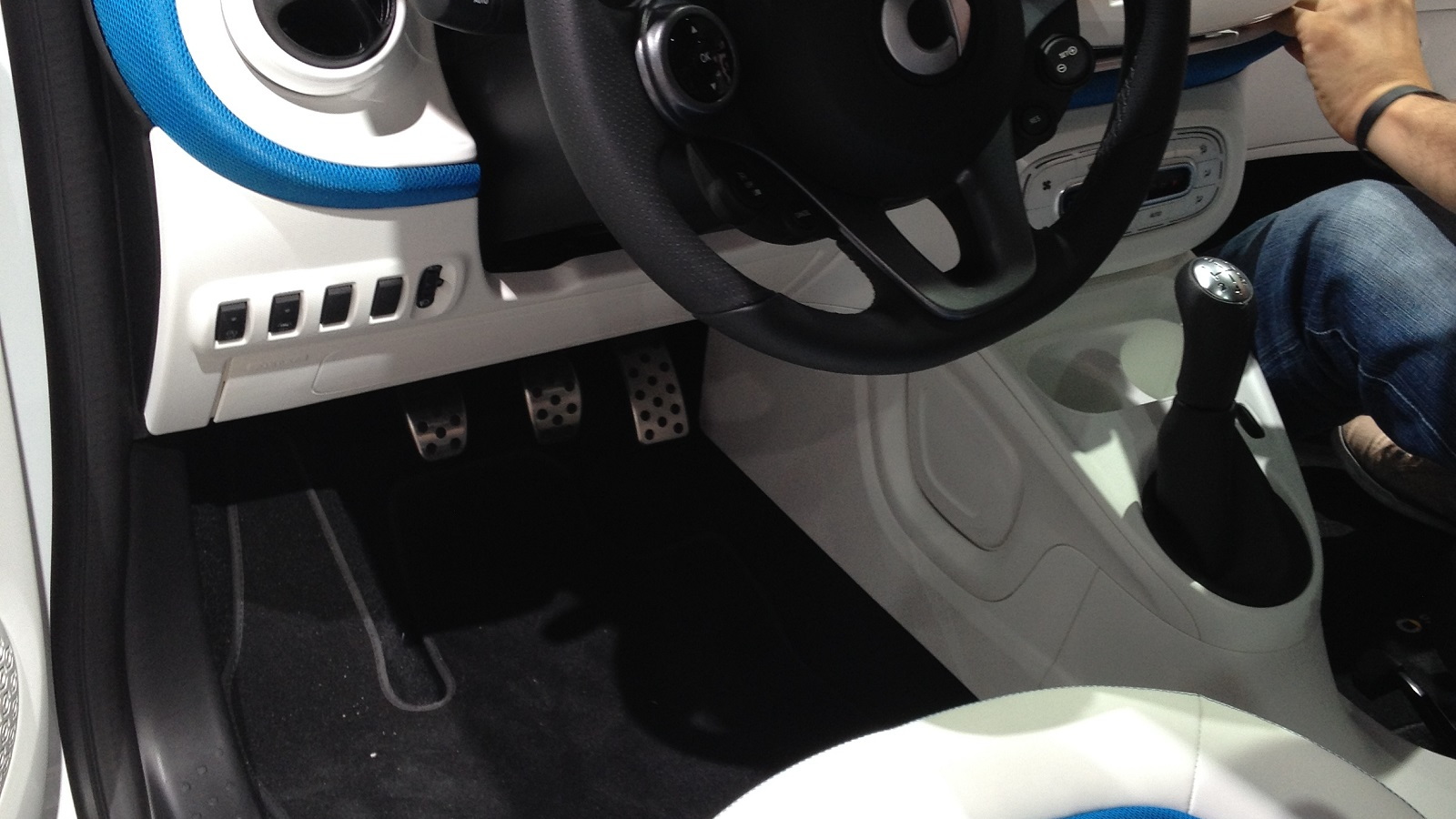 68
photos
German auto giant Daimler has taken the wraps off the latest version of its smallest car, the all-new 2016 Smart ForTwo. This time, however, the four-door variant has made a comeback, with Smart also introducing a new ForFour overnight. The tiny duo was presented at a special event in Berlin, where Daimler CEO Dieter Zetsche and the head of Smart Annette Winkler were on hand to unveil the cars.

At present, only the new ForTwo has been confirmed for the U.S. market. It will arrive sometime next year, as a 2016 model. Europe will get both the new ForTwo and ForFour models this November. In Europe, the ForTwo will be priced less than 11,000 euros (approximately $14,875), while its four-door sibling will start at just 600 euros more ($811). U.S. pricing and specifications will be announced closer to next year’s sales launch.

The platform of the new Smart range retains the brand’s rear-engine, rear-wheel-drive concept and Daimler alliance partner Renault has already used it for its latest Twingo (the French automaker will also manufacturer the ForFour, while Smart will manufacture the ForTwo). Importantly, the platform has undergone improvements in virtually all areas, especially refinement and comfort—a harsh ride was one of the major downsides of the previous generation.

While the Smarts will offer buyers in most markets a choice between three three-cylinder engines, all of them gasoline units, in the U.S. we’ll only get a single unit, good for 90 horsepower and 100 pound-feet of torque. That engine will be mated to either a five-speed manual or an all-new dual-clutch transmission called a Twinamic. Further down the track, a new generation of the Smart ForTwo electric drive should be launched.

In the area of safety, the new Smart cars come with a blind-spot monitoring system as standard as well as a driver airbag, driver kneebag and front passenger airbag. Each seat also comes with a three-point seat belt with belt force limiter and pyrotechnic belt tensioner as standard. Forward collision warning and lane-keeping assist will be optional. Finally, the highly robust tridion passenger cell (still visible from the outside) is able to prevent major deformation even in very severe collisions. And for additional safety, the gas tank is located safely outside the deformation zone in front of the rear axle.

For a more in-depth look at the new Smart Fortwo and ForFour, head to our sister site Green Car Reports.