The push for more efficient vehicles is leading automakers to develop new and ingenious ways to save fuel--without detracting from the driving experience of their vehicles. Many of these systems operate without the driver ever knowing anything is happening--which is just how Mercedes's new Intelligent Hybrid system will work.

Existing hybrid setups are fairly unintrusive of course, but many are compromised by not knowing what the road in front of you will hold. Hybrids rely on features like regenerative braking to recuperate kinetic energy, charging the car's battery pack for use further down the road. Such systems have limits though--when a pack is fully charged, the regenerative effect can decrease, meaning you have to brake harder, wasting energy. At other times, your last period of regenerative braking may not have charged the batteries up enough to assist on a large hill--again, requiring extra fuel to shove you along.

By monitoring the road ahead using data from the COMAND navigation system, Intelligent Hybrid ensures that the battery is only charged sufficiently for the terrain ahead. If you're approaching a long downward slope in the next few miles, for example, the car knows it'll soon receive a full charge from the kinetic energy of traveling downhill. The system can assign more electric power to the motor in the meantime--giving less work for the engine to do, therefore saving fuel and producing lower emissions. 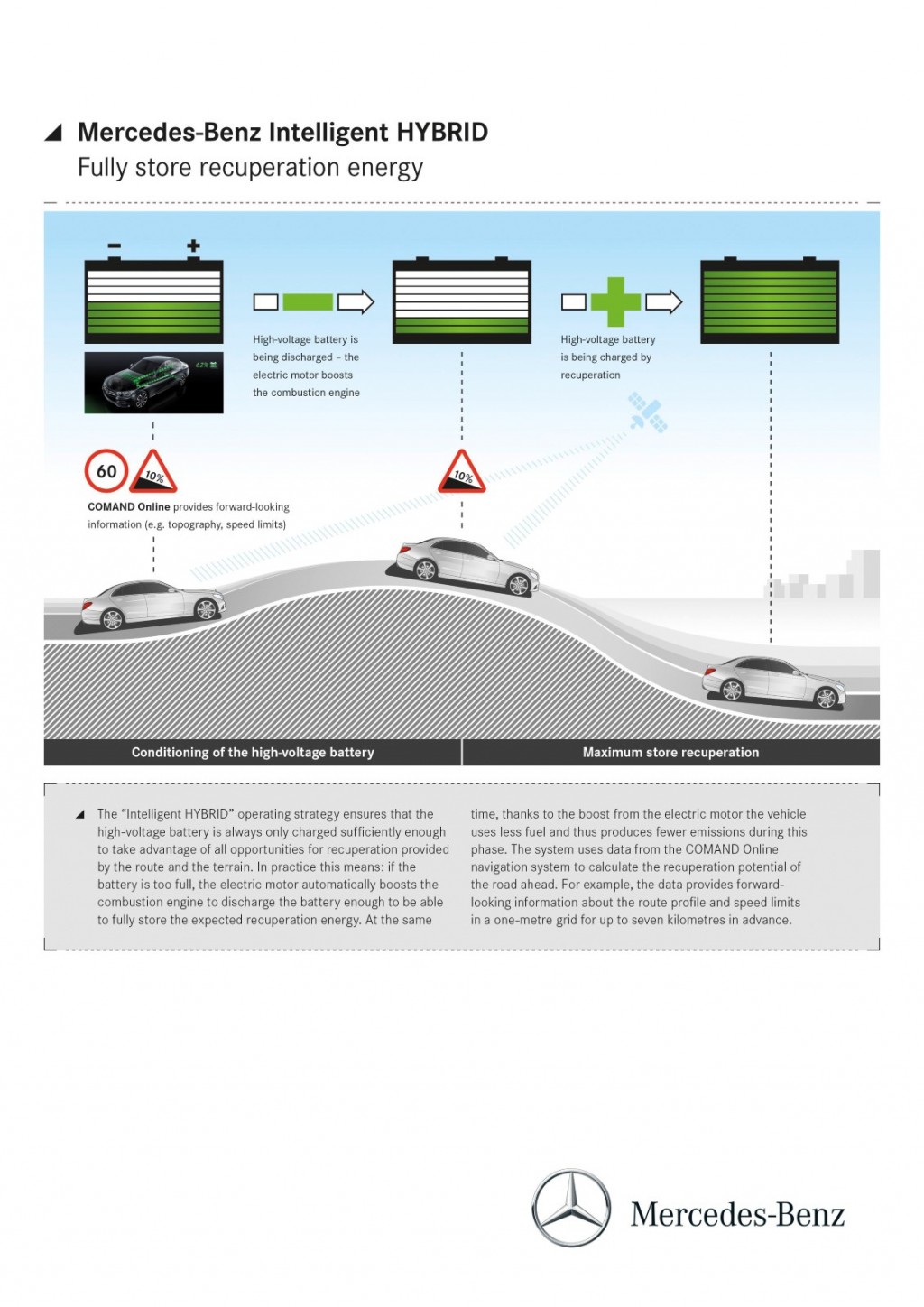 It isn't the first time we've seen navigation-assisted systems in a car--Rolls-Royce debuted a transmission in the Wraith coupe that uses navigation data to assist with assigning the correct gear. Should a driver be approaching a downhill corner and need a little help slowing down, the car will already have selected a lower gear for greater engine braking. If it knows you're in a sequence of corners, it won't change up needlessly in the middle of a turn.

This is the first time we've seen a navigation-assisted hybrid setup though, and it could prove a real fuel-saver for future Mercedes hybrid buyers. The company notes that drivers in more mountainous regions will save the most, as the car is best able to apportion electric power given the topography ahead. It's already available on hybrid S-Class models, and is coming to the smaller C-Class soon.

In general, Mercedes attributes its increasing hybrid expertise on its Formula One program. 2014 is proving a highly fruitful year for the company's F1 team, with victories in all three races so far. While true parallels between Formula One and road-going vehicles are slim, F1's increasing focus on hybridization has certainly led to efficiency gains for the company's road cars.