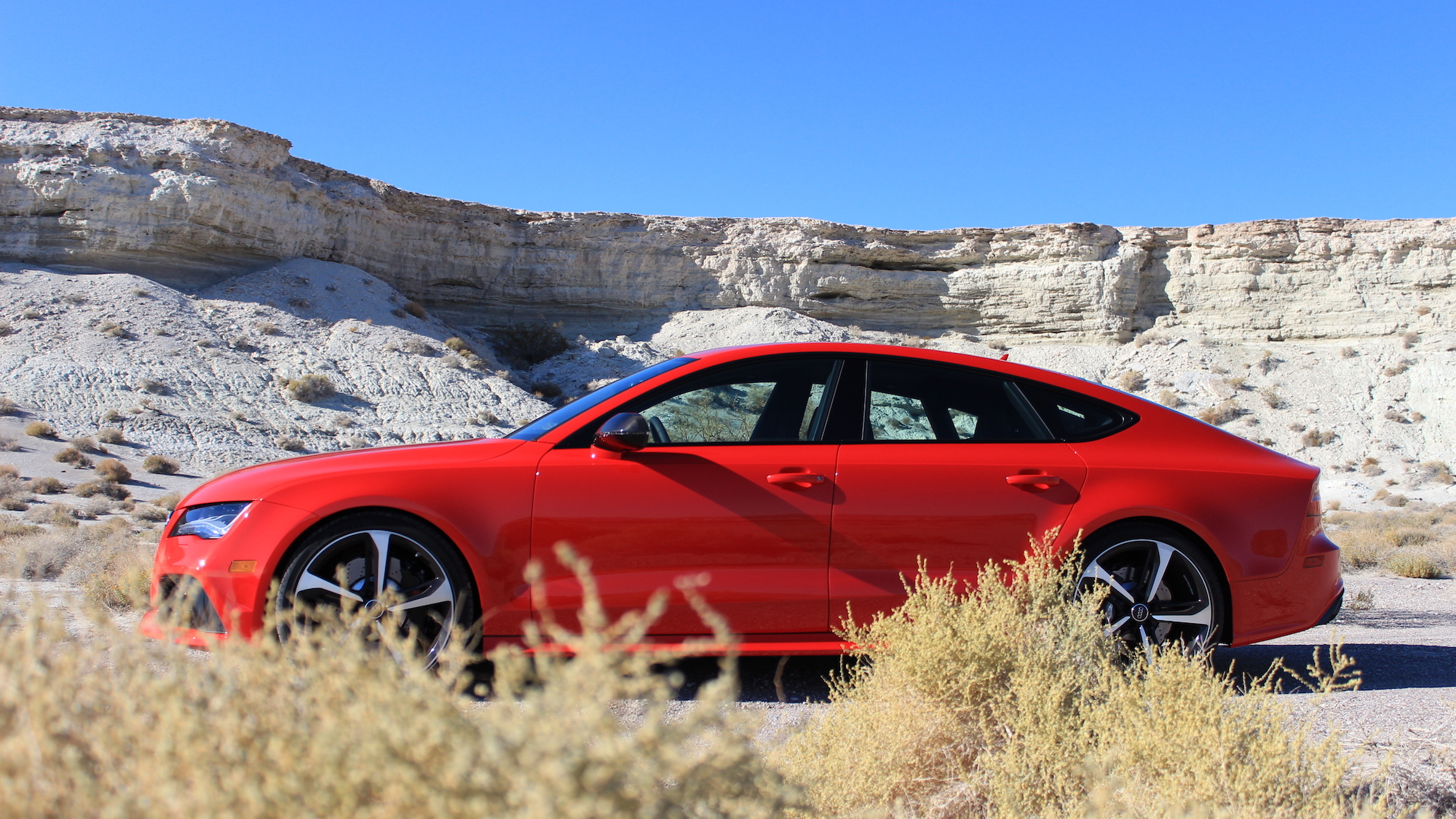 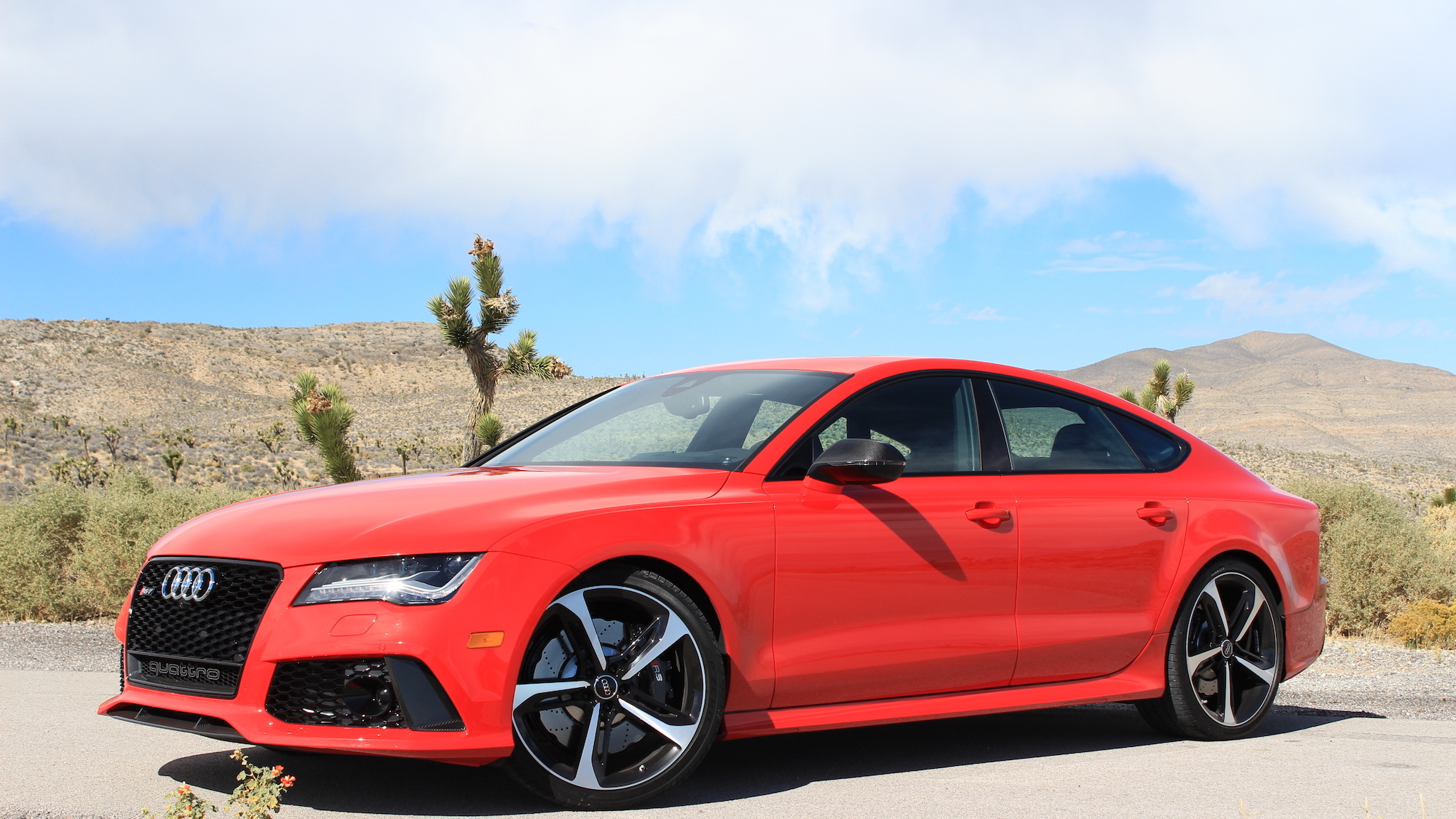 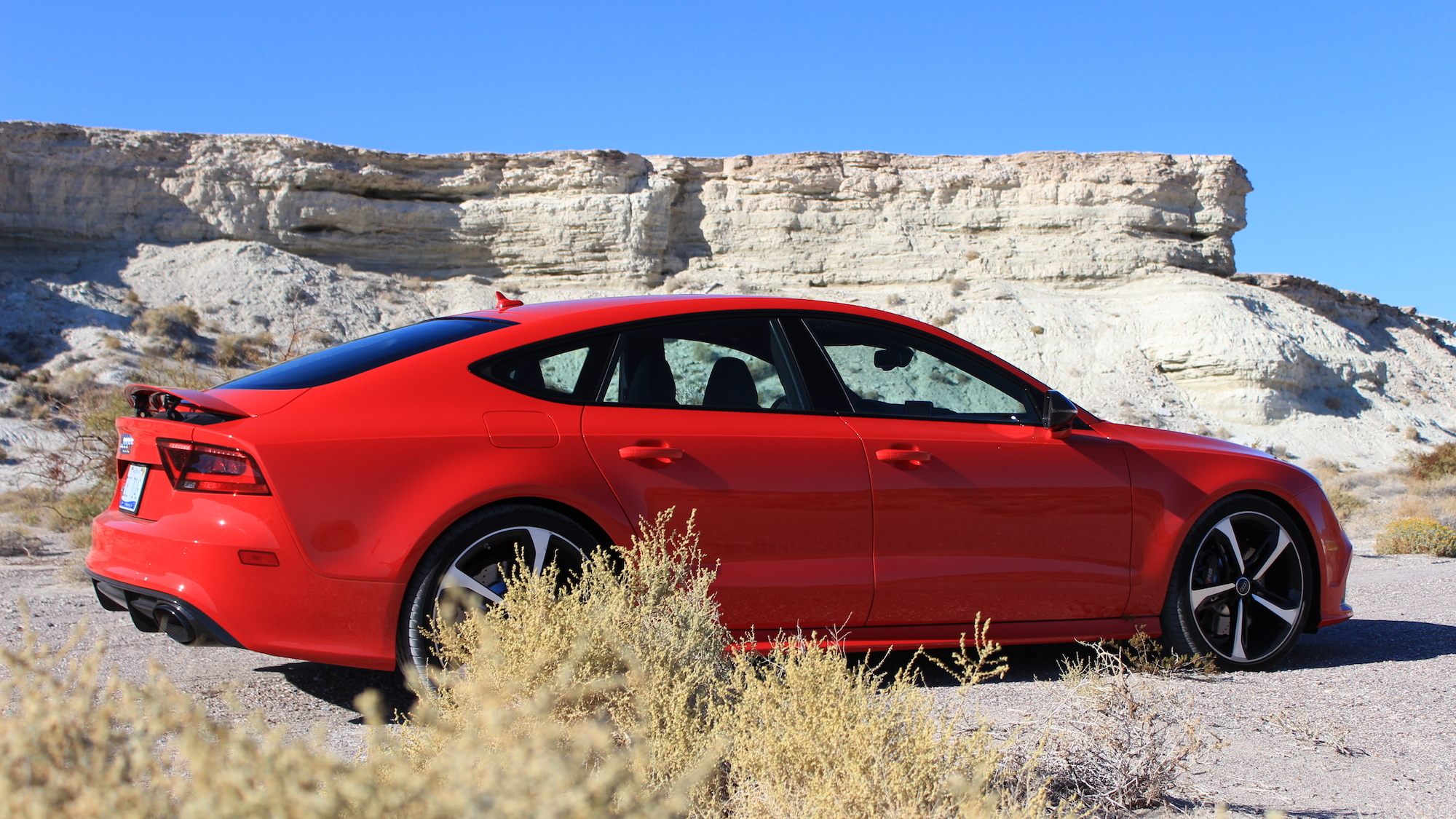 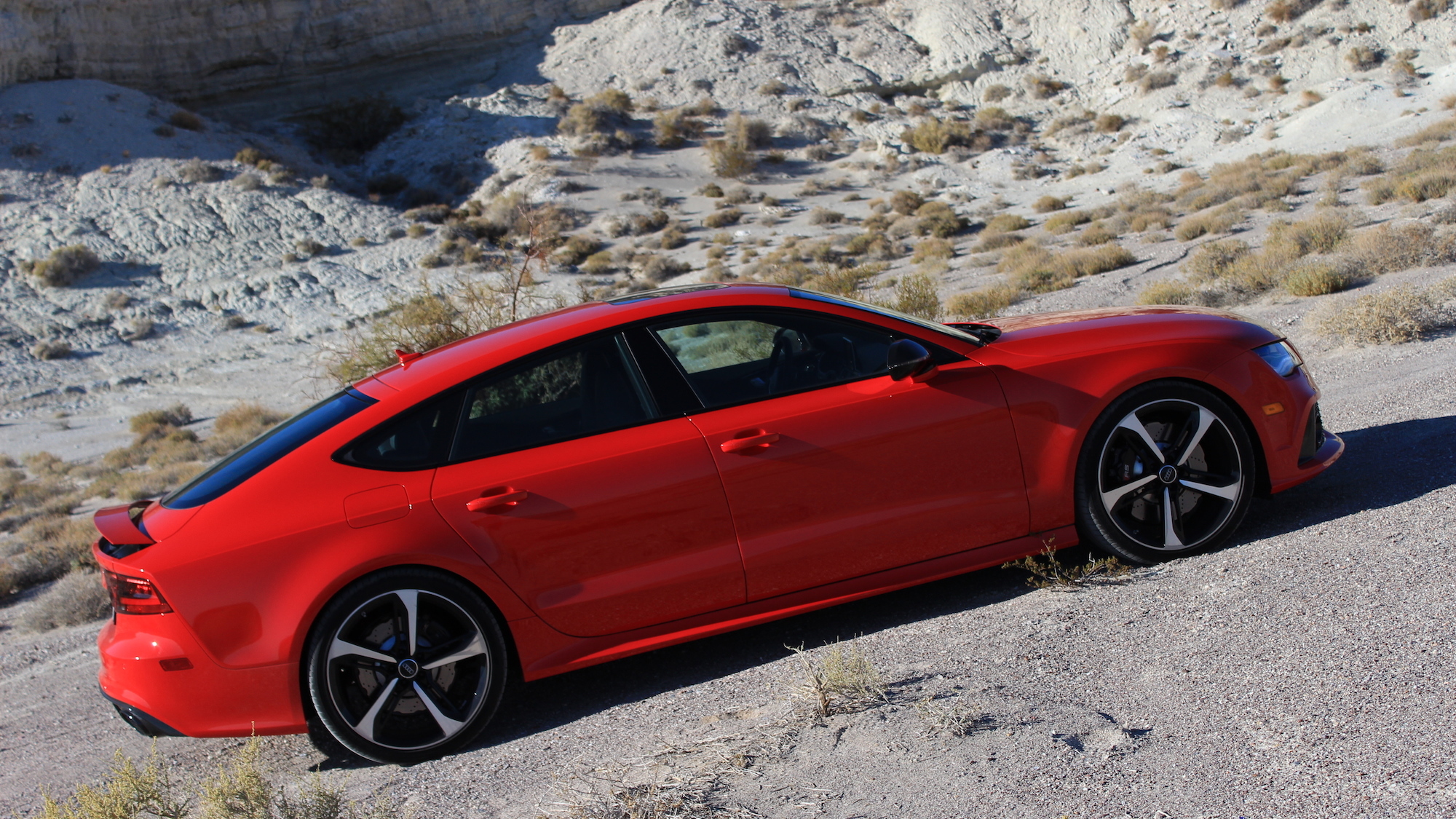 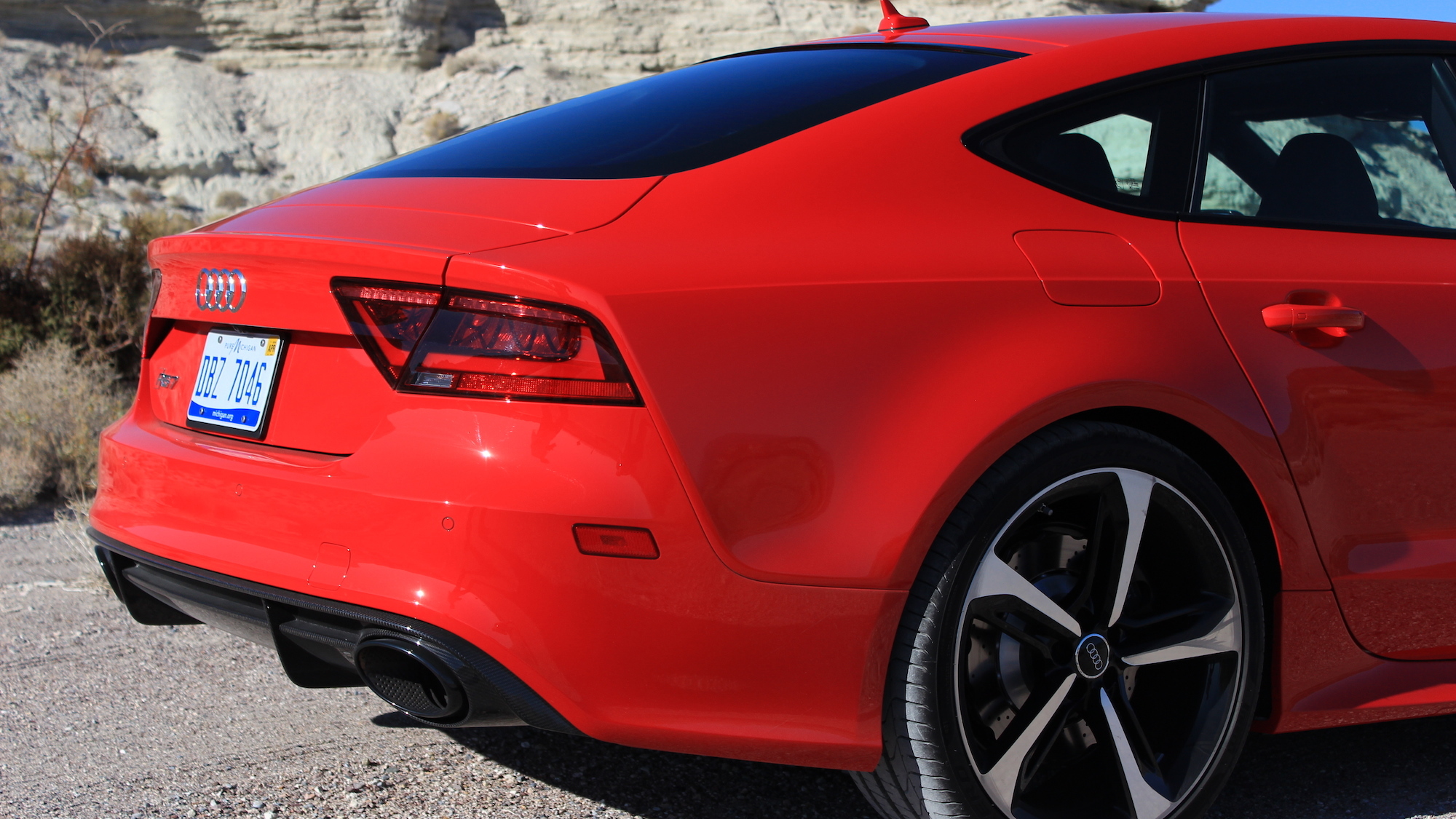 22
photos
There are many luxurious sedans on the roads these days. There are even many very fast ones. There are a few that do both luxury and the performance exceedingly well. But none of them look as primally dashing, as sensually satisfying as the 2014 Audi RS 7.

Of course, the RS 7 started with the best-looking luxury sedan in the business, the A7. That leg up isn’t the only thing it has going for it, however. This beauty has brains, and brawn.

But first, the brawn. Fans of the RS 6 wagon Audi refused to give to America might long for the sweet song of a high-revving, high-strung normally aspirated V-10, but those who’ve driven both will find nothing to fault with the RS 7’s force-fed powerhouse.

The 4.0-liter twin-turbo V-8 is rated at a nice, even 560 horsepower, and it feels like it behind the wheel. That’s not to say the RS 7 is raucous or rowdy by nature. In fact, it’s surprisingly civilized—almost as surprised as you’ll be the first time a cop clocks you well into the upper-middle end of the triple-digit spectrum. It’s shockingly fast, but it’s also effortless. It is, after all, the most powerful RS vehicle ever offered in the United States.

Being a sporting version of an Audi, the RS 7 naturally comes standard with quattro all-wheel drive. That, plus the bountiful power under the hood, yield 0-60 mph times of 3.7 seconds. That’s as quick as a 2014 Chevy Corvette Stingray, despite the RS 7’s extra thousand pounds of curb weight. The standard RS 7 will keep on pulling, like a freight train dropped off a cliff, until it hits its 174-mph limit; opt for the Dynamic Pack and the curtain doesn’t drop until 190 mph.

Audi keeps all of this power application civil in part through its use of a ZF-sourced eight-speed automatic transmission. Why no dual-clutch you ask? The answer is simple: too much torque—516 pound-feet to be exact. And all of that torque arrives at just 1,750 rpm, and stays there until 5,500 rpm. That’s a big, flat plateau of torque, and torque means fun.

Back to that automatic transmission. It’s unhurried and so transparently civil, you might think you were driving a standard V-6 A7 until you decide you’re in a hurry. Then the gearbox steps up its pace to match, supply quick shifts either on its own or via the steering-wheel paddles.

It’s not just the gearbox that’s smart, however. The computer-controlled torque distribution through the quattro all-wheel drive system starts at a static 40:60 front-to-rear bias. From there, depending on grip, dynamics, and a zillion other factors per second, the system will pipe up to 70 percent of torque through the front wheels, or up to 85 percent to the rear. It does this seamlessly, smoothly putting power where you want it, pulling you through and out of corners like it’s half its actual size.

On to the beauty. The RS 7 is one of the most pleasing cars to look at built this year. There’s simply no unflattering angle, detail, or protuberance to be found, inside or out. Opt for the carbon package and you can add a subtle touch of menace for those with sharp eyes, but outwardly, the RS 7 just looks like an A7 with a certain edge.

Inside, the RS 7 gains some performance touches, but it’s the high-end trim on offer that will really wow you and your next set of passengers. One of our favorites is the black oak and aluminum sandwich material that looks as sharp as a fresh tuxedo, but feels as durable as a ship’s deck.

Of course, you’ll also find all of the electronic and infotainment amenities you’d find in any Audi, from MMI to Google Earth Maps to an RS-tuned air suspension and all of the driver-aiding safety gear you could want. Despite its massive performance, drop-dead gorgeous looks, and fantastic equipment, the RS 7 starts at just $105,795.

If it sounds like the 2014 Audi RS 7 is a do-it-all  wonder machine, that’s because it is. But it’s up against the very best the industry has to offer for our Best Car To Buy 2014 award. Will the RS 7 have what it takes to come out on top? Find out on November 12.