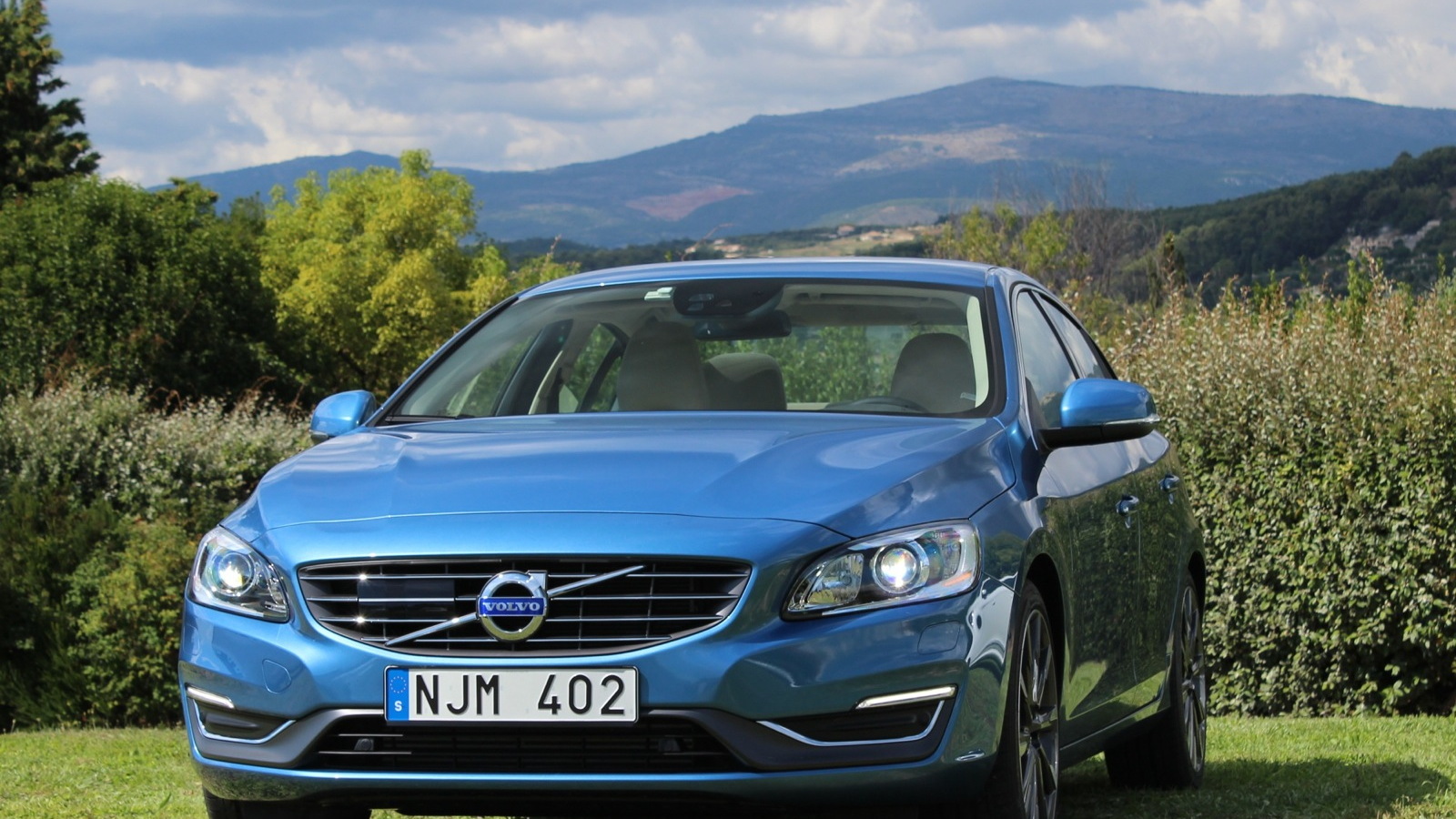 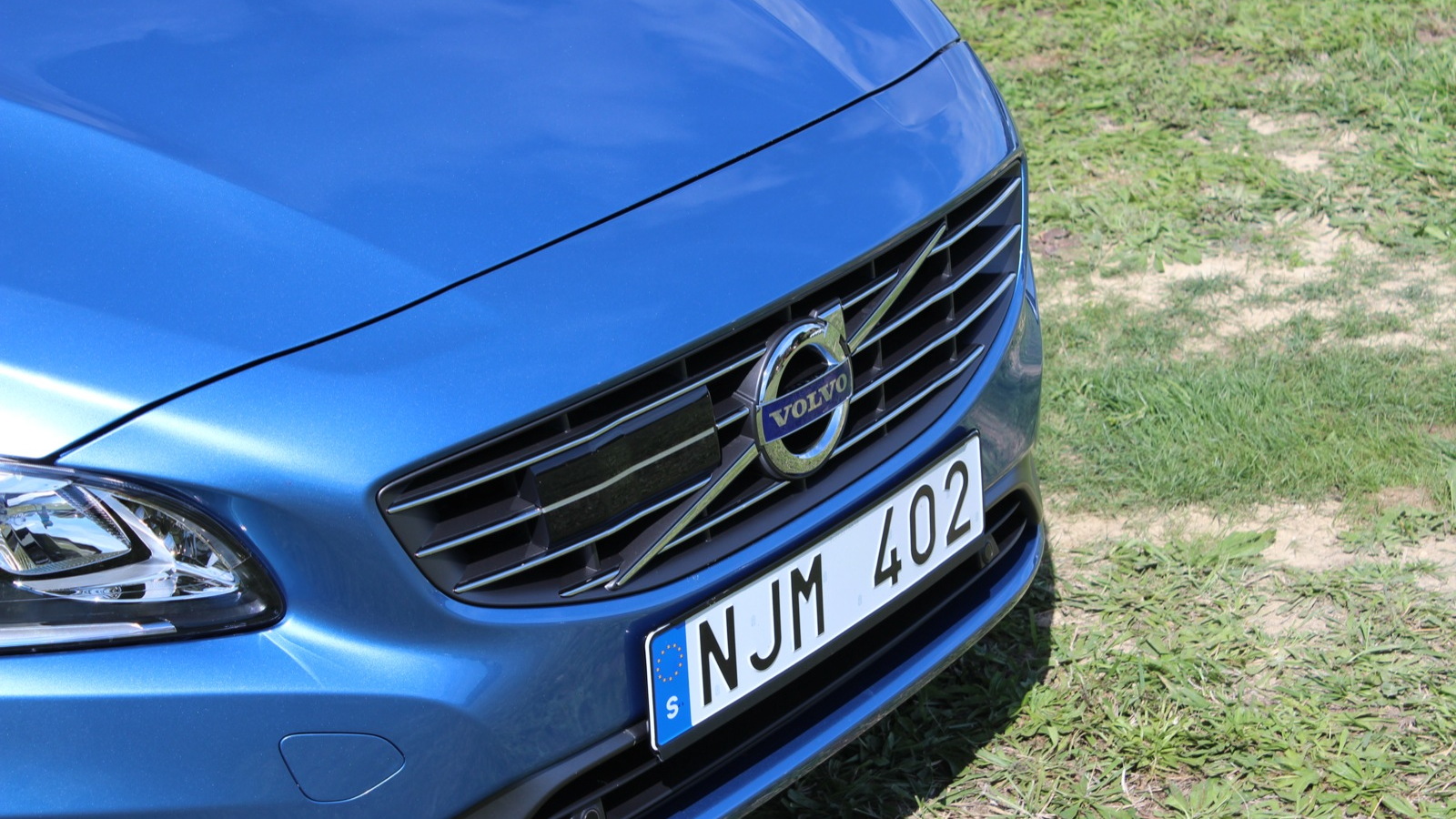 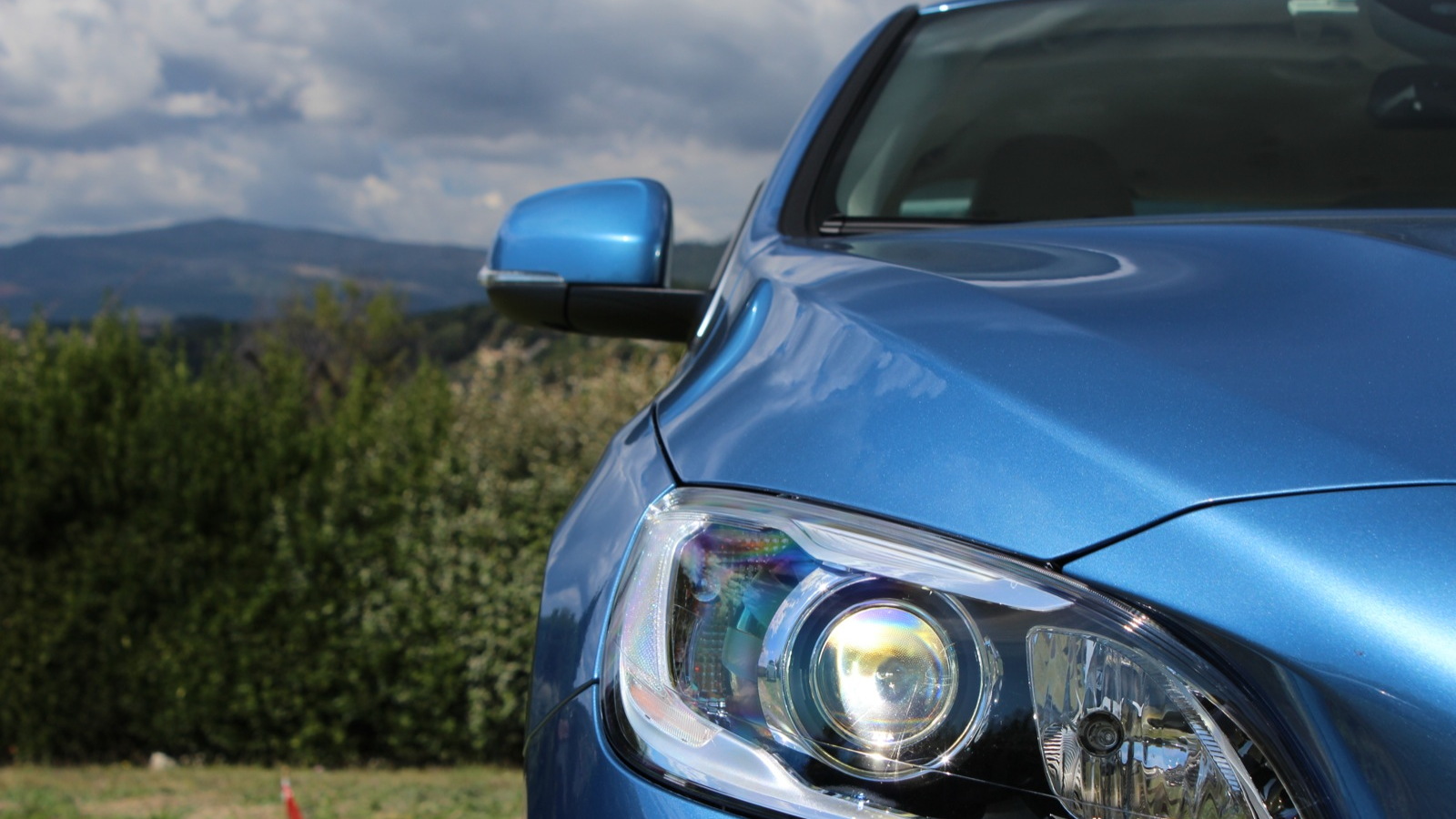 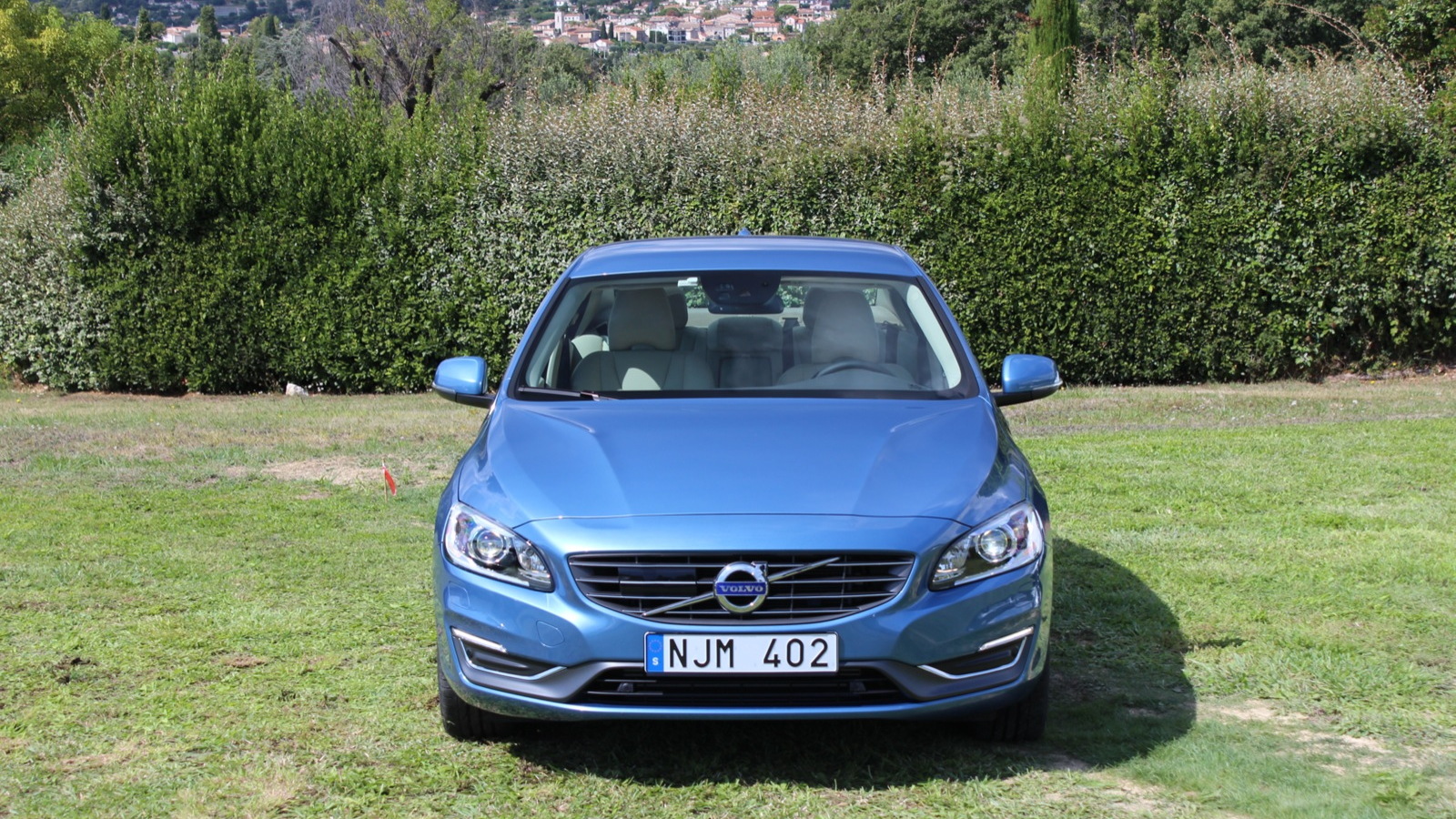 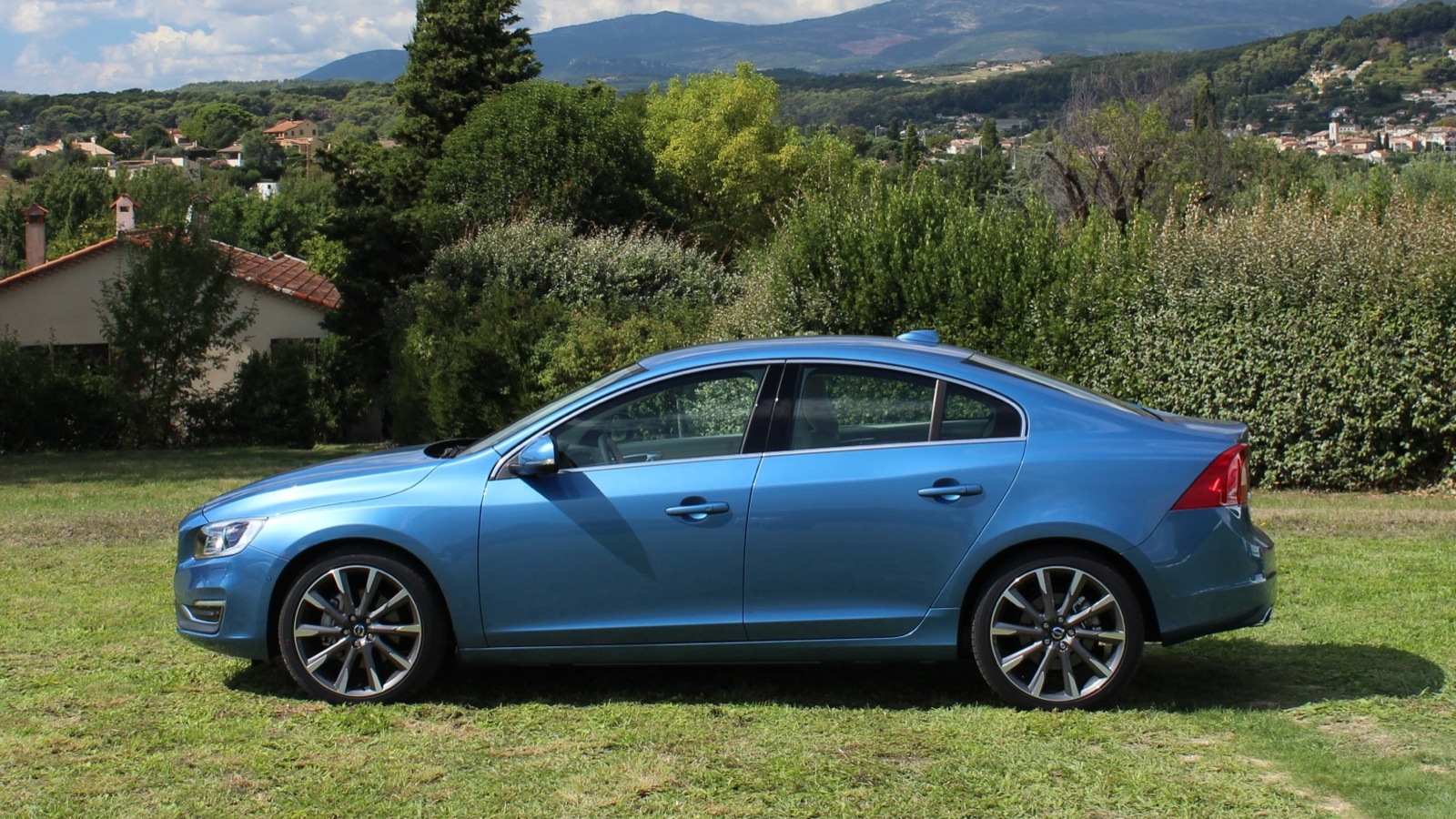 43
photos
Zooming upward on a ribbon of road, along a cliff wall, between tight hairpin curves and breathtaking views in the mountains of Southern France, I goose the accelerator from about 2,000 rpm and hear a series of sounds that’s entirely foreign, especially in a Volvo: the wail and whine of a supercharger, overcome as the revs rise by a throaty four-cylinder note that’s then interrupted by the faintest wastegate sounds as I lift off, and click the steering-wheel paddle shifter with my left hand before the next hairpin.

What we’re experiencing is the first of a completely new generation of Drive-E engines designed and built by Volvo (in Sweden); and over the long term, if they prove as strong, smooth, and versatile as what we sampled—and as fuel-efficient as Volvo hopes—it could make the brand more a viable contender against the likes of the Audi A4 and Mercedes-Benz CLA (as well as anticipated rivals like the upcoming Acura TLX).

Before you get too excited, we need to attach an asterisk to this. Okay, several. This new engine won’t be offered until early next year, likely on early 2015 models; and for now it’s only offered with front-wheel drive.

As part of a plan to phase out all of Volvo’s existing in-line five- and six-cylinder engines, which have served Volvo well but date back to the early 1990s, the new super-turbo-charged engine makes a lot of sense, from the standpoint of maximizing performance with miles per gallon in mind. It allows Volvo to bulk up the low-rev torque to six-cylinder levels without moving to a larger turbocharger—which would have made the engine thirstier all the time, say engineers. The supercharger has its effect up to about 3,500 rpm, and like a cross-fade on a mixing board, the turbocharger’s boost is by then coming on strong.

New engines, stop-start, hybrids: all on the way

While that engine, making 302 horsepower and 295 pound-feet, is slated to be the top T6 engine for many of Volvo’s models, like the S60, XC60, and soon-to-arrive V60 wagon, the mainstream T5 engine will be a 240-hp gasoline four that’s merely turbocharged (not supercharged) but has a short-duration overboost mode providing 280 lb-ft of torque (258 lb-ft otherwise).

Across the board, Volvo is also phasing in a new eight-speed automatic transmission with the new engines, replacing the existing six-speed and allowing a wider span of ratios. Engine stop-start is included (in our test car it was definitely less noticeable than BMW’s system), and these engines are poised to take on a variety of future electrification options (to be used in the XC90), from starter-alternator mild hybrid systems to electric motors at the rear wheels.

And if you didn’t catch the reference, paddle shifters, a feature remarkably absent from the entire S60 lineup until now, have been added for 2014 as well. Likewise, the sport seats that Volvo offers in those upgraded models have more aggressive side bolsters and somewhat longer thigh support yet retain their all-day comfort.

Again, hold your horses; while the new engines and transmission are slated to begin arriving in early calendar-year 2014, the paddle-shifters and upgraded sport seats have already arrived, for the 2014 model year. So has a new face that brings a bit more elegance and charm, with light horizontal brightwork at the grille, a resculpted hood, different lower aero work, and headlights that look just a little more upright. In back a new exhaust outlet is the only change versus outgoing 2013s.

Inside there’s more change, though. One of the most noticeable differences is right in front of the driver; most of the S60 lineup now gets a TFT instrument panel in which you can select from three different themes: Elegance, Performance, and Eco. The themes have corresponding colors, of course (Eco is green, while Performance paints the night red), but they also get an entirely different layout—especially in Performance, where the inner rim of the central ring turns into a tachometer, with a digital speedo in the middle.

Somewhat deceptively (to us, in this era of drive modes), the themes are really just themes—psychological enhancements, perhaps, or call them what you will—and produce no difference in steering, powertrain, or suspension. But if you slide the shifter over to the 'S' (sport) gate, then you get not only full manual control of shifts but also edgier throttle response. Volvo has at last added paddle-shifters (they’re standard on the T6 models and optional on the T5 with the Sport Package), but it still thinks that full throttle should override your manually selected gear, however (we hope Volvo enables that in final-spec versions of this new so-called Drive-E powertrain).

We expected safety leadership in Volvos, and we get a broadened suite of accident-avoidance aids in the 2014 S60. Several new radar-based features have been added to support the automaker’s Blind Spot Information System (BLIS). A Lane Change Merge Aid acts as a proactive supplement for blind spots, while the Cross Traffic Alert warns you of approaching vehicles as you’re backing out of a spot. Lane Keeping Aid now gives you a haptic warning in the steering wheel.

Getting down to performance

Based on a couple of hours tackling some very demanding roads, we have no doubt that the new Drive-E four is strong enough for the T6—and to replace the existing turbo six. Volvo cites preliminary 0-60 times of 6.0 seconds for the 240-hp T5 and 5.6 seconds for the 302-hp T6; and these engines should be far more fuel efficient than the outgoing fives and sixes; Volvo estimates a Combined 29 mpg for the lower-output engine, while the top T6 should be well into the 30s on the highway.

Compared to the previous six-cylinder T6, the 2015 T6 (in Euro spec) loses 95 pounds in total engine and gearbox weight in moving to the new high-output four; meanwhile the new T5 model will save about 33 pounds compared to the outgoing turbo five.

Wringing this new engine out in the S60, we noticed a few things: It has a lower redline (just 6,000 rpm, with a brief overrun allowed to 6,300), so it feels like you run out of revs quickly in the lower gears. And at the lower revs, with the supercharger singing, there’s a bounty of torque flowing through the front wheels—and not surprisingly, a bit of torque steer.

Steering is confident, has a good sense of center, and loads up nicely off-center, even if it is completely numb given the sport-sedan context. On T6 models (when you’re stopped), through a ‘MyCar’ menu, you can click into three different levels of steering effort; we found the difference between the three quite subtle.

As much as the S60 gets our pulse going with its sport-sedan look and feel, it doesn’t from the driver’s seat encourage you to go faster in turns; rather, it scrubs off speed in front, in the safest of ways. With the front-wheel-drive S60 we drove—in Euro T6 spec, with the equivalent of a U.S. R-Design suspension—those tendencies were out in full fashion, but we found that giving the steering a flick more angle at initial turn-in for those tightest turns yielded surprisingly positive results. We'll call it a dynamic workaround.

Where we expect the S60 to arrive at its zenith, however, is with the new engine in all-wheel-drive form—which, sadly, isn’t here this year…or next year.

Want AWD? Why you should wait

The 2015 Volvo V60 wagon breaks right into the U.S. market in January with the new roster of engines—with front-wheel drive, that is. Meanwhile, Volvo will be left clearing out its existing stock of front-wheel-drive five- and six-cylinder models for the S60, as well as the XC60. All-wheel-drive versions with the new engine are still a couple of years away (expect, in this confusing time, that AWD models with the older engines might cost about the same or even less than the front-drivers with the newer, more efficient engine). But by sometime in calendar-year 2015 Volvo will have completely phased in the new engines and will be an all-four-cylinder automaker.

Volvo was wise not to change all that much about the 2014 S60 aesthetically. Just as we’ve found all along, the current S60 is not a car that sells itself in feeling particularly edgy or focused from the driver’s seat; rather, it’s the stark Scandinavian design statement, safety, and relatively simple but tech-advanced interface that sells the S60—along with great ride comfort and a quiet cabin no matter which model. With performance that remains as capable as before—but with improved efficiency—we say bring it on. These new models can’t arrive soon enough.