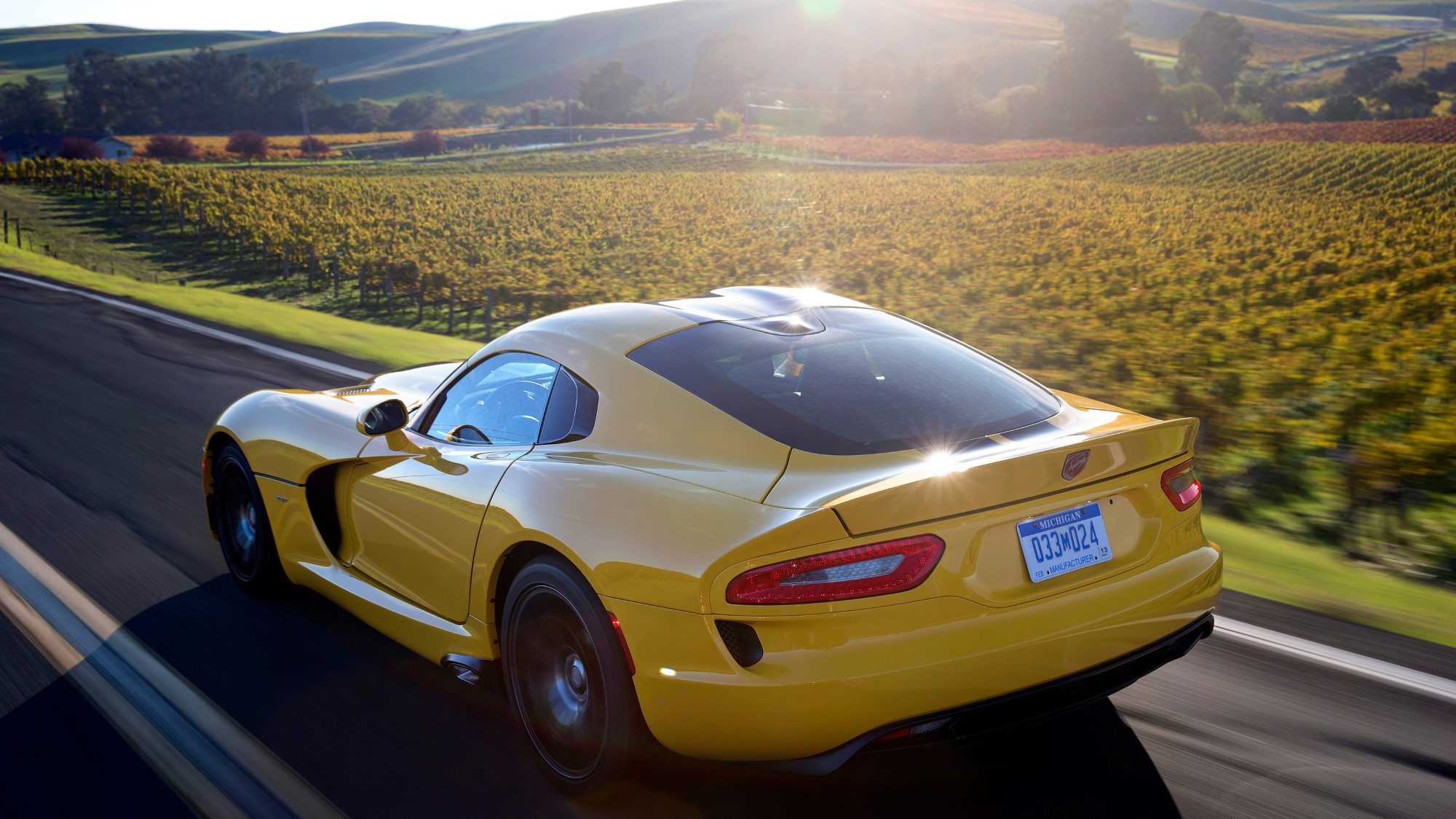 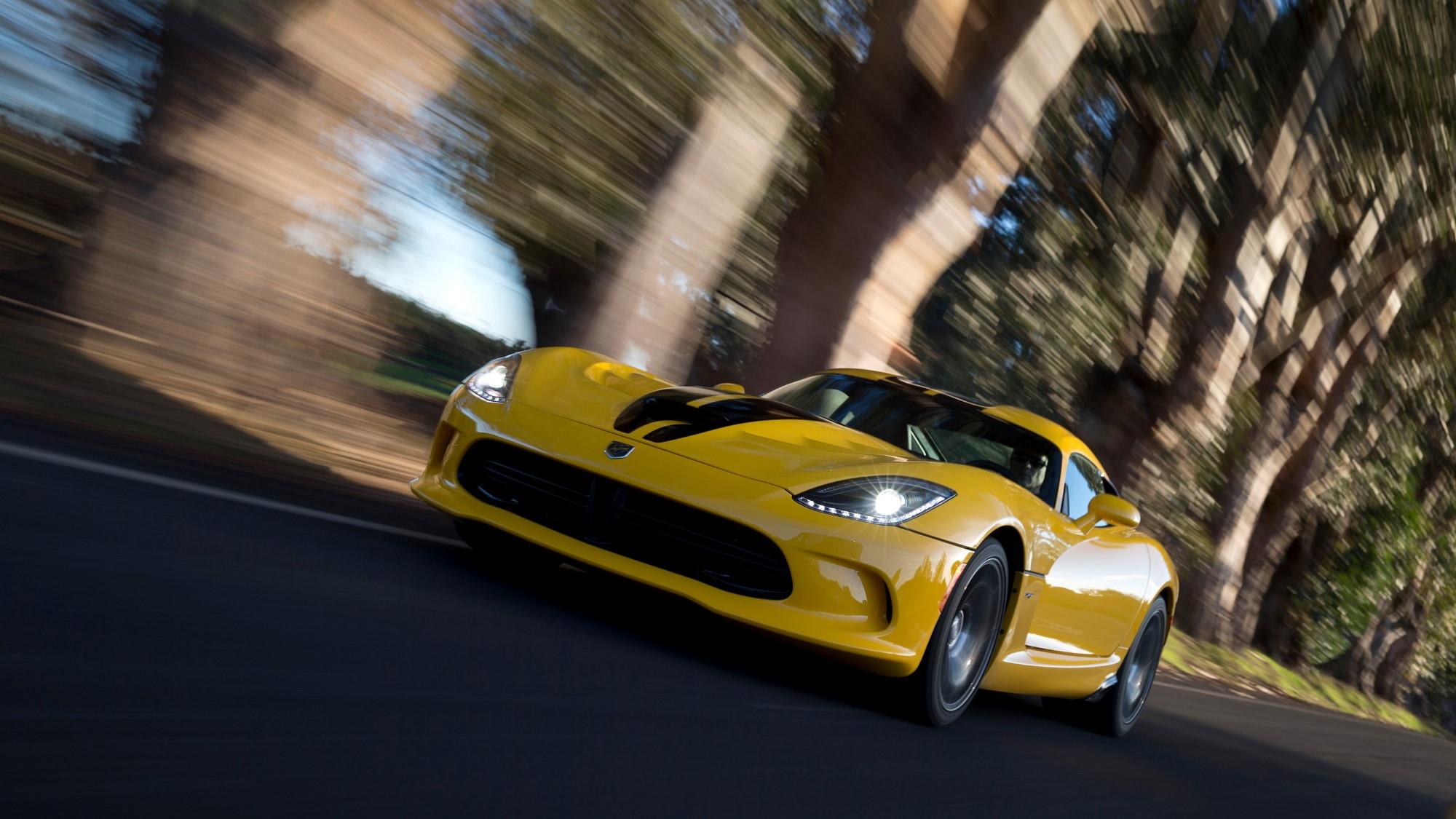 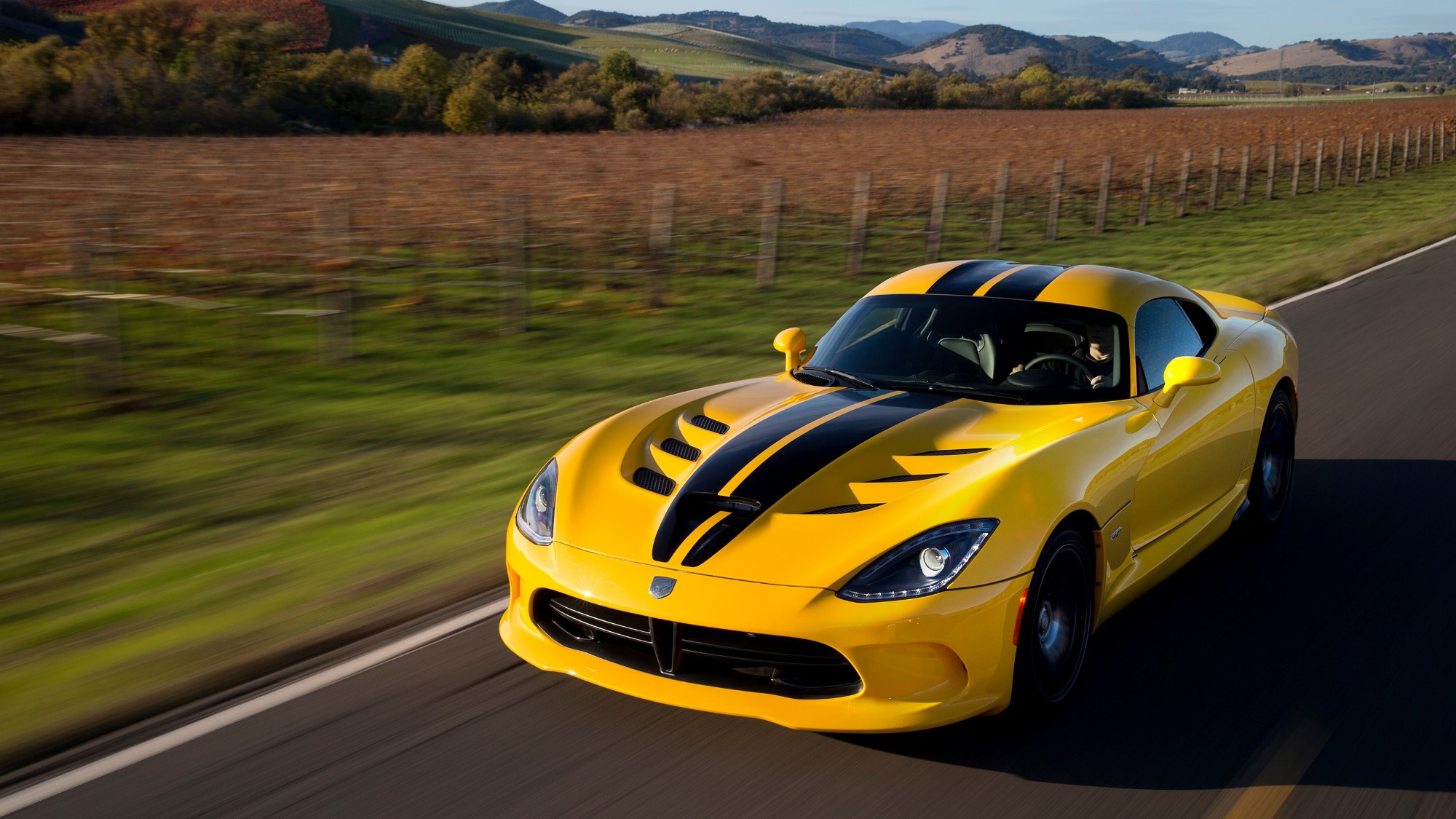 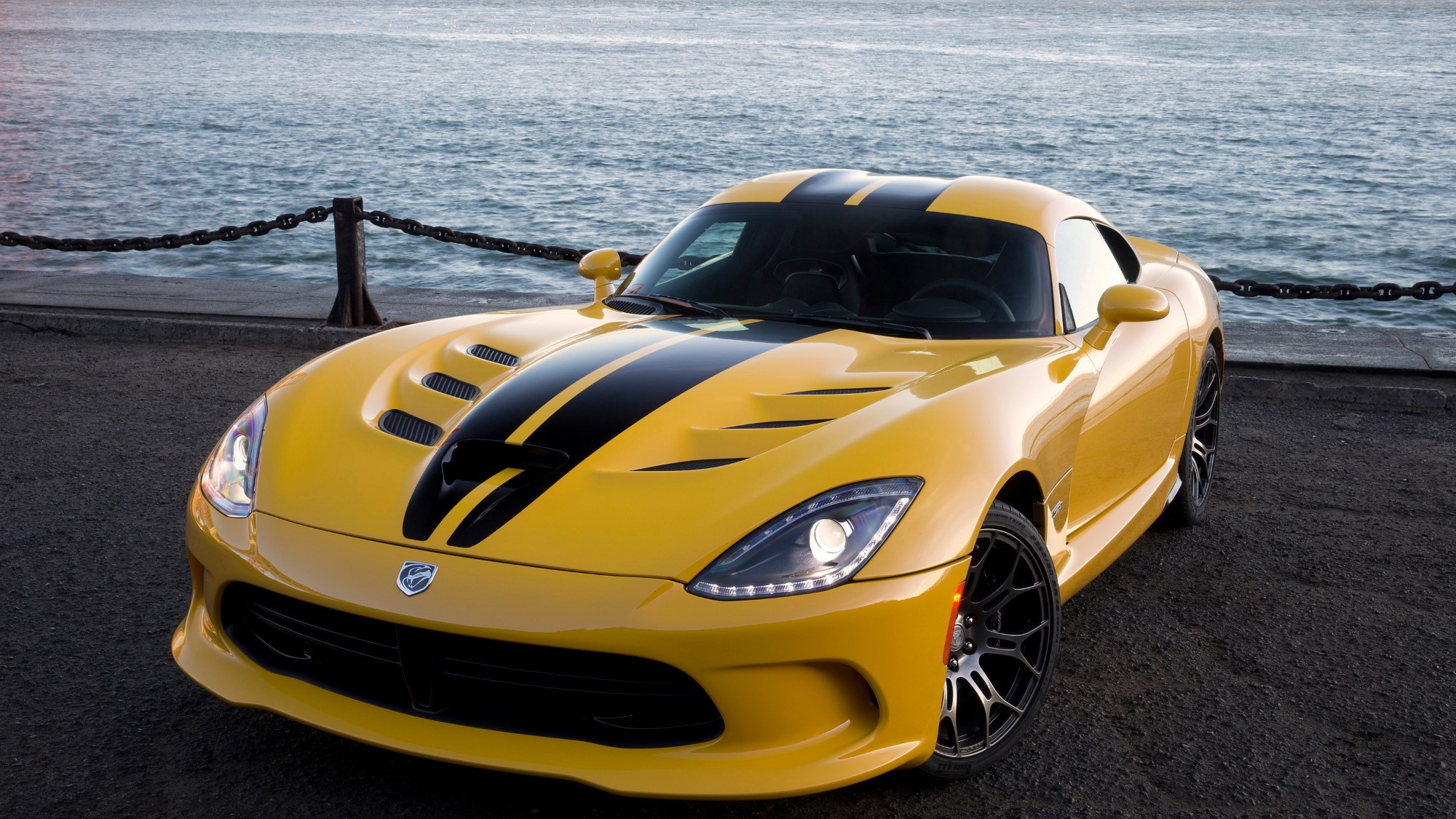 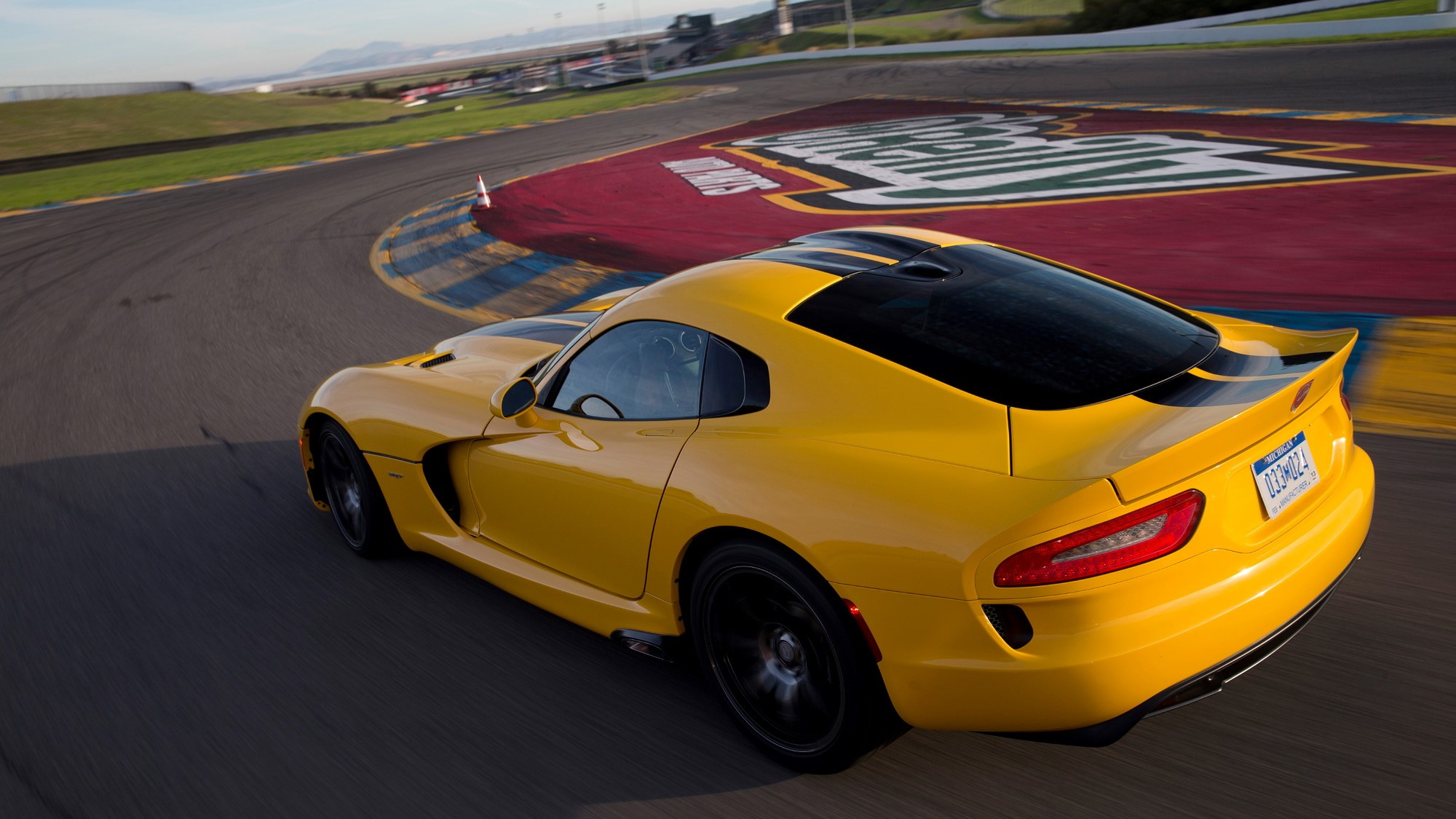 Bobbing and weaving through the vineyard-dotted hill country around Napa, windows down on a perfect fall day, the sun settling just behind the nearest ridge, a massive 8.4-liter, 640-horsepower V-10 growling out an atonal bass note to complement the music flooding out of the stereo, it's easy to gloss over imperfections, forget the odd inconvenience--even forgive one's enemies.

But it's not all rose-colored tarmac from behind the wheel of the 2013 SRT Viper. Unless you're on track, that is.

You see, the 2013 SRT Viper is almost completely different from the old Dodge Viper, and yet it's almost exactly the same.

Rough, loud, and bit short on passenger room in the cabin, the Viper is still very much a rough-and-tumble sort of supercar. It doesn't make many allowances for creature comforts--despite the large, high-res screen mounted front and center in the now-leather-swathed cabin. It certainly looks much better, especially inside, and it is far more technologically advanced (and, in its own way, refined) than the last Viper. But it's still a beast.

The valvetrain of the mid-front-mounted V-10 engine, for example, will become a dear friend--or an unwelcome guest--after just a few minutes in the cabin, especially if you're cruising just above the Viper's preferred near-idle rpm range. A common malady of high-performance mid-engine cars (which the Viper truly is, with the entire block behind the front axles), it's no less noticeable or, at times, annoying, here.

The exhaust note, likewise, will either stir your soul or stir your passenger's ire, drowning conversation beneath its roar under moderate to hard acceleration. That is, of course, provided they're still talking, and not completely absorbed with hanging onto the newly-added passenger grab handle on the center console.

But once you make the transit from your ultra-modern wine-country hotel to the track, in this case Sonoma, you experience a total perspective shift, and you finally understand the Viper. You can now speak its language, and it can speak yours. It's a homecoming.

That's never more evident than when talking with the SRT team behind the Viper. Each and every member, from engineering to communications, is visibly excited by and about the 2013 SRT Viper. These guys and gals are true, dedicated, and highly capable gearheads. And it shows in their product.

Changes for the 2013 SRT Viper are multitudinous, but also minor, if taken individually. Each and every part of the engine has been massaged and enhanced, sharing almost nothing with the 2010 Viper's statistically identical engine. The sum of the changes, however, is an increase to 640 horsepower instead of 600 (and the engineers think it's underrated at 640), 600 pound-feet of torque, new engine control electronics that enable some shockingly advanced and capable traction control, and, mated to a new closer-ratio gearbox and 3.55 (instead of 3.07) rear-end ratio, truly impressive acceleration at almost any speed.

In fact, the Viper's top speed of 206 mph is now reached in sixth gear, not fifth. And yes, it's only available with a six-speed manual transmission.

That transmission is equipped with a new short-throw shifter that remedies much of the previous Viper's long, heavy throw issues, but which still isn't quite a delight, especially in track driving. Somewhat imprecise and not entirely intuitive, the shift lever's plane isn't perpendicular to the center tunnel, but inclined toward the driver, presumably for ergonomics. If trying to shift while still loaded on the exit of a corner, however, it can be difficult to find third gear at times.

That's not a problem unique to the Viper, however, and it hides a fact about the 2013 model that only those who've experienced the 2010 might realize: yes, you can be on the power while still laterally loaded coming out of a turn. In fact, you can be very hard on the power.

Part of that is due to the re-engineered rear suspension geometry, which relocates the toe links ahead of the spindle and adds some mild compliance (bushing) toe-in in place of the static toe-in and dynamic toe-out. It's also due, in part, to the bespoke tires offered on the Viper. For the track addicts, Pirelli's P Zero Corsa is the choice, providing massive grip, and, with 295/30/18 tires up front and 355/30/19 tires out back, just the right balance between cornering and power application. But part of it is due to the new traction control system.

While we had feared the addition of traction control, now mandatory in the U.S., would vitiate the Viper's vituperative character, it has merely taken it to finishing school. The 2013 SRT Viper's traction control is, put simply, brilliant. In full-on mode (the only mode available besides full-off in non-GTS models), the Viper's traction control is ready for the track. It allows more wheel slip and yaw angle than you'd expect both on corner entry and exit, and when it does decide to step in, primarily when you're on the gas a touch too early, it does a remarkable job of not getting in the way, but enhancing what you're trying to do. This sort of traction control isn't unheard of, but it's certainly rare--and refreshing to find on the Viper.

In GTS models, which start from $120,395, there are two intermediary steps (Sport and Track), each progressively less intrusive until you reach the fully disabled mode, which relies solely on your inputs to control the car. That's a bit of a risky proposition even in the new and improved 2013 Viper, but it's far less visions-of-death inducing than it once was. But the real kicker here is you'll never likely need to turn the traction control fully off--it's just that good. In fact, the SRT team--many of them accomplished racers themselves--say they'd race the car in Track mode. We believe them.

Of course, the GTS isn't the Viper we'd pick for ourselves. Our tastes lead us to the standard $97,395 SRT Viper with the optional SRT Track Pack, which adds the Pirelli P Zero Corsa tires in place of standard P Zeros, two-piece StopTech brake rotors with Brembo calipers, ultra-lightweight Sidewinder II wheels (the 19x13-inch rears weigh just 23 pounds), and subtracts 57 pounds of weight in the process. The standard Sabelt sport seats don't need any upgrading, though you can spruce up the materials with Nappa leather and Alcantara (standard equipment on the GTS) and red seat belts if you like.

Put that combination on track for a handful of hard laps as we did at Sonoma and you'll come back to pit lane with a perma-grin and some stories to tell.

Balanced, incredibly fast, and surprisingly nimble, the 2013 SRT Viper is, without question, bred first for the track, then homologated for the road. Details like the carbon fiber hood, roof, and trunk, the magnesium bulkhead, the roof bubbles that allow helmet clearance for taller drivers, even the fender wells cut away for easy access to the dampers--these might all tip you off that the SRT team had track time in mind when they designed the Viper. But it's the experience itself that removes all doubt.

Push the car hard into a corner, braking late, slowly releasing the pedal as the car rotates into the corner (again, with traction control still fully on), and you'll notice the front end's newly awakened feel and feedback. That big X-brace in the engine bay isn't just for show--it adds stiffness that translates directly into more precise steering and more informative feedback. No longer are you following the nose into the corner, you're rotating the whole Viper through it.

Transition to mid-corner and the car's innate balance becomes obvious. On a fast left-hand sweeper like the 120-plus-mph uphill entry to Turn 1 at Sonoma, you're just maintaining throttle, holding the car at maximum lateral grip as it tells you what each corner of the car is doing.

Settle the weight side-to-side and nail the brakes. It requires more substantial leg force than some cars, but again, the feel is remarkable for a street car; the pedal stroke is relatively short, but there's a progressive ramp-up in pressure right to the point of ABS, enabling repeatable, predictable threshold braking. In fact, even when trying, we only managed to get the SRT Viper into ABS at the end of our three-hour session on track in a non-track-package car with the less-grippy non-Corsa P Zero tires equipped--and that was likely down to the hot tires losing grip as much as anything. With the P Zero Corsa tires on a mildly warm, dry day, engaging ABS is nearly impossible without hanging a tire in the air.

Back to power at corner exit, the huge rear tires communicate well when they're ready to start moving forward instead of turning, and a rapid but smooth application of full throttle, even in second gear, won't break them free--or require intervention from the traction control algorithms. Shift up the gears, and the forward thrust is immediately comparable to a Sovereign-class starship entering warp speed.

Mix all of these pieces together and you have a 3,297-pound, 640-plus-horsepower supercar that shrinks around you to enable lap times and driver control in a way few other cars can, or even would if they were truly unleashed.

And that's with a stock car, as delivered from the factory, with traction control fully on. For right around $100,000.

The previous Dodge Viper already has production car lap records at a number of the world's great circuits. The new one will beat it handily--and likely anything else the world throws at it. It's that good.